The e-bike scene boomed over recent years with startups challenging established companies in this unique sector of the transportation market. Some designs enhance the energy of a rider pedaling, using an electric motor to offer a slight boost and making multiple gears unnecessary. Others act more like electric scooters, possessing the power to push the biker along without human effort thanks to a throttle. A myriad of form and function awaits whatever an individual rider’s needs might be.

Still, in a phenomenon that seems to defy the law of supply and demand, more brands and sizes of electric bikes have not resulted in more affordable prices. As popular and pervasive as the e-bike became in the last decade, even as new companies entered the fray year after year, the MSRPs of these fun and convenient machines still run as high as the mid-four figures for general consumer makes.

With that in mind, an electric bicycle is not a casual purchase for most riders. It takes some serious consideration and research. We surveyed several electric bikes over recent weeks and chose a handful of options for various types of riders. If you find yourself and your riding preferences in this mix, we stand behind our recommendations. Take a look at our list of the best electric bikes below.

BEST FOR THE FITNESS ENTHUSIAST

While some e-bikes do most of the laboring for you, the GoCycle GX works with its rider without taking over the act of pedaling altogether. Once you’ve straddled the GX, it’s on you to get it moving and keep it moving — but you’ll get some quality help along the way.

A purely pedaled bike, like your favorite 10-speed, shifts up through those 10 gears as you accelerate. The GX uses a three-speed mechanical twist shifter connected to Shimano Nexus gearing. As you pedal, the electric motor makes up the gap for the three-speed gears where your 10-speed’s gears would otherwise be.

The lithium-ion battery is wired up to that electric motor and gear system. The drive elements are monitored by GoCycle’s Pedal Torque Sensing which detects when you need electric help to maintain speed in any of the three gears. If you need a little boost to get up a hill or clear an intersection, the left grip holds a throttle trigger that engages the motor on demand.

This is all a long way of saying the GoCycle GX helps you ride, but you still do the bulk of the work. That makes this option the most appealing to fitness-minded bicyclists. The GX offers a 40-mile range on a six to seven-hour charge to keep even the most dedicated rider rolling through the day’s workout. Its ergonomics are workable for an experienced rider, and its light aluminum frame is a lot of fun to throw around on the road. 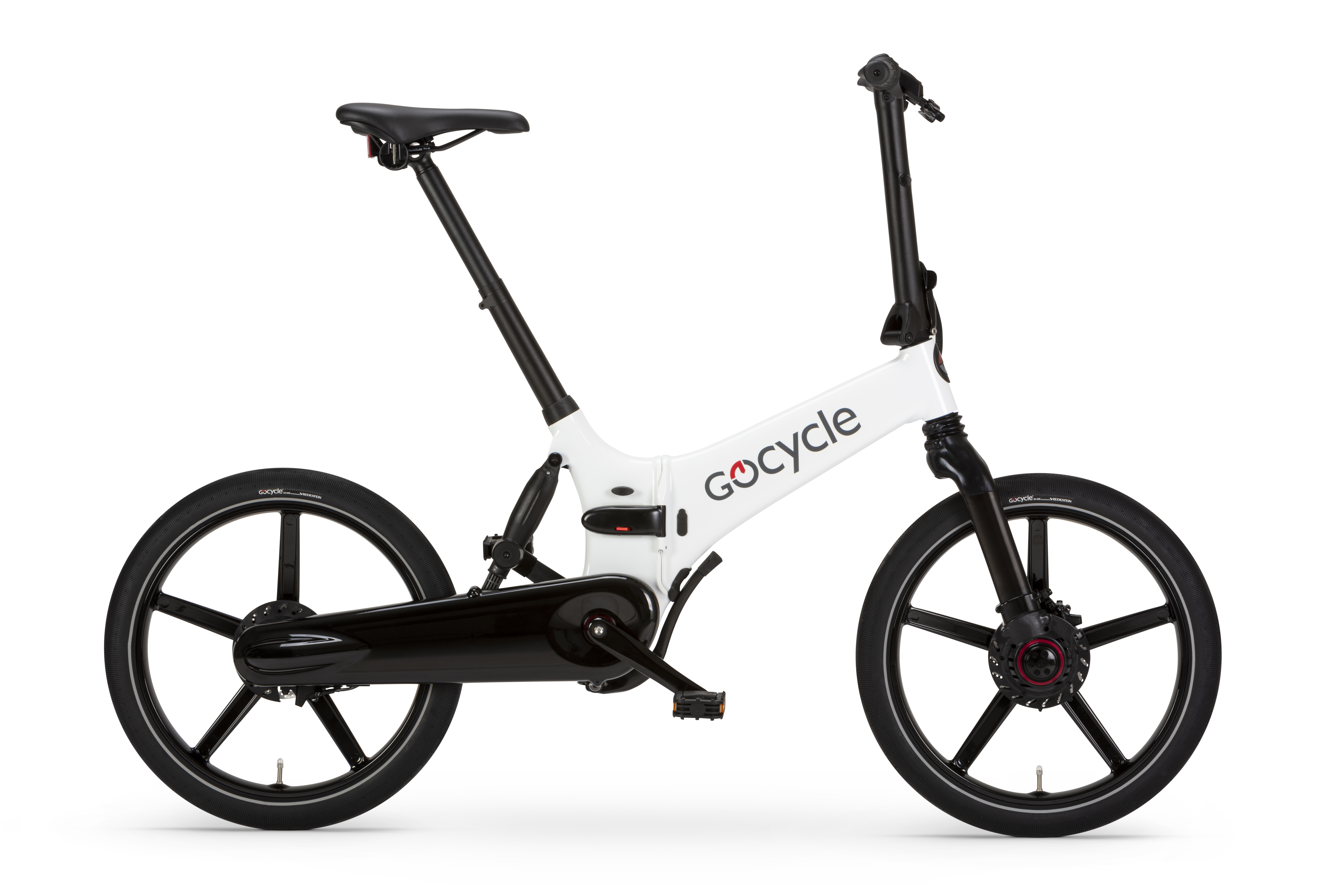 BEST FOR THE TECH-MINDED RIDER

VanMoof might not be a well-known brand in the U.S. yet, but they’ll get there. Right off the rack, there’s an aura of elegance and European modernity about the VanMoof S3 with its simple, clean lines and traditional ergonomics. Its understated aesthetics hide the S3’s identity as perhaps the smartest electric bike on the market.

The VanMoof offers the e-bike business’s first automatic electronic gear shifting system. That means there’s no need for a handlebar shifter or for you to worry about what gear you’re in when stopped or at maximum speed. The S3 worries about that for you with an onboard Smart Cartridge. That A.I. center controls all systems, including your input as a rider. The onboard processing center watches motor feedback to provide the necessary power and a maximum range of 35 to 90 miles, depending on your speed.

The S3 communicates to its owner through the free VanMoof app. While it’ll help you configure the S3’s gear changing ability and keep riding states, its most important feature is controlling VanMoof’s unique anti-theft system. While this is not an e-bike that’s impossible to steal, it is an e-bike that is pointless to steal. The VanMoof security system packs remote locking, onboard alarms, tamper warnings and smart location tracking. In short, the VanMoof works only for its owner.

With all of its technical advancements, the S3 is a glimpse into the future of bikes and seemingly irresistible to tech lovers. 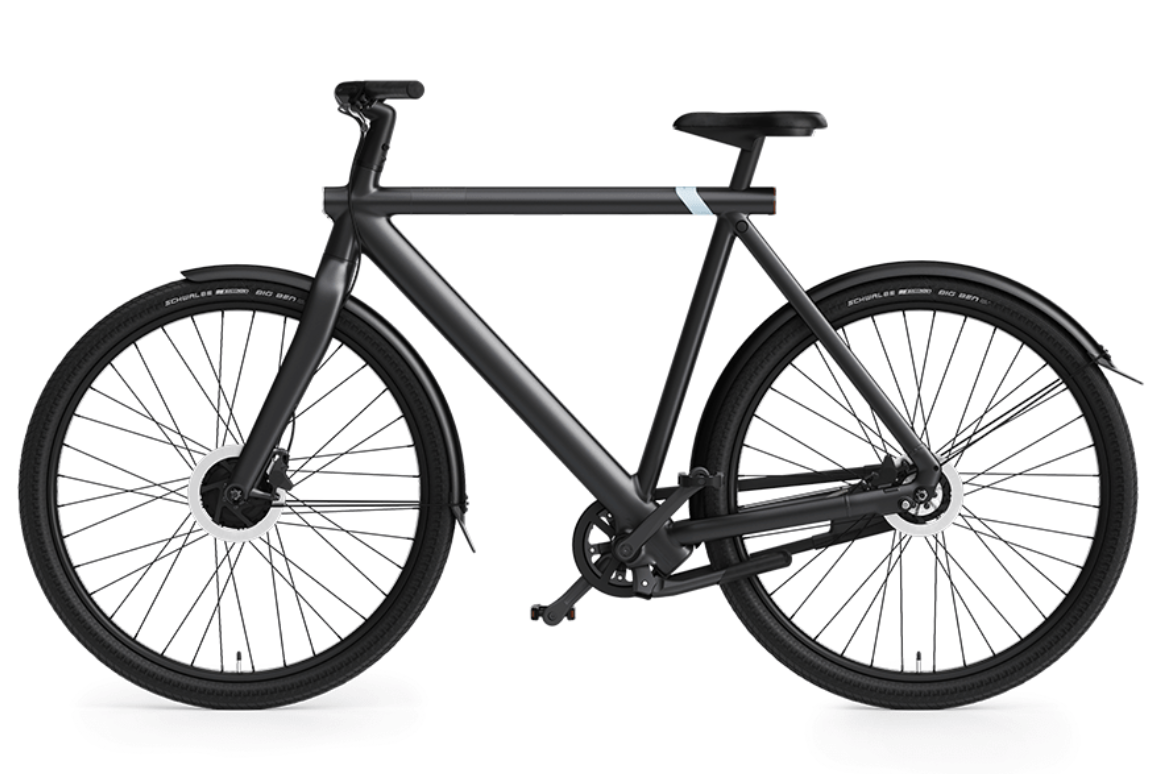 With their throwback aesthetics and signature electric motors that could blend right in next to any 1950s toaster or milkshake machine, there’s no missing any manifestations of Vintage Electric bicycles. The Cafe is particularly striking — an elegant vehicle that would fit in nicely alongside any Rolls-Royce automobile or Van Dam lake cruiser.

The Cafe’s 750-watt, rear-hub electric motor drives the bike potentially faster than other e-bikes on the market. The handlebar-mounted throttle will allow you to matriculate down the road around 30 mph without any need to pedal. That will drain the lithium-ion batteries faster, but a mix of pedaling and electric assistance will produce ranges topping out around 60 miles after a total charge time of about two hours.

The bike’s Vintorque drivetrain technology offers five levels of pedal-assistance, so you can decide how much exertion is on the menu. That mix of power and adjustable settings makes the Vintage Cafe the best option for the casual rider looking for a bike that’ll make life easier. It’s also a great option for the less-experienced electric bike rider transitioning to the life of pedaling via electrical assistance.

The Vintage Electric Cafe is a handsome and very workable option for recreational riding, city explorations, cross country rides and runs up and down the beach. 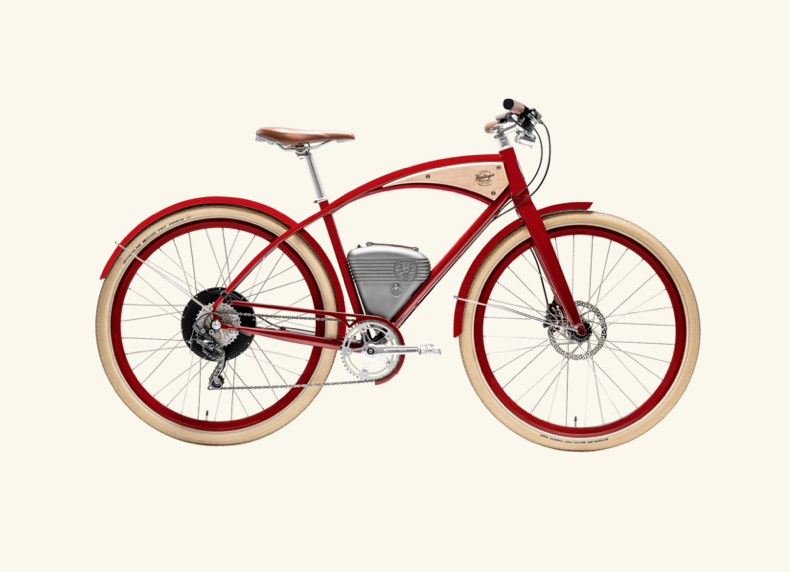 BEST FOR THE COMMUTER

This Tern Vektron S10 can go more or less everywhere you go either underneath you on two wheels or curled up alongside you folded up tight to about one-third of its operating size. Ten seconds of adjustments and a Vektron swivels in on itself. That allows the owner to pack its electrified ride into most cars, any crossover or SUV, buses and trains.

While in the seat, you get to enjoy a Bosch Active Line Plus electric drivetrain capable of producing 20 mph. That motor will aid you in pedaling, but it’s on you to keep moving. That electric assistance rides with you for a tested range of 80 miles on a single charge — a distance the daily commuter is unlikely to touch going back and forth every day. 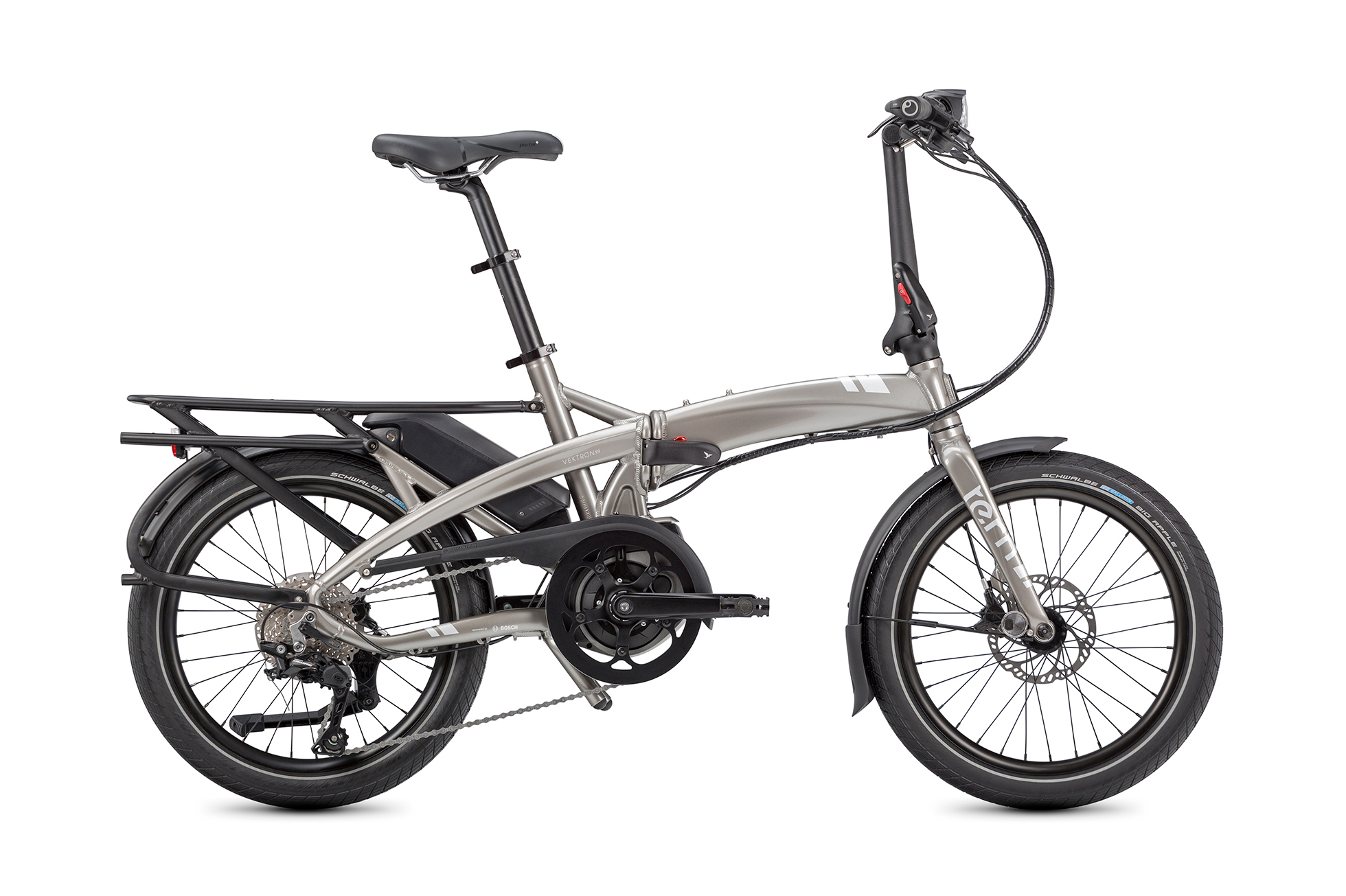 DelFast builds specialty e-bikes for riding enthusiasts. There are cheaper and more sensible designs for the mere commuter, so DelFast builds faster, tougher and more powerful bikes. The Cross Dirt is equipped with beefed up tires and suspension. It’ll outrun the vast majority of its rivals with a top speed of 50 mph and a range of up to 110 miles.

The English in the manufacturer’s website and production description stumbles from time to time, but we can give them a break. The Ukrainian company is in the e-bike business and not filled with New York PR copywriters. Priced at $3,999, the Cross Dirt is available for pre-order now with optional payment plans. 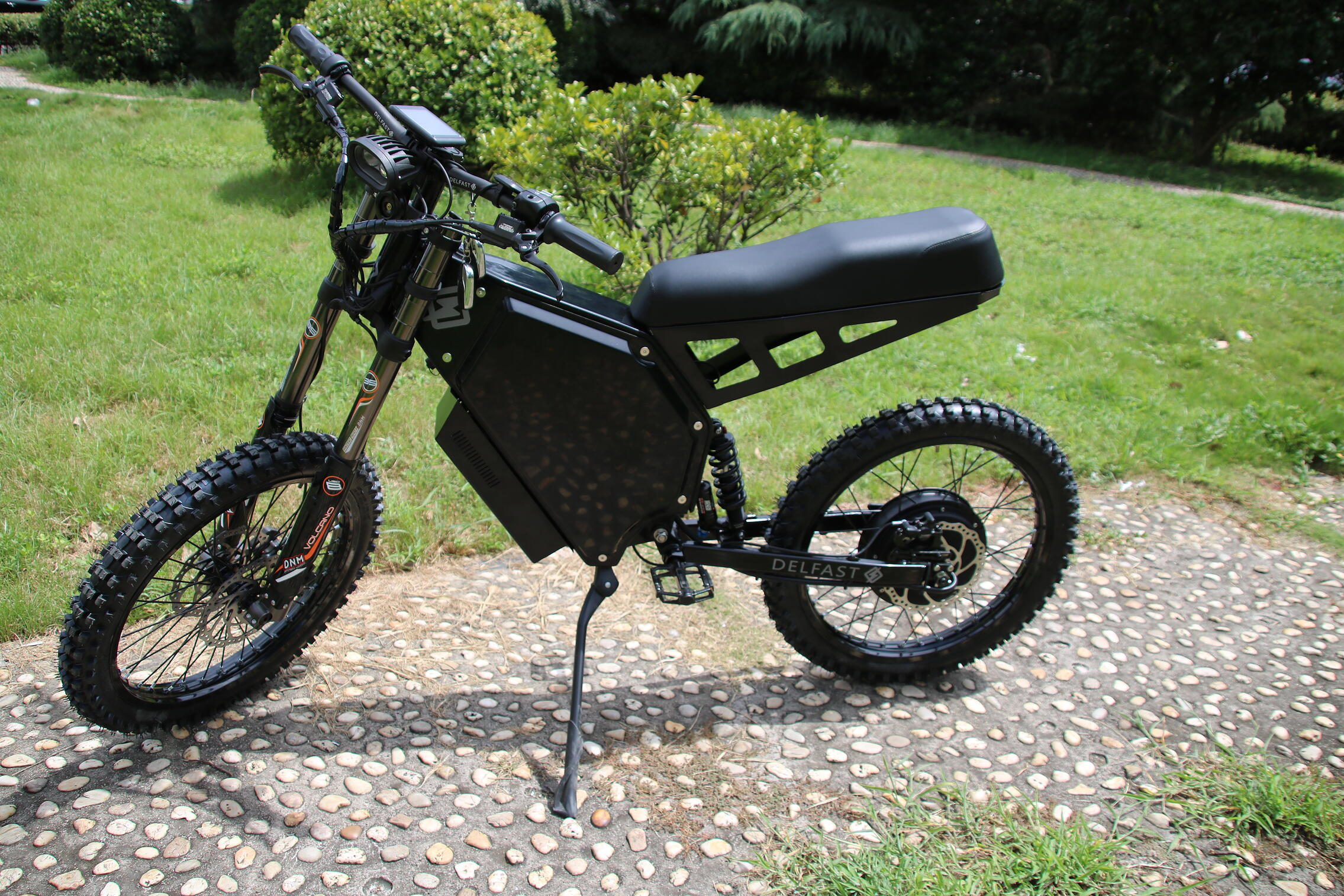 Well-reviewed, the rainbod Electric Mountain Bike offers e-bike beginners or buyers on a budget an option to ease into the market comfortably. It’s foldable for commuter use with an aluminum alloy frame, a front fork made of carbon steel and armed with comfort shock absorption. Front and rear wheels use double-layer aluminum and carry front and rear disc brakes. The 21-speed transmission system is aided by a 36V, 8AH Ion-lithium battery is removable, and the rider can choose to deactivate the electric motor to transform the ride into a traditional bicycle. 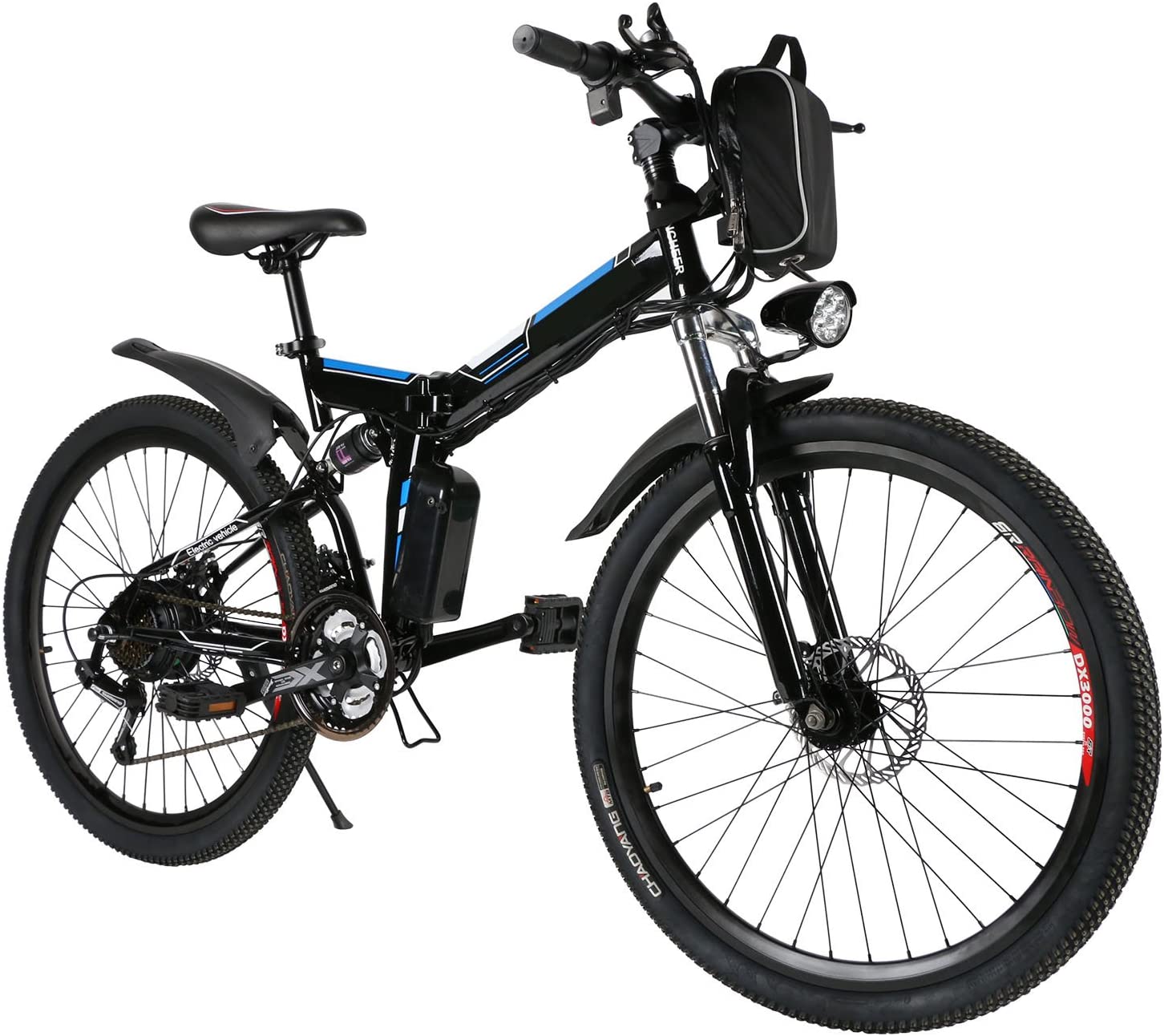 BEST FOR THE TINKERER

You say this is technically not an e-bike. That’s fair enough. Still, it opens the door for anyone handy with a few tools to transform a standard bicycle into an electric bike by installing this elegant rear wheel. The beauty of the Copenhagen Wheel is its simplicity. Everything you need to go from analog cyclists to electric dynamo is built into the red hub. No need to screw around with the motor, fine-tune any belts or adjust a single screw. Simply download the accompanying app, install your new back wheel and suddenly you’ll have 350 watts of power at your feet.

For those who love their current bike but wouldn’t mind some extra pep, it’s tough to beat a solution as put together as the Copenhagen Wheel. And the best part? The more you ride, the more the smart hub inside the motor learns your habits and stride, making the entire system more efficient and personal to you as a rider. 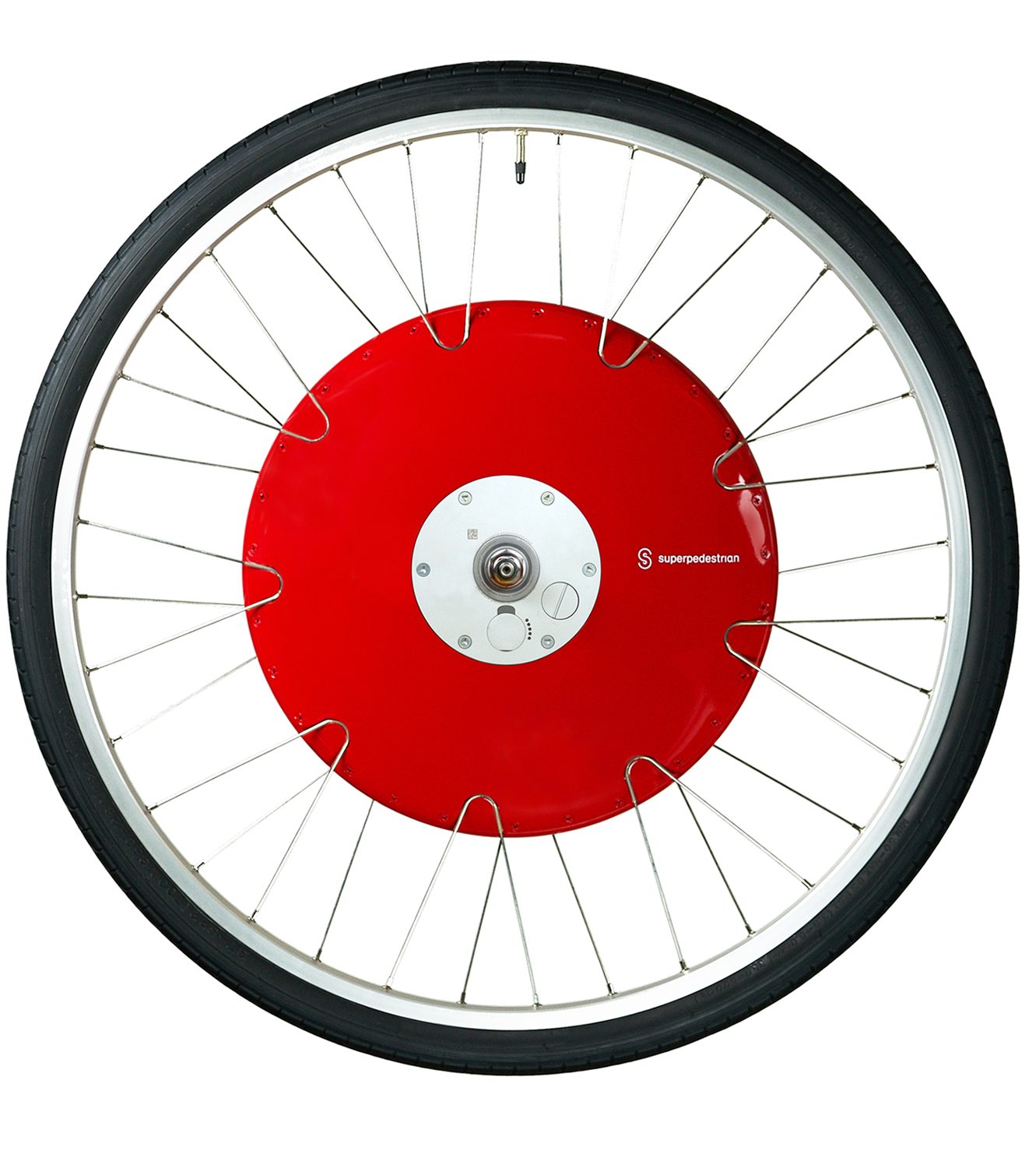