Every fisherman has their own fish tale of that time they caught the world’s largest fish. Coincidentally, these rather untrustworthy, world-record catches usually occur when said fisherman has no way to measure the exact weight or length of the catch, resulting in some rather suspect guesstimates. For the pretenders out there, this is no problem. But, if you’re serious about producing irrefutable evidence and winning accolades for your fishing, you’re going to need one of the best fishing scales to accurately record the weight and measurements of the fish.

When it comes to choosing the right fishing scale to keep in your tackle bag or box (perhaps in your fishing kayak), there are a number of considerations to take into account. These include:

So, if you’re ready to prove the fish you caught really is the biggest, take a look at our top 10 fishing scales. We’ve included both digital and mechanical options as well as devices with built-in measuring tapes to ensure there’s an option for every fisherman out there.

While simple in design, the Dr.meter LCD Display Hook Scale still manages to do everything you need from a standard fishing scale. The device sports a multi-directional weighing hook, as well as a measuring tape, allowing you to record catches up to 110 pounds (50kg) and three feet in length. Handily, the scale also includes a large LCD display which is backlit to ensure clear and easy-to-read measurements, even in low-light conditions. The device includes a hook-storage cutout, which offers a more compact shape when the scale is being transported or stored. 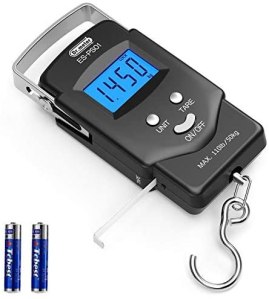 The Miami CarryOn Mechanical Fishing Scale is a battery-free way to weigh fish, small animals and luggage. The design features a large-faced dial with an accompanying weight lock for clear readings and best-of-the-day recordings. It can measure up to 75 pounds and also includes a handle for comfort during use as well as easy one-handed holding. Furthermore, the steel weighing hook folds into the scale for more convenient storage, while a built-in, 3.3-foot tape lets you measure the length of your catch, too. 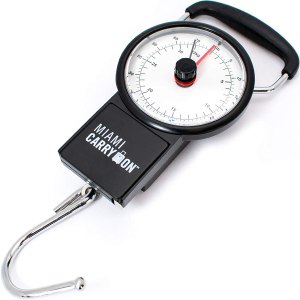 If you prefer analog over digital, the Goture Digital Hanging Scale could be the right choice for you. It’s made from a combination of tough, ABS plastic and stainless steel, which combine to provide a waterproof finish that can endure watery environments without a problem. You’ll also find a retractable, 39-inch measuring tape for sizing the catch as well as a handy dial to help you calibrate the scale with ease. 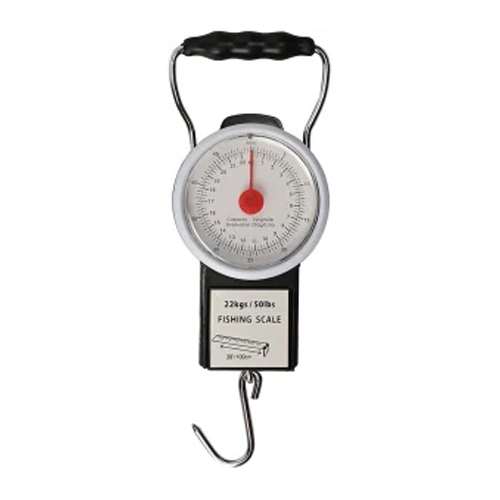 The Entsport Fish Lip Gripper Fish Scales has been designed with one-handed use in mind. At under 12 inches long, it is both compact and lightweight, while the included easy-grip handle, quick-release lever and drawstring wrist strap further add to the user-friendly convenience. In addition, this corrosion-resistant, stainless steel scale sports an extra-wide opening for easy grabbing and releasing. It also comes in two different models, one with and one without a built-in measuring tape. 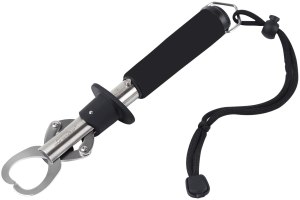 With a built-in tape measure and easy-hanging hook, the Fishfun Fish Scale Digital Hanging Hook Fishing Scale makes it quick and simple to weigh and measure your catch. You’ll find a large, LED screen that is also backlit to offer clear readings in your choice of either pounds or kilograms. The large hanging hook can turn 360 degrees for greater flexibility. It also folds in and clicks into place to give you a more compact device for travel or storage. Plus, the large handle allows for comfortable, one-handed use, while the built-in one-meter tape is available to measure the length of your catch. 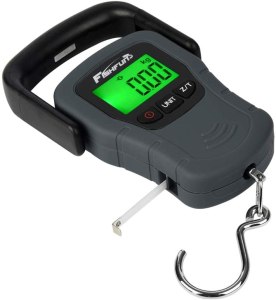 If your number one concern is getting your fish back in the water in as little time as possible, you may want to consider the Berkley Digital Fish Scale. This scale features a large clamp, which can hold your fish in a non-intrusive way for weighing. Alongside the clamp, you’ll find a 48-inch tape measure, which allows you to quickly and accurately measure the length of the fish while it’s still clamped in. Once complete, it’s seconds before your fish is back in the water and living the good life once again. Plus, this scale is capable of weighing fish up to 50 pounds and includes memory space for 10 different weights. 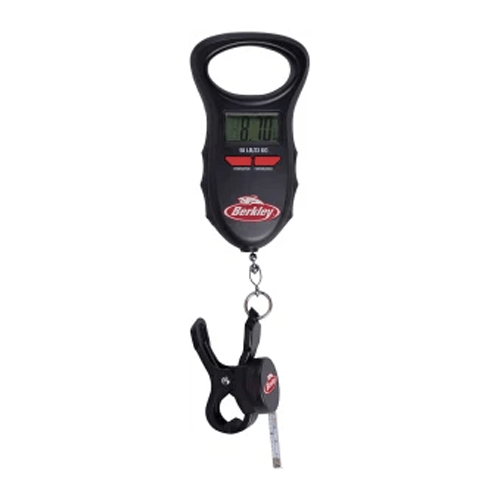 The RUNCL Waterproof Fishing Scale is a versatile device that lets you choose from a hook, loop or clamp when weighing your catch. It comes in either blue or green and features an IPX7 water-resistant construction that can handle being momentarily dropped in water. You’ll also find a large backlit, LCD screen for clear results as well as space for nine different weight recordings. Additionally, the TPR handle delivers a comfortable user experience, while the built-in, 40-inch tape measure lets you measure your fish at the same time. 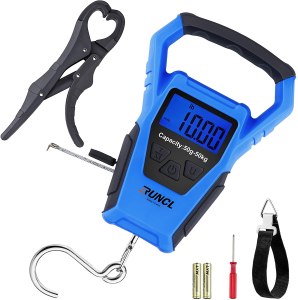 Accidents happen. And when they do, the last thing you want to lose is your fish and your digital scale, which is why the KastKing Digital Fishing Scale floats. Furthermore, it’s bright orange, which is easier to spot, and waterproof, meaning this scale is truly built for watery environments. Functionally, the scale effortlessly switches between kilograms and pounds and has the capability to store up to nine weights at a time. It comes with a no-puncture, floating lip gripper for easier and more fish-friendly weighing. 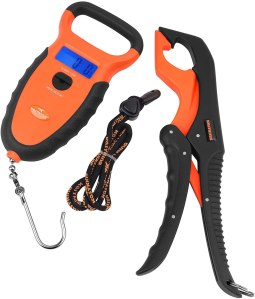 A fishing scale may not be the most advanced device you own, but the Rapala High Contrast Digital Scale proves it could still be the coolest-looking item in your tackle box. Its all-black design features easy-to-navigate, gray buttons, which let you access eight storage locations and choose between three weighing units. The device also includes a reverse image LCD for enhanced viewing, an easy-grip clamp, and, perhaps best of all, sports a built-in bottle opener for all those mid-fishing-trip beers. 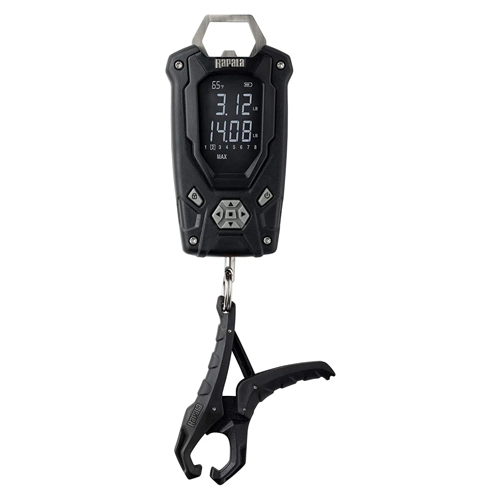 With the ability to display the weight of up to eight fish at a single time, the Rapala Touch Screen Tourney Scale was made for people serious about catching fish. The water-resistant device is available in either an original or limited edition color and comes with a drawstring bag for easier storage and portability. You’ll also be able to weigh fish using three different types of measurements and use either the built-in clamp or hook for added convenience. 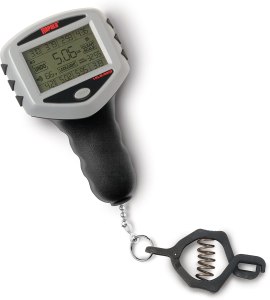