If you’ve got access to a pool or a lake, you should consider picking up a great floating cooler.

The best floating coolers keep beverages cold for at least a few hours while floating at the same time so you don’t have to hold your drinks while enjoying a day in the water. There are basically two varieties of floating coolers: the inflatable ones and the plastic ones.

Both kinds work well enough, but of course, inflatable ones are much more likely to puncture and fail down the road. They generally make up for that deficiency with lower prices.

On the other hand, more durable floating coolers tend to cost more, but they also tend to be made from hard plastics that make them last a lot longer and arguably float even better.

So whether you’re planning on drinking and hanging in the pool all day or taking a kayak out, there’s a great floating cooler for you. Check out our picks for some of the best floating coolers below and upgrade your days spent on the water, because who doesn’t want a cold drink on a warm day outside?

The Intex Mega Chill Inflatable Floating Cooler is probably more or less what you picture when you think of a floating cooler. It’s made from vinyl in the traditional donut shape of floating devices and includes four cup holders and two compartments on the donut as well as the enclosed cooler compartment in the donut hole. The cooler itself can hold up to 30 cans without ice and you can get about 15 more cans on it if you use the rest of the compartments.

Will it hold up in aggressive water situations? Heck no, but it will totally keep a couple of dozen cans cold while you float around the pool. What more do you really need from a floating cooler? 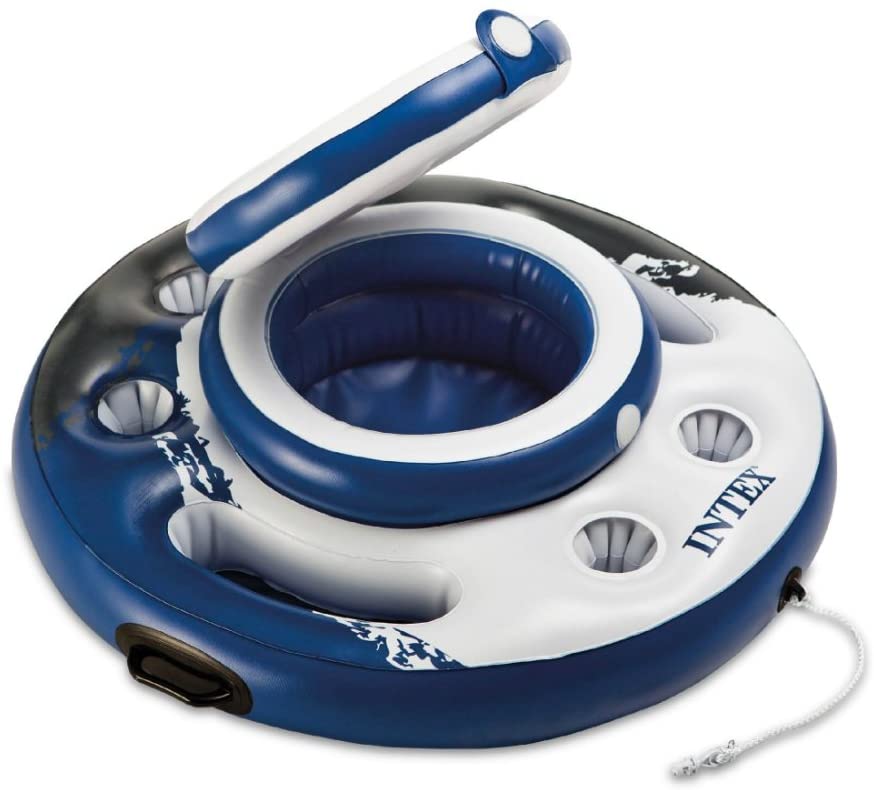 For another decent, basic floating cooler, you can check out the Airhead Aqua Oasis Floating Cooler. It’s actually two pieces: a vinyl base and a nylon cooler, so you can keep your six drinks floating while someone goes to refill the cooler. The cooler itself promises to keep 24 cans cold for hours, though if you’re adding ice it will be more like 15 or so cans, depending on how much ice you add. 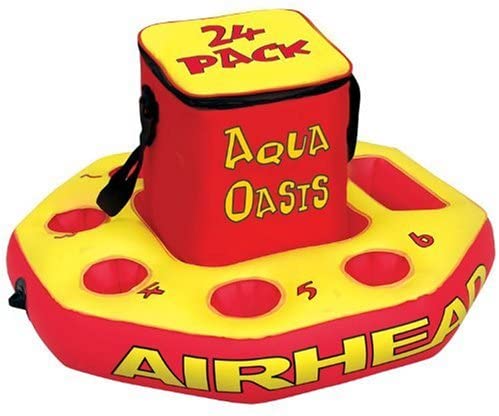 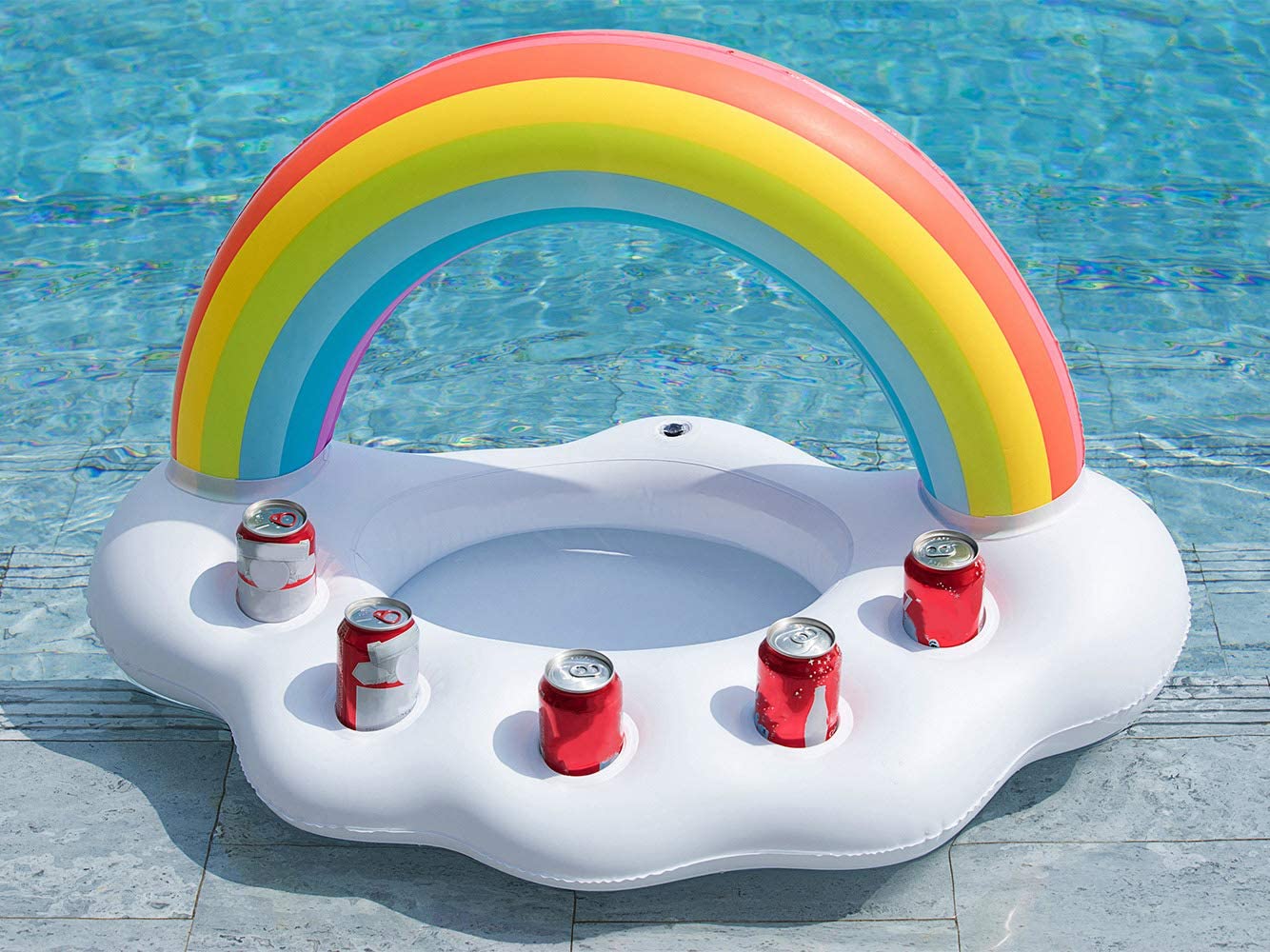 The Polar Whale Floating Drink Holder isn’t technically a floating cooler in that it doesn’t have a specific location just for ice and beverages. But this floating drink holder is basically just high-quality foam with cut-out spaces, so there’s no reason you can’t throw some ice and drinks in any of the compartments to make it a floating cooler. If you’re really worried about melting ice and potential soaking or material degradation, just use ice in plastic bags with your drinks.

Is that a little janky? Sure, but when you’re just trying to have some cold drinks by the pool, we’re in favor of any solution that works and this foam drink holder totally will.

Aside from the unofficial floating cooler status, the only downside is the price. For what is basically a large piece of foam with holes, you could probably make your own with half the money and a little know-how. 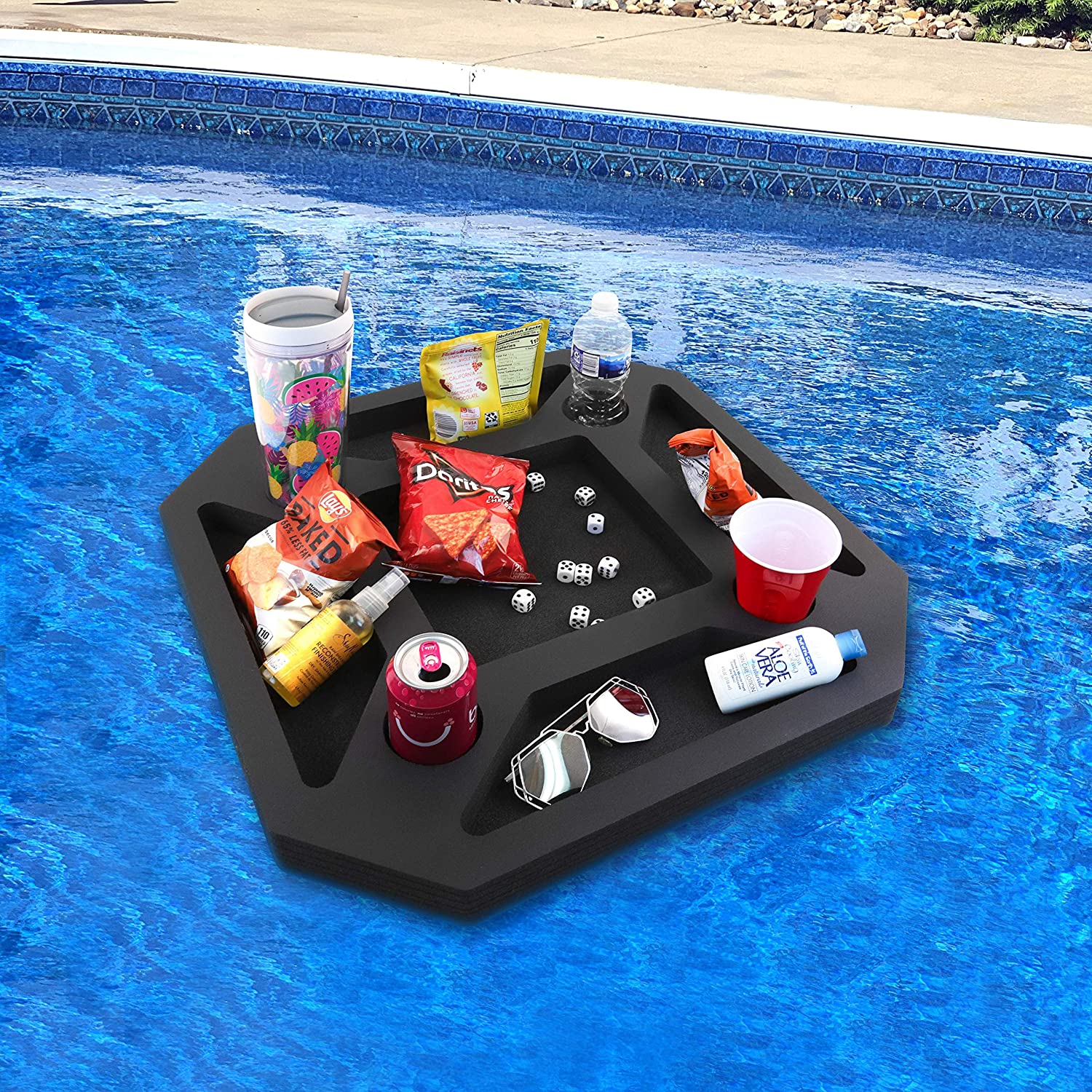 For a more durable, more versatile, non-inflatable floating cooler solution, the CreekKooler Insulated Floating Cooler will deliver. It’s not high-tech, but it totally gets the job done. The floating cooler is made from plastic, with two inches of insulation in the hull and deck and a watertight locking lid that promises to keep ice for 48 hours. And with a 30-quart capacity, you can hold 20 pounds of ice and up to 30 cans, with four cup holders on the deck, so you’ll be ready for a long day by the pool or on the water. If you do take it kayaking, you can easily tow the floating cooler behind you too since it basically is a little boat in its own right. 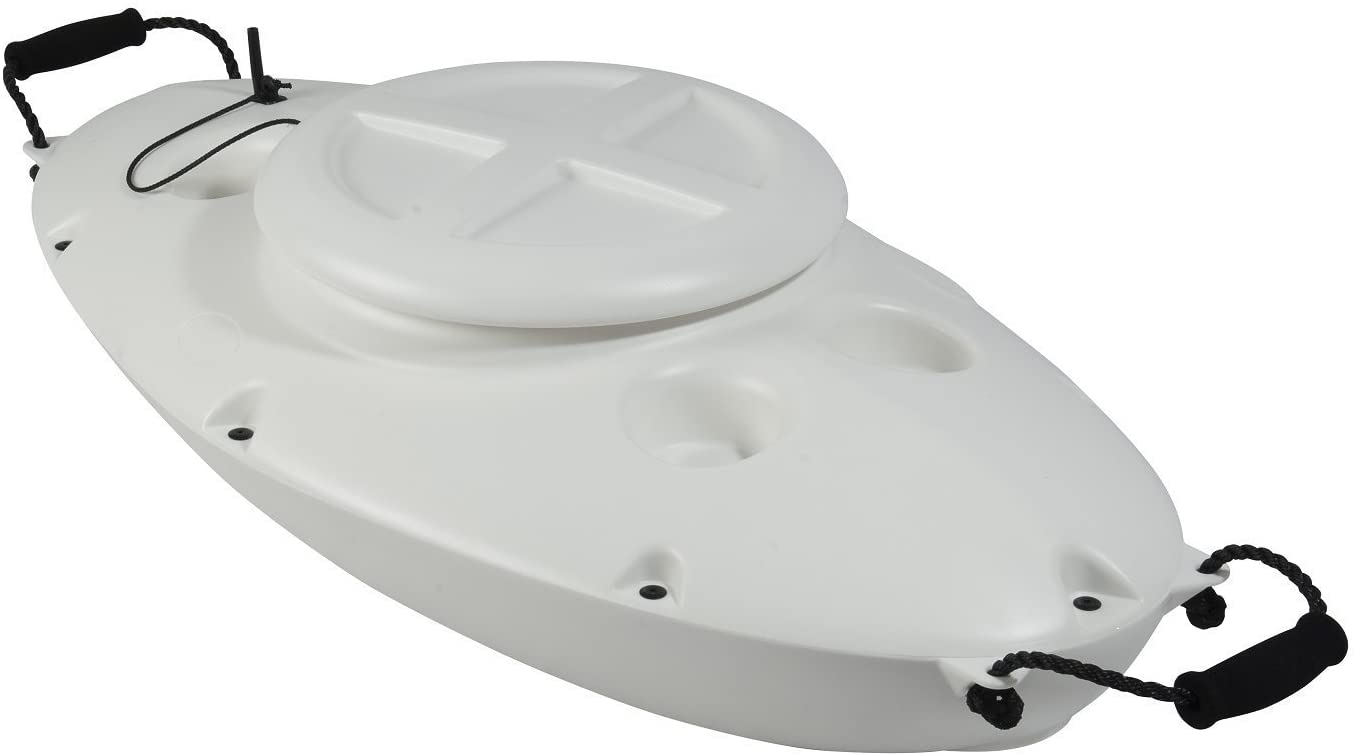 You’re thinking right now, “Yup, of course, this exists” because of course, a floating cooler / beer pong table exists! The GoPong Original Pool Party Barge Floating Beer Pong Table with Cooler is 6 feet long and holds 10 cups on each end plus eight side cup holders along the edges plus up to 18 cans in the cooler in the middle, or more like 12-15 with sufficient ice.

So basically, this floating cooler is pool party-ready as promised. The only downside is the cooler is open, so it will absolutely not hold up to the sun for more than a few hours without beer getting warm or without new ice.

The Yodo Waterproof Dry Bag Floating Cooler Backpack offers all the floating and beverage-cooling you need in a less ridiculous, more traditional dry bag package. That makes it suitable for places beyond the pool when you want cold beverages on hand, and boy does it hold a lot of cans, up to 30 without ice.

It keeps things cool and safe through its interior high-density foam, interior PEVA material, the same vinyl material used for things like shower curtains, and its exterior PVC material, the same vinyl PVC as in PVC water pipes. It also closes like a traditional dry bag by rolling the opening down and then buckling it closed so no water can wind its way through the rolled-close opening.

But be careful when loading it up with ice. One downside reviewers noted was a thin interior wall that can be punctured by sharp ice. But if you gently load it up and don’t put it through the wringer, this floating cooler will make for a much more secure option for water activities like kayaking. And if you’re really concerned about letting it float behind you while paddling around, you can always use it as a backpack to keep it out of the water. 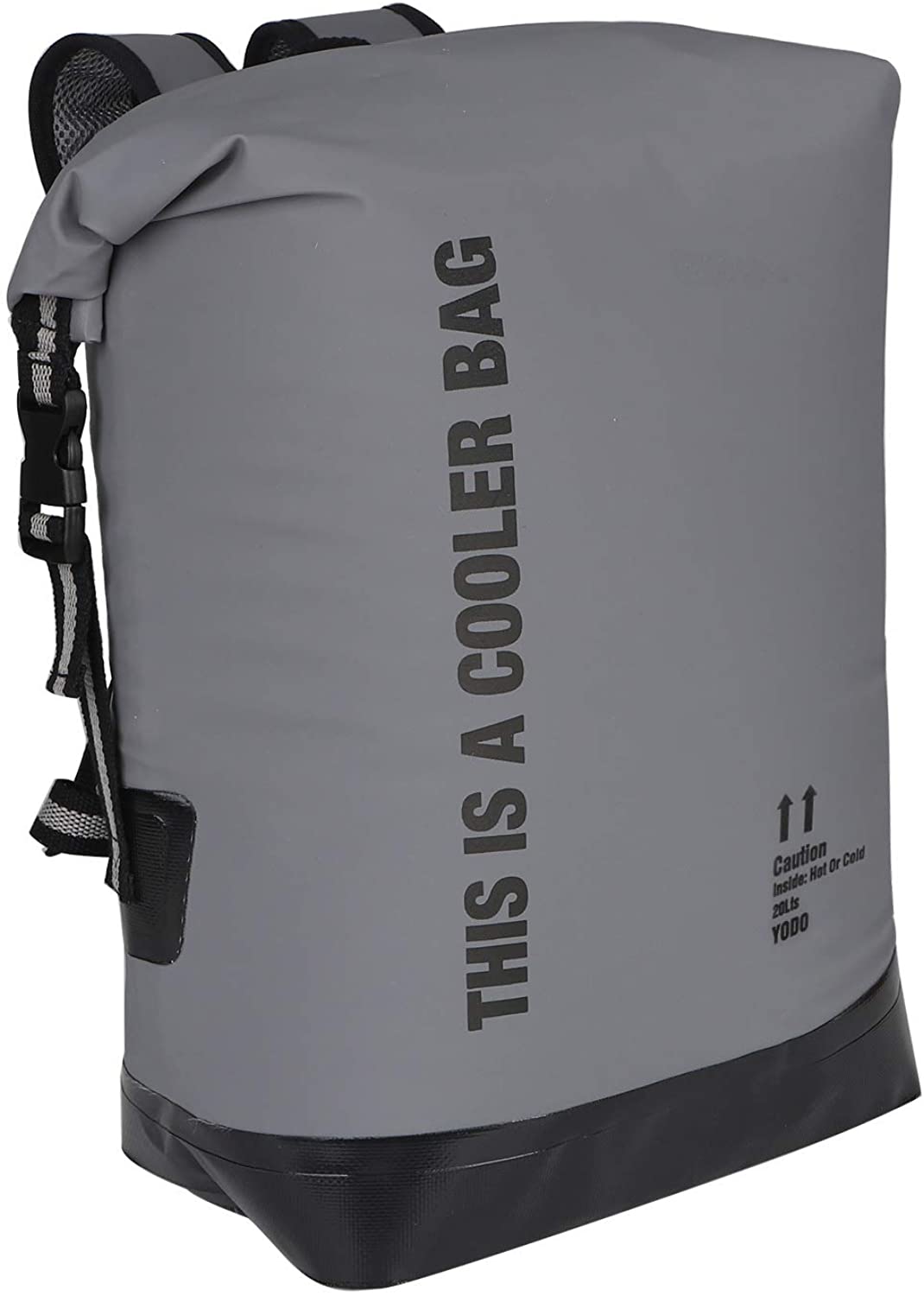 Propane Fire Pits to Gather Around During Cold Weather