No hunter should head out into the field without one of the best hunting knives. Not only is a hunting knife essential for, well, hunting, a solid hunting knife can also be used for other camping activities as well as self-defense in an emergency.

What is a hunting knife exactly?

Unsurprisingly, a hunting knife is a knife specially designed for tasks associated with hunting, such as preparing the game. That includes things like skinning and boning the animal. And that’s itL The best hunting knives are just knives designed to perform essential hunting-related tasks efficiently.

What makes a hunting knife different from other knives?

Because a hunting knife is designed for preparing game, it’s usually designed for cutting as opposed to stabbing. That means it generally will have a single sharp edge. Some blades also have curves, which can help with skinning, and some blades have serrated edges, which can help with sawing. Some knives also feature a gut hook, which is a hook on the end to help you “unzip” the animal with less risk of cutting you or other animal parts.

What kinds of hunting knives are there?

Like all other knives, you can go for a fixed blade or a folding knife. Given the tasks you need the hunting knife for, we’d recommend a fixed blade because a fixed blade is generally stronger and will never accidentally close in on you. But a well-made folding knife will work too if you’re looking for something more portable.

Once you’ve decided between fixed and folding, you need to decide among the different types of hunting knives. We’re going to focus on the main three, clip point, drop point and skinning knives.

A clip point hunting knife is thin and flat with a definite point. It takes its name from the apparent clipping of the end part of the blade. It’s an all-around solid design for most camping or hunting activities, including skinning and dressing. But the upside is also the downside. A sharp point can accidentally damage the animal’s organs during the field dressing process.

A drop point hunting knife has no such clip, is more curved and tends to be thicker. It also lacks as defined a point as a clip point knife, so you can use the whole blade for dressing and skinning when hunting, which will definitely speed up the process. The lack of a sharp point lowers the risk of damaging the animals during dressing too, but not having a single, super sharp point is also a downside.

A skinning knife is flat, thin and designed specifically for skinning animals. The knife has even less of a point than a drop point knife, and the blade slopes toward the end of the knife, making it easier to slide the blade through without damaging anything else.

Of course, these are the general differences and there can be a lot of variance among any one particular type of knife.

What else should I know about hunting knives before buying?

You also want to make sure to choose the right hunting knife for the job. For example, if you need something more versatile for multiple purposes, consider a mid-sized clip point knife. If you plan on hunting bigger game, such as deer or bears, you’ll probably want a large drop point knife, but you’ll want some smaller for animals like rabbits. If you anticipate having to do any sawing, you’ll definitely want to choose something with some serrations on the blade edge. If you’re looking for maximum portability, go for a folding knife and so on and so on.

And that pretty much covers the next-level basics. Before buying, you also should consider a few other things:

As long as you’re not buying absolute junk, you should end up with a decent blade.

To help get you started, we rounded up some of the best hunting knives we could find. Because we tend to believe fixed blades generally make for the best hunting knives, most of our recommendations reflect that, but we also included a great folding hunting knife too. For the sake of simplicity, we also focused on a variety of knives only because we could do whole lists for each kind of knife and wanted to give you solid options across type. So before you head out on your next hunting or camping trip, check out our picks below.

For a great knife, who else but Spyderco? The Spyderco Moran Drop Point Fixed Blade Knife will help you easily dress any game except for the largest animals. The nearly 4-inch thin blade and plain edge ensure the knife slides easily and doesn’t accidentally nick anything along the way.

It’s made of Japanese stainless steel so it can handle wetter hunting situations and features a flat grind, which won’t weaken the edge.

Lastly, it isn’t so big that it’s a pain to carry in its case. In the words of one reviewer, it’s “the only outdoor knife you need,” and we agree. It’s definitely one of the best hunting knives out there for its price. 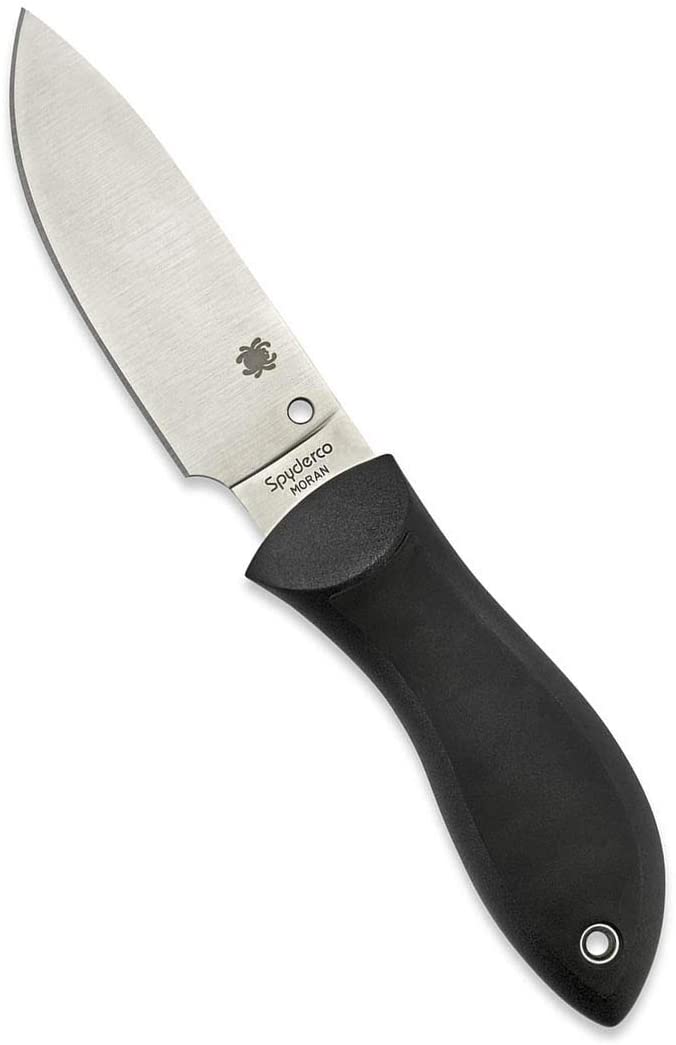 The SOG Fixed Blade SEAL Team Elite Survival Knife will handle any outdoor or hunting task except for sensitive dressing or dressing of smaller animals. Put another way, this 7-inch blade clip point knife is not messing around. A long sharp stainless steel edge makes slicing a cinch and the serrated edge near the handle of the blade will help you saw through whatever you have to, whether wood, rope or bone. Plus you won’t lose your grip courtesy of the glass-reinforced nylon handle.

You definitely won’t want to leave this survival/hunting knife behind when you’re packing for your hunt. 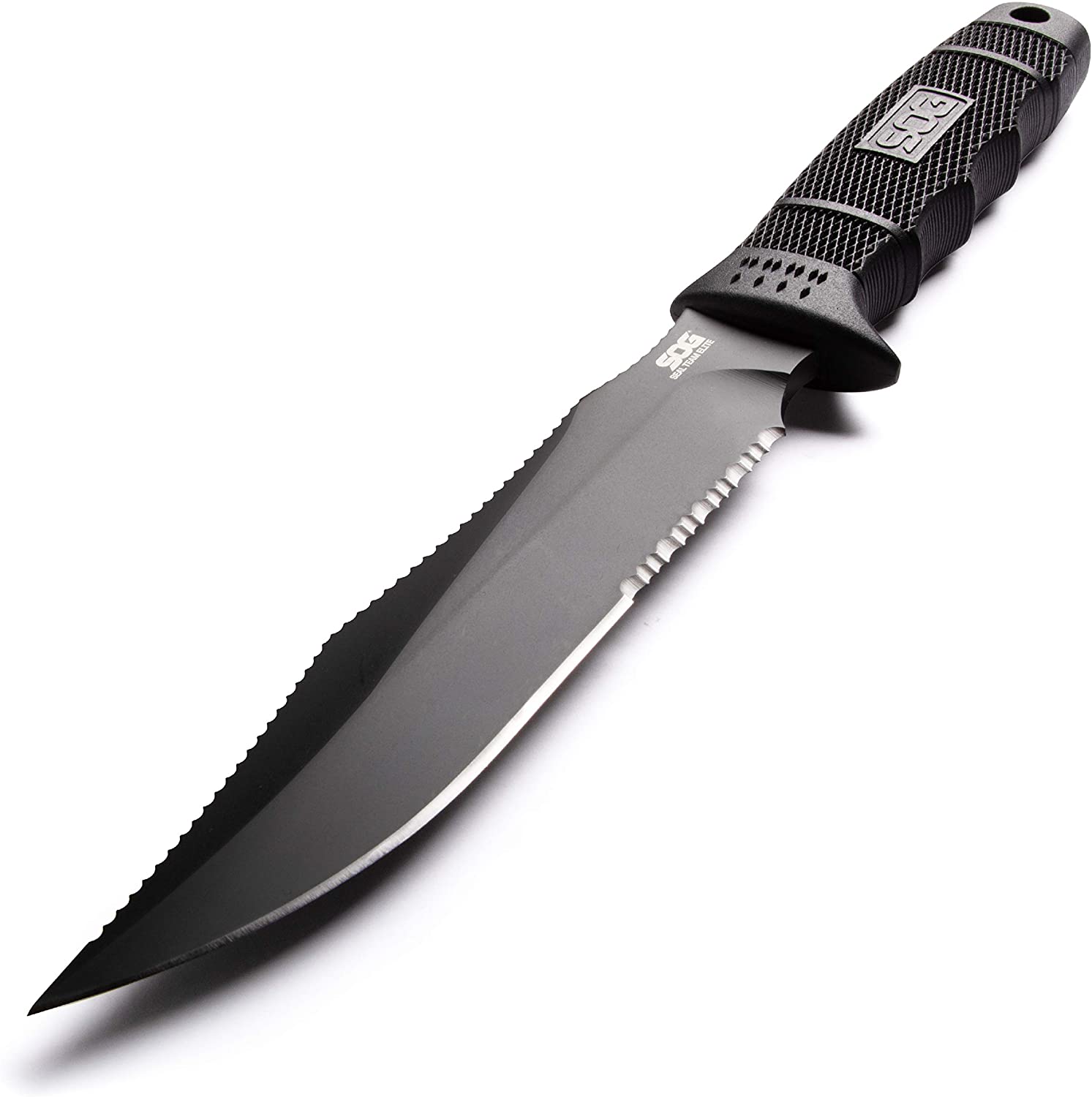 So you want a solid drop point blade but you want to be able to pay the electric bill too. We get it. You might consider checking out the Old Timer Gut Hook Copperhead Drop Point Fixed Blade Knife.

And don’t let the low price fool you. This is a quality-made knife, with a totally reasonable 3.4-inch blade and a full tang. One reviewer bought it hoping to fix it up and found it was practically flawless under a microscope, perhaps stemming from its use of nitride-coated high carbon stainless steel. But it’s as useful as it is well-priced. The drop point makes it great for dressing and the gut hook is as sharp as the blade itself, making the initial opening up a heck of a lot easier. 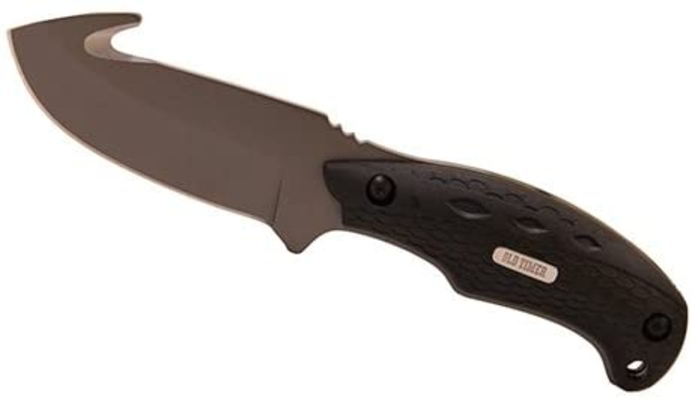 This folding knife features a 3.6-inch high carbon stainless steel drop point blade, with a serrated edge on the handle-side half of the blade. A textured rubber grip keeps your hand on the handle and a dual-sided thumb stud makes one-handed opening a piece of cake. And when you’re not using the knife, fold it up and stick it in the included nylon sheath. Yup, folding knives really are convenient. 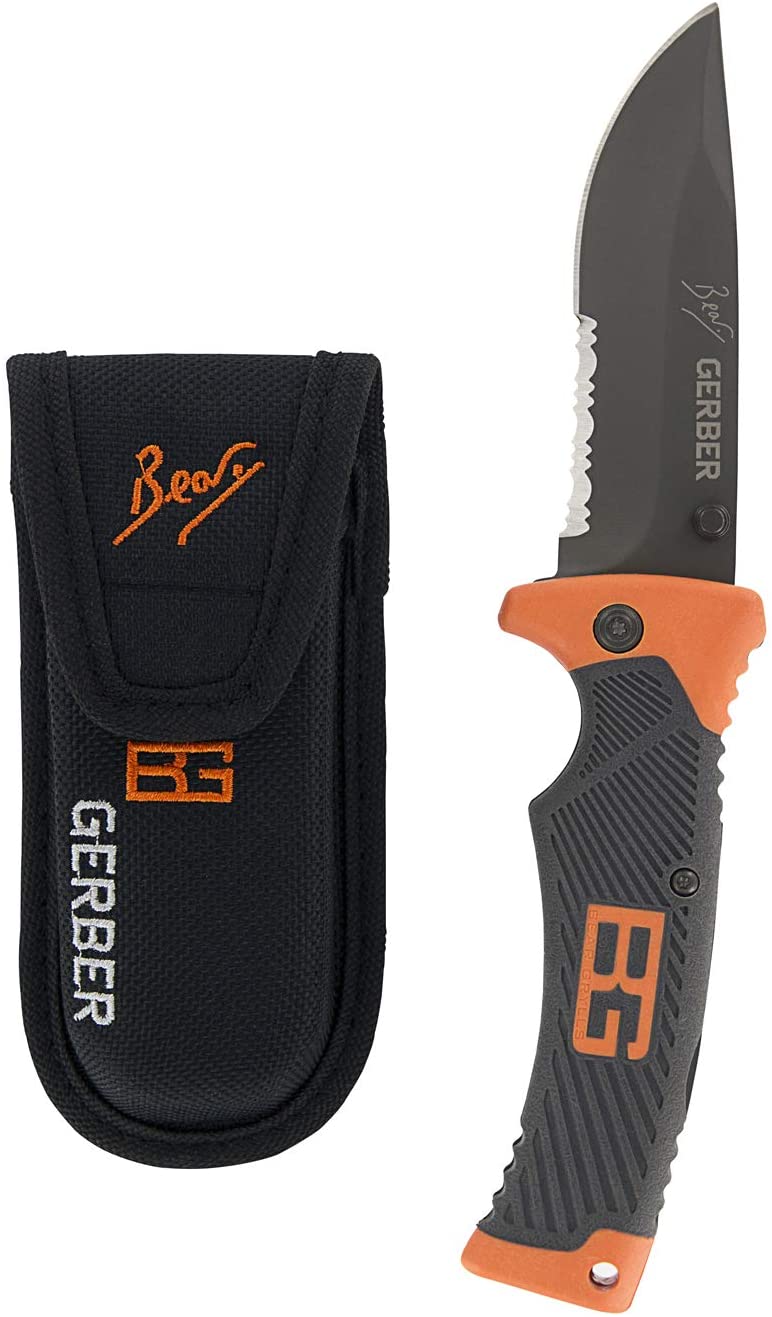 So you’re having a hard time deciding what you need to get for your hunting trip. When in doubt, you can always make sure you’ll have something useful on hand with a whole kit of specific-purpose hunting knives. In the Outdoor Edge Game Processor hunting knife kit, you get even more than you bargained for: a caping knife, gut-hook skinner, boning knife, butcher knife, wood/bone saw, tungsten carbide sharpener, ribcage spreader, heavy-duty game shears, carving fork, cutting board, and game-cleaning gloves in a hard-side carry case.

Every knife is made from heat-treated stainless steel, with full tangs and ergonomic rubberized handles.
Will you need all of these every time? Heck no, but with all the things you need to bring with you on a hunting trip, why not simplify the hunting knife part of it with a dedicated kit? Just having everything you could possibly need in one kit makes these some of the best hunting knives because the knives you have with you are always better than the ones you don’t. 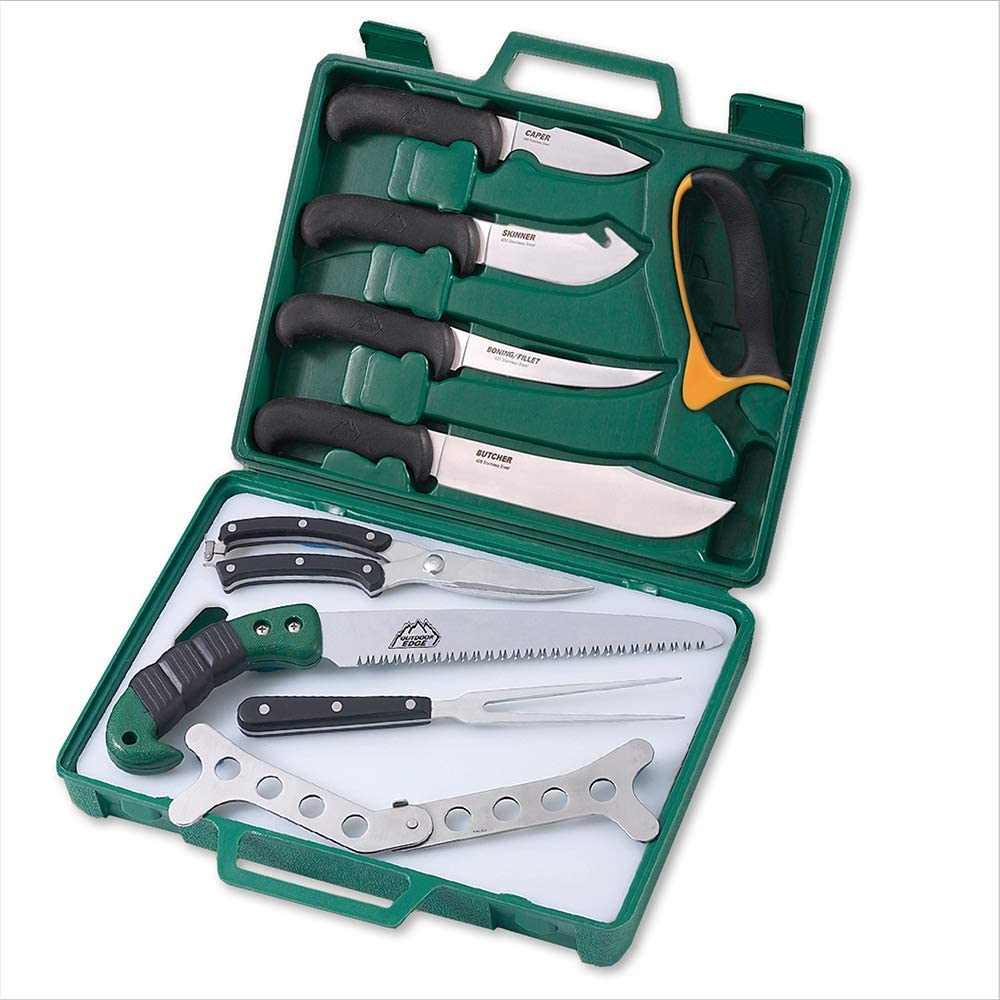 The Best Waterproof Socks for an Athletic Winter Season