If you’re looking for a fun workout on the water that can be done by people of all ages and abilities, we’ve got your new favorite warm-weather activity. Inflatable kayaks are an inexpensive and user-friendly boating device that help users enjoy long stretches of time on the water, whether they’re near a river, lake or ocean. Paddling solo or need room for two? We’ve got you covered.

Inflatable kayaks were frequently thought of as upgraded floating alligators. You know, those floaties that every pool had in the 1990’s that immediately sunk in the middle when you sat on them, sending the alligators head and tail straight up and out of the water. Inflatable kayaks have come a long way since they were first introduced and now provide an even and stable boating experience.

Check out our favorite picks below to find out more about the options. And if you already have a good kayak on hand, don’t forget to take a look at our round-up of the best kayak paddles!

This option from Advanced Elements fits two people, and the bright orange color gives it a sporty look and makes it easier to see while in the water. It has bungee straps at the front of the kayak for mounting gear, and the padded seat makes it comfortable for longer trips. The detail that sets this kayak apart is the ability to adjust it so that it accommodates one or two passengers by converting the top.

This kayak from Star isn’t cheap, but it’s built to handle like a traditional hardshell kayak. It offers a customizable experience so you can be comfortable while paddling through the water. Numerous features of this kayak are adjustable. You can adjust the seat and foot braces for a more comfortable ride, while the fin itself is entirely removable. A carry bag, pump and repair kit are all included with the kayak. It’s designed to accommodate one person. 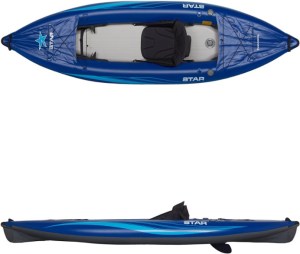 This inflatable kayak from Sea Eagle can hold its own in up to Class III rapids and has enough room for three people in it. It has two movable, super comfortable kayak seats inside with improved back support as well as two paddles and a foot pump for easy inflation. Each paddle has four parts including an asymmetrical blade and aluminum shaft for optimal use. The kayak has two skegs on the bottom for improved speed and tracking, and it has five different deluxe one-way inflation/deflation valves.

This inflatable kayak from Intex is perfectly comfortable and spacious enough for two people. Each seat has a backrest and a cockpit designed to provide plenty of space efficiently. There’s a removable SKEG for directional stability, and the bright yellow color improves your visibility to other boats in an emergency and in everyday use. This kayak is made for smaller, more temperate bodies of water including lakes and mild rivers. 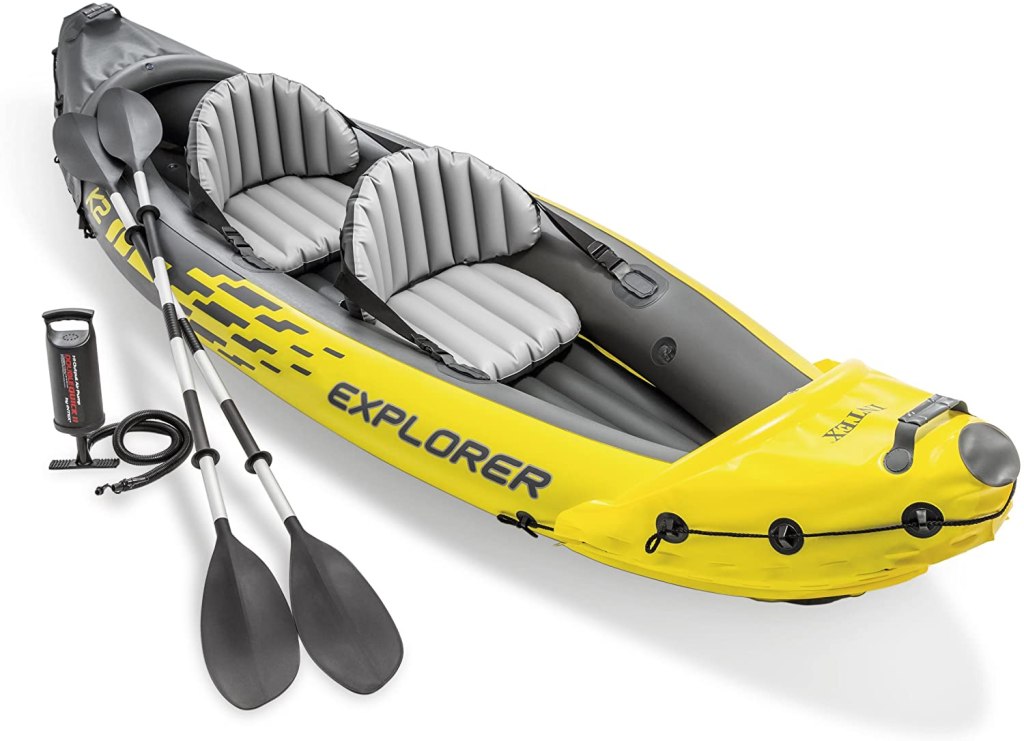 Intex makes some of the most affordable inflatable pools and kayaks, and this two-person kayak costs about a fifth of what some of the single-person kayaks on this list cost. So while it won’t necessarily be as performance-minded as the premium picks, it’s still a great option for casual use. Oars, a pump and a patch kit are included. This kayak is shipped and sold from Staples, of all places. Perhaps work-from-kayak is the next office trend? 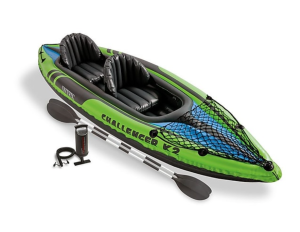 This inflatable kayak from STAR is made in the sit-on-top style, meaning that the seat is above the hull of the kayak, rather than recessed inside of it. The seat itself is removable for easier transport, and a detachable skeg is included. The front and rear of the kayak have straps for securing your gear. 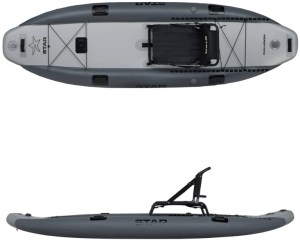 If you’re more interested in leisurely cruising than aggressively whitewater rafting, this four-person inflatable boat from Intex is a great option. It has two benches that are facing each other, making it great for just hanging out on the water. Built-in oar holders make it easier to paddle, and with three separate air chambers, a single puncture won’t sink the entire boat. 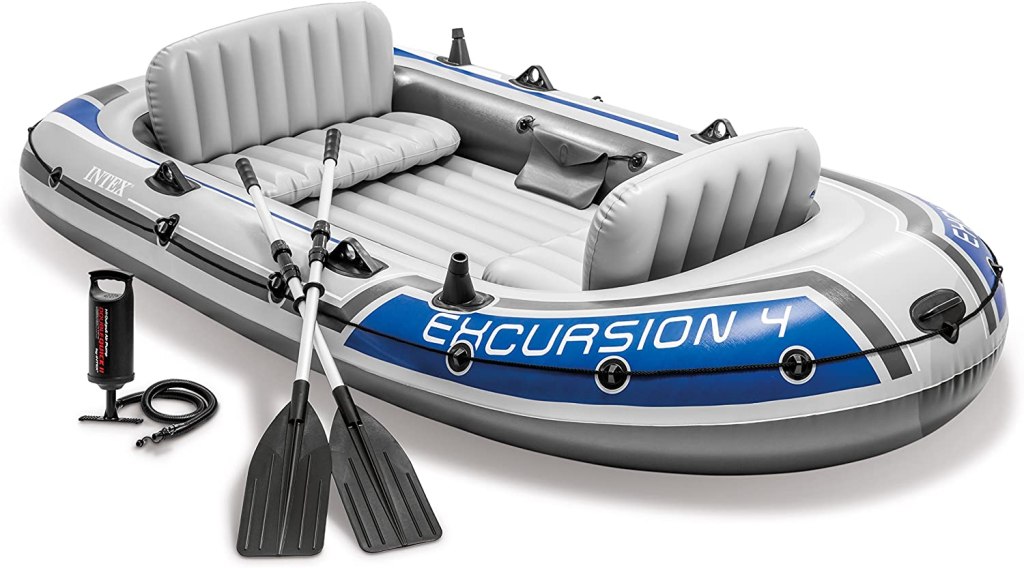 This inflatable kayak from Sevylor takes only a few minutes to set up and comes with an easy-carry backpack system that turns into the seat. It has a 21-gauge PVC construction that’s built for lake-use, and the tarpaulin bottom provides the durable, long-lasting protection from punctures you want as you paddle the day away. It has multiple air chambers that allow one to stay inflated if one becomes punctured, and the Airtight System is guaranteed not to leak. It also has two double lock valves for easy inflation and deflation. 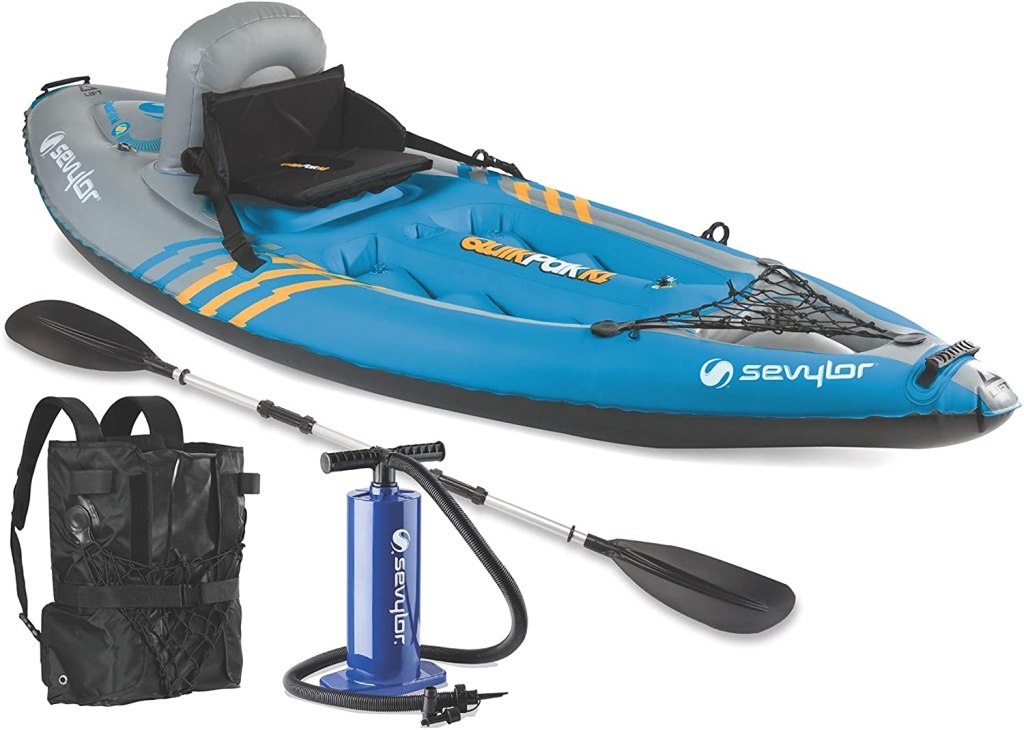 This kayak from Bote is a unique option due to its design. Instead of a carved out cabin, the seat is placed on top of the kayak, meaning that you sit on top of the kayak, rather than inside of it. You can also remove the seat entirely and use the kayak as a stand-up paddleboard. A webbing system gives you space to store your gear. The kayak also comes with a bag, hand pump, center fin, foot bar and repair kit. 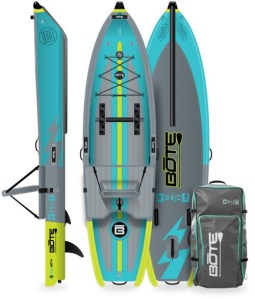 This sleek kayak from Kokopelli has an eye-catching yellow and gray colorway, and it’s made from durable 420 denier nylon and reinforced PVC. This kayak also comes with a convenient carrying bag, repair kit and an air pump. It’s designed to accommodate a single rider and has a total weight capacity of 300 pounds, but the kayak itself weighs a manageable 16 pounds, making it easy to carry. 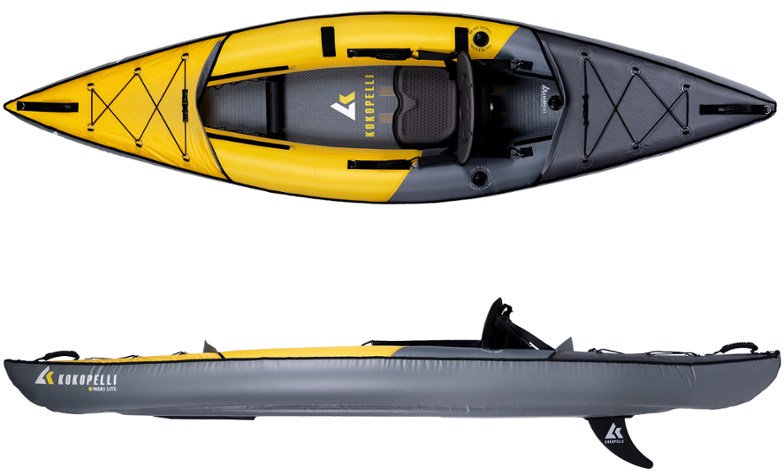 This kayak from Sevylor Coleman has 18-gauge PVC construction and is NMMA certified. It’s built for lake use with a 1000D tarpaulin bottom and an 840D nylon cover that provides excellent protection against punctures and holes. It has multiple backup air chambers in case one gets deflated somehow, and an Airtight System that minimizes the chances of leaking. This particular kayak is also equipped with Berkley fishing rod holders on the sides that are adjustable and perfect for hands-free fishing. It also has paddle holders to keep them out of the way when you don’t need them.