Paddleboarding is becoming one of the fastest-growing sports thanks to one significant improvement in its technology — inflatable boards.

As paddleboarding continues to become a more mainstream activity, creative ventures like yoga paddleboarding and paddleboard fishing are becoming more commonplace. Inflatable paddleboards are actually preferred for yoga, with their softer design more conducive to striking a pose on the water.

Unless you’re planning on surfing with your stand up paddleboard or you’re getting into competitive racing, inflatable paddleboards are the way to go. Here are three great options that will have you walking on water in no time.

The SereneLife comes with three bottom fins and one main fin, making it easier to steer the paddleboard straight and provide added surf control. The SereneLife has a safety leash, repair kit, carrying handle and bungee cords on the front of the board. With a 30-inch diameter and non-slip deck, the SereneLife is ideal for young paddleboarders and beginners.

Cons: At 10 feet long, the SereneLife is our shortest board and is better suited to teens or shorter adults, with the lowest weight capacity at 275 pounds. 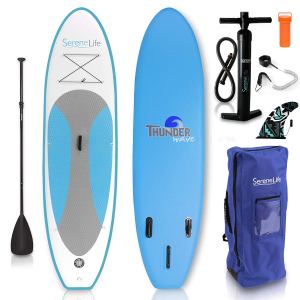 This option from Swonder comes with a complete accessory bundle, so you can quickly get started once you receive the paddleboard. The paddleboard itself is inflatable and made from durable PVC that resists abrasion. Included with the paddleboard are a paddle, a manual pump, a removable fin, a coil leash and a convenient carrying bag. The accessory bundle is color-coordinated and has an eye-catching blue and orange colorway.

Cons: Manual pump is slow and you may want to invest in a better one. 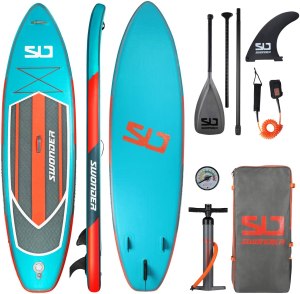 If you’re feeling patriotic, this American-flag print paddleboard from GoPlus is a fun and affordable option. It’s constructed from a double-layer PVC that’s designed to resist abrasion. The paddleboard is inflatable, and the included carrying bag makes it easy to take on the go if the lake isn’t right next to where you parked. Other accessories include the pump, detachable fin and adjustable paddle.  It’s 11 feet long and 30 inches wide.

Pros: Affordable option that comes with plenty of accessories. Inflatable board and included bag, so it’s relatively easy to take on the go.

Cons: Surf leash is not included. 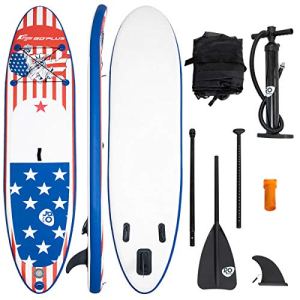