Every now and again, a particular hobby or sport seems to come out of nowhere and find itself standing in the limelight. Having established itself as the thing to get into, it’s only a matter of time before you succumb to the pressure and see just what it is everyone is talking about. There is no better example of this phenomenon than the current fastest growing sport in America, pickleball. What’s pickleball you say? That’s the question we’re here to answer, while also introducing you to a selection of the best pickleball paddles. This will give you both the knowledge and the tools you need to get yourself involved in this rather addicting game.

Imagine a game that borrows all of the best parts from tennis, badminton and table tennis, is quick and easy to learn and is great for socializing with friends, and you’re somewhere close to picturing pickleball. To play, you’ll need a paddle and a wiffle ball-like ball with holes in it. You’ll also need a court to play on. These can be either indoors or outdoors. However, the thing that will really get you coming back for more is the game’s multiple levels of complexity. What seems like a simple pit-and-pat, back-and-forth racket sport, will quickly develop into a surprisingly quick, fast-paced game which is only limited by your skill level.

One of the questions you are likely to come across, or even ask yourself when taking up pickleball, is exactly why it has this rather odd name. As much as we’d love for it to be because it was originally played with a pickle, the real answer isn’t quite as simple. This is because two possible accounts for the name exist.

The first possibility is that it came from Joan Pritchard, Joel Pritchard’s (Pickleball inventor) wife, who started referring to the game as pickleball after she felt it was comparable to the ‘pickle boats’ in rowing. In the same way that pickleball is made up of rules and inspiration from a number of other racket sports, pickle boats are put together using a randomly assigned crew, usually including leftover rowers from other teams, who are thrown into the same ‘pickle boat.’

The second possibility? The Pritchard’s dog was called “Pickles,” and he had a habit of stealing the plastic wiffle ball that the family used to play their as-of-yet-unnamed game with.

How Do You Play Pickleball?

Firstly, pickleball can be played as either a singles or a doubles game. The court is the same size as a standard badminton court, which measures 20 by 44 feet. To begin a game, the ball is served diagonally over the net from the right-hand service square. It’s also important to note that points can only be scored by the side which is serving the ball.

Each side must allow the ball to bounce once before players can volley the ball back. However, there is also a no-volley zone which is located on either side of the net. The aim of this zone is to prevent point-ending “spiking.” Outside of this zone, players are free to volley the ball. After the point has been won, either through a double bounce, a foul or being hit outside of the court, the server continues, alternating serving sides until a point is lost on their serve.

The winner is the first player or team to reach 11 points by a difference of at least two.

To get you game ready, we’ve put together a selection of the 11 best pickleball paddles available online. We’ve covered all the bases, from beginner-level paddles to more advanced options. You’ll also find single paddles, two-pack sets and even four-paddle sets for bigger groups or families. Read on to find the right set for your needs.

For beginners and intermediate players looking for a high-quality, medium-weight standalone paddle, consider this ONIX Graphite Z5 Pickleball Paddle. The paddle comes backed by over 2,000 five-star ratings from happy Amazon users who are more than happy with their first “real” pickleball paddle purchase. It’s also available in 11 different colors and includes a wide body shape and a graphite face, helping to create the impressive level of control this paddle is well known for. 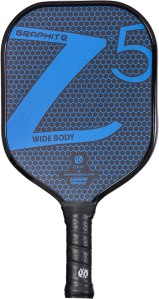 With over 1,000 five-star ratings and a price tag under $45, the niupipo Pickleball Paddle is the tried-and-tested, budget-friendly answer to any standalone pickleball paddle needs. This high-quality paddle, which is approved by the USAPA, features a polypropylene honeycomb center, a fiberglass-reinforced face and an edge guard, resulting in a lightweight yet durable product. For greater comfort and security in hand, this beginner-friendly paddle also includes a high-quality grip made up from a perforated and stitched wrap. 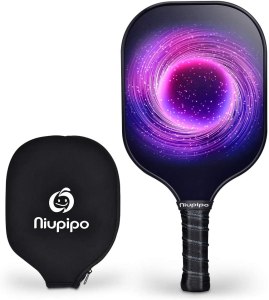 For under $60, this TICCI Pickleball Paddle Set gives you and a partner everything you need to walk onto the pickleball court and get a game going. The set is made up of two paddles, four pickleballs, a drawstring bag and a larger carrying case for storing and transporting everything. Each paddle included in the kit is ideal for beginners looking to get into the game, as they are lightweight at only eight ounces and feature comfortable, sweat-dissipating grips to keep players comfortable during play. Additionally, these sets are available in 10 different colors. 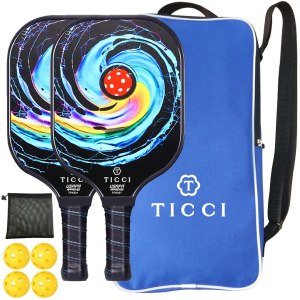 If it’s important that your paddles look as great as they are to play with, this Vinsguir Pickleball Paddles Set could be the choice for you. Each paddle included in the set is adorned with a sport-inspired, colorful design that is sure to catch the eye of your opponents. This comprehensive kit includes two pickleball paddles, four pickleball balls and a handily sized pickleball bag that is made for transporting all of your pickleball gear. At 7.8 ounces, the rackets are an ideal option for both beginner and intermediate players. Plus, you’ll find breathable, non-slip grips on each paddle to keep you comfortable and in control, even when things get a little heated. 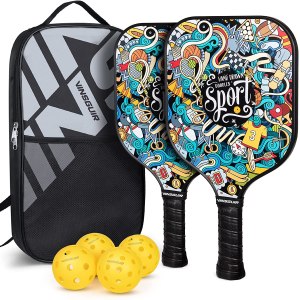 In addition to two high-quality paddles, two pickleball paddle grips and two pickleballs, this XS XSPAK XS05 Pickleball Paddles Set comes with a multifunctional pickleball backpack. The traditional-style backpack includes two adjustable padded straps and a large central pocket for carrying the two paddles. There’s also a large front pocket for carrying balls and larger personal items, as well as an internal zippered pocket for more valuable items. Furthermore, the face of each paddle is made from carbon fiber to provide better control over the ball, making them an ideal option for intermediate to advanced players. 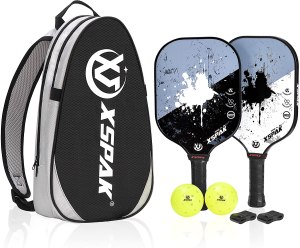 If you’re looking for a complete, two-person set that includes everything you would need to turn up at the court and start playing a game, it’s hard to look beyond this niupipo Pickleball Paddle Set. The two-racket, four-ball set has positive reviews from over 95% of Amazon users and comes with a handy carry case for easier storage and portability. Each of the ergonomic paddles includes a polypropylene, honeycomb structure to create a lightweight paddle that minimizes the stress put on your joints. They are also covered with a fiberglass face and have an edge guard for greater durability. Plus, they come in either blue and orange or black and gray. 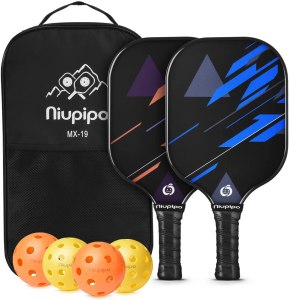 This set of Uteeqe Pickleball Paddles Set is a great choice for players who are particularly prone to sweating during physical activity. Each of the two included paddles features a cushioned, contour grip which includes ribs to improve in-hand security, as well as a perforated surface to help wick sweat away as you play. Additionally, this two-paddle set comes with four pickleballs and a handy carry case. 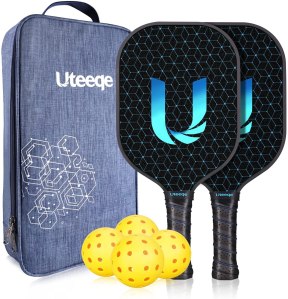 If your pickleball game is all about power, it may be worth switching to a racket with a bit more weight behind it. In this Onix React Pickleball Paddle, you’ll have between 8.3-8.7 ounces in your hand, making it easier to generate more power into the ball you’re hitting. This popular racket also includes a fusion core that combines polypropylene and Nomex to offer greater control at the same time. In addition, the paddle’s wide body shape and tennis racket-style handle provide greater coverage and in-hand security. 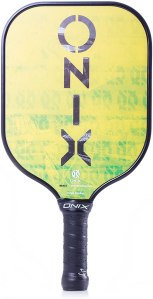 Thanks to pickleball’s compact court and easy-to-understand rules, there’s no reason adults and kids can’t enjoy a game together. To get your four-member family into the game, try this Niupipo Family Pickleball Paddles Set. The four-paddle set includes two adult-sized paddles and two smaller, junior paddles, along with four pickleballs and a handy carry case. Each paddle in the set sports a cushioned, sweat-absorbent grip for better in-play comfort. It’s also worth mentioning that this is one of the best-rated products featured on our list, having received a five-star rating from over 90% of Amazon users. 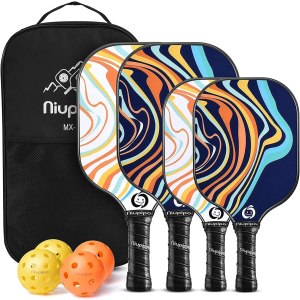 Got three friends who want to play pickleball? Or just like having a lot of spare paddles? Either way, this set of OLANNY Graphite Pickleball Paddles is right for the job. In addition to the high-quality paddles, of which two are blue and two are red, you’ll find six pickleballs, four replacement grips and a large storage and carry bag which includes both handle and over-the-shoulder carrying options. Plus, the paddles sport carbon fiber faces with honeycomb cores to minimize weight while maximizing strength. 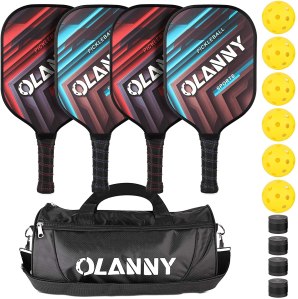 If you already know your way around a pickleball paddle and are looking for something a little more advanced, this Gamma Legend NeuCore Pickleball Paddle could be the right choice for you. With its oversized face and weight of only 7.6 ounces, this middle-weight paddle is an ideal choice for both friendly and professional environments. Furthermore, if the weight or design isn’t to your liking, there’s a number of alternate, USAPA-approved paddles to choose from to ensure you get the right one for your level and style of play.