There are few products in the world that can claim to have genuine longevity. For the most part, inventions enjoy their purple patch then eventually get redesigned or replaced by something which can do the job better or more efficiently. What’s amazing about the best Swiss army knives is that this time has never, to this day, arrived. The best Swiss army knives remain the benchmark for any everyday carry and multi-tool designers to measure up to. And what’s even more impressive, is the knife’s original design is remarkably close to today’s product, showing just how well designed it really is.

A Short History of the Swiss Army Knife

In 1891, the Swiss army contracted Karl Elsener, the owner of Victorinox, to produce a tool capable of fulfilling the needs of soldiers in the field. Two of the key tasks soldiers had to complete were disassembling the Swiss service rifle and opening canned food. Little did Elsener know, in the production of his answer to this request, he’d be creating one of the longest serving and most famous tools the world has ever known. Interestingly, the original knife only featured a comparatively small number of built-in tools. These were:

Unsurprisingly, since its original creation in 1891 and given advances in materials and manufacturing techniques, this world-renowned tool has undergone a number of revisions and improvements. However, the core design remains true. That is, a number of tools, which fold out in both directions, mounted between two grips. A final fact worthy of inclusion is that even today, Victorinox knives (and this means knives specifically) are only produced in factories in Switzerland and nowhere else in the world.

Offering 33 different functions and coming backed by five-star ratings from over 90% of Amazon users, the Victorinox Swiss Army SwissChamp Pocket Knife is a standout piece of kit. Not too few and not too many, this well-endowed multitool sits right in the most convenient space, giving you enough tools to come up with something clever to solve almost any situation. The centrally located tools are surrounded by high-quality, acrylonitrile butadiene styrene handles, which offer durability and sturdiness in hand. Tools built into the knife include a pair of pliers, a nail cleaner, a pair of tweezers, a wood saw, a chisel and a fish scaler. 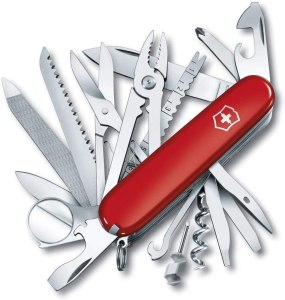 At just over $20, the Victorinox Swiss Army Classic SD Pocket Knife is a budget-friendly way to keep a Swiss army knife on your person. In addition to its low price, the multi-functioning knife has a five-out-of-five-star rating, with almost 90% of users awarding it top marks. Functionally, the knife offers seven different tools to choose from, including a compact, 1.25-inch blade, a pair of scissors, a screwdriver, a toothpick and a pair of tweezers. In addition, this knife comes in a range of different colors such as yellow, red, grape and black. 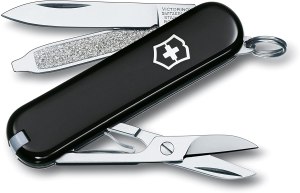 With this Victorinox Swiss Army Classic SD Pocket Knife in your pocket you can be both practical and patriotic at the same time. Forget the traditional red, and forget plain, one-color designs, instead enjoy this stars and stripes-adorned knife. The classic SD knife itself provides seven different functions in the form of a small blade, a pair of scissors, a 2.5-milimeter screwdriver, a nail file, a toothpick and a pair of tweezers. Additionally, the built-in keyring makes it especially easy to attach your knife to a larger key chain, belt buckles or a backpack. 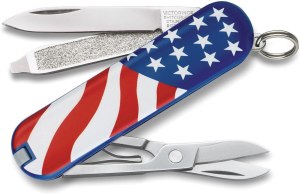 If you’re solely looking for a tool with as many functions as possible, it may be worth considering the LEATHERMAN Wingman Multitool. This impressively reviewed multitool comes equipped with 14 different tools built-in, allowing you to complete around-the-house fix-ups, camping necessities and other handy tasks using nothing more than it to do so. Included tools range from a package opener and wire stripper to a knife and a tough and reliable pair of pliers. In addition, all Leatherman product comes with a 25-year warranty so you always know you’re going to get plenty of use from your investment. 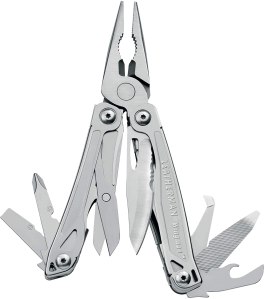 At under $30 and boasting 21 built-in tools, the WETOLS Multitool is more than worth its price. It also comes backed by over 1,700 five-star ratings from users who love its versatility and high-quality construction. Inside the multitool, you’ll find several different knives, a hole puncher, a bottle opener, a file, two types of screwdriver and three types of pliers, and that’s not all, either. Handily, this multitool also comes with a carrying case which can attach to a belt for safer and more convenient storage. 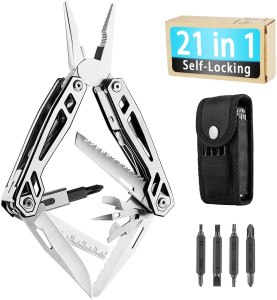 As the name suggests, the Victorinox Swiss Army Huntsman Pocket Knife is a great option for hunters, as well as outdoorsman and general use, too. The 15-function knife beautifully balances size and functionality, to give you a tool which is lightweight enough to carry without noticing it and handy enough to get you out of sticky situations. Helping to back up this knife’s impressive resume are positive reviews from over 95% of Amazon users. Plus, at just over $30, it’s a great stocking stuffer idea which will be well received and won’t break the bank. 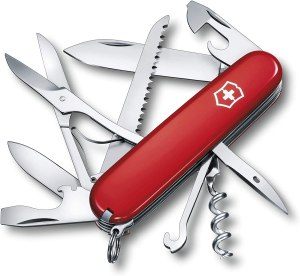 With its classy silver finish, the Victorinox Mini Champ looks as good as it functions in the field. The knife includes 14 individual tools and measures a compact 58 millimeters in length, ideal for in-pocket or in-backpack storage. Popular tools featured in this knife range from the bottle opener and a general scraper to a pair of scissors and a built-in ruler. All in all, this is a stylish and smart way to make sure you’re ready for almost any eventuality. 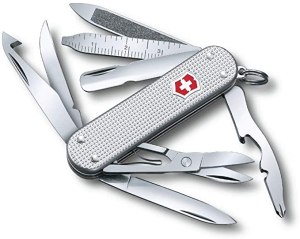 This Victorinox Swiss Army One-Hand Trekker Pocket Knife is a compact, agile and function-filled answer to your EDC, camping and general adventuring needs. It’s constructed from Swiss-made stainless steel with a slim profile and built to withstand the trials of daily use. This 12-function knife sports a bottle opener, a screwdriver, a wavy-edged blade, a wood saw, a can opener, a toothpick and several other hand tools. This also includes a key ring to allow for easy attachment to belt buckles, backpacks or other key rings, too. Furthermore, this knife is available in four different colors, including camo, black and desert grip options. 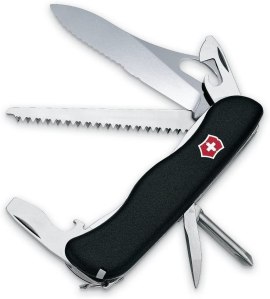 If you’re looking for a tool for those just-in-case moments, the Victorinox Swiss Army Rescue Tool has you covered. Each of the 13 included functions has been designed with emergency situations in mind. Tools found inside include a seatbelt cutter, a window breaker and a disc saw for getting through shatter proof glass. The knife’s design is also equally as comfortable for left or right-handed users and sports a phosphorescent yellow color so it’s easily located when it’s needed. 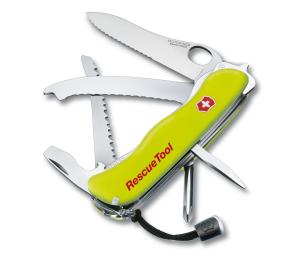 Thanks to its plethora of included tools, the Victorinox Swiss Army EvoGrip S54 Pocket Knife is ready for almost any eventuality, whether that’s around the home or out on an adventure. From its large blade to the wire crimping tool, no matter what obstacle you’re trying to overcome, it’s likely there’s something to help you out. Furthermore, what’s also impressive about this comprehensive pocket knife it’s how compact it is, given its 32 built-in tools. 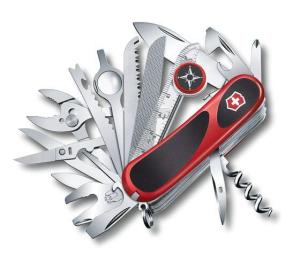 With an impressive 83 different functions, the Victorinox Swiss Army Swisschamp Xavt Pocket Knife is a behemoth among its kin. We challenge anyone to find a task it cannot help with. It’s impressive versatility makes this a handy accompaniment to indoor or outdoor pursuits and worthy of your investment. Notable inclusions range from the built-in digital watch and thermometer to the pressurized ballpoint pen and magnifying glass. Of course, this well endowed knife also comes with all the traditional tools like a blade, of which there are numerous, a screwdriver and a nail file. All in all, this impressive multitool would make a great gift idea for the outdoors-person in your life, and also comes in a gifting-ready box for greater convenience. 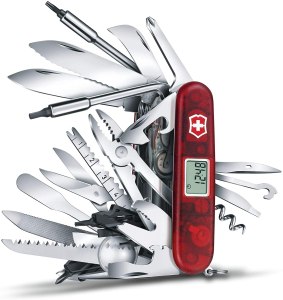