There’s just something about being outside in the middle of the night and looking up at the stars that can really put things in perspective. Without getting too deep or existential, stargazing can be an incredible experience. And the best part, stars are free! Unfortunately, they are also millions and billions of miles away and getting an amazing look at the stars, especially if you live in an area with a lot of light pollution, can prove to be rather difficult. But if you aren’t quite ready to spend thousands of dollars to see further into the night sky, telescopes for beginners are a smart alternative.

Aperture: The diameter of the aperture allows more or less light into the eyepiece. A bigger aperture is better for seeing deep into the night when skies are dark and clear (with minimal light pollution).

Focal Length: This is the distance between the main optic point to where the image is formed. Short focal points create a wider field of view, but objects are smaller. Longer focal points will have better magnification (a larger, more close-up view of an object).

Alt-Azimuth Mount (Alt-az): The system used to control the movements of the telescope. This allows the users to move it vertically and horizontally with the controls.

How We Chose The Best Telescopes For Beginners

Ease of use, power and price were at the top of our list when picking the best telescope for beginners. Of course, there are some options below that are powerful telescopes, but also enable you to learn a thing or two, which isn’t all bad either (remember, knowledge is power).

Telescopes with computerized systems make it super easy for first-time users to start seeing really cool stuff in the sky. And when you’re buying your first telescope, you also don’t want to spend an arm and leg, since you don’t even really know what you’re getting yourself into.

With that in mind, below you’ll find the 10 best telescopes for beginners that will bring out the inner kid in you (or for kids, their inner astronomer).

With full digital control, even the most novice telescope users can find some of the most fascinating objects in our solar system. The Nexstar 5 SE uses a computerized system provided with a handheld control to dial in objects in the sky like Saturn or Jupiter. There’s a number of objects that the NexStar can automatically jump to. And with it being compact and only 15 pounds, you can easily toss it in the back of the car and find your favorite spot to go stargazing. 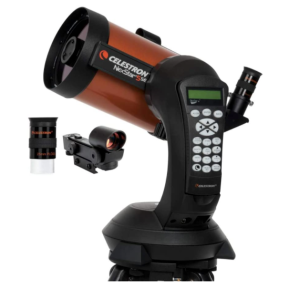 Like the AWB OneSky and 5SE, the 130SLT has a 5-inch aperture to let in plenty of light for image clarity, but where this differs from the OneSky is the computerized object finder to assist beginners in finding objects in the sky. It doesn’t take as much “educational time” (learning how to use the dang thing) compared to the OneSky, but that assistance will certainly cost you more than the OneSky. 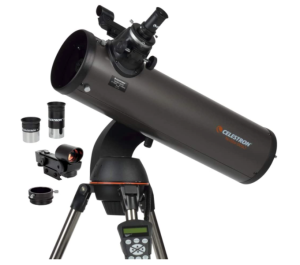 For beginners that like the option of having both manual and digital control, the Orion 27191 Star Blast 6i is a great place to start. It’s a little pricier than other telescopes for beginners, but with a 5.9-inch aperture and two 32mm eyepieces, you get a lot of viewing power and image sharpness for the money, especially if you have access to a really dark place to set up your telescope. And the Intelliscope Computerized Object Locator (the little keypad) can assist beginners by letting them know how close or far away they are from objects in the night’s sky. 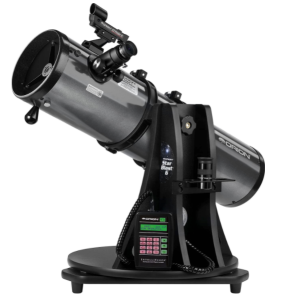 BEST FOR LEARNING HOW TO STARGAZE

Without a computerized system to guide you, you’ll need to manually navigate the night sky, and most likely, you’ll need to align the mirrors inside of the telescope. By learning how to do so, you’ll be a much more intelligent navigator of the stars, and it will only help you as you advance to more precise and powerful telescopes. Like the NexStar, it provides a 5-inch mirror as well as a 25mm and 10mm for seeing deep into the night sky. Keep in mind this is a tabletop unit, and best suited for being set upon a table as opposed to a tripod. 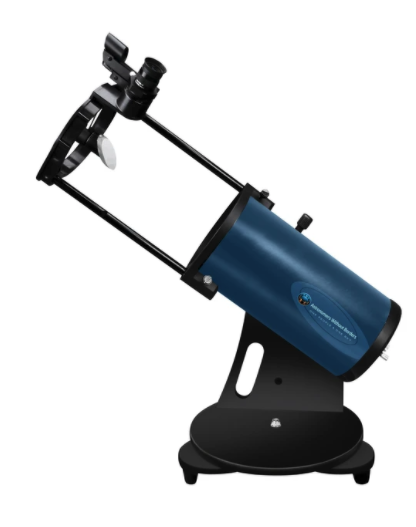 Labeled as a “grab-and-go” telescope, the 6.5-pound Orion 10022 StarMax is a great traveling companion for when you sneak off for a weekend into the wilderness. It’s powerful enough to see objects like Saturn and Jupiter, even for its stumped frame. The Orion uses two mirrors that bounce light from one to the other, back to the front objective, then through the eyepiece. This results in fantastic image quality. It is a tabletop unit, so keep in mind you’ll want to have a flat spot to rest the telescope. 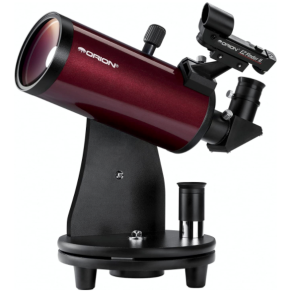 When you have a youngster who is looking into their first telescope experience, The Gskyer Telescope provides an ultra-affordable way to get them their first taste of being an astronomer. With a 2.7-inch aperture and 400mm focal length, it isn’t nearly as powerful, or as sharp, as many others in our list, but it’s plenty for getting great images of the moon and nature watching. It even comes with a remote control and smartphone adapter to take pictures, so you can capture your little stargazer’s first astronomer experience. 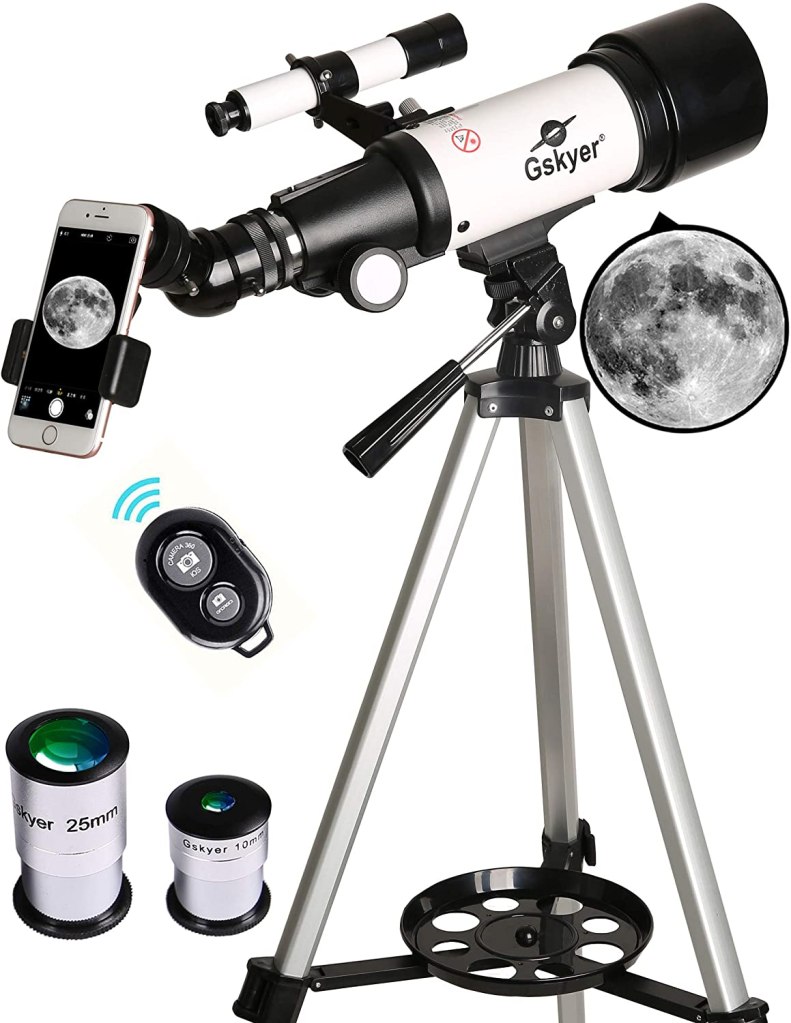 A great camping companion to search deep into the night sky, the Celestron PowerSeeker 127EQ is small and compact to fit right into the back of your car without taking up much room. It features a 5-inch aperture like our best overall pick, but the German Equatorial mount does take more precision than automatic GPS systems, but it will teach you how to correctly navigate the night sky and become a better stargazer. 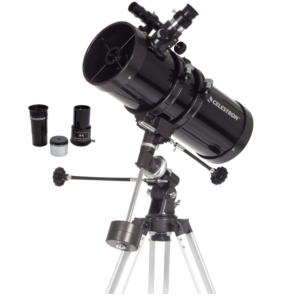 The Celestron AstroMaster is a reflector telescope that has great image quality, even for faint objects in the sky. It comes with two lenses: 20mm and 10mm for extra magnification. The telescope is controlled by two knobs for latitude and longitude and twist slowly for precise movements when scanning the sky for stars and planets. It doesn’t come with any computing system or automatic GPS, so this telescope teeters towards the more experienced end of the beginning spectrum. 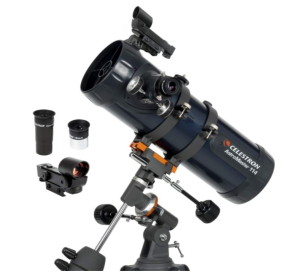 The elongated tube gives the AstroMaster 70AZ the look of a traditional telescope you’d see in movies from the 1980s. That being said, it is also one of the easiest to set up, and great for not only viewing what’s above but also distant objects on this planet (nature watching). You aren’t going to get the precision control like other beginner telescopes using the Alt-Az control, but you can download the Starry Night astronomy software to help you find objects in the sky and get some direction as to where you’re pointing your telescope. 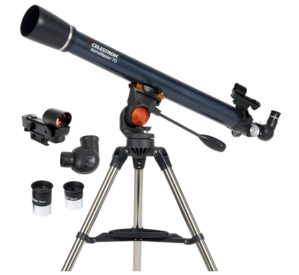 The 10 best hammocks for camping and backpacking