In the world of grilling, there’s one grill that reigns supreme. The Big Green Egg, dubbed as such due to its egg-shaped design and its green hue, is often viewed as the best grill on the market. It’s incredibly versatile and seen as the pinnacle of grills because of its excellent heat retention and ease of use. But how does it fare? Big Green Egg provided us with one of their Large Eggs to test, and after testing, we have some thoughts. Continue on to see our full Big Green Egg review.

As evidenced by its name, the Big Green Egg is, well, big. Clocking in at 162 pounds, the thing is a beast and will take some help to get it out of the car. Lucikly for you, if you happen to purchase an Egg from a place like Ace Hardware, they’ll come to install it for you for free (assuming you’re an Ace Rewards member). We’d recommend this, as trying to tackle this on your own might be kind of tricky (trying to get an Egg in and out of your car in the box is going to be a task in and of itself). Full transparency: A local Big Green Egg sales rep here in the Washington, DC area came over to my rental house with the Egg pretty much ready to go, minus a few things here and there, so there wasn’t much of a setup outside of placing the metal band around the opening latch of the egg.

However, if you were to do this all by yourself, I’d imagine the process would take about an hour or so to align the three interior pieces (the firebox, the air grate, the raised ring, and the cooking grate itself) as well as the outer band, and the lid. The rep and I took about 30 minutes to tackle all of this together. It’ll probably take longer (likely another hour to an hour and a half) if you’re getting a stand to go with it, which we’d recommend.

At its core, the Egg is pretty simple; a vent at the bottom and top of the Egg is what you’ll use to regulate airflow to keep the temperature consistent. The bottom vent is made for significant, sweeping temperature increases, while the regulator at the top is more for fine-tuning. Inside is where you’ll fill the Egg with charcoal before placing the grate back inside for cooking. The ceramic construction is sturdy; there’s no doubt that a Big Green Egg is durably made for the long haul and capable of providing consistent, reliable performance over a long, long time.

Part of what makes the Egg such a great grill is how many different configurations you can use with it. The Egg can be set up to grill food, make pizzas (!), or even act as a smoker. Each of these functionalities is accomplished by just swapping out the internal parts of the egg, furthering its overall versatility.

Sure, the Big Green Egg is easy to use, but it can be challenging to master. My first use of the Egg was in the smoking configuration. I loaded the firebox full of lump charcoal and let it heat up before placing the convEGGtor (yes, a lot of the accessories by BGE come with punny names like this), which helps to deflect the heat and keep temps down. This is a critically important function for low and slow smoking but I didn’t let the Egg warm up enough before putting the disk-shaped converter into it. It took a little bit of time to get the Egg up to the right temperature, but once I got that all sorted, the Egg maintained the temperature pretty consistently throughout the rest of the smoke. 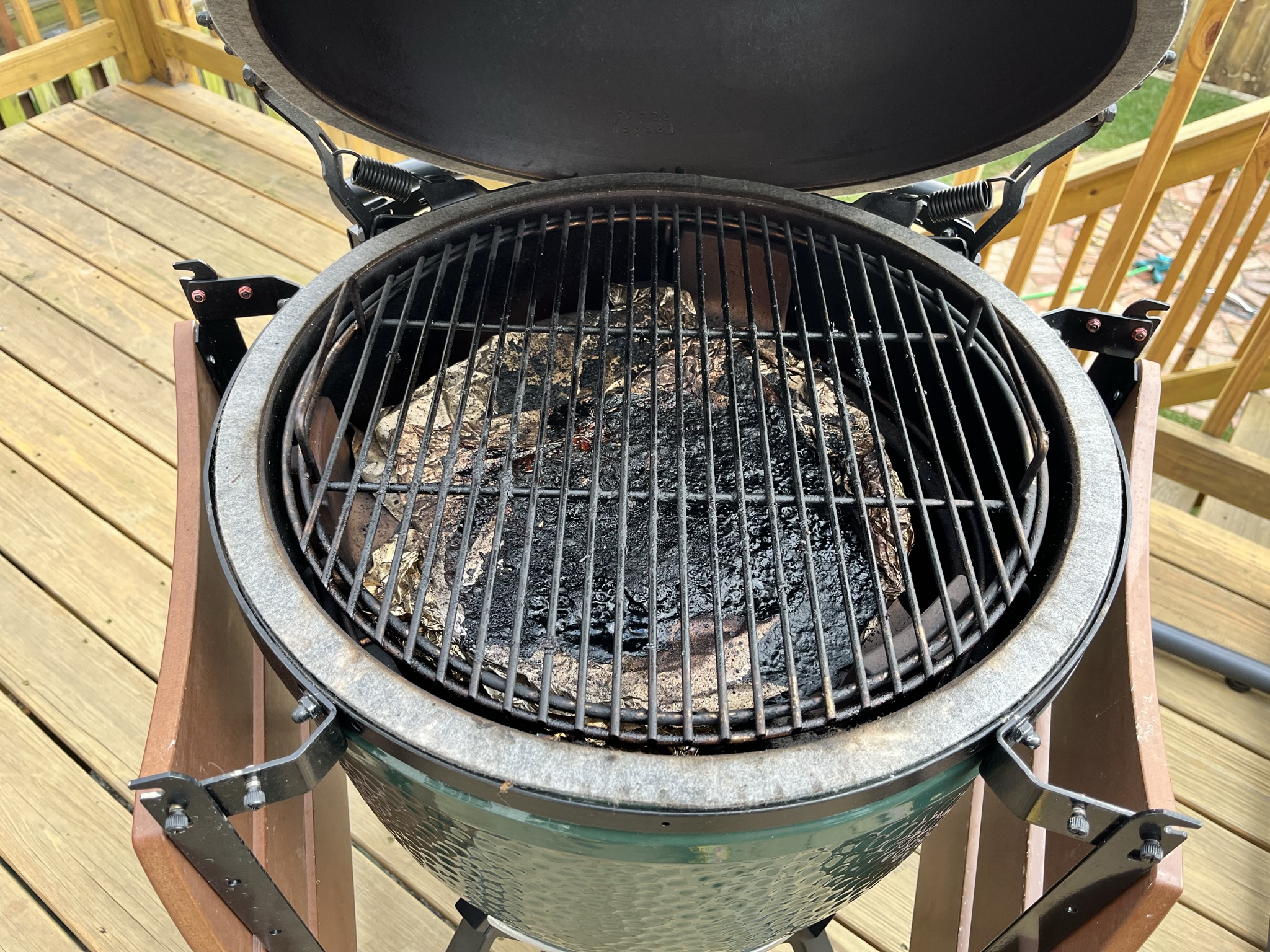 I’m not new to smoking — I’ve used a Traeger smoker for the better part of a year and a half — and as impressive as the taste of smoked meat on a Traeger is, it’s nothing compared to the flavor you get from an Egg. That ceramic construction retains the heat better than the Traeger and allows for an overall more even distribution of heat. You can still find hot spots here and there, but the heat flows more evenly once the lid is closed and things are flowing.

Grilling also provided an equally impressive result. I grilled some steaks on the egg and found the flavor to be outstanding. Even this feels like I’m underselling; there’s such a richness to simple foods like chicken or even grilled veggies. And you don’t get an overwhelming grill taste from the food you might find from a gas-powered grill.

However, getting a handle on heating the Egg can be tricky. The first few times I tried to get up to a temperature of 500 degrees or more, I found the Egg stalling out and not getting much higher than 400 or so. I struggled to find a true solution until I realized the charcoal basket I’d purchased to make cleaning easier was clogging some of the air holes in the cast iron air grate. Once I cleaned this out, the airflow was significantly better and allowed me to get up to those high temperatures quickly. I spent a lot of time poking around on YouTube and in the Big Green Egg message boards to figure out what was wrong, which frequently was very frustrating. The resulting food quality never suffered but certainly made things take much longer to cook. This isn’t a deal-breaker in any capacity, but it’s a point in service of a larger message that using an Egg definitely requires a little skill and much more patience than your typical gas grill or electric smoker. But the resulting food absolutely speaks for itself.

Cleaning the Egg is super easy, too. The bottom vent collects the ash from the lump charcoal, where you can either use a shop vac to get it all out or use a handy Big Green Egg ash tool (sold separately, of course) to scoop it out. Either way, it’s much easier to clean than even my Traeger, which requires you to entirely dismantle the interior to clean out its ash.

I’ve mentioned it a few times here, but where costs can start to add up is in the accessories department. The price of the egg itself is $999.99, while the steel “Nest” rolling stand clocks in at $219.99. The convEGGtor for smoking is a little cheaper at $79.99. Those three pieces are what we’d recommend if you want to have a full smoking/grilling setup for about $1,300. That doesn’t include anything like the side panel tables, charcoal, a grate cleaner or even a fire starter. In short, costs with the Egg can add up pretty quickly. The versatility, durability, and overall taste the Egg provides are well worth that cost now that I’ve spent considerable time testing the Egg, but that doesn’t take away from the initial sticker shock.

Additionally, Big Green Egg sent over the Egg Pizza stone, which I haven’t had a chance to test yet. Once I’ve had an opportunity to dig into it (i.e., making a pizza entirely from scratch and cooking it on the stone), I’ll update this post. I could have made a frozen pizza on the egg, but that seemed like a waste.

If you’re looking for the best of the best when it comes to grills, without question, the Big Green Egg is at the top of the class. Even with the considerable learning curve, the food I’ve cooked, grilled and smoked on the Egg is among the best-tasting food I’ve made. The Egg has already gotten heavy use during the brutally cold winter months, and I anticipate it will be active every day when temperatures heat up. I’m hard-pressed to think of a better constructed or more useful grill, let alone one that’s poised to last me the rest of my life (assuming I take care of it well). That, when combined with that excellent taste, makes for a compelling offering — and one that’s hard to pass up even if it is on the pricier side.

After finishing our Big Green Egg review, we’ll sum it up like this: Yes. If you have the money to spare or want to save up, yes you absolutely should buy it. 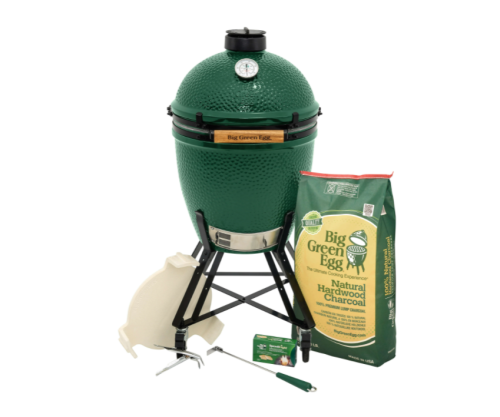 If you want to get a grill that has some of the same features as the Big Green Egg, here are three good alternatives.

In terms of cooking space and power, the Traeger Pro 780 is pretty equal to what you’d find with the large Big Green Egg. Its electric functionality makes it much easier to use than an Egg, but the food isn’t quite as tasty as the flavor you find on an Egg. 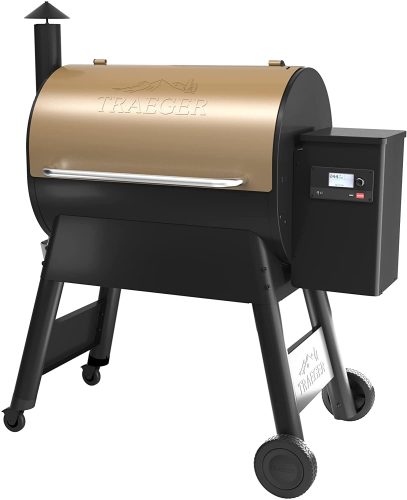 Kamado Joe is the other big name in ceramic grills. This one is basically their version of the Large Big Green Egg but includes a full suite of tools and accessories without having to purchase them all separately. 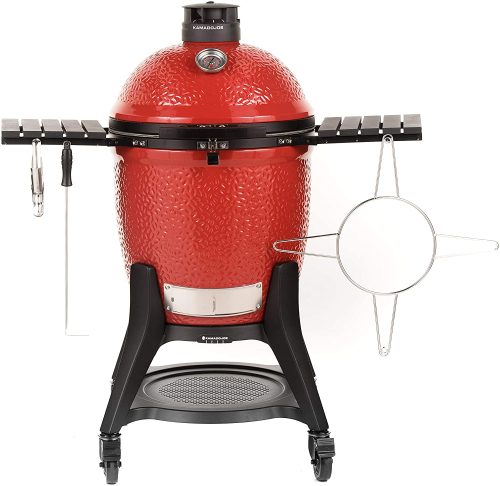 While it is a good bit smaller than the Egg, this kamado-style grill from Char-Griller will absolutely get the job done and is a fantastic value. 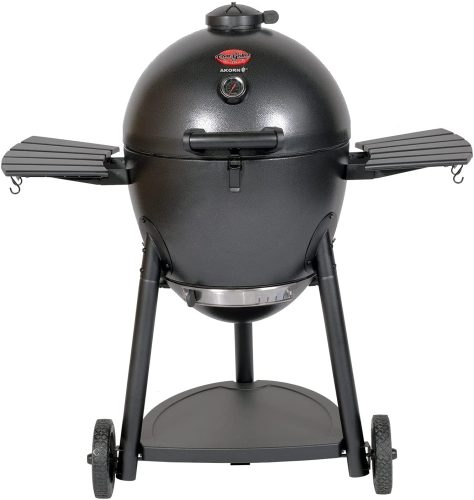 Up Your Grill Game With These Handy Heat-Resistant Gloves