The older I get, the more dadly I become. It’s probably inevitable, and some of you reading this might be able to relate all too well. But one dadderism I’ve picked up in the last few years is the unusual fascination of metal detecting.

Though I have no children, I thought I might fill that “void’ by asking for a metal detector as a birthday gift — the Bounty Hunter Quick Draw Pro. This metal detector is kind of like a child; it makes annoying sounds, it’ll get you dirty sometimes and, if you’re patient enough, it might bring you treasure after it becomes a lawyer.

Furthermore, I thought it would be fun to review this metal detector after using it both with my family in Massachusetts as well as in Los Angeles, where I live, to find different treasures on both coasts.

Is Metal Detecting a Good Hobby?

What began as a love for history transformed into binge-watching History Channel’s “The Curse of Oak Island.” Two brothers and their crew chase a centuries-old legend of a massive treasure buried somewhere on a small island off the coast of Nova Scotia. A huge draw to the show is expert detectorist, Gary Drayton, and his findings in the construction spoils and various stretches of forest across the island.

While the show has garnered its share of criticism, Drayton’s enthusiasm for finding stuff in the dirt inspired me to do the same because he makes it look wicked fun. 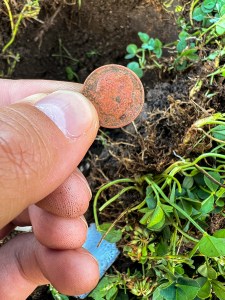 So far, starting out with the Bounty Hunter Quick Draw Pro, I’ve entertained my whole family, my girlfriend, and my best friends’ curiosities of “is there something buried over there?” It’s ridiculously fun and, aside from getting you outside, it’s a great way to clean up some of the trash hidden in your community.

What’s In the Box

My Bounty Hunter Quick Draw Pro came from Dick’s Sporting Goods because we found that they have the best deal for beginners, which includes:

You’re going to need at least a pinpointer to, well, pinpoint objects in the dirt you dig up. These can easily cost north of $50 so we opted to get this great bundle deal to save money on metal detecting accessories. 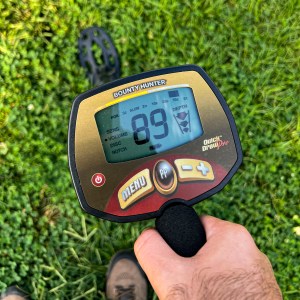 It’s important to note that while the coil is resistant to fresh and salt water, it’s not specifically designed for detecting in wet sand. I thought that was a bit odd, but that’s pretty normal industry-wide. Also, for machines that detect better in wet sand, the price might be too high for a beginner.

Aside from the easy-to-use detector, the most important tool included with the Bounty Hunter Quick Draw Pro is the user guide, which I highly recommend reading if you’re a first-time detectorist. Everything you need to know to get started is printed right in the guide.

After reading the guide, using this metal detector was quite simple to use. First, we assembled and adjusted the height of the handle, shaft, and coil. From there, we tested the coil over coins and jewelry we had on hand to understand how it reads different metals.

As of now, I’ve used this metal detector on both sides of the country. The LCD screen makes it very easy to gauge what’s happening beneath the surface of dirt and sand; the hardest part of being a new detectorist. The large on-screen numeric target-ID works in tandem with the three-tone audio to describe the signal being read by the coil so you can gauge whether it might be trash or something more desirable. Reading these measurements takes practice, but after a while, you develop a deeper knowledge of this detector’s sensitivity. 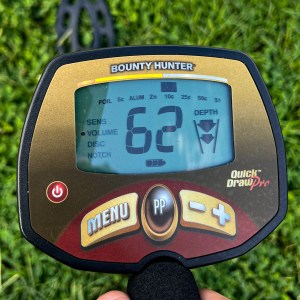 The target depth indicator and discrimination capabilities are two features that help when starting out. The target depth indicator breaks down a target’s placement at three, six and nine inches. You can also refine your dig by finding where the depth is at its shallowest, meaning you’re more likely to be right above the target. The discrimination capability is great for avoiding unwanted objects like nails and screws, especially if you’re in an area where modern construction may have taken place.

Some detectorists choose to use headphones to hear the detector better. If you’re going without, it helps to have volume controls because the Bounty Hunter Quick Draw Pro can get extremely loud. Without headphones, I like to set it around level four so as to not disturb the peace.

Here’s What We Found in Massachusetts

We found a lot of trash, but that’s part of the game. Frankly, metal detecting is a great way to clean up the woods, a park or a beach. In addition to finding recent coins, fishing lures, and rebar, we’ve found some fascinating relics.

Our very first target was one inch below the surface and “screamed” at us from the detector, marking in the 60-70 range on the target-ID scale. What we dug up was a set of tags from a dog collar. The tags had an address on them that happened to be down the street, so we brought them back to the house. There, we met Smokey the dog and his human and learned that they had lost the tags over five years ago on a walk. Smokey licked my hand as if to say “thanks, dude.” 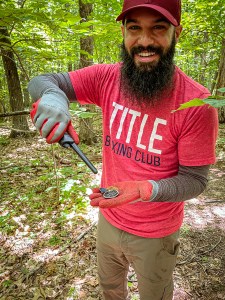 The area in which you detect determines the potential targets. The woods in which we were detecting was used as farmland from the 1750s to the early 1900s. We found a bunch of cool stuff, including a musket slug, a shotgun shell and a bunch of old ox shoes, seen below. I knew they were ox shoes from watching Gary Drayton, mentioned earlier, find them all over Oak Island. 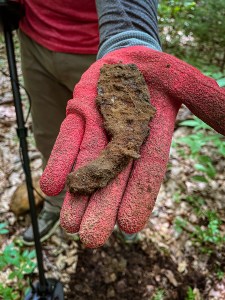 Here’s What We Found in California

California doesn’t have the same type of historic activity that the East Coast has, so in most cases, the types of treasures to be found are from modern times.

Like Massachusetts, after combing Malibu and Santa Monica beaches, we picked up a whole lot of trash. This is kind of a win because that’s less trash that’ll end up in the ocean and it keeps barefoot beachgoers safe.

We did have some success going through a local baseball field, however. Aside from the common bottle cap and pull tab, there’s quite a bit of change to be found. That was the case for this field. If nothing else, it served as a great practice round of how to use the Bounty Hunter Quick Draw Pro. 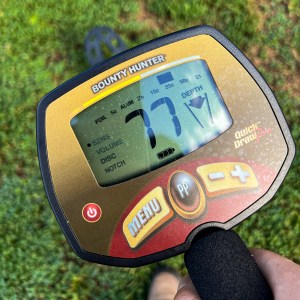 In the photo above, you’ll see a target on the LCD screen showing up as 77 on the ID scale, with a depth of one arrow (zero to three inches deep), and it also marked as a potential quarter. Sure enough, sitting there just out of sight, was a shiny new quarter right on the surface. Not a crazy haul, but this quarter was part of the 55 cents and weird piece of metal we landed that day. See if you can find it in the photo below. 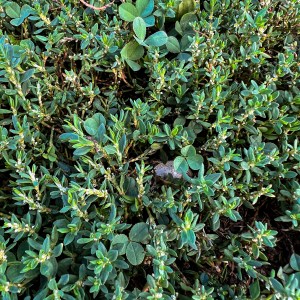 The Verdict: Should You Buy the Bounty Hunter Quick Draw Pro 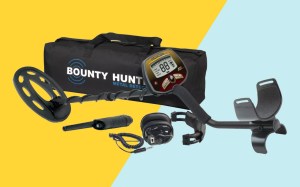 When it comes to hobbies, it can be easy to get tired of them. To set yourself up for success, it’s paramount to start with an educated understanding of how to use the applicable tools. That’s the case with the Bounty Hunter Quick Draw Pro.

We recommend this metal detector for beginners because of how easy it is to use after simply reading the instruction manual. The LCD screen clearly displays everything you need to get started on finding treasures as a new detectorist and the tools in the bundle package serve the beginner well.

Although there are dozens of less expensive metal detectors available, some as low as $60 compared to the $300 pricepoint of the Bounty Hunter Quick Draw Pro, they won’t come close to serving the new hobbyist the way this detector does.

Yes, metal detectors absolutely do detect gold. From what I’ve learned so far, it may be tricky to identify gold on the indicator screen because gold registers in the same ballpark as other, undesirable targets, like aluminum, pull tabs.

Can You Metal Detect In State Parks?

Yes. How do I know? On my birthday, my Bounty Hunter Quick Draw Pro’s first adventure in Los Angeles, my friends thought it would be funny to hide my phone in the sand for me to find. Well, I found it, and the machine picked it up flawlessly.