I’ve recently undergone lots and lots of product testing regarding the world’s best backpack coolers. Why? Because it’s summer and I live right next to a lake. I find myself at said lake, like, every day. That said, I won’t sit by any lake without an alcoholic beverage. It’s like bringing a knife to a gunfight. Just sounds silly to me.

A few weeks later, I got news: ICEMULE, another incredible cooler brand, just launched the world’s first transparent cooler. Yeah, you read that right. Clear. That’s ICEMULE Clear, to you.

While I underwent testing on backpack coolers, I didn’t leave out ICEMULE. The brand’s 15L Backpack Cooler was a serious competitor amongst the rest, so we ranked it second overall. Because of this, I had high hopes for the ICEMULE Clear. Specifically, I’d hoped the cooler would cool drinks properly with intense insulation, keep ice fresh and solid for long, hold several beverages at once, and be easy to carry and clean.

So, did the ICEMULE Clear live up to my expectations? See below and find out. 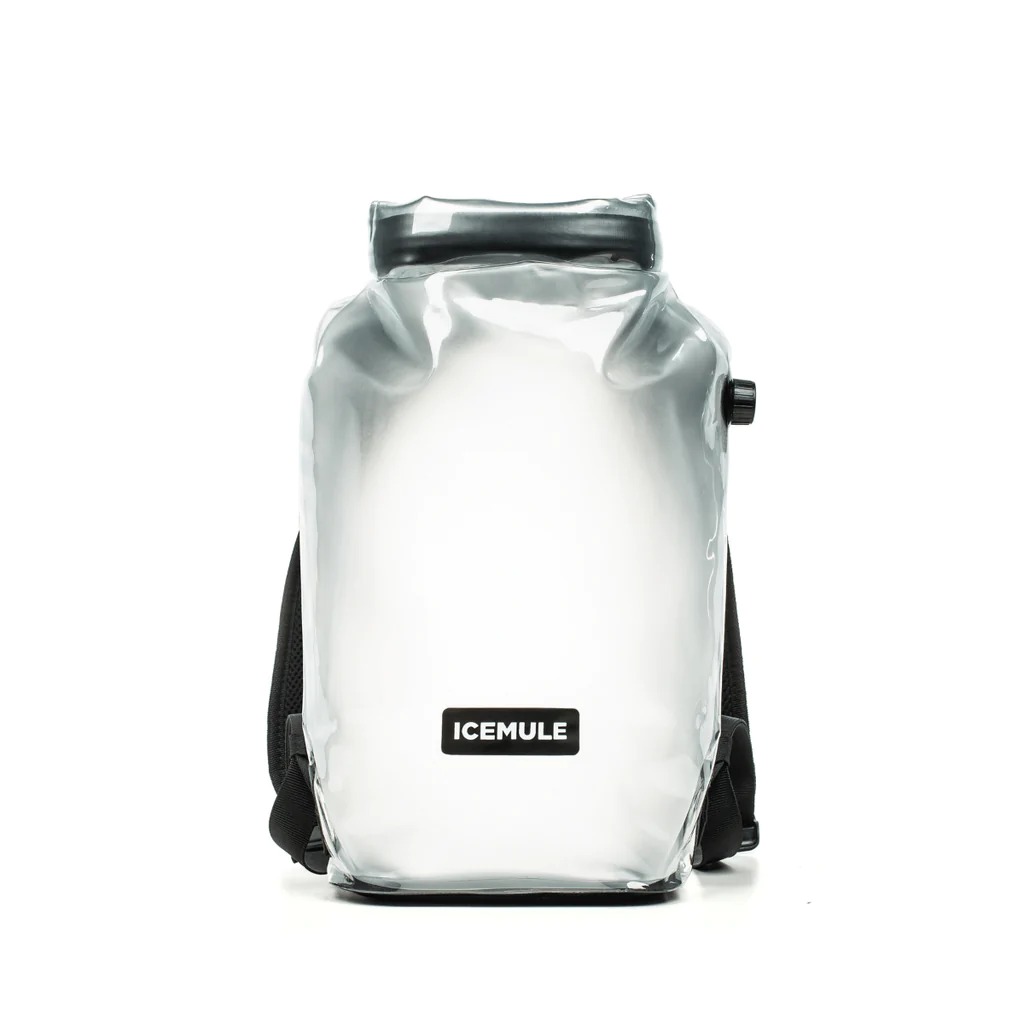 Visually speaking, the ICEMULE Clear is a standout. It’s the world’s first clear backpack, period. I’m talking hard coolers, soft coolers, backpack coolers, cooler with wheels, you name it. This is a game-changer in itself. The backpack is built with what ICEMULE calls their patented IM AirValve, air insulation technology that supposedly helps keep ice frozen for 5-7 hours total. All you have to do is open the valve, fill the bag, and blow into the valve, so the bag is filled with air, and your drinks should be good to go. All in all, the concept of this puppy is short of incredible.

The bag uses tough “Muleskin” in its design, which feels like a thicker-than-average plastic. This is said to be insulated, but the interior felt like the same material as it did on the outside. Every other backpack cooler I tested had an insulated interior with a (mostly) silver color. Of course, this couldn’t be the case due to the clear nature, but I figured ICEMULE’s insulation was a little more futuristic.

In addition to these features, the ICEMULE Clear goes without a zipper. Instead, you roll the top and buckle it up when you want to close the bag. This is an excellent feature but feels pointless in some facets because a zipper, in my opinion, is much easier. 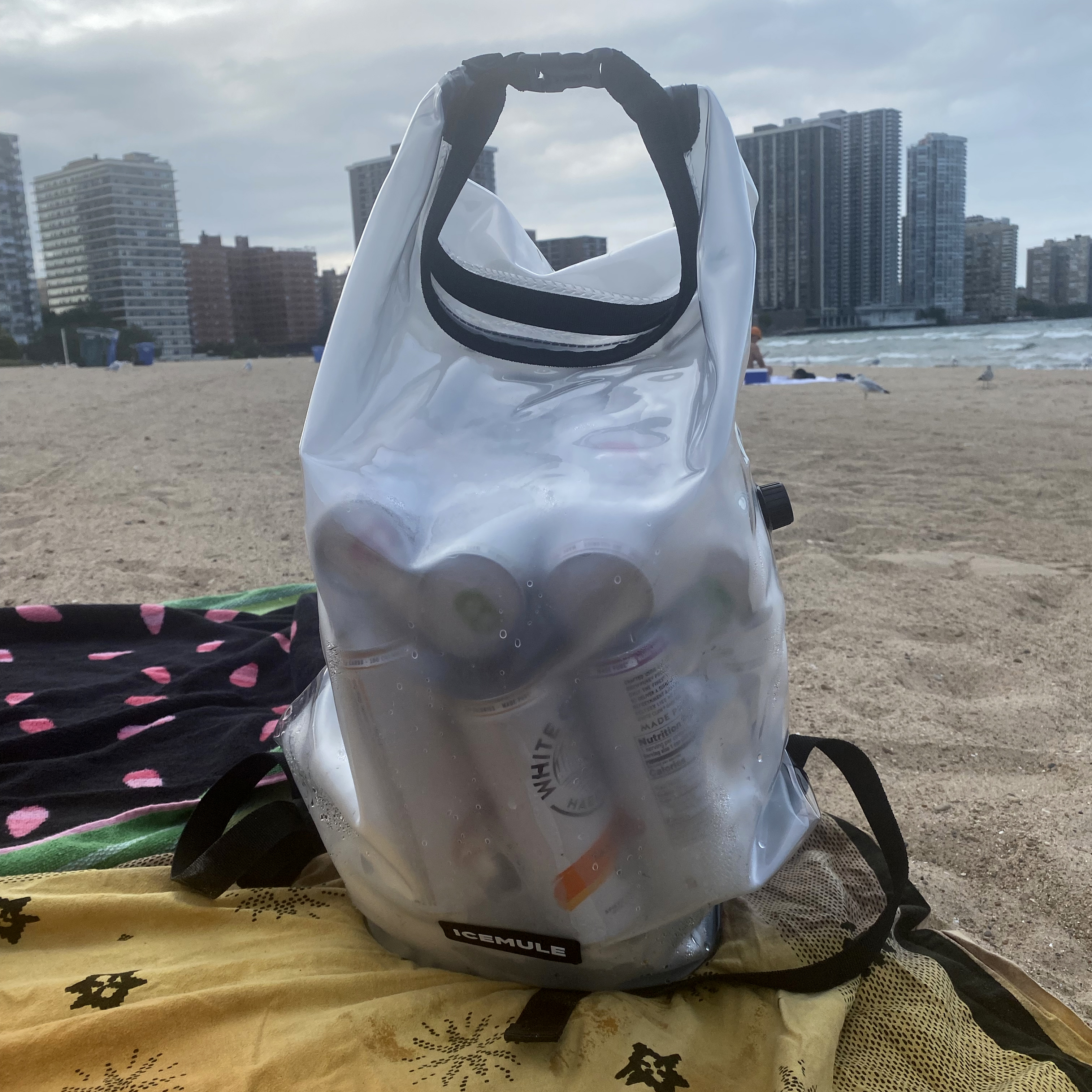 How the ICEMULE Clear Performs

This is where I might bring a couple of tears because I surely shed some. Just kidding, I didn’t, but I came close. I was not impressed by the ICEMULE Clear’s performance, which was disappointing. Let me tell you why.

Before arriving at the beach, I parked a few blocks away and had to walk for a few minutes until reaching the water. That’s when I noticed I was a little uncomfortable with the clear material. In my head, clear felt neat because… well… clear. But clear is also revealing. Heading to a beach where I was suddenly unsure whether or not alcohol consumption is allowed made me rethink the clear choice. White Claws were blatantly seen by anybody passing by, which is my fault for packing them, but it still felt slightly invasive no matter what I had inside.

On my walk, I kept feeling drops fall on the back of my legs with each stride. Initially, I thought it was starting to rain, which was a huge bummer. But no, it was an even bigger bummer: There was so much condensation on the outside of the bag that it kept dripping on my legs and butt as I walked. This issue didn’t happen with any other backpack cooler, making this problem a total first. 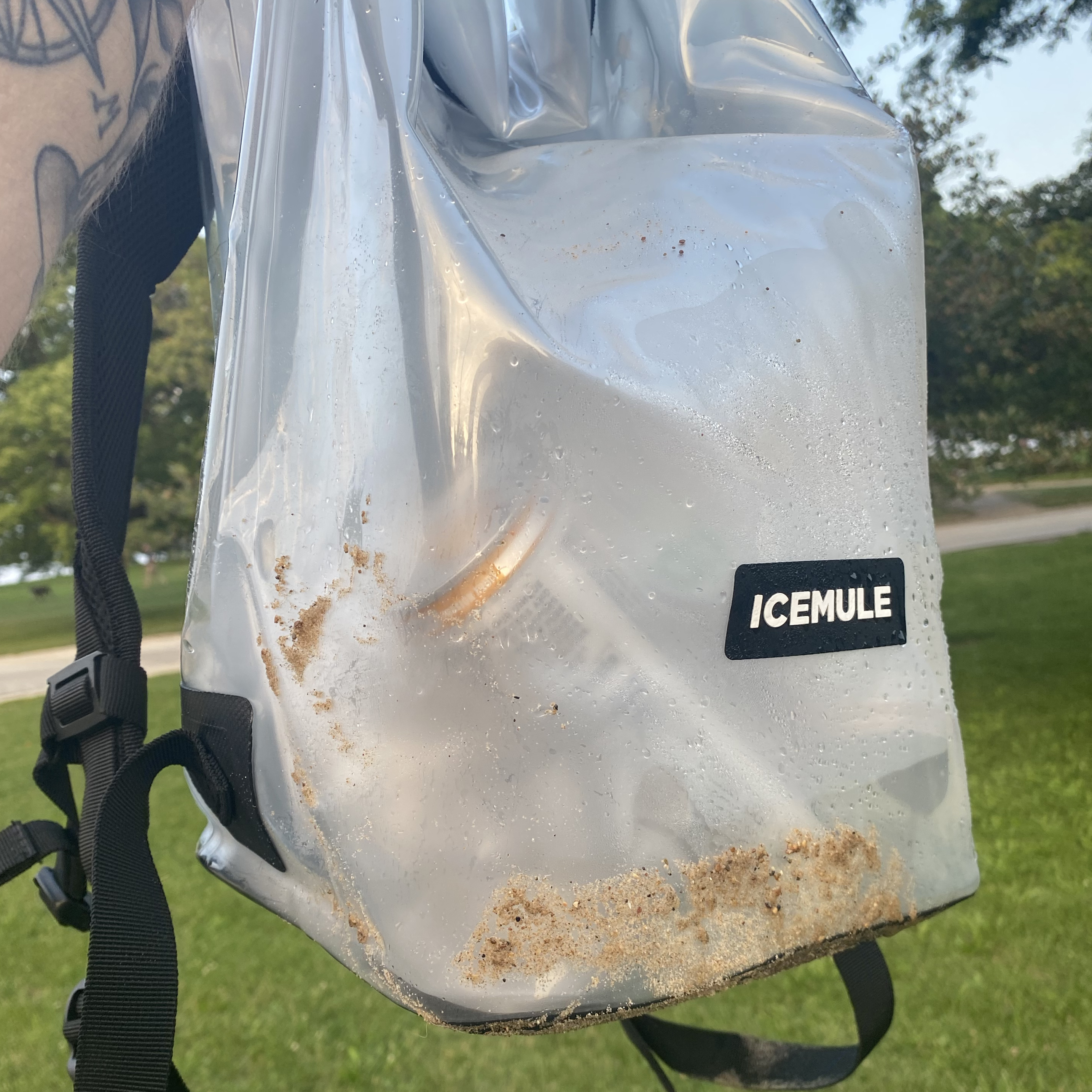 Condensation and sand on the ICEMULE Clear Tyler Schoeber | SPY

When arriving at the beach and setting the bag down, I tried to keep the bag on my beach blanket to avoid sand sticking to the side. Usually, this wouldn’t be an issue, but I didn’t want to take any chances because the condensation was so heavy. What happened as soon as I sat? I accidentally kicked the bag over, and it was a sandy mess from then on.

The beach day started a little cloudy and a bit chilly, but the ice melted from the moment I got out of the car. Once the sun came out, the ice kept going and going and going. No, the ice didn’t melt entirely to water, but it did melt quite drastically compared to every other backpack cooler I’ve used. I’m assuming this is because every other backpack cooler I’ve used keeps drinks and ice in dimmer or even pitch-black lighting. Because the ICEMULE Clear is clear, nothing is blocking the world’s exterior. The contents see the sun just as much as you do. That said, this is likely what led to the faster melt. That said, the ice didn’t last 5-7 hours, as ICEMULE said. Not even close.

I left the beach with cold drinks, sure, but also with a bag full of water and melted dreams.

Is There Anything the ICEMULE Clear Is Useful For?

Sure, the ICEMULE Clear is a useful backpack cooler in some instances. Lots of music festivals do not allow for coolers to be brought in. Typically, vendors will open your drinks for you even before you purchase them, but this can potentially be a great festival bring-in if you can avoid both factors.

In addition, the ICEMULE Clear is an excellent option to bring out to tailgates. It’s not long-lasting and typically, so aren’t most tailgates. That said, this could be a fun bag that will get you some attention and keep drinks cool for as long as your tailgate goes. 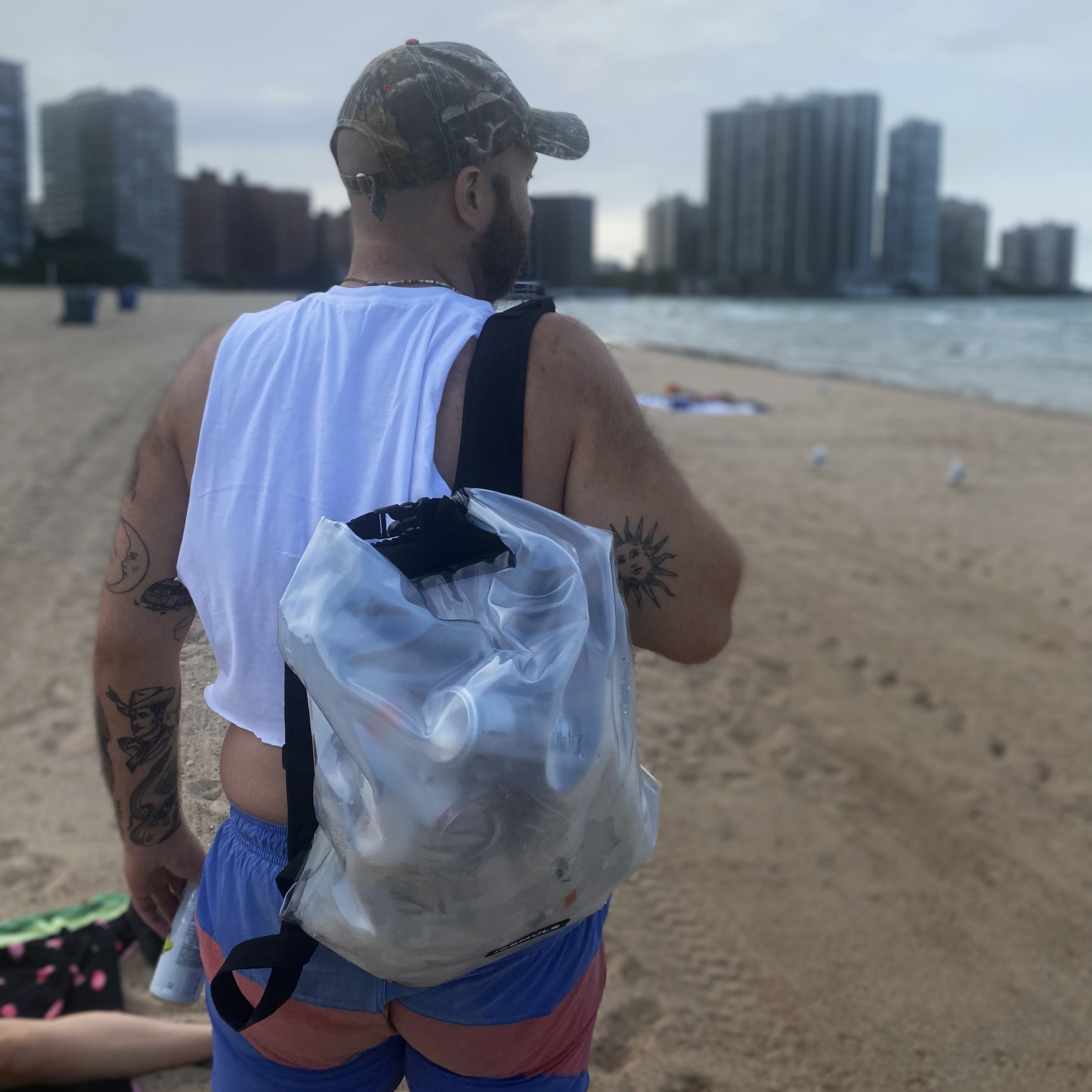 Should You Buy the ICEMULE Clear?

But hey, if you want to try the ICEMULE Clear for yourself, go for it. Prove me wrong. If you still have interest, snag it for yourself below.