We’ve written about a bunch of Jackery products on Spy before — from their portable generators made for emergency backup to their 100W phone-charging solar panel. Jackery has seven different generators that range in wattage and charging abilities, all of which would be excellent companions on your next outdoor adventure (or in an emergency power blackout). Each of the generators can be charged via a wall outlet or a solar panel, and none use gasoline, making them a cleaner alternative to gas-powered generators that perform similar functions.

When I was offered the chance to test out one of their most powerful generators, the Jackery Explorer 1500, I jumped at the chance. You can find my full review below but, spoiler alert, I was not disappointed. In this review I’m going to cover: 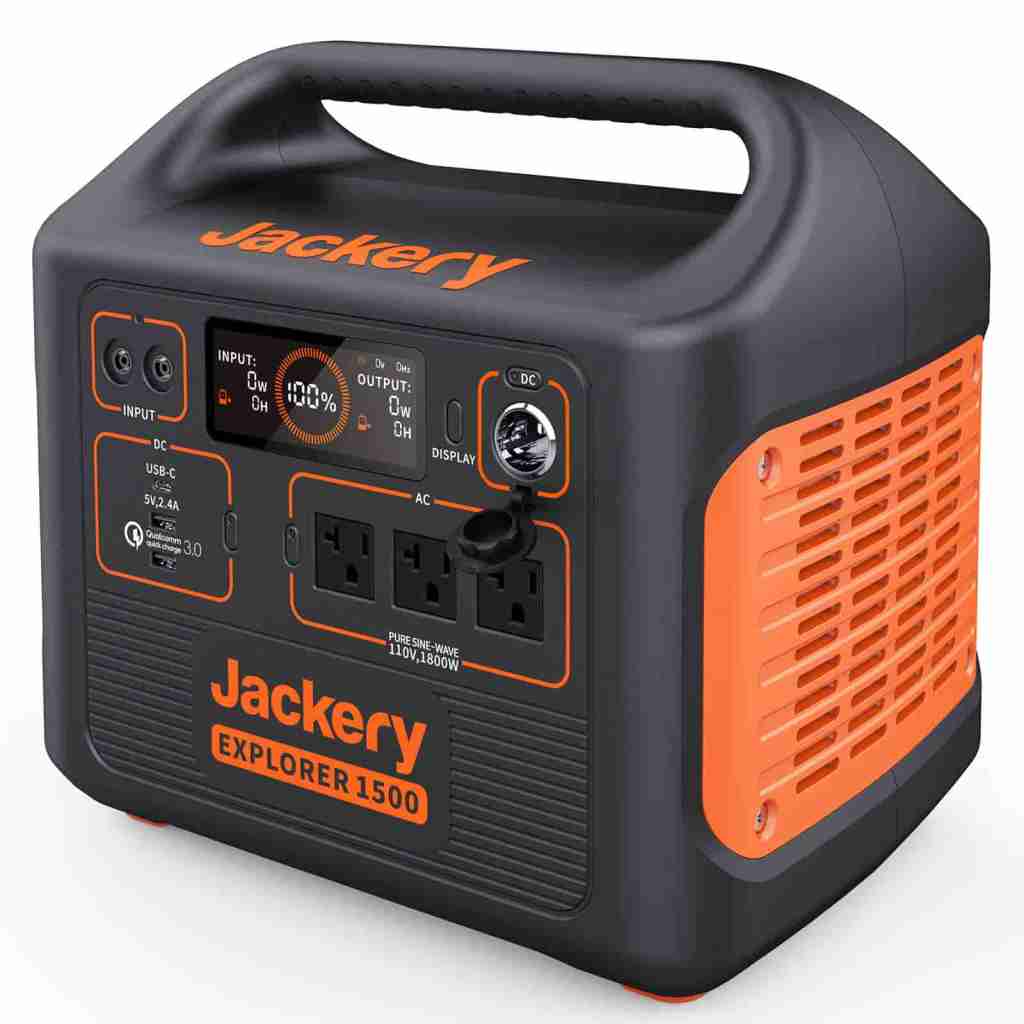 While I tested the Jackery Explorer 1500, the Explorer power station comes in a range of models to suit a variety of budgets and energy needs. Unless you want to power large appliances like air conditioners or refrigerators, you probably don’t need that much energy, and thankfully they’ve got plenty of options in a smaller wattage range. The Explorer power station comes in 2000W, 1500W, 1000W, 500W, 300W, 240W and 160W models. Like the 1500W model we tested, all of these generators run on clean power and are highly portable.

For the average person, we’d recommend the Jackery Explorer 240. For reference, the 240 model can charge a phone 16 times or run a TV for 3.5 hours before it needs to be recharged. 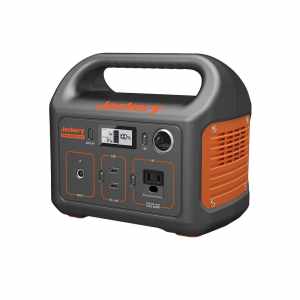 How the Jackery Explorer 1500 Works

The Jackery Explorer 1500 (1488 running watts) came in a few different boxes, as I also got to try out two of their 100W solar panels that I used to charge it. The generator itself comes with three different options for charging it: solar input which takes about four hours, an AC power outlet which takes about two hours and a car outlet if you’re on the go — which will take about 13 hours total. Once we got the Jackery unboxed we set it up in my backyard in California where plenty of sun shines every day. Attaching the solar panels to the generator was easy via a few cords, and once it started charging it was very easy to view its progress on the smart LCD screen on the device itself. 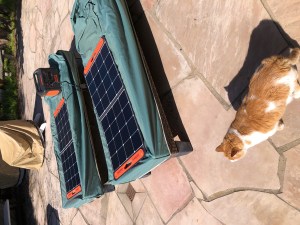 Jackery Explorer 1500 being charged by two 100W solar panels. Also, a photobomb by my cat Buzz. Image Courtesy of the Author 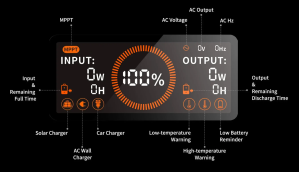 The LCD screen has a variety of information on it and it all comes through very clearly when you’re using it. We left it to charge for an entire day and came back to it ready to go. Now, the charging began.

The Jackery Explorer 1500 has a bunch of ports on the front including three AC outlets that feature 110V, 1800W and 3600 surge power. It has a 60W USB-C port which I love because many of the more recent Apple chargers are USB-C, so plugging in my iPhone was easy. It also has a Quick Charge 3.0 port via USB-A and a regular USB-A port, and a 12V car port for car chargers. It can charge multiple devices at the same time with ease, and I was able to charge my phone completely without taking a sizable chunk off of the power station’s charge. The charging ports all have buttons next to them that you press to activate the charging, making it a safer and more energy-efficient device in general. We charged our phones, plugged in our toaster and blender and left a lamp plugged into it all day. It charged and/or ran all of the devices like a charm. 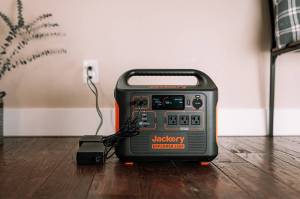 If you plug the Jackery into your standard wall plug it’ll recharge to 80% in two hours, and you can recharge it via solar panel as well if you’re in nature and off the grid. This is what differentiates the Jackery Explorer 1500 solar generator from a traditional generator — it can run and recharge itself on just the sun and requires no use of gasoline, fossil fuels or other environmentally degradative materials. This also means it’s quieter, creates zero carbon dioxide or pollutants, and costs almost nothing in fuel or maintenance. 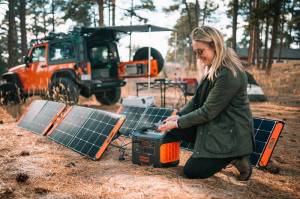 This generator has a ton of pros — so I’ll try to be brief. It’s very quiet to operate, in fact I don’t think I ever noticed it making any noise. It’s also very well-designed, in terms of its usage and its look. The plugs all work really well, it charges quickly and the design is very intuitive. The LED screen is also very easy to read and it always displays the clearest metrics so you always know how much charge it has left.

One question I was pondering the entire time was whether it was a generator, in that it was able to charge devices whilst charging itself, and therefore could run continuously in an emergency situation, or whether it’s really just a huge battery that charges via the sun. We decided to test a simultaneous charge while solar charging to see.

We plugged in the solar panels and began charging the Jackery, and also plugged in a lamp and left everything connected all day. The Jackery ended the day fully charged, and the lamp had been on the entire day — success!

It was able to charge in the sun and power things at the same time, which is what brings it closer to a generator and closer to a device that would be useful in an emergency situation, as well as an off-the-grid situation while camping. I reached out to the Jackery team to see if they recommended simultaneous charging and they said they didn’t due to the change of a power surge overwhelming your device, so keep that in mind.

Now for some cons. It’s a very heavy device, so I wouldn’t recommend it for older folks or for a backpacking trip where you’re carrying everything with you. Our solar charging also happened a bit slower than the four hours promised, it took more like six with some clouds in the sky. Also, due to the fact that it’s not exactly meant to charge itself and run other devices at the same time — I wouldn’t recommend it for emergency situations where you’re trying to run your fridge or other large appliances in a blackout. 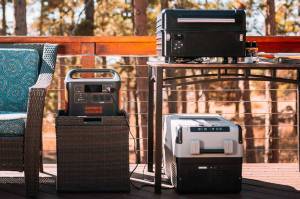 You Should Buy It If…

That brings us to the final section — who and what it’s meant for. This is the perfect generator if you’re going car camping or heading out in an RV and want a powerful generator for charging larger devices, and many devices at once. The solar charging is easy and it’s a convenient station for plugging in your phone before a hike or running the cooler during a day in the park.

If you need a generator for outdoor excursions or want an extra one for lower-intensity jobs like running kitchen appliances, it’s perfect. If you’re looking for a clean, eco-friendly generator that doesn’t run on gasoline and emit all sorts of fumes around your kids and pets — this one or any of Jackery’s other generators are solid options.

I’m a big fan of Jackery and their products and this is one I definitely recommend, for the right scenarios. It won’t run your entire house for a week if your power is out, but it’ll make sure your phone is charged and coffee machine can run — which are just as essential if you ask me. 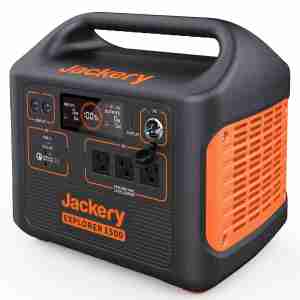 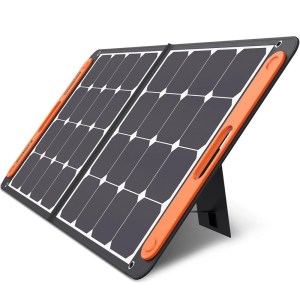 If You’ve Got a Smaller Budget, and Lower-Voltage Charging Needs

The Jackery 1500W power station is great, but it’s expensive and heavy-duty. You might not need that many volts, and thankfully they’ve got plenty of options in a smaller wattage range. They make power stations with 2000W, 1500W, 1000W, 500W, 300W, 240W and 160W. All of them are built with different charging options, run on clean power and are easy to carry via a sturdy handle. If you’ve got a bunch of outdoor excursions planned or are in the market for a well-designed generator, we recommend checking out their entire line.

Here are two of Jackery’s more affordable generators that are perfect for smaller-scale charging needs like making sure your phone doesn’t die in the middle of nowhere, or that your GoPro is ready for the day’s adventures. In a blackout, they can also ensure your phone stays charged and small appliances keep running.

This is their most affordable generator, and is built for charging phones, tablets, GoPro cameras and other smaller electronics while you’re out in the woods. It’s got a 167 watt-hour lithium-ion battery pack build inside that requires no gasoline to run. This means no fumes, no clanging and no fuel to add to your already jam-packed car. It’s equipped with an AC outlet, a USB-C port, two different USB-A ports and a standard DC 12V port as well. It’s also compatible with the Jackery Solar Saga 60W/100W solar panel that’s sold separately. 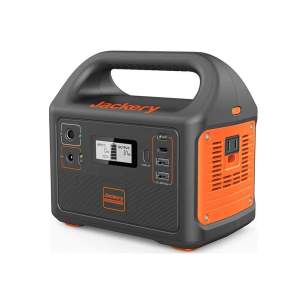 This is the next step up in the Jackery line of generators and is equipped with a 240 watt-hour battery pack that can charge a laptop, fan, mini cooler and other larger devices. It’s built with a solid handle that makes it easy to carry and a small LCD screen shows the battery levels of the generator clearly so you always know how much juice is left. It’s equipped with one AC outlet, two USB-A ports, a DC carport so you’ve got a variety of charging options. This generator can also be charged via a wall outlet, car outlet, other generator or solar panel.

For camping trips and emergency prep, this is a more than solid option for smaller households.