Though most people will probably be fine with a general-use pocket knife, the best OTF knife could be a lot more useful for your needs.

First, you might be wondering: what is an OTF knife?

Read on for a basic primer on this unique alternative to fixed-blade knives. And if you’re just looking for the best OTF knives for your personal EDC, then scroll on!

What Is an OTF Knife?

OTF simply means out-the-front, so an OTF knife, also known as a sliding knife and telescoping knife, is a knife where the blade comes out the front of the handle in contrast to folding knives that come out the side of the handle and fixed blades that do not move at all.

Non-automatic knives are not subject to any special regulations beyond general knife laws, such as those dictating the length of the blade.

Automatic knives are a different story. They are regulated both federally, through the Federal Switchblade Act, and at the state level. For the most part, at the state level, they are entirely legal to manufacture, purchase, own and use. But some states do have regulations — including seven states where automatic knives are completely illegal — which are listed below, according to the American Knife & Tool Institute:

To put it all together, as long as the automatic knife is legal in your state and you do not carry it on federal property or carry it into a state in which it is illegal, possession and use is entirely lawful.

Now that we’ve got our basic facts about the kinds of OTF knives and their legality, it’s time to actually check a few out below. For the most part, we found great automatic knives, but we also found some spring-assisted sliding knives too, in case you’re in one of the bad states.

So, even if you don’t need an OTF knife, as long as you’re careful with them, they’re extremely useful, pretty fun to play with and make for a nice change of pace from your regular everyday carry.

You can always trust Smith & Wesson for quality weapons and we really dig the Smith & Wesson OTF Knife. With a 3.5-inch spear point blade, serrated edge and spring-assisted opening, it’s safe and easy to use, versatile and fairly priced for its high quality and the amount of use you’ll get out of it. Finally, this knife also features a glass breaker for emergency situations. 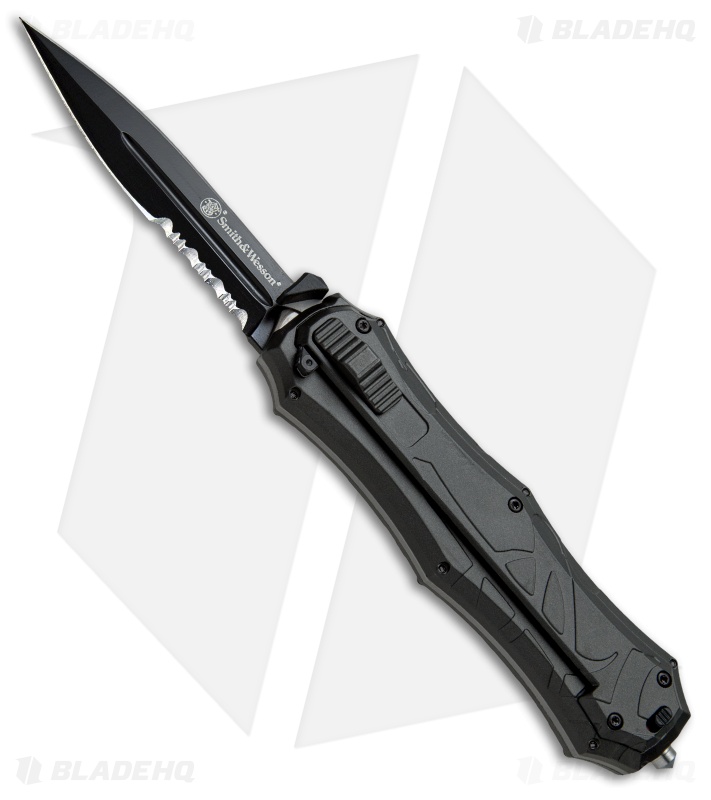 Smith & Wesson makes some of our favorite self-defense weapons, so it’s no surprise they’ve nabbed the top two spots on our list of the best OTF knives. This spear-tip blade is very similar to the knife featured above, but with a few additional features (it also lacks a serrated edge). This OTF knife features a 3.6-inch black stainless-steel drop point blade and black aluminum handle. It also comes with a safety lock and pocket clip for added safety and convenience. Like the previous pick, this Smith & Wesson OTF knife also has a glass breaker on the bottom handle. 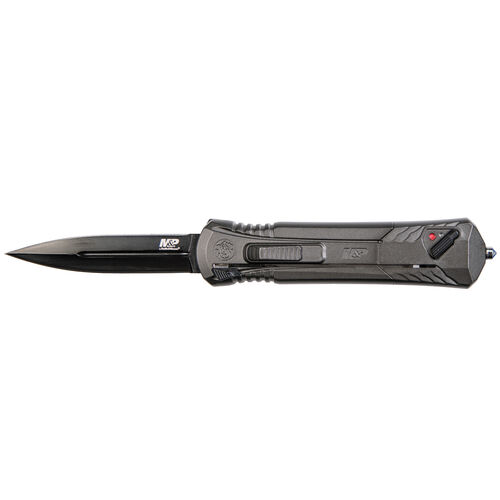 For the first fully automatic knife on this list, we like the Boker Plus Lhotak Eagle Dagger. Smooth double action makes opening and retracting the 3.375-inch blade a breeze and you won’t have any slippage on the textured thumb-slide either. The aluminum handle is anodized for corrosion resistance and the black blade is made from high-carbon, high-chromium D2 steel, so it’s extra tough and won’t corrode as easily. 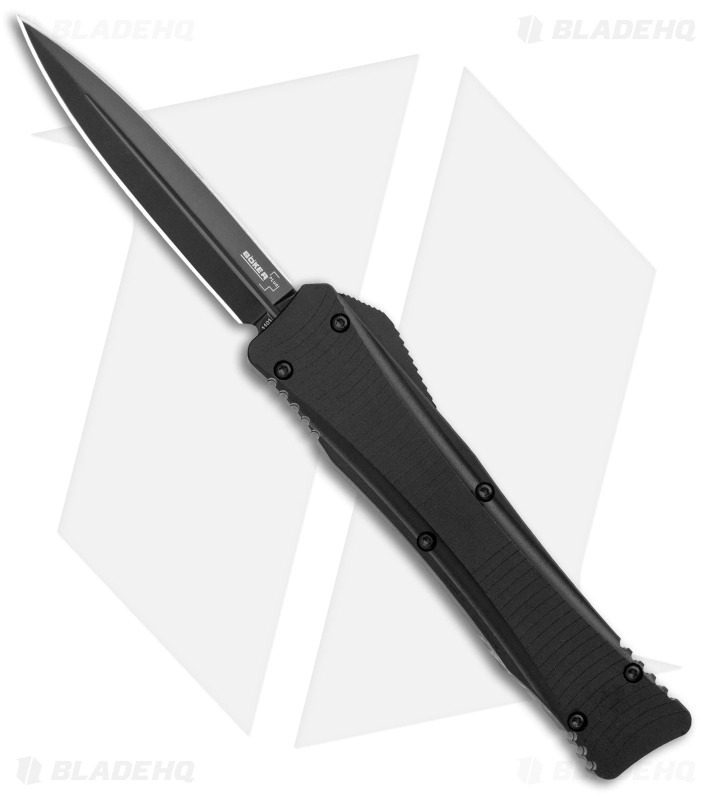 The AKC F-16 D/A Bayonet OTF Automatic Knife has a modern look and great function that we love. With double action, all you have to do is push the thumb slide up and down to release and retract the 3.375-inch blade. Beyond that, it’s got a simple, modern design with a cool green camo aluminum handle. If you pick this OTF knife up, we promise you’re going to want to make it your new everyday carry. 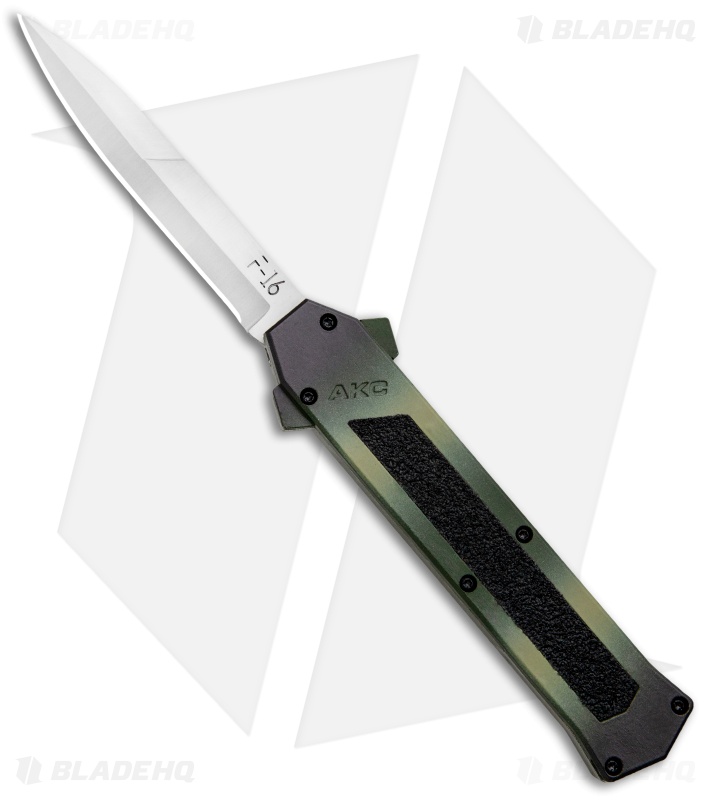 It’s easy to get a lot more expensive than the Schrade Viper OTF Automatic Knife, but it’s pretty difficult to get much cheaper. But despite the friendlier price for an automatic OTF knife, this is still a highly useful and functional knife. The high-carbon stainless steel tanto point blade is tough and perfect for piercing and stabbing in an emergency situation. Though this knife only offers smooth single action, the bottom actuator works great to slide the blade back into the handle. Sure, double action would be nice, but some features have to go in the name of affordability. 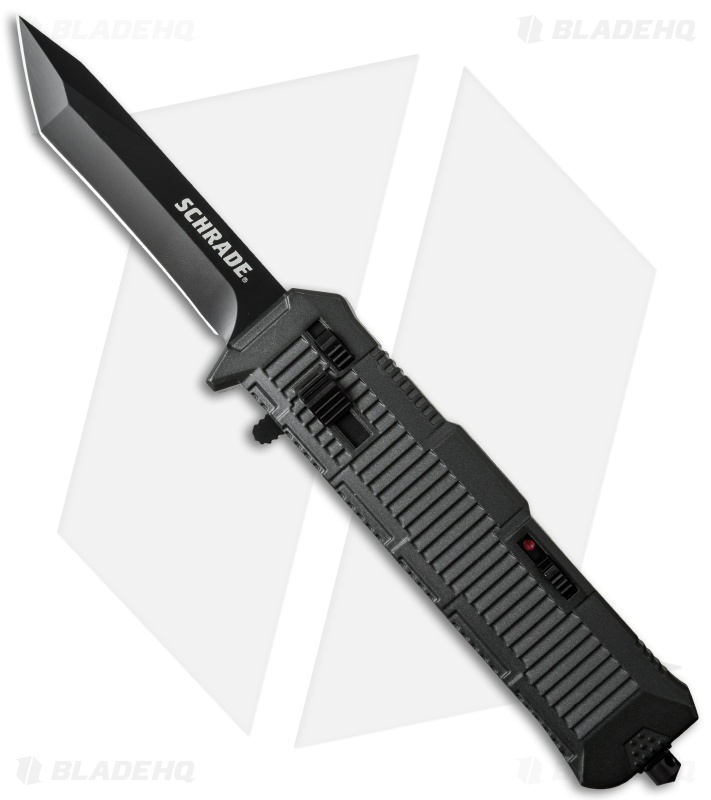 The Kershaw Kapsule Manual Sliding Button Lock OTF Knife is about as stripped down as OTF knives get. The glass-filled nylon handle is lightweight and easy to handle, the blue-anodized aluminum button slides up and down with relative ease and the 1.9-inch spear point blade is small but functional. 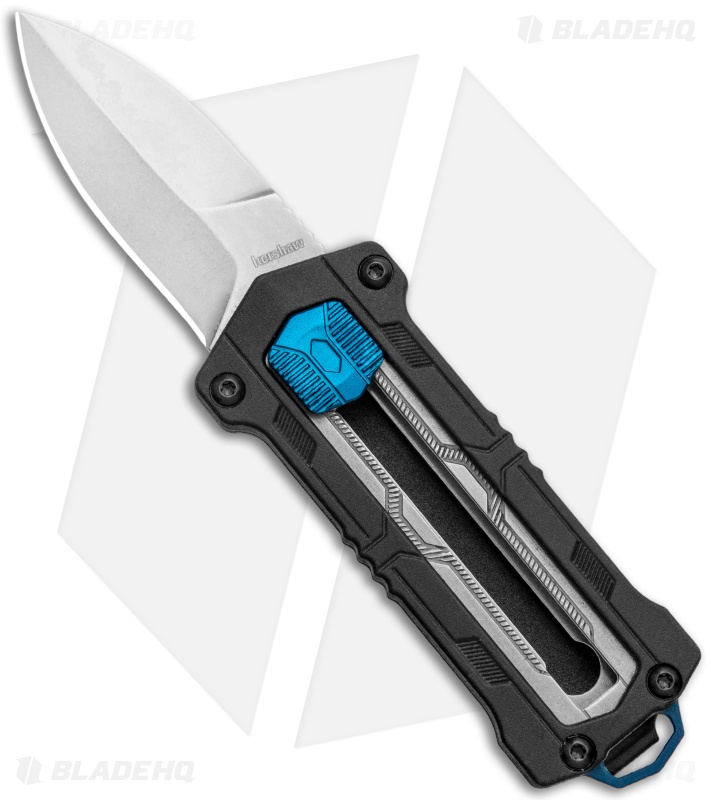 It is not so easy to find automatic knives with blades under 2 inches, but the HK Micro Incursion OTF Automatic Knife is one such knife. What’s most valuable about this knife are its 1.95-inch blade and double action opening and retraction, making it one of the select few automatic knives legal in California. Ideally, we would’ve found a knife with a blade shorter than 1.5 inches for you Massachusetts and Connecticut folks, but no such luck. 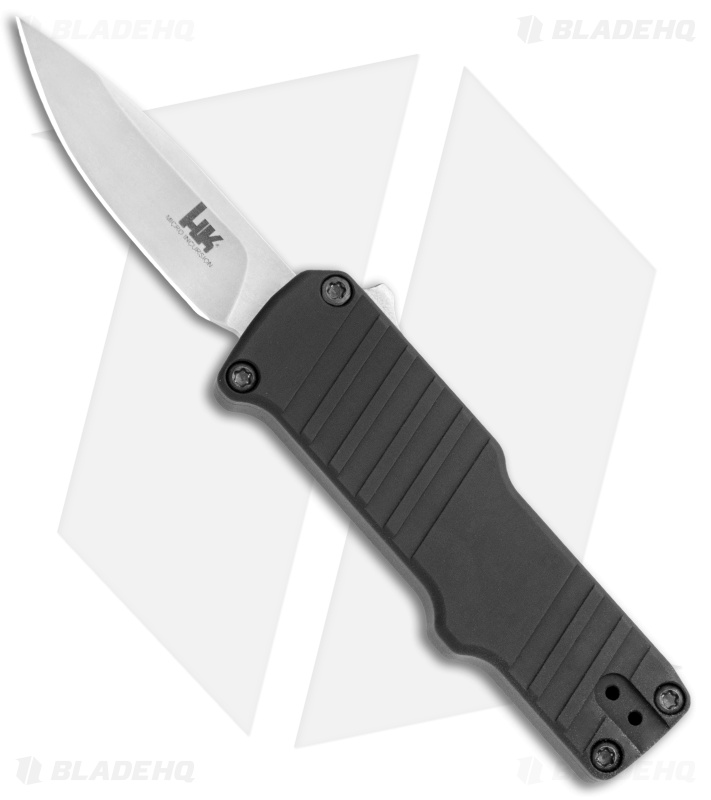 While bigger knives are great, they can be a pain to carry around, not to mention difficult to wear discreetly. The Boker Plus USB OTF Automatic Knife is neither of those things. With a total length of 4.75 inches and a 1.75-inch blade, you would have no trouble tucking this into a pocket or boot or hanging it around your neck with the built-in lanyard hole. (Boker called it the USB knife because it could seriously be mistaken for a USB drive with its compact size and smooth black aluminum handle.)

For the best OTF knife for discreet self-defense, you can’t do better than a double action knife like the Boker Plus USB knife. 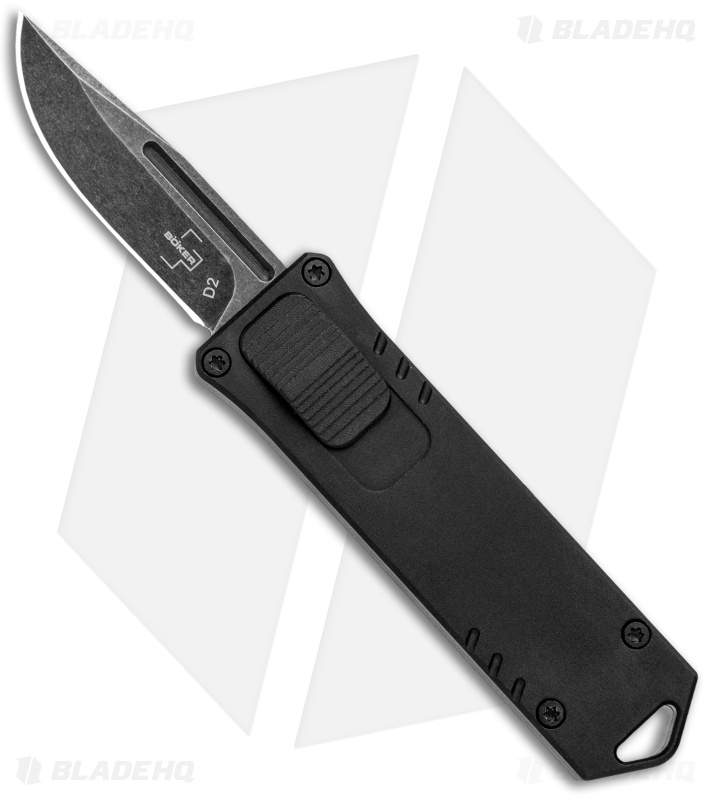 THE BEST OF THE BEST

For a truly outstanding double action automatic knife for serious self-defense, the Guardian Tactical Recon Elite OTF Auto Knife will be the best OTF knife. This knife is not messing around. With a 4-inch tanto blade, a serrated edge, advanced double action mechanisms and anodized aluminum handle, this knife is a popular choice for active military personnel. The blade is also made from Elmax, a high-chromium steel that offers top-of-the-line corrosion resistance, edge retention and sharpening capability. If you want the best OTF knife for life, this Guardian Tactical knife is up to the task. 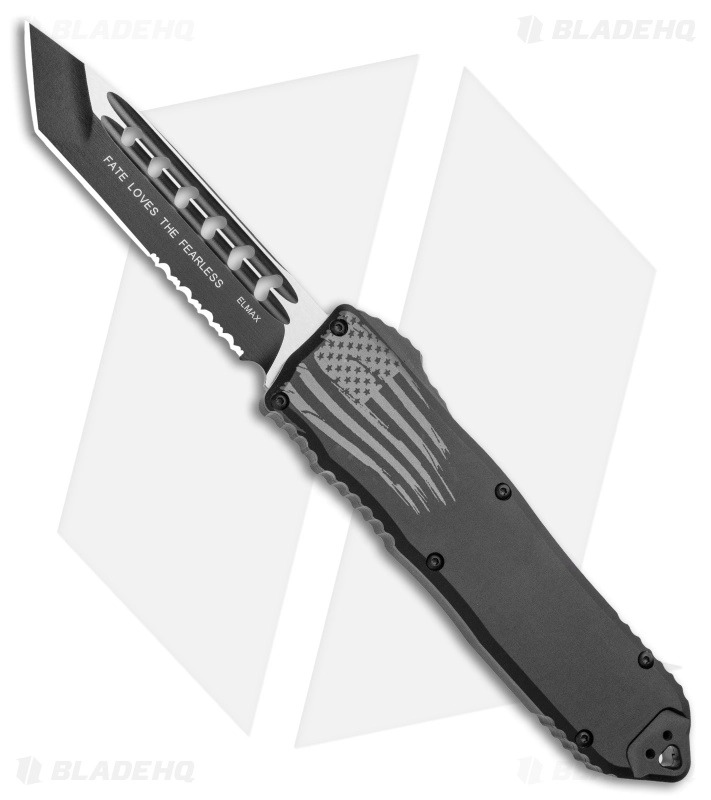 If You Do Bring a Knife to a Gun Fight, Make It One of These Throwing Knives