It’s a sure sign golf is growing in popularity when major sportswear and shoe manufacturers jump into the market for the first time in a major way. Golf became a popular escape during the pandemic thanks to its innate ingredients of outdoor exercise, wide-open spaces and small group play. Amidst widespread social distancing rules, golf really was the perfect game. While other activities became temporarily impossible amidst quarantines, the game of birdies and bogies boomed in 2020 — inviting smart companies to jump into the golf world for the first time.

Enter Cole Haan Golf and its new line of performance golf shoes. Premiering in April 2021, the footwear company’s designers took on the challenge of updating classic athletic shoe styles with looks sure to impress younger players. Ranging in price from $140 to $170, Cole Haan golf footwear combines modern materials and just enough flare to allow a bit of peacocking on the greens.

Plus, as you’d expect from Cole Haan, they look unlike any golf shoes we’ve seen before: 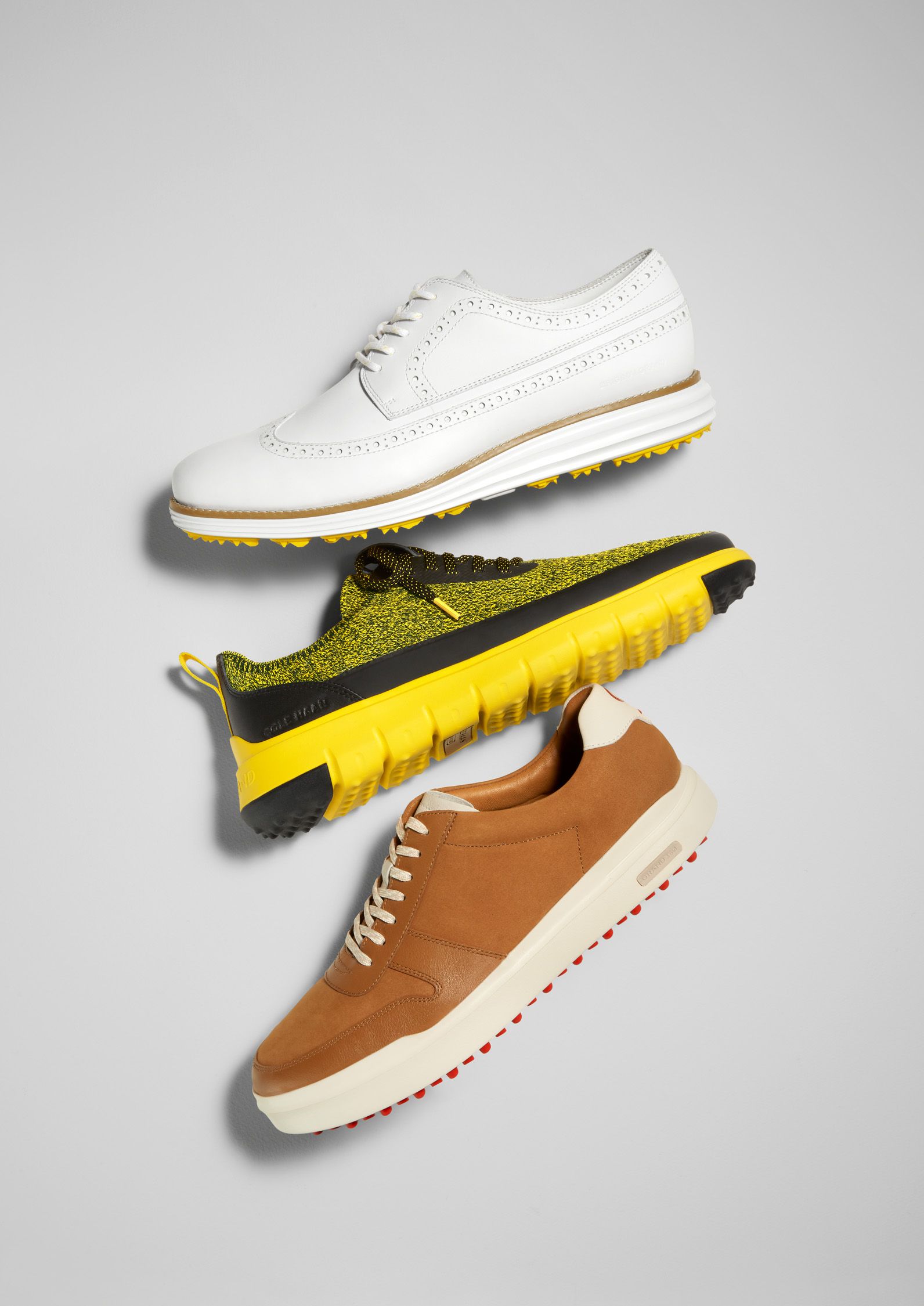 The Cole Haan golf shoes arrive in three categories: The ØriginalGrand Golf Shoe (an updated nod to classic golf shoes the game’s history), the GrandPrø AM Golf Sneaker (a more casual look designed to work well on and off the course), and the Generation ZERØGRAND Golf Sneaker (the most modern and aggressive choice). Both the casual beginner and the more experienced, traditional player will find a pair that fits any game and any personal style.

Cole Haan’s new golf footwear line officially launched on April 1, 2021 and is available in men’s and women’s sizes. You can find these shoes for sale at the official Cole Haan store, Zappos and Amazon. Keep reading for more photos, details and our full review of these new golf shoes.

First up, the Cole Haan OriginalGrand Golf Shoes, a mix between traditional sneakers, golf shoes and wingtip dress shoes. These shoes are available in four colorways including two stylish camo prints. They’re designed to keep your feet dry even in wet weather and feature a leather upper and cushioned foam footbed. While they might look like stiff dress shoes, they’re designed to flex and move with your feet. 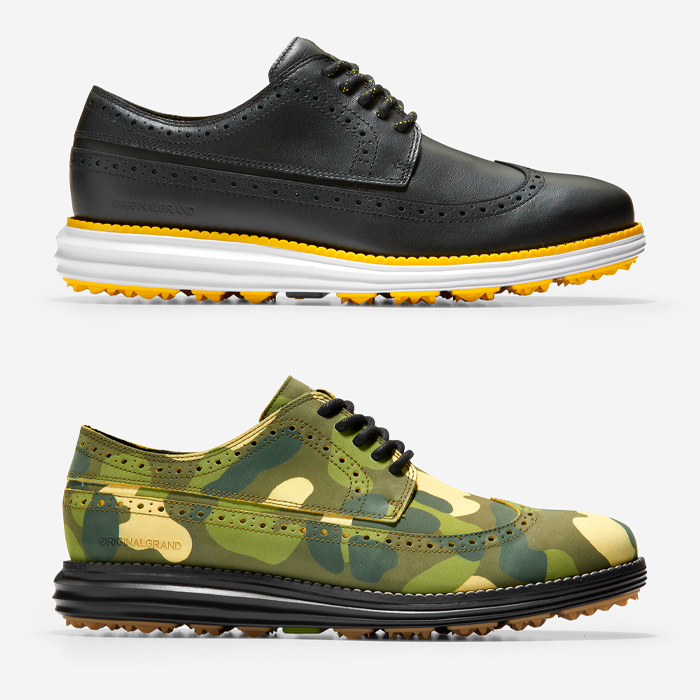 The more laid-back GrandPro AM sneakers also feature water-resistant leather. They’re available in three colorways and are a touch cheaper than the OriginalGrande series. 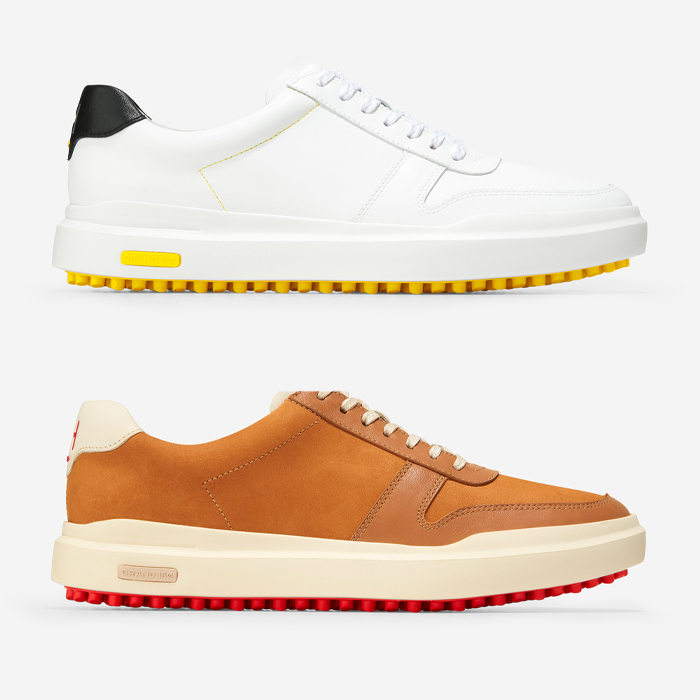 For players who prefer a much more casual look, we’d recommend Generation ZEROGRAND. These sneaker-style men’s golf shoes are the most lightweight of the three and won’t look out of place when you leave the golf course. 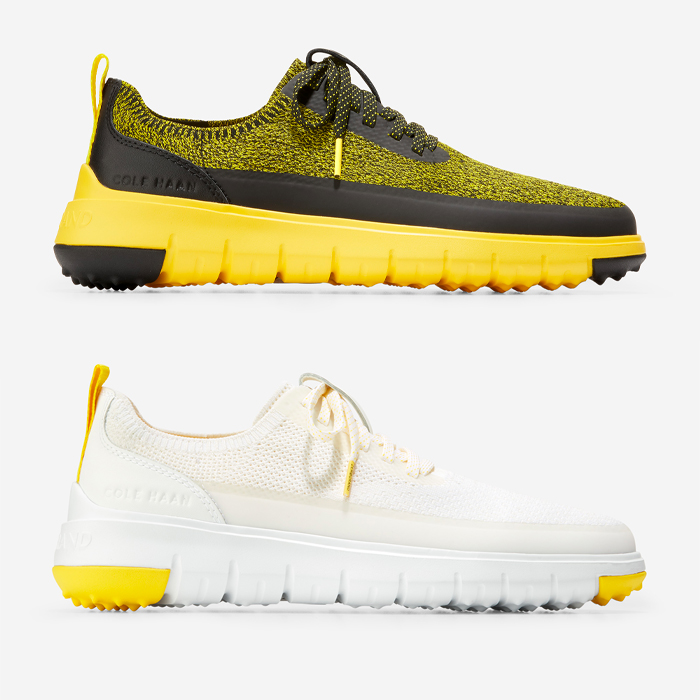 What We Liked about the Cole Haan Golf Shoes

Cole Haan sent this golf scribe a pair of the ØriginalGrand Golf Shoes for testing. The shoes take a familiar wingtip and update it with high-tech materials and 21st-century styling notes. Still, it doesn’t matter how a golf shoe looks if it doesn’t fit comfortably and wear well in play. I’ve tried on many golf shoes, and it’s a strange phenomenon that the more expensive and well-made tend to be the most uncomfortable when first worn. It takes at least one round of potentially painful 18 holes to break in those kind of shoes for future use.

These new Cole Haan golf shoes are comfortable immediately out of the box and arrive ready for immediate use. No breaking in required. I was at the range and playing nine with the ØriginalGrand Golf Shoe the same day they arrived. If you prefer spikeless golf shoes that are both practical and stylish, then this is a more than worthy option to consider.

While Cole Haan shoes are known more for their forward-thinking fashion and comfort, athletic footwear shoppers might not consider them overly rugged or tough in the elements. The ØriginalGrand Golf Shoe arrives completely waterproofed, making them tough enough for early season play in cold weather climates or anywhere the rain potential is high on the links. Combine that water protection with the out-of-the-box comfort, and the ØriginalGrand Golf Shoe warrants the $170 price tag.

So far, I’ve only been able to test the ØriginalGrand Golf Shoes, but all three shoes in the new Cole Haan Golf line offer water-resistance materials for rainy weather. 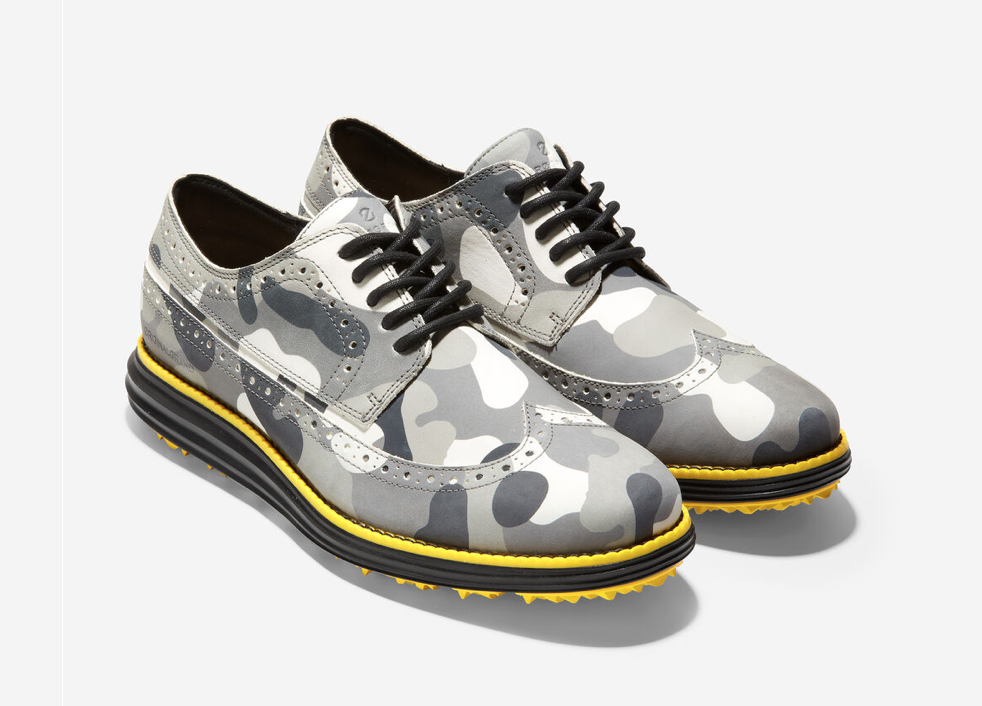 What We Didn’t Like about the Cole Haan Golf Shoes

The product line just arrived in April 2021, so it’s early days yet in the Cole Haan Golf Shoe world. This first set of releases all includes some form of solid, pre-set traction sole — essentially sneakers designed for play on grass. Serious players could come looking for a replaceable spike model, preferably with a seven spike layout. Even so, spiked golf shoes give Cole Haan designers something to try in the future.

The Verdict: Welcome to the game, Cole Haan!

It’s clear Cole Haan aimed their new golf shoes at younger players — giving them a more fashion-forward option if they want to gear up properly to take up the game. Still, since golf shoes are athletic footwear built to perform in very specific ways, fashion takes a back seat to function when you take these to your local course. In action, the ØriginalGrand Golf Shoe showed off advanced materials and solid build quality, earning passing grades in their big debut. 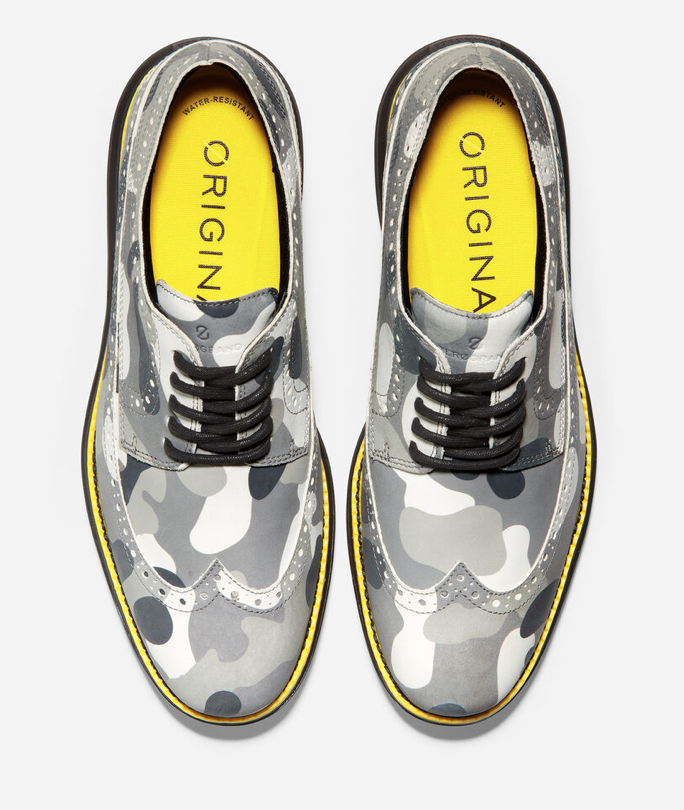