Nonetheless, these cameras are a blast — especially in the summer. If you or your friends are into shooting disposable film for the mems, this is a fear-free way to continuously shoot all year long. From winter sledding to summer sprinkler fun to tubing down lazy rivers, the waterproof disposable camera will snap film-centric memories under any circumstances. This is something you can’t even do with most smartphones, film cameras or even your best DSLR camera.

You want to create memories this summer, don’t you? Good, then you’re going to need a couple of waterproof disposable cameras to get you through all of your upcoming adventures. Here are the five best options you need to consider now.

If you’re looking for a reliable waterproof disposable camera to carry in your back pocket this season, the Fujifilm Quick Snap has you covered. Fujifilm is known for doing disposable cameras the best these days and given almost 1,000 five-star ratings on Amazon, this camera shouldn’t disappoint. It uses 800-speed film so you can shoot in most lighting situations and the camera can be submerged in up to 35-feet of water. It’s incredibly simple and straightforward, so don’t expect the highest quality of photos in the world, but we’re sure you’ll get some killer shots anyway. 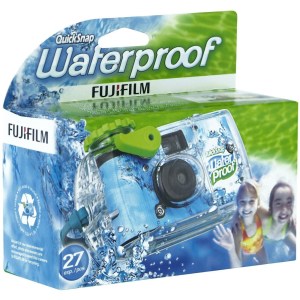 Kodak is right on the tail-end of Fujifilm’s quality in terms of waterproof disposable cameras. Like the Fujifilm, this one is as high-quality as it’s going to get. It can shoot in up to 50-feet of submerged water and has 27 exposures to shoot with. It’s completely easy to operate, so much so that a 5-year-old can effortlessly figure it out. Take it on your next rafting adventure, to the water park with your kids or even just a simple backyard pool day. 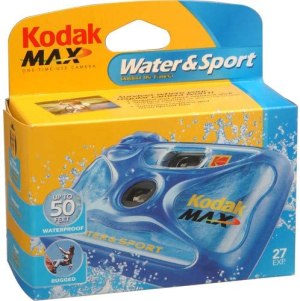 White-water rafting? Canoeing? Swimming laps? Running around in the sprinklers? Whatever the case may be, the Kodak Sport 8004707 is perfect for all water sport-like activities. It’s built with an extra-durable body so if it’s dropped, your flicks will be a hell of a lot safer than any other waterproof disposable camera alternative. It can be submerged in up to 50-feet of water and even has a sunscreen and scratch-resistant lens. If you’re letting your toddler test out their photographer skills this season, this one’s probably your best bet. 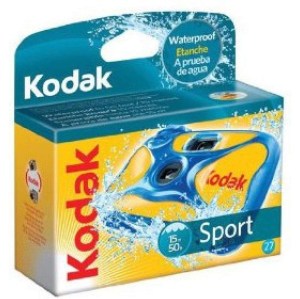 This two-pack by SnapShotz is a great way to capture memories all summer long. Each camera comes with 27 exposures and is equipped with 400-speed film. They’re pretty inexpensive in terms of our other options, so we suggest that the next time you have a graduation or pool party, buy a bunch and pass ’em around to friends and family to use throughout the day. In the end, you’ll have a ton of awesome pictures to provide memories that will last a lifetime. 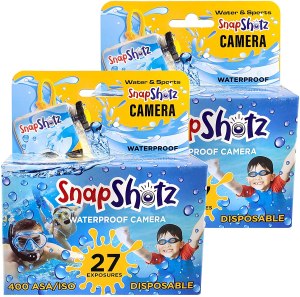 The One Shot is exactly what it says it is: fun and waterproof. Truthfully, there is nothing so different about it compared to our other picks. It can be submerged in up to 32-feet of water, it has 27 exposures and it’s built with 400-speed film inside. Just like the others, it has no flash so it can only be used in daylight. It has a strap attached for easy holding, too. 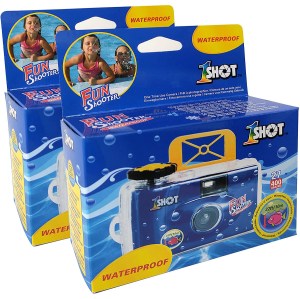