The iconic 90s series, Baywatch, is being adapted into a new movie directed by Seth Gordon, hitting theaters on May 26. Loosely based on the original show, the new film will star Zac Efron, Dwayne Johnson and model Kelly Rohrbach, among others. Baywatch originally debuted in 1989 on NBC, chronicling the lives of a group of exceptionally attractive Los Angeles lifeguards and their interpersonal relationships. A couple of the show’s original stars, Pamela Anderson and David Hasselhoff will also make an appearance in the new film.

While the new movie will maintain the original steamy plot, dramatic story lines and notorious slow-motion running scenes, Johnson (cast as Mitch Buchannon) told Variety that there will be a few marked differences in the upcoming movie. First, the new film will be more comedy-centered compared to the show’s dramatic, soap-opera worthy tone. Secondly, he notes that the upcoming movie will be much more raunchy and has upped the anty on the “flesh factor,” exposing even more skin than before — as if that were possible. He says, “I think people are going to be shocked that Baywatch has got dirty, but there are a lot of laughs.” 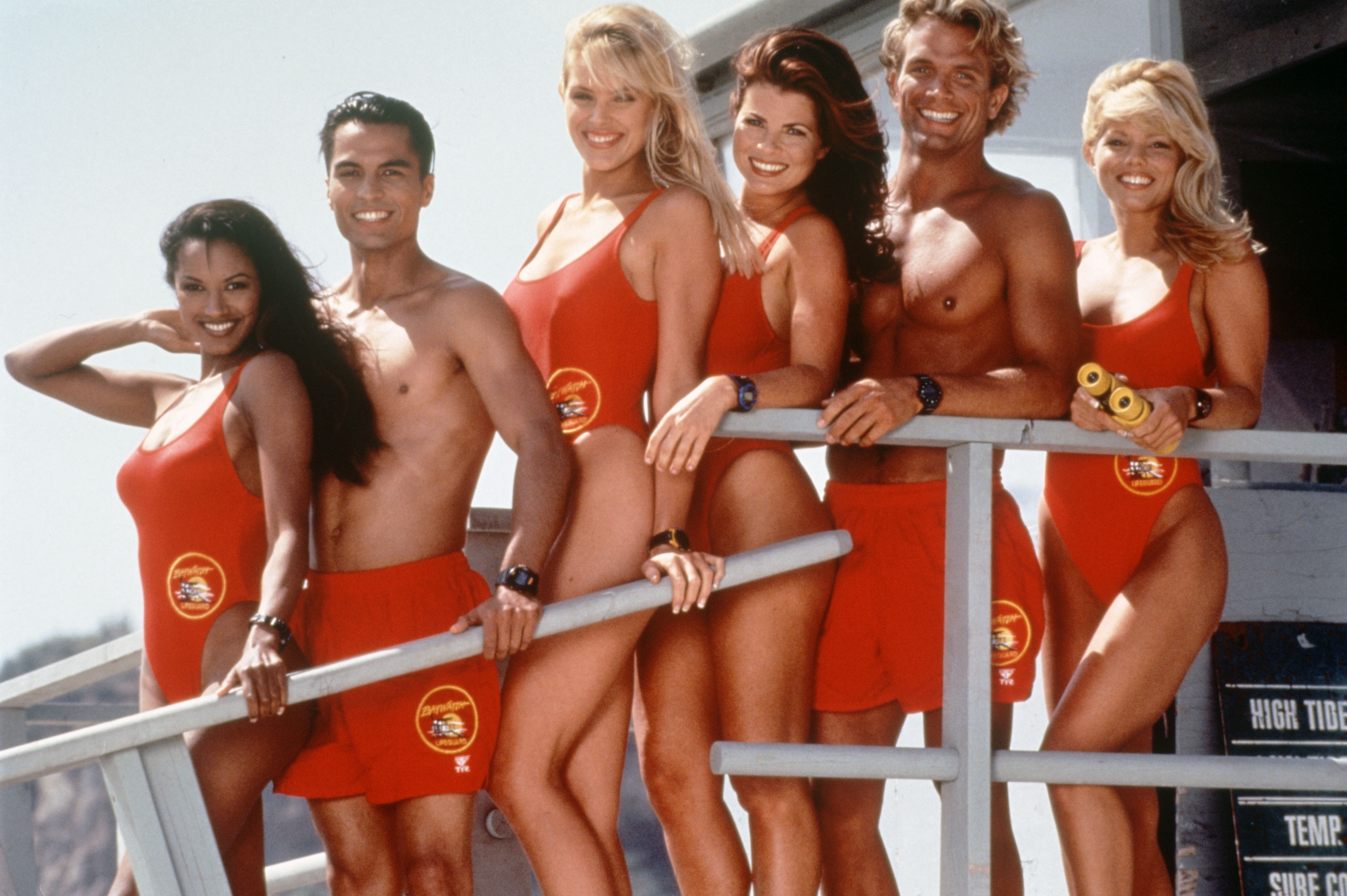 Not only are the classic characters being resurrected with the new film, but the iconic swimwear from the show is also coming full circle again in fashion swimwear this summer. The iconic cherry red one-piece famously sported on buxom blondes C.J. Parker (Pamela Anderson) and Lani McKenzie (Carmen Electra) have become a symbol of American sex appeal and California beach culture.

Even if you don’t have the same body as the show’s bombshell cast, this style of bathing suit is surprisingly wearable, creating the ideal balance of sexiness with athleticism. But the female characters weren’t the only ones turning heads in the show — Baywatch didn’t skimp on brawn or bronze in the casting of male characters either. The show’s most celebrated heartthrobs were repeatedly depicted pridefully putting their six-pack abs on display wearing low rise swim trunks practically melting off their bodies in each rescue scene. Kick off summer this year with one of these 90s throwback pieces.

This playful suit not only mimics the original cut and fit of the famous Baywatch one-piece, but it also references it with its cheeky verbiage “bae watch.” Nicknamed “Babe Watch” during the show’s active years, the show was just as much known for its beauty and brawn as it was for its slow-motion running scenes and dramatic interpersonal plots. This suit modernizes the original with colloquial wording for a truly contemporary take on the classic suit. 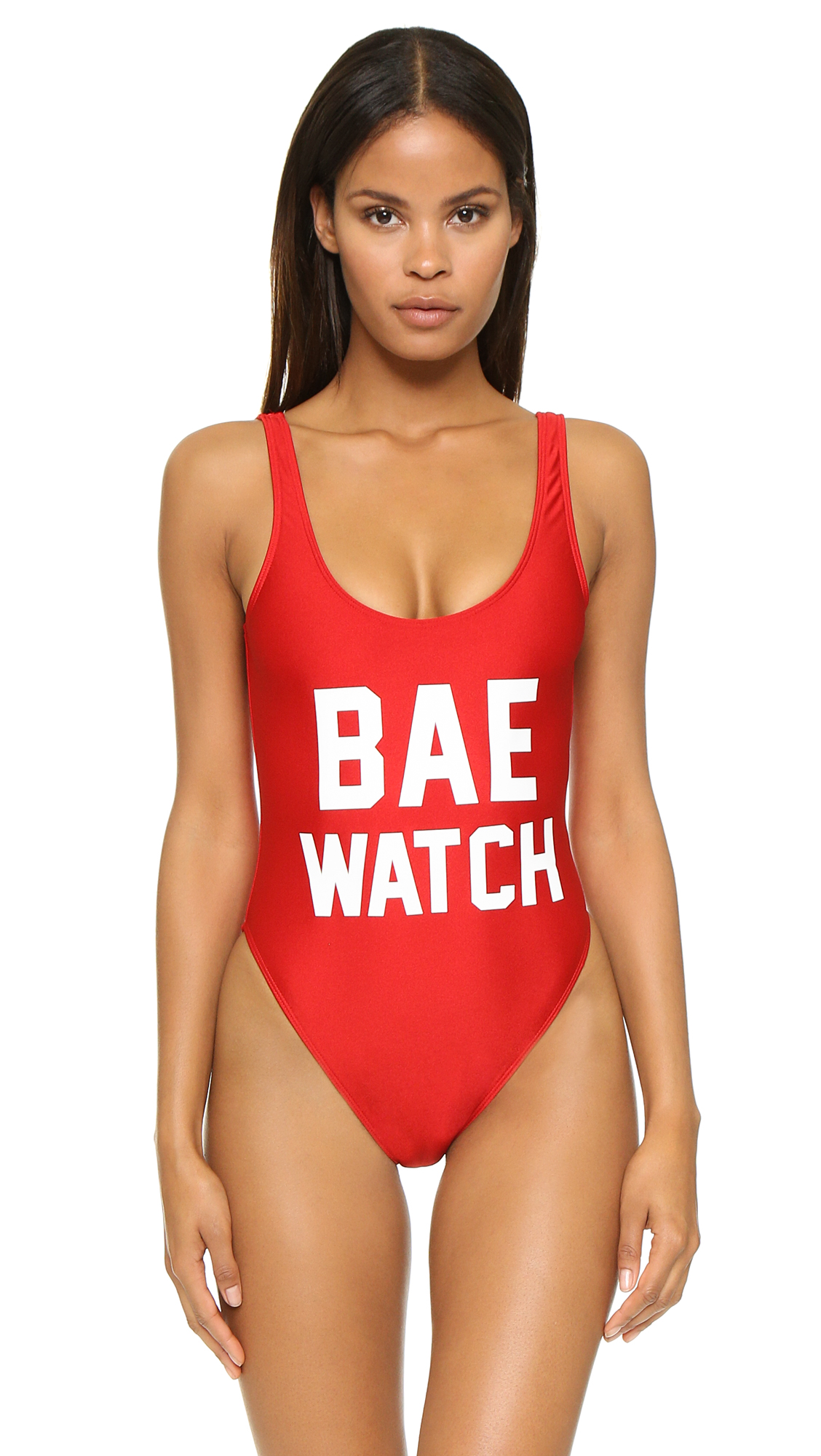 These red swim trunks get the Baywatch look spot on, but they also offer enhanced performance features, allowing you to move freely and comfortably whether you’re surfing, playing volleyball, running along the beach, or making a rescue. Since the 90s came to a close, men’s swim trunks have become increasingly longer, but super-hunks like Matt Brody (who will be played by Efron in the movie) sported much shorter hems and lower rises on the show, quite possibly adding to their heartthrob allure. A shorter hemline not only allows for an increased range of motion when playing sports or swimming, but also offers a more flattering, lengthening effect to the legs, which results in appearing taller and leaner.

For those who prefer a trendier take on the look, this swimsuit keeps the sporty cut of the original but refreshes it with contemporary details, adding in current swimwear trends including the peek-a-boo cut-out side straps and high neckline. This swimsuit is a great option for those who aren’t comfortable with the above-the-hipbone cut. It still features a slightly rise but isn’t exaggerated. This adds a bit more coverage in the midsection and decolletage but shows off the sides and back.

When sunset approaches the coastline, lightweight protection is often needed to stay warm from the ocean’s cool breeze. Buchannon was often seen sporting his jacket unzipped, revealing his chizzled chest. Whether on the beach or out on the streets, this windbreaker is a great piece for warmer weather.  This one will give you a little bit of warmth for summer nights and protect you from brash winds without being heavy and overly thick. The classic red color looks quintessentially American, playfully nodding to the Baywatch aesthetic, without making an obvious statement.

This retro-inspired swimsuit features the same bright “lipstick red” color as the original, plus it has a high-cut, high-rise backside, and semi-square neckline. If you’re looking to get a close dupe of the original style, this one is for you. If features all of the same attributes as the original but softens them for a more wearable and modern version. Plus, if you’re not a fan of cheeky bottoms, this one gives medium to full coverage to your bum. This is a versatile suit that will flatter a variety of body types and offers support and coverage with a built-in shelf bra. Plus, the warm-toned red hue will accentuate a number of different skin tones, whether you’re fair or deep tan.