* The model and influencer is also the face of Bulgari’s accessory line
* Hadid took to social media to promote the announcement
* Today, she is attending press events in Rome, Italy for the perfume’s presentation

Bella Hadid has been named the face of Bulgari’s new fragrance, Goldea Roman Night. This news comes just months after Bulgari selected the model and social media influencer as the ambassador to their accessories line back in February. The new fragrance was presented at an event in Rome, Italy on Wednesday morning. 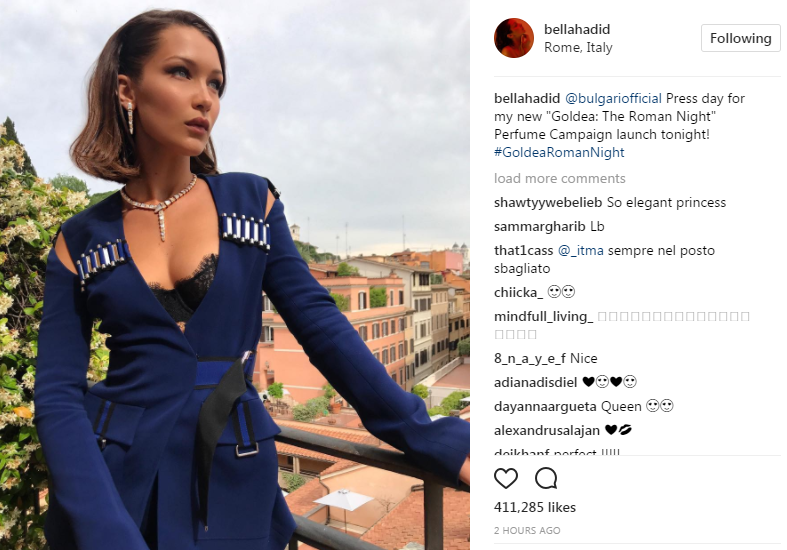 The Goldea Roman Night campaign was also shot in Rome, photographed by Glen Luchford. Bulgari posted a series of teasers on their official Instagram account featuring images of Bella from the campaign with her back to the camera, leading up to today’s announcement that she is indeed the mysterious woman in the images. Bella also took to her Instagram account to announce the big reveal to her 13.1 million followers Wednesday morning.

Who could she be? On May 24th, we’ll be revealing the official ambassador for our newest fragrance Goldea The Roman Night. Join us at 8:30, at the Spanish Steps in Rome or follow live on our Instagram stories. #GoldeaRomanNight

While the fragrance doesn’t hit beauty shelves until this September, Hadid spoke with Refinery 29 about the scent. “It’s very masculine, but also feminine so it kind of reminds me of my dad’s cologne and my mother’s very feminine perfume put together,” she says. “It’s a very sexy perfume.”