In case you haven’t noticed, band shirts have expanded beyond the merch table to become bona fide fashion items. Right now, vintage t-shirts are really trendy (or, at least, t-shirts that look vintage), and band t-shirts are a big part of that craze. On top of that, fashion and streetwear labels regularly collaborate with contemporary bands to make t-shirts that are much more than just the album cover slapped on a blank white tee. (Case in point: see the recent Billie Eilish x Murakami collaboration at Uniqlo.) Of course, being an actual fan of the band you’re repping is always a good idea, but you also want the shirt to look cool, too.

A band tee is also a great conversation starter — seeing someone repping your favorite band makes it easy to establish a connection based on a shared interest. Just remember not to go around grilling people on whether or not they actually like the band. Asking women to name songs from the band on their tee is so widespread that there’s even a podcast called Name 3 Songs that critique sexism in the music industry. So the next time you see someone wearing a t-shirt of a band you like, maybe try, “Hey, cool shirt,” instead of an impromptu game of 20 questions.

When shopping for the best band tees, there are a handful of classics that are pretty ubiquitous — there’s your Joy Division, your Zeppelin, your Nirvana. And we can’t forget the iconic Misfits fiend t-shirt. These bands are all great, and there’s a reason their t-shirts have stuck around for so long. But we decided to seek out some unique and stylish options that go beyond the basics.

Here at SPY, we take the best men’s t-shirts seriously. Extremely seriously. To help you in your search for the best band t-shirts, we’ve collected some of our favorite officially licensed band, album and music tees to buy online today.

Joy Division shirts are very common, but tees from New Order — the band formed from members of Joy Division — are much less common. It’s unfortunate, considering how many incredible albums (with cool covers) New Order has released over the years. Technique is not as well known as Power, Corruption & Lies, but it’s a classic in New Order’s catalog. 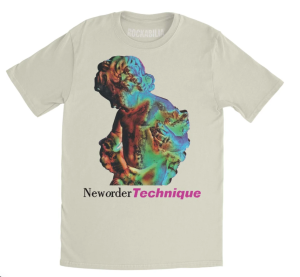 George Clinton’s groups Parliament and Funkadelic are known for their eye-catching outfits and wild performances. So it suits the band’s image to swap out the standard black or white tee for this vibrant pink color, which Urban Outfitters calls “coral.” It features the image from their iconic Maggot Brain album cover with Funkadelic’s name in bright green. The back of the shirt says “Free Your Mind and Your Ass Will Follow!” Maybe don’t wear it to meet the in-laws (unless the in-laws are really cool). 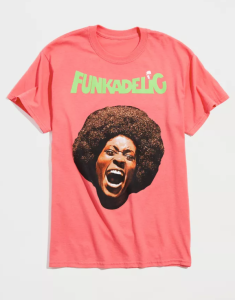 This t-shirt from Urban Outfitters takes the idea of a “Heart of Glass” pretty literally, framing lead singer Debbie Harry in a heart of glass. Of course, the song’s lyrics are actually about a lover’s fragility and fickleness, but our love of Blondie is anything but. 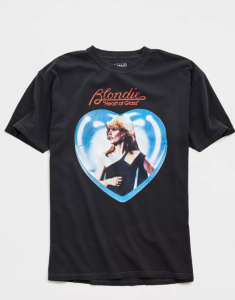 Aaliyah’s music has been hard to come by in digital formats for a long time, but more of her music is arriving on streaming platforms. That means more fans will be able to discover her immense talent. This shirt features a 90’s-inspired graphic on a faded black background. 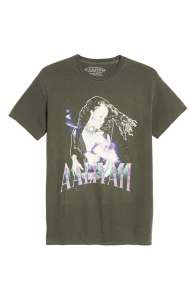 Nas has never shied away from making a statement, and releasing a hip hop album titled Hip Hop Is Dead is nothing if not a statement. This t-shirt borrows the design of the album, featuring Nas kneeling over hip hop’s grave and throwing a rose in. 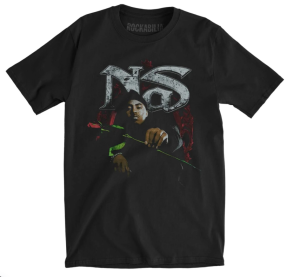 He may have sung “Eyes Without A Face,” but Billy Idol’s trademark is his face — namely, his distinctive smirk, as well as his aggressively styled bleach blonde hair. This tee captures that look perfectly, adding some 80’s-inspired flair in the form of pink stripes and cursive lettering. 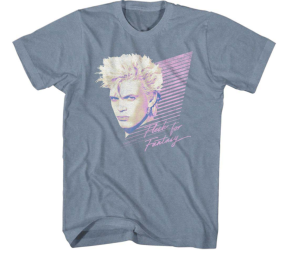 Rolling Stones tees are popular, but there’d be no Stones without Muddy Waters. That’s because Muddy Waters’ song “Rollin Stone” served as the inspiration for the English rock band’s name. This tee has a vintage-inspired design with Muddy Waters’ name above his likeness and the words “Father of Chicago Blues” below. 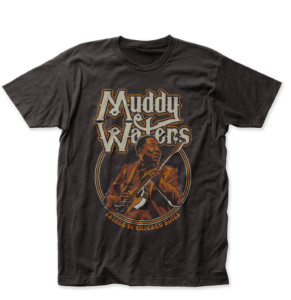 “All I’m asking for is a little respect.” It’s a refrain that’s become an empowering anthem for feminism and civil rights, but it wasn’t always that. Franklin made subtle but powerful tweaks to the original song, which was first written and performed by Otis Redding and was originally about a relationship. This shirt certainly pays its respect to Aretha, with the words “The Queen of Soul” under her framed likeness. A cursive font near her face reads “Respect.” 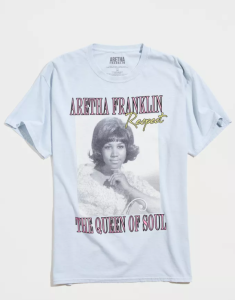 DMX’s untimely passing prompted a reevaluation of his impact on the music world. He was famous for his gruff voice and visceral lyrics, but DMX was never just one thing — he once even recorded a cover of “Rudolph The Red Nose Reindeer.” He changed none of the lyrics and it somehow still sounded like the hardest song you’ve ever heard. This tee features oversized lettering and an image of the rapper in front of a chain-link fence. 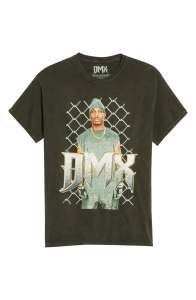 Buy Now
These Rock Records Deserve a Spot on Your Shelf