Over the last few years, Chelsea boots have risen significantly in popularity in the men’s shoe department—and for good reason. The extremely versatile men’s boot just looks good on its own and pairs well with nearly every single outfit you can imagine. Whether you’re rocking a cozy sweater and jeans look for fall or need a semi-formal shoe to rock at a work function — the Chelsea boot is there for you. Plus, they tend to be built durably and can handle the elements throughout fall and winter, so your feet will stay warm, dry and stylish at the same time.

After the creation of the Chelsea boot in 1851, it went on to be considered the British equivalent of a cowboy boot, and then gained a second life thanks to a little indie rock band called the Beatles.

The boots are still the same now as they were then: made of lighter materials, an elastic center, and a pull tab that makes it so the boots slip on and off with ease. Whether it’s full suede, leather, or rubber, we’ve rounded up 17 of our favorite Chelsea boots on the market. Whether you’re a leather fanatic, a classic dresser or someone who loves to make a statement — there’s a Chelsea boot in this list that will fit your fancy.

Thursday Boot Company is one of those direct-to-consumer brands that’s gained considerable popularity in recent years — but don’t let fancy Instagram ads get to you, as they’re capable of making extremely quality products. Their take on a Chelsea-style boot, known as the Duke, is our pick for the best Chelsea boot around. The moldable footbed contours to your foot over time, the suede itself is water-resistant (should you get caught in the rain) and the footbed has plenty of good traction to it. While we like the versatility of the Dark Olive suede, there are plenty of other colors if you want to change it up — just know this is the boot you should consider first when thinking about getting a Chelsea boot. 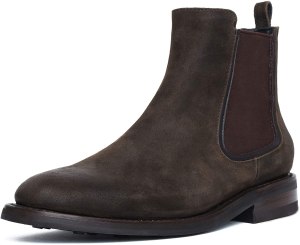 A lot of Chelsea boots on this list are suede options, but one of the most luxurious options is this Clarkdale option from Clarks. The rich, coffee-colored suede is a great companion to both lighter and darker outfit hues. The full-grain leather sock liner provides both comfort as well as a smart look. Additionally, the rubber sole gives all-day cushion so you can go straight from the office to date night with ease. And if you’re the kind of person that needs to slot in your own inserts, you can do that with these. 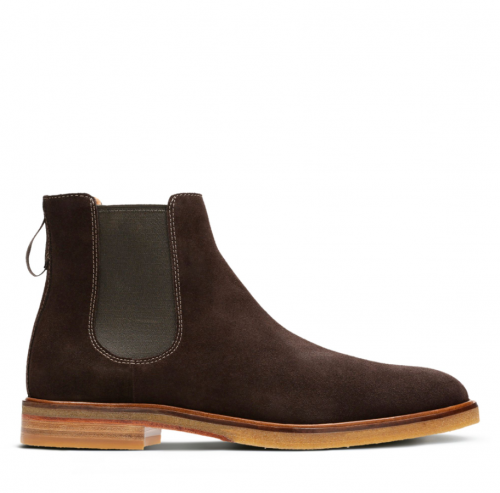 Another great R.M. Williams option, this leather Craftsman boot is made by some of the best Australia has to offer, and it shows. The company’s head of production, Mr. Michael Williams, has been with the company since he was an apprentice 40 years ago, and says these boots are his favorite. The block heels give a little lift and, according to Williams, once “you break in a ‘Craftsman’ and the leather then starts forming to your foot, I find them so comfortable.” Take it from him folks, and grab yourself a pair. If you want leather, there’s no better pair. 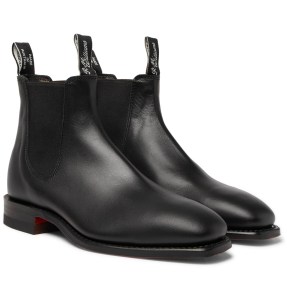 Decidedly workwear in their look and structure, Blundstones are a rough and tough pair of boots. Expertly made to look to look as utilitarian as possible, Blundstones are chunky — but in a stylish way. Originating from Australia, they’re seemingly a distant cousin of something like Red Wings or other similar heritage boots. The smokey black color is also a nice change of pace from your typical black leather boot. 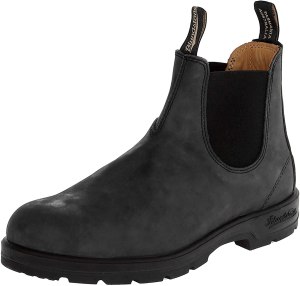 Bring some yeehaw energy to your outfits with the Frye Grady Chelsea boot, which is the perfect marriage of Chelsea and cowboy. It has an elasticated panel with leather stitching to keep the elastic from stretching out. The tall Cuban heel, pointed toe and decorative toe medallion add cowboy boot flair while keeping these shoes city-ready. 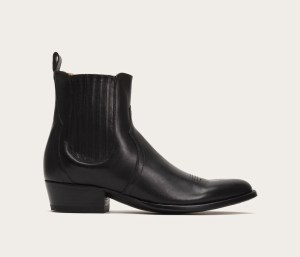 We LOVE these boots, and we featured them prominently in The 2020 Man, our guide to the best men’s products of 2020. The only reason they’re not created more highly here? They’ve been out for quite a while now, but we still love them.

There’s something about matte that’s just so… sophisticated and classy. While getting matte paint on your car seems a bit ridiculous, these black matte Chelsea boots definitely don’t. The black matte surface on the outside comes from their Rugged and Resilient leather that has a Goodyear Welt Construction for durability. These boots also have cork-bed midsoles that form to your feet the more you wear them for comfort. They’re handcrafted and built for men who wear their boots out until they’re on their last leg, so there’s no need to treat them gently. 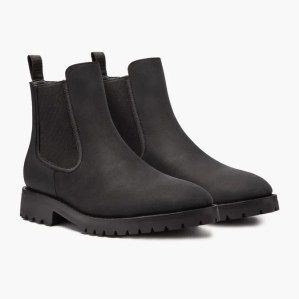 If you love the style and shape of a Chelsea boot but want something that you can wear in the rain without having to worry about ruining it, Hunter’s “Original” Chelsea boot can withstand all kinds of nasty weather. With a strong rubber sole that provides plenty of traction and grip, you won’t slip and slide while walking along. While it’s great to wear as a commuting shoe on those days in which there’s a torrential downpour, they work just as well in the sun for those looking to play with textures in their outfit. 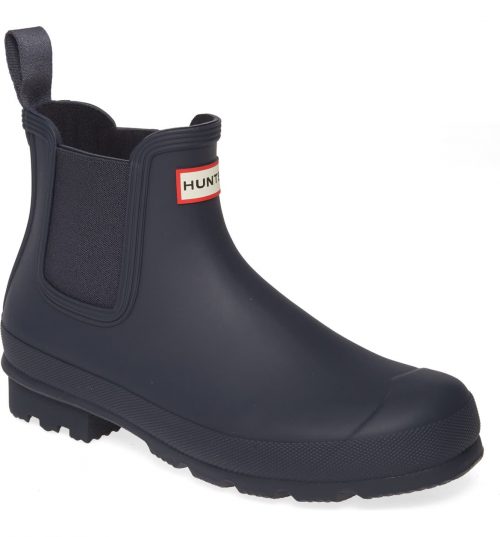 Allen Edmonds is an iconic American dress shoe maker, so it’s no surprise that they offer a dressy take on the Chelsea boot. With a low heel and rounded toe, this boot is perfect for wearing with a suit to a wedding, but it works just as well with a pair of cuffed blue jeans. It comes in black and brown, although stock is more limited in brown. 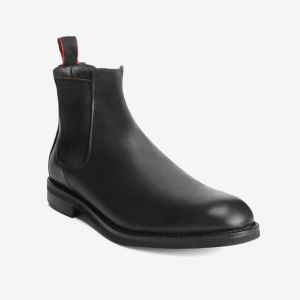 Relevant now just as much now as they were back in the 1980s, the Doc Martens silhouette has been a classic style shoe that’s just as beloved by punks as it is by fashionistas. The rugged, rubber sole is instantly recognizable, giving a slight military-inspired vibe to whatever other clothing you pair alongside them. Plus, as a Chelsea-style boot, they’re easy to take on and off and durable enough to wear time and time and time again. 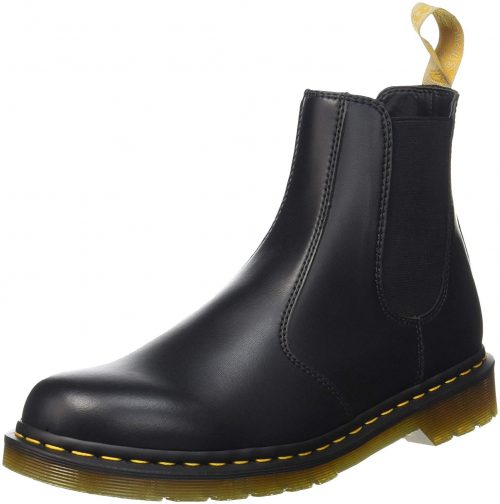 An elastic panel is typical with Chelsea boots, but it’s not the only option. These boots from To Boot New York feature a zipper on the inside ankle, making these boots easy to step into and take off. The boots are made from Italian calf leather and come in black or brown. 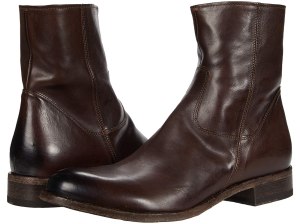 Yes, these do look a lot like the more expensive Common Projects boots, but knockoffs these are not. New Republic was launched by Mark McNairy, a menswear veteran whose runway models have included Nick Wooster, Travis Scott and Pusha T. New Republic is his affordable, direct-to-consumer line, and these suede boots are made with genuine leather and natural crepe soles that are comfortable enough for long walks. 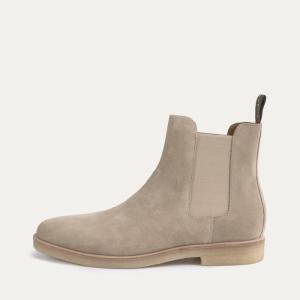 These aren’t your granddad’s Chelsea boots. The upper of these boots feature a wide rounded toe and an elastic gusset at the ankle. But the sole is where it really gets interesting. The chunky purple soles creep up the upper, almost as if you stepped in purple paint. Bottega also makes a green version of this shoe. 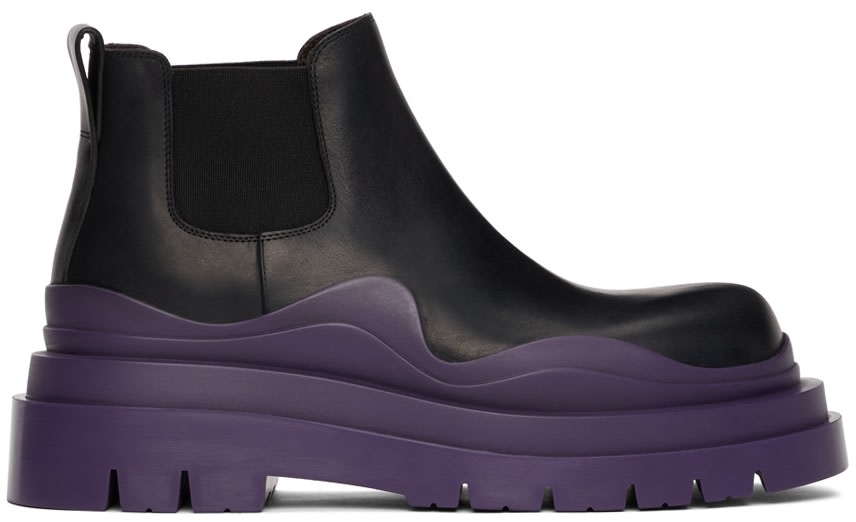 You don’t need to drop a significant amount of cash to get a high-quality, attractive pair of Chelsea boots. Aldo makes excellent affordable options that retain all of the simple, minimalist ankle boot features you want from this specific style. These Relari boots feature a suede exterior, a round toe and a rubber sole that’ll last you through the seasons with proper care. These boots are easy to wear with any outfit and simple in their design, a major plus. The navy color is a bright, fun move if you’re looking to spice things up — but they also come in black and beige if you want something a bit more classic. 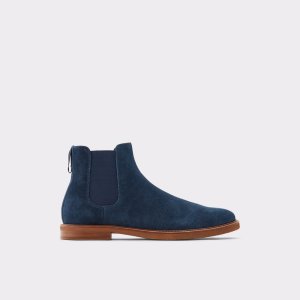 These unique Chelsea boots have been refined by George Cleverley’s English workshop and its craftsmen for years. The buckle in the front is a nice touch over the beautiful brown suede color, and the boot has leather linings inside that will mold to the unique shape of your foot. The soles are also tipped with rubber for stability. The makers also recommend investing in a special brush that removes dirt, scuffs and other marks after each use. 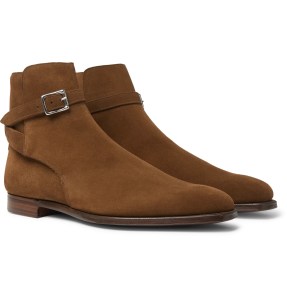 15. Taft The Dylan Boot in Woven

This woven Chelsea boot is one of the most unique designs we’ve seen. The beautiful exterior will stand out without making an outlandish footwear statement, and the ankle strap and buckle across the top adds an additional style element to the look. The Jodhpur boot has a sleek silhouette that’s hand-woven in Spain and Burnished with stain and a heating element for a stunning color and finish. The weave is Blake-stitched on top of the leather sole for a durable, comfortable and sleek look that will last you for years. It’ll go great with darker jeans or even khaki pants in warmer weather. 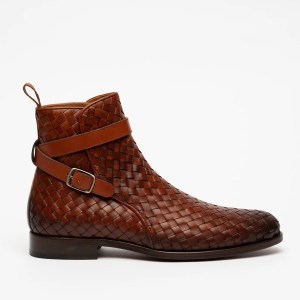 Taft The Dylan Boot in Woven

Common Projects has built a name for themselves around making the best versions of men’s basics. What the shoe lacks in any sort of overt or flashy design features, it makes up for in superior quality and construction (they’re handmade in Italy to ensure to the finest levels of craftsmanship). Incredibly soft to the touch and light wash in their color, they’re a stunning-looking pair of boots that will elevate any outfit. 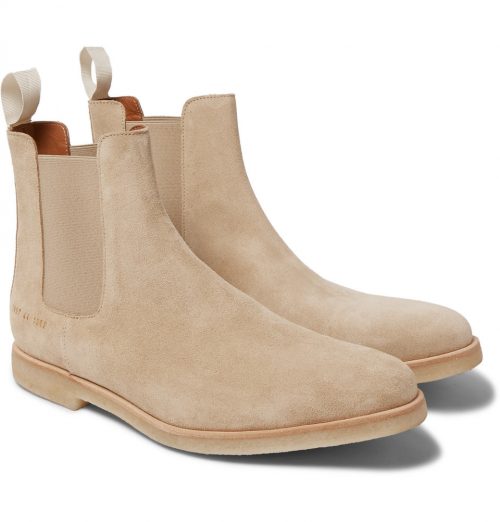 If you’ve already got a few really solid Chelsea boots or are looking to add something really adventurous to your lineup, this platform Chelsea boot from Alexander McQueen is worth buying. The chunky sole is of a similar style to recent, popular sneakers but on a shoe that would be totally acceptable in an office environment. Meanwhile, the red stitching and elastic center add even more character to a boot that’s already not lacking in panache. It’s a bold choice for a bold man, but we think you might be up to the challenge. 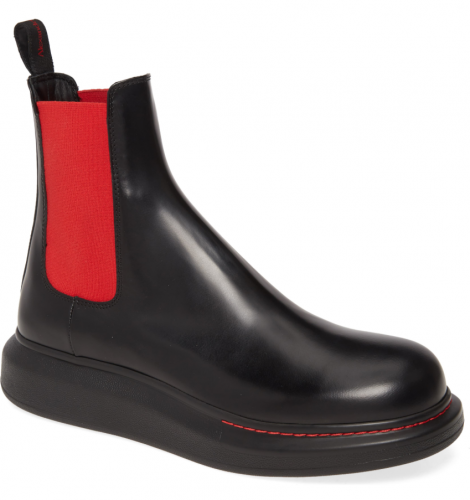