Only the French could create a utilitarian work jacket that’s suave, sophisticated and a worldwide fashion staple. The chore jacket, originally worn by French workmen in the 1800s, was prized for its many pockets, loose shape, and comfortable fit. Now, it’s made by almost every designer and brand out there.

How To Wear the Chore Jacket

While chore jackets have been around for a while, they’ve become more popular in the last few years. Between the pandemic and lockdown, people began to realize they could dress up track pants and joggers. The best chore jackets have a slightly full cut which adds comfort, while the four capacious pockets can be used for storing anything from an apple to dog treats, to your wallet. As athleisure became your go-to for work-from-home gear, the chore jacket became your go-to jacket. It always looks good, and again, those pockets.

Le Mont St. Michel’s been making the chore jacket since the early 1900s, so this is as close to the original chore jacket as you can get. The company did a collab with Blitz, a French Motorcycle company, and the result is this aged-looking jacket. It has a removable quilted vest and the outer is 100% cotton moleskin; it’s water repellant and soft to the touch. 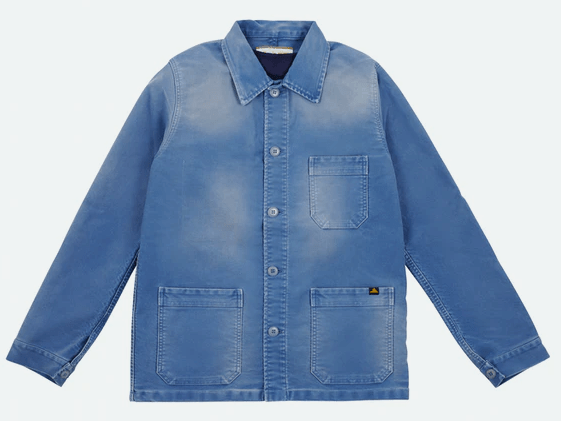 This is one of Buck Mason’s best-selling items, and it could be the best chore jacket as it’s made from boiled merino wool, which is light but warm and perfect for layering on cold autumn days. It has horn buttons and comes in three other colors. 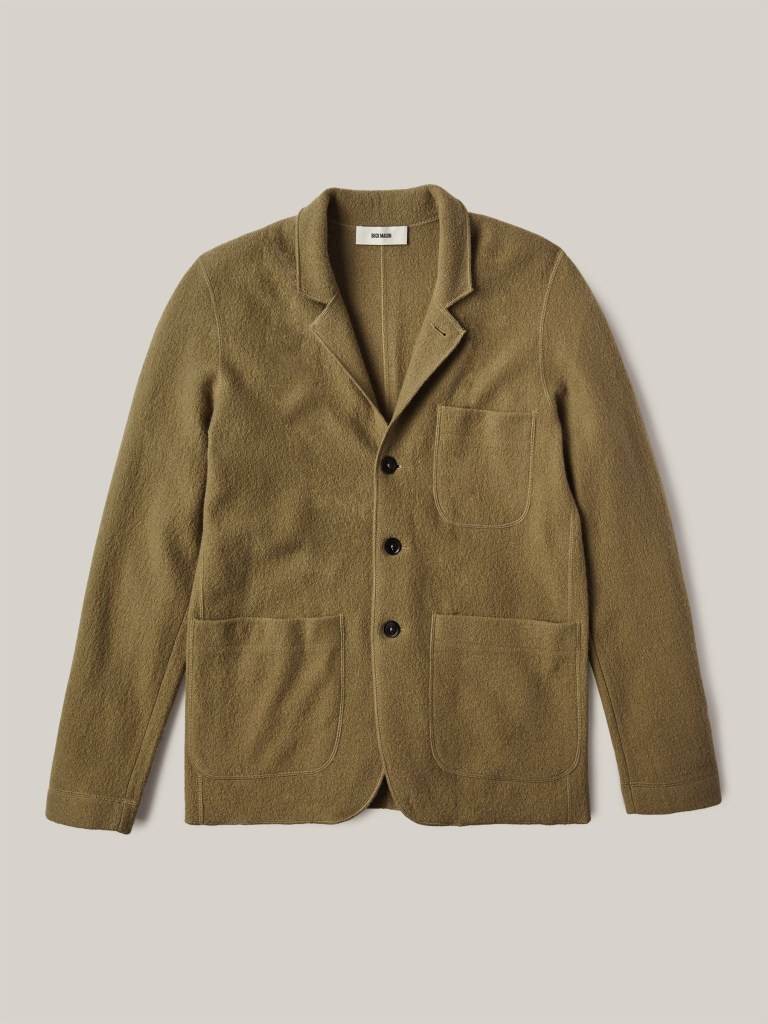 BEST CLASSIC WITH A TWIST

Toddy Snyder worked with Three Looms to create a chore jacket made from Japanese Indigo. The four-pocket coat, modeled on the original, has three outer pockets, one inner and buttoned cuffs. The cotton fabric is made to slowly fade into a rich blue hue. 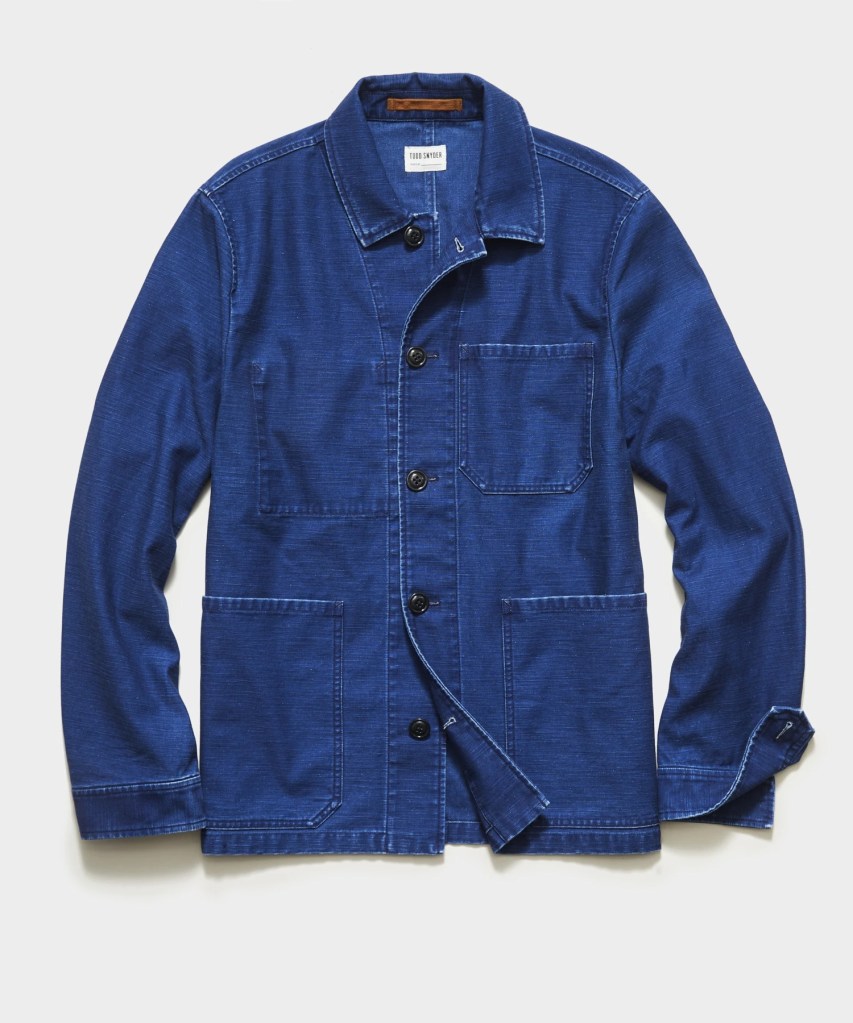 Made from lightweight denim, this chore jacket is like the denim jacket’s more sophisticated brother. It sports white dots on each shoulder and back, and the front has two very large pockets. 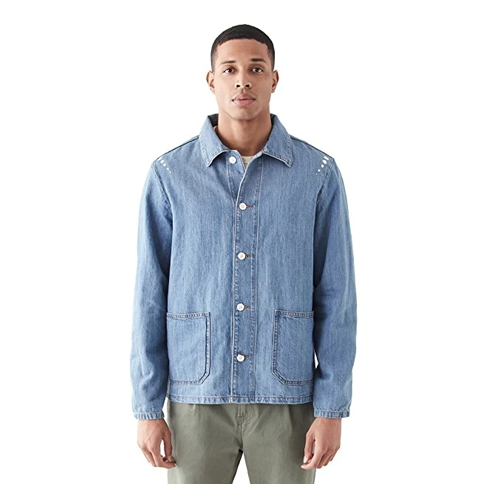 Carhartt’s workwear is now worn by everyone. Durable, classic and made to last, you can’t say a bad thing about the brand. Their chore jacket is the best chore jacket for early, damp, cold fall mornings as the sleeves are lined in quilted material and the body is lined in blanket material. Look good and staying warm with this chore jacket. 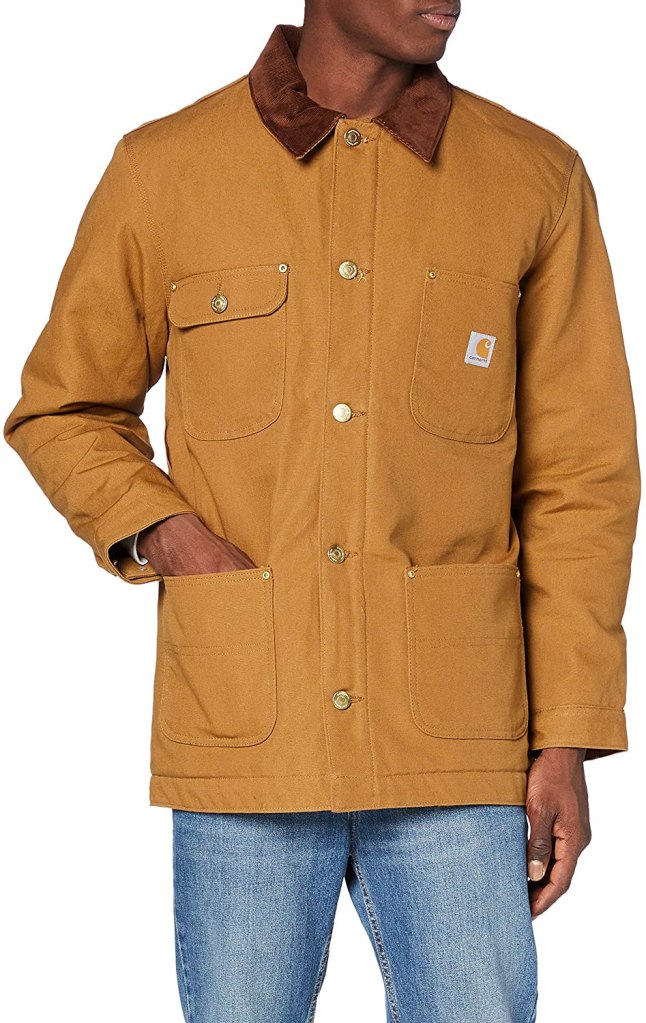 Vans adds skater sensibility to the chore jacket with snaps on pockets and down the front. The regular-fit cotton jacket in black makes going into the office look good, and the full cut can be worn over a hoodie. 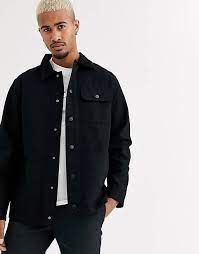 This cotton chore jacket gets the Op Art treatment from British designer Paul Smith. Swirling shades of blue stripes move in every direction across this pocket jacket. 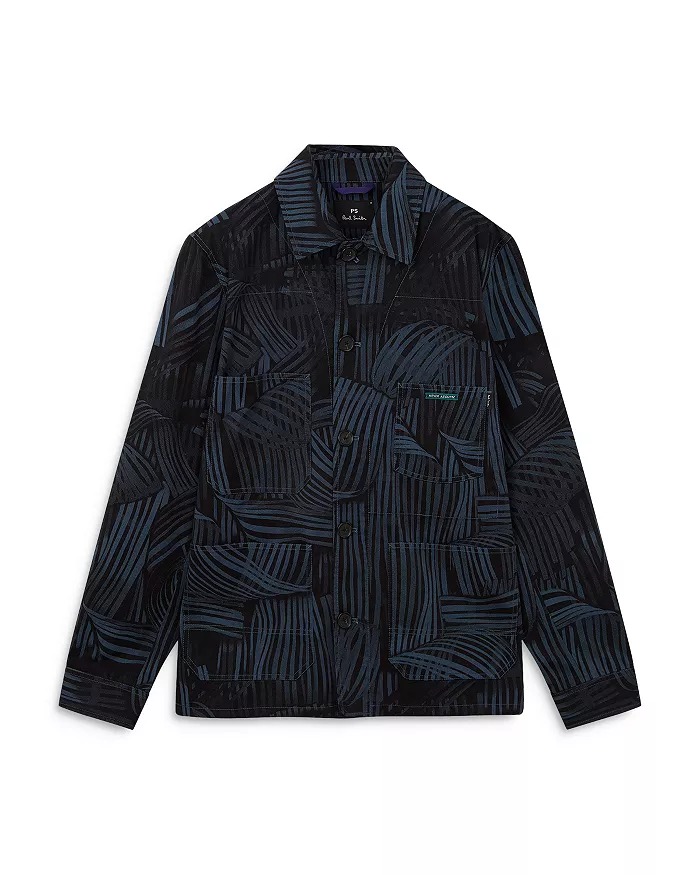 Techwear meets workwear in this ultra-modern chore jacket. It has a thermal regulating membrane, while the outer shell is wind and water-resistant. Climb a mountain wearing it, or use it for travel as it can even be packed into its own pocket. 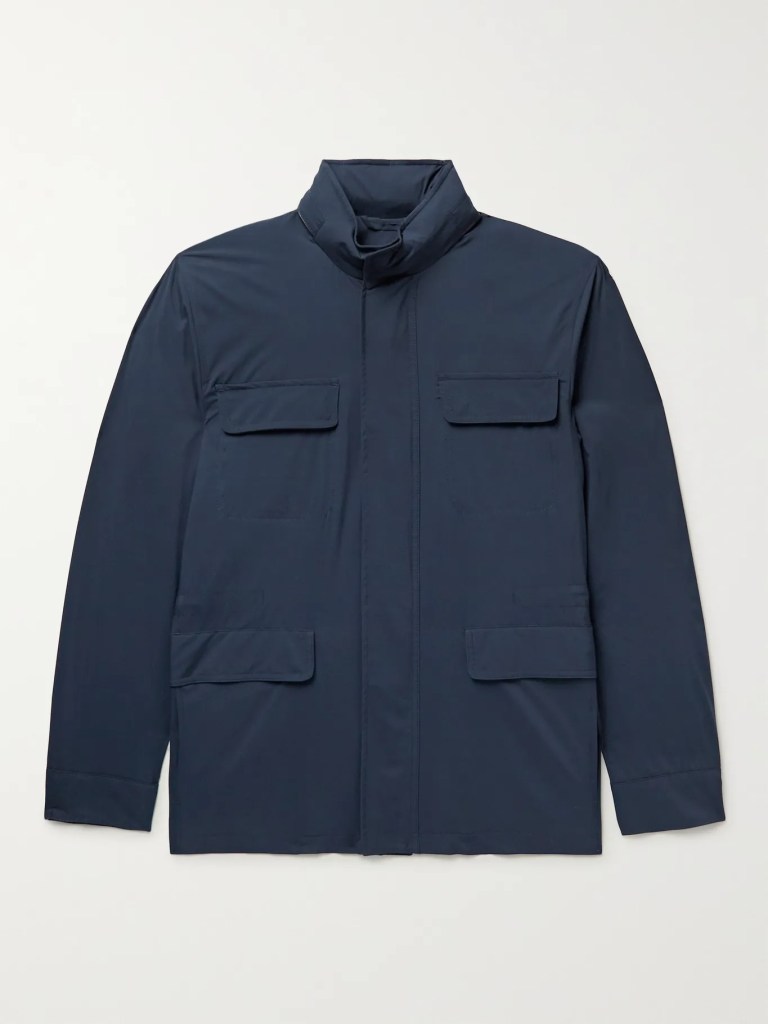 Frame’s three-pocket chore jacket has a snap front and is done in Army Green. The neutral shade can be worn with black, tan, dark denim and if you’re feeling snazzy, try it with plaid pants. 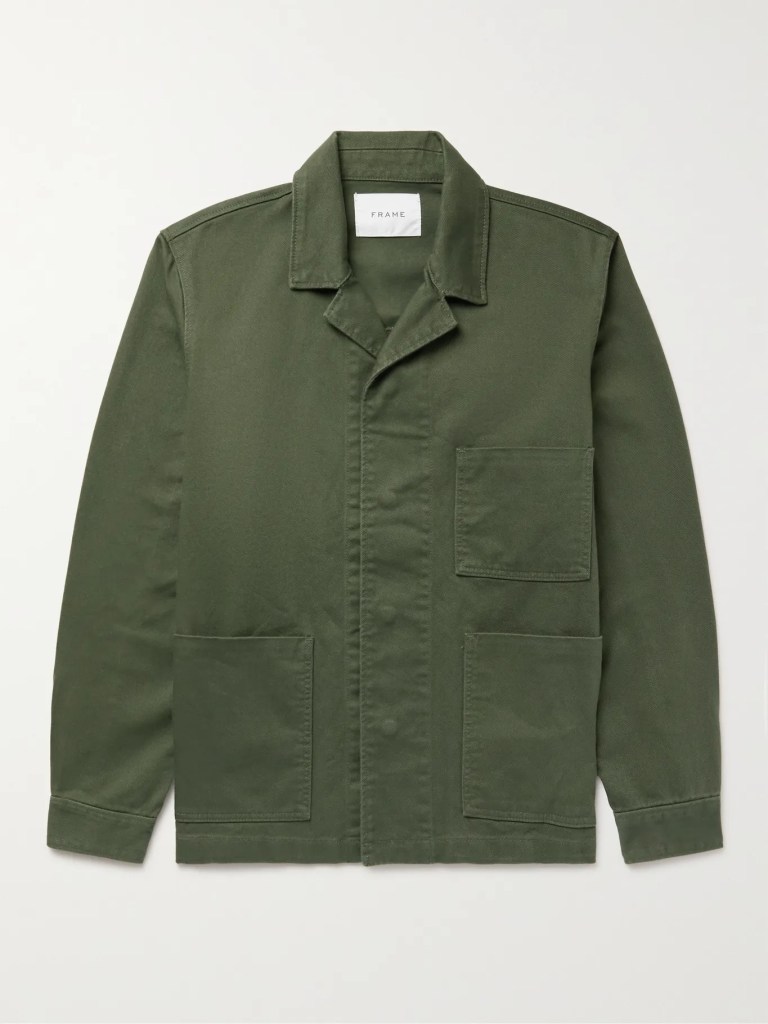 Four oversized rounded pockets that could carry anything from a puppy to a tablet adorn the front of this Western-influenced chore jacket. It has a beige corduroy collar, silver-toned buttons emblazoned with the brand’s logo, and there’s a logo patch on one of the chest pockets. 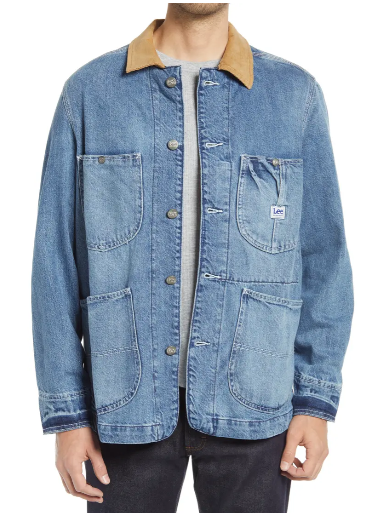 If you’re looking for something lighter in the chore jacket department, we highly recommend checking out this option from Alex Crane. Though dubbed a “kite jacket,” this piece is every bit a chore jacket, built with handy side pockets, a hidden chest pocket and durable linen. This color in particular is easy to match with, making this jacket a standout piece in your wardrobe. SPY received a sample of the jacket and we can confirm that the linen is lightweight and durable, making this the ideal jacket for breezy days by the water. 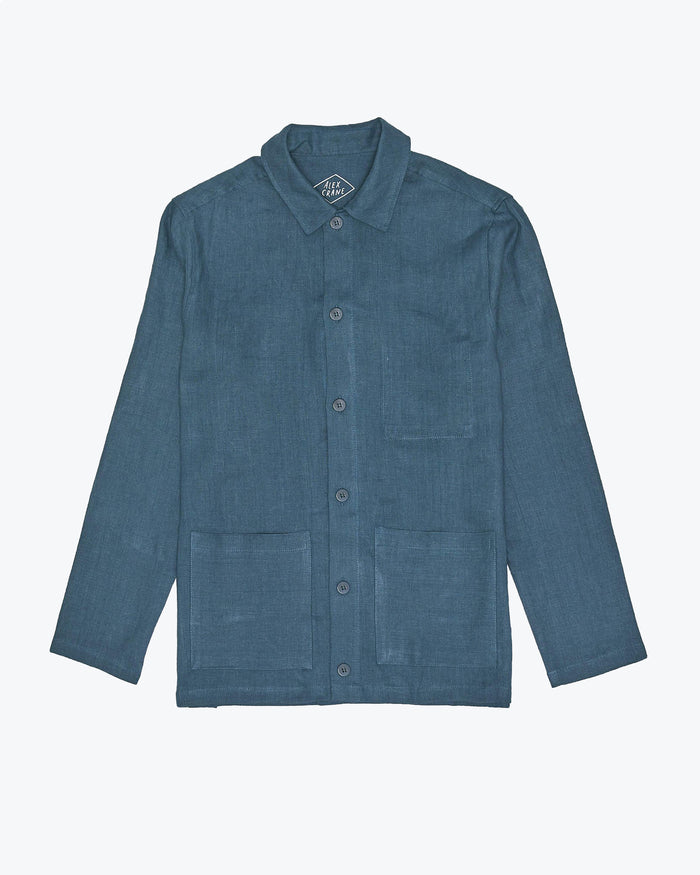 Every Man Needs a Denim Jacket: Here Are 20+ Options For Your Spring Style