Western wear is one of those fashion sub-cultures that periodically gets mined for inspiration, and then pops up as a “hot trend.” That includes the cowboy hat. Cowboy hats for men have been co-opted by so many different fashion tribes over the years that even when Western wear isn’t in fashion, the cowboy hat for men has always been a good choice for a topper.

Where Cowboy Hats for Men Are Most Popular

If you live in the southwestern part of the United States, cowboy hats for men and “gimme caps” are probably part of your daily uniform. You’ve got a dress cowboy hat for meetings and dates. A work cowboy hat for wearing under the blazing hot sun dealing with recalcitrant cows, and so on. For the rest of us, well, we find ourselves taking music, pop culture and TV shows as cues on how to wear them. And how to make it look effortless.

A Brief Dive Into the Cowboy Hat and Pop Culture

Men’s cowboy boots are popular again, and they’re sharing the spotlight with men’s cowboy hats. But why now? It’s a street style, believe it or not, that was lensed during fashion month; from Milan to New York City, everyone was wearing cowboy-influenced goods.

The LGBTQ+ community has also helped re-popularize the cowboy hat in recent years, as has the viral Yeehaw agenda. Lil Nas X made them seem pretty damn cool after the release of “Ole Town Road,” while movies like “Once Upon a Time in Hollywood” and TV shows like “Yellowstone” show how easy (and cool) it is to wear them. With Diplo and Post Malone’s love of the nudie suit and Instagram accounts that document Americana from a Black perspective, pop culture has fixated on the most American accessory of them all: the cowboy hat. Yeehaw!

This renewed interest in Americana has also made apparel like men’s Western boots popular outside of places like the Deep South and Texas. If you’re interested in this trend but find that denim shirts and Cuban-heel boots are too subtle for you, then you need to invest in a Western-style cowboy hat, a genuine men’s style trend since 2019.

If you remember anything from your high school history classes, there was a section on America’s Westward Expansion. Parsing it down to the simplest facts: While men were moving west in the early 1800s, it wasn’t until after the Civil War that Manifest Destiny truly took hold. When the first wave arrived, the earliest cowboys copied the clothing of the Vaqueros who had been riding the plains before them. If you look at early photos of cowboys, many of them wore sombreros.

By 1849, they started mixing it up by wearing bowler hats, aka derby hats. Designed in England by Thomas and William Bowler for hatters Lock & Co Hatters, they were “the thing” until a Pennsylvania-based hat company designed the very first cowboy hat. Known as “The Boss of the Plains,” this cowboy hat was created by Stetson in 1865. To this day, Stetson and cowboy hats are synonymous.

That hat didn’t look like what’s now called “The Cattleman.” That cowboy hat only became the most popular style due to a movie cowboy. Tom Mix was Hollywood’s very first cowboy movie star, and his cowboy hat was designed by Stetson. It has three creases in the crown and a slightly curved brim. And yes, you can buy the Tom Mix cowboy hat today.

The word sounds funny, but “hatters” is the term used for brands, people or companies that make hats. Below is a list of the top cowboy hat companies.

How To Pull Off a Cowboy Hat

Cowboy hats are undoubtedly a bold statement, and they take confidence to wear. But styled correctly, you won’t look like you just stepped off a movie set. An outfit consisting of a white tee and blue jeans is perfectly topped by a tan cowboy hat. Or finish a suited and booted look with one of the all-black wool hats below. The key is finding the one that fits your style and having enough confidence to wear it with pride.

Below, we’ve rounded up some of the most stylish (and wearable) cowboy hats, ranging from classics from brands like Stetson to comfortable straw hats for summer. Saddle up, because these are the cowboy hats to buy in 2022.

You can’t have a list of cowboy hats without the most iconic style ever created, made by the most iconic brand. The cattleman-style cowboy hat is, pardon the pun, the workhorse of cowboy hats. It’s at home on the range, at the farm and in the office. This silhouette is what immediately comes to mind when you think “cowboy hat.” It’s also the top pick for any modern TV or movie cowboy. 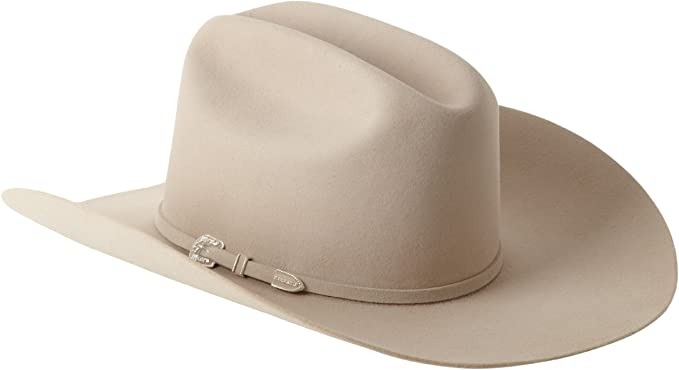 Yes, yes, we’re using Stetson for our No. 2 hat, as no list of cowboy hats is complete without the Open Road. It’s one of Stetson’s most popular styles and has been worn by musicians, ranchers and presidents (LBJ). This hat is made from a fur felt and has an oval shape with a wide, flat brim with a rolled edge and dents on the crown. And it looks great with a suit.

As mentioned earlier, Resistol is one of the top cowboy hat brands in the country. If you want an authentic cowboy hat but are frugal, this is your deal. The hat is a modified version of the classic Cattleman cowboy hat. It’s tapered with a 4 1/8-inch brim, and a 4 1/8-inch crown. It comes in brown or black. 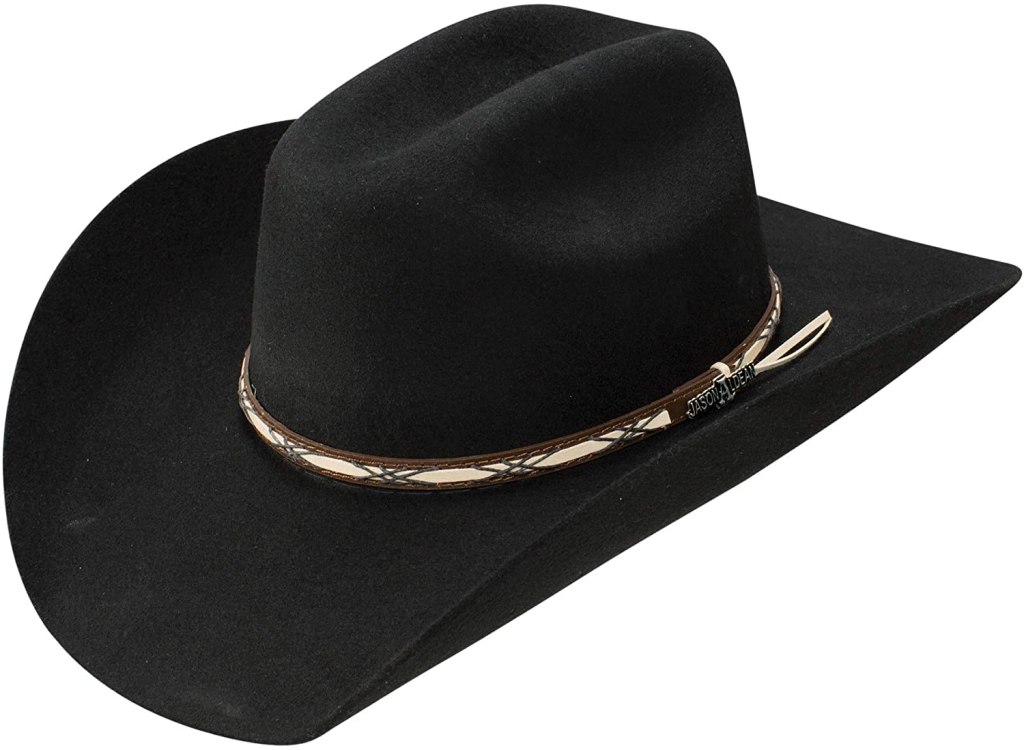 The exact replica of Kevin Costner’s hat in “Yellowstone,” this hat is made to order. Handmade from buckskin with a braided hatband, it has a 4 1/14-inch brim and a 5 3/4-inch crown height. Be patient, as it could take between seven to nine months for the hat to be created and then shipped. 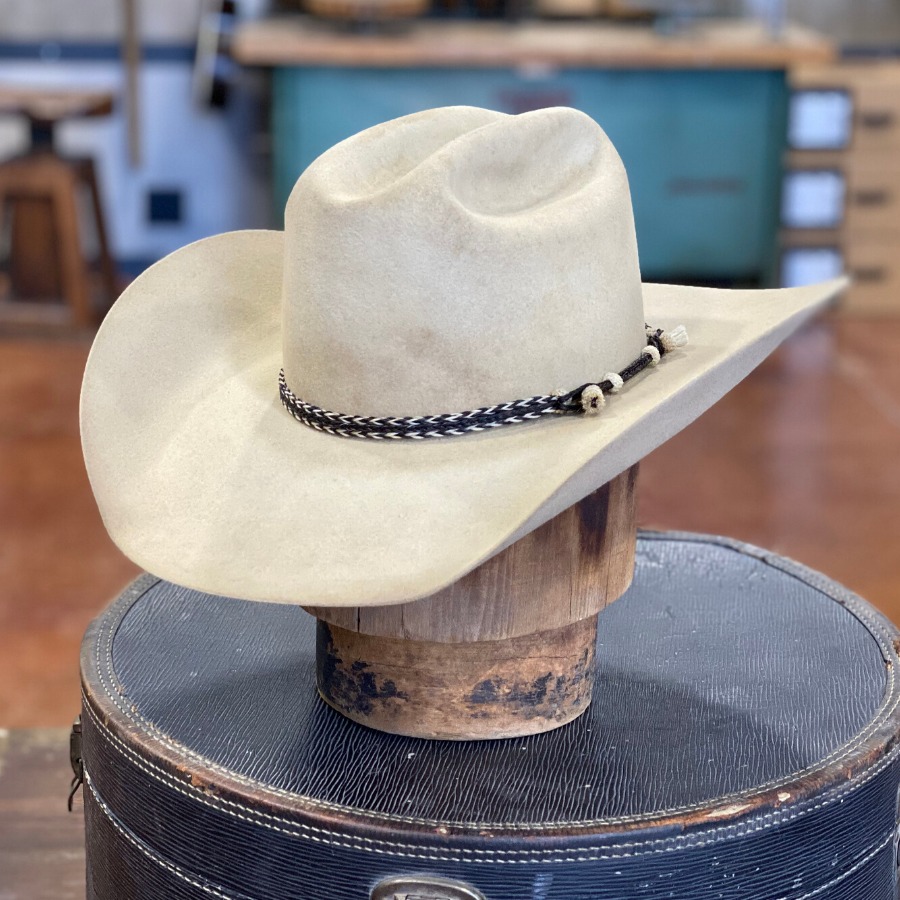 Named after the Clash’s song “The Guns of Brixton,“ Brixton was born in a San Diego garage in 2004. It’s now an international brand that creates modern classics for men and women. Its take on the iconic cowboy hat is modernizing the silhouette, giving a 3-inch brim and a slim hatband that’s centered with a small metal brand plaque. Made in wool felt, this hat can be worn year-round. 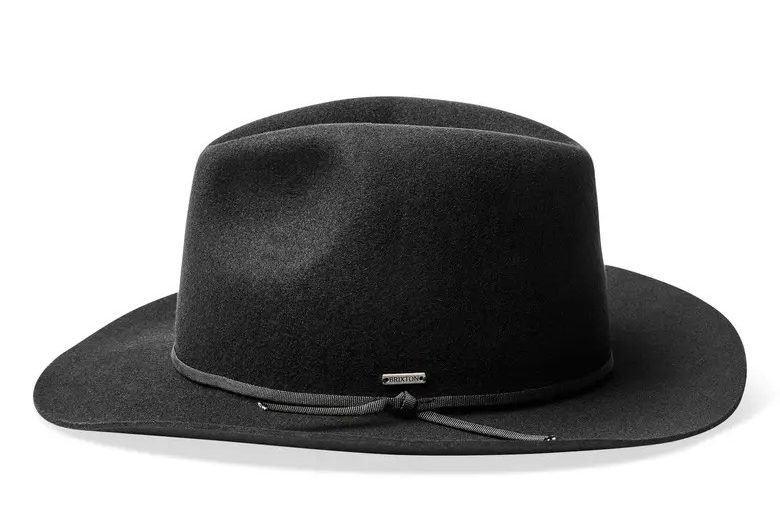 BEST AT BOUNCING BACK

Don’t worry about sitting on this hat, it bounces back. This wool cowboy hat sits high with a 4.75-inch crown and a nicely curved brim. Made from crushable wool (yes, it’s a thing), the luxe details like a leather-accented hatband and inner moisture-wicking sweatbands are what you usually find in a higher-priced cowboy hat. It also comes in black, camel and olive green. 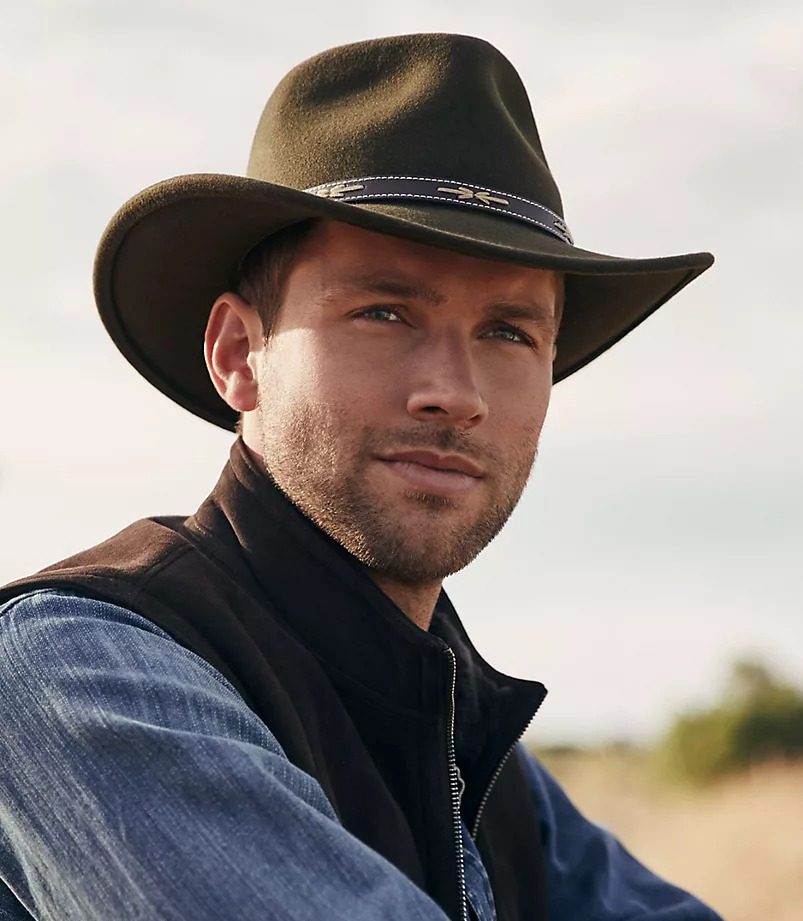 Prefer a cowboy hat that’s more “citified”? The rancher-style hat is your best choice for a cowboy hat with a touch of a metropolitan attitude. Elliston retains its Western roots, but Two Roads Hat Co shortened its brim, making it suitable for speakeasies and offices. The hat has a wrapped leather hatband that’s highlighted with a metal disc whose design is reminiscent of a cattle branding iron design.

This cowboy hat is made with palm straw, meaning it’s durable. It’s got fancy details like leather trim around the brim and the leather hatband is studded with conchos (medallions for you non-Western wear people). The company stands by its hats with a lifetime guarantee. Anything unravels, shrinks or falls apart, and they’ll replace it. 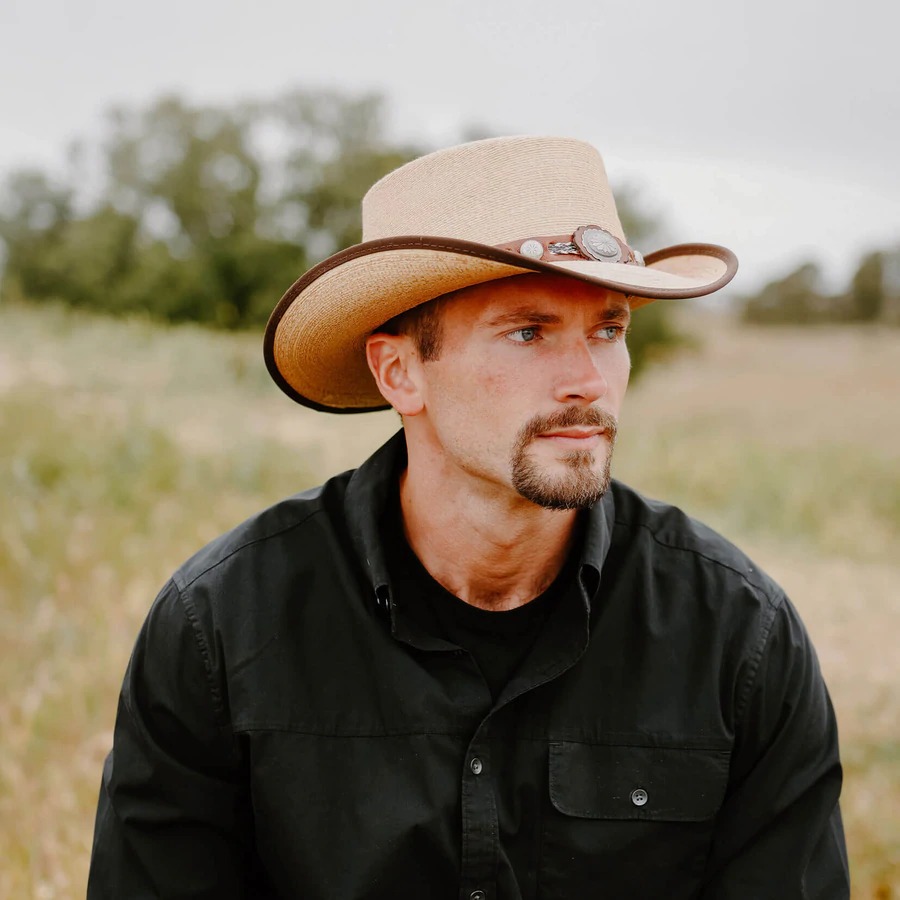 Looking for a straw hat that will make an impression, but not break the bank? Toss on this baby. This unisex straw cowboy hat sports an upturned brim on the sides and three creases in the crown. The wide faux leather hatband is studded, and at the center is a silvery steer’s head. The interior has an elastic sweatband, and it’s non-crushable. 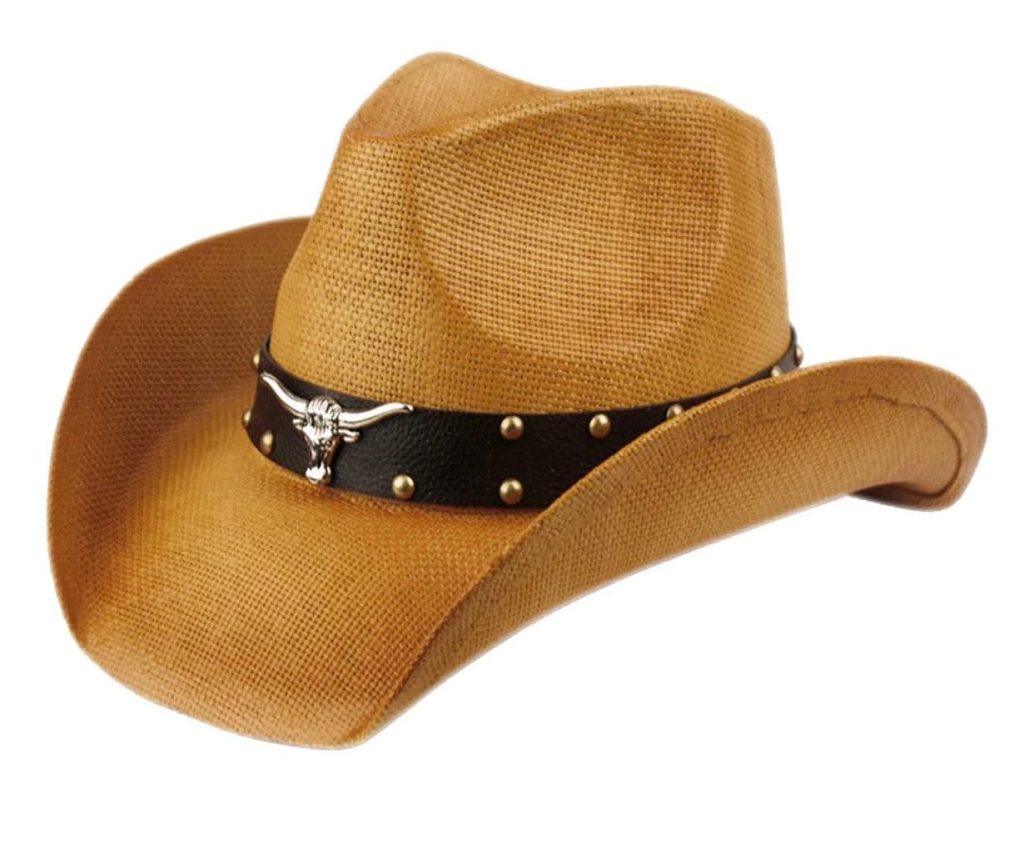 Lovers of things unadorned will opt for this wool-felt cowboy hat. The only shiny object is a subtle three-piece silver buckle on the hatband. Inside is a leather sweatband to keep things cool. Try it in black or brown. 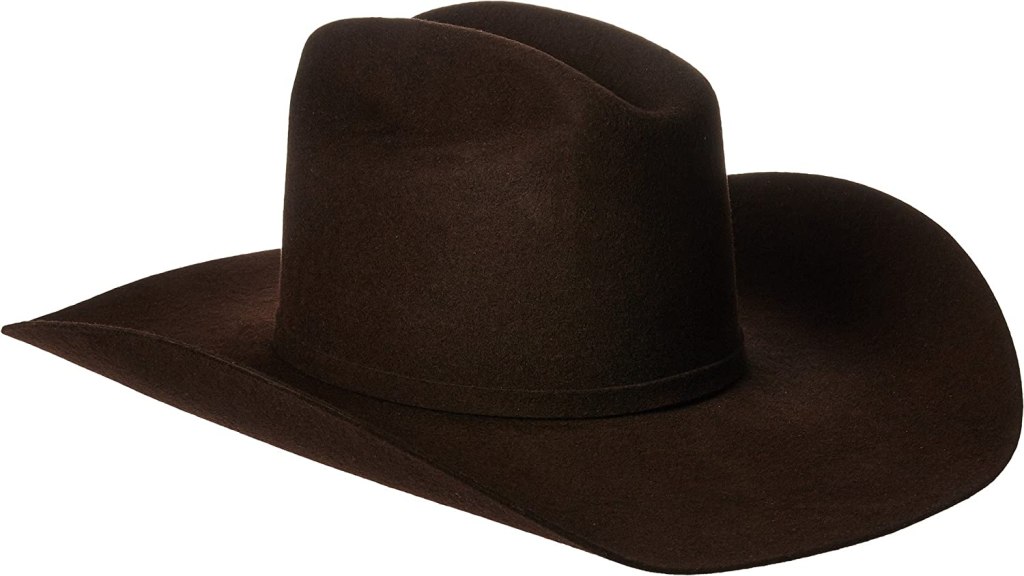 The Cattleman cowboy hat looks really cool in black straw. Lightweight and great protection from the heat, this hatband’s decorated with conchos (medallions) for added Western flair. The interior hatband is elasticated, so it will easily fit your head. 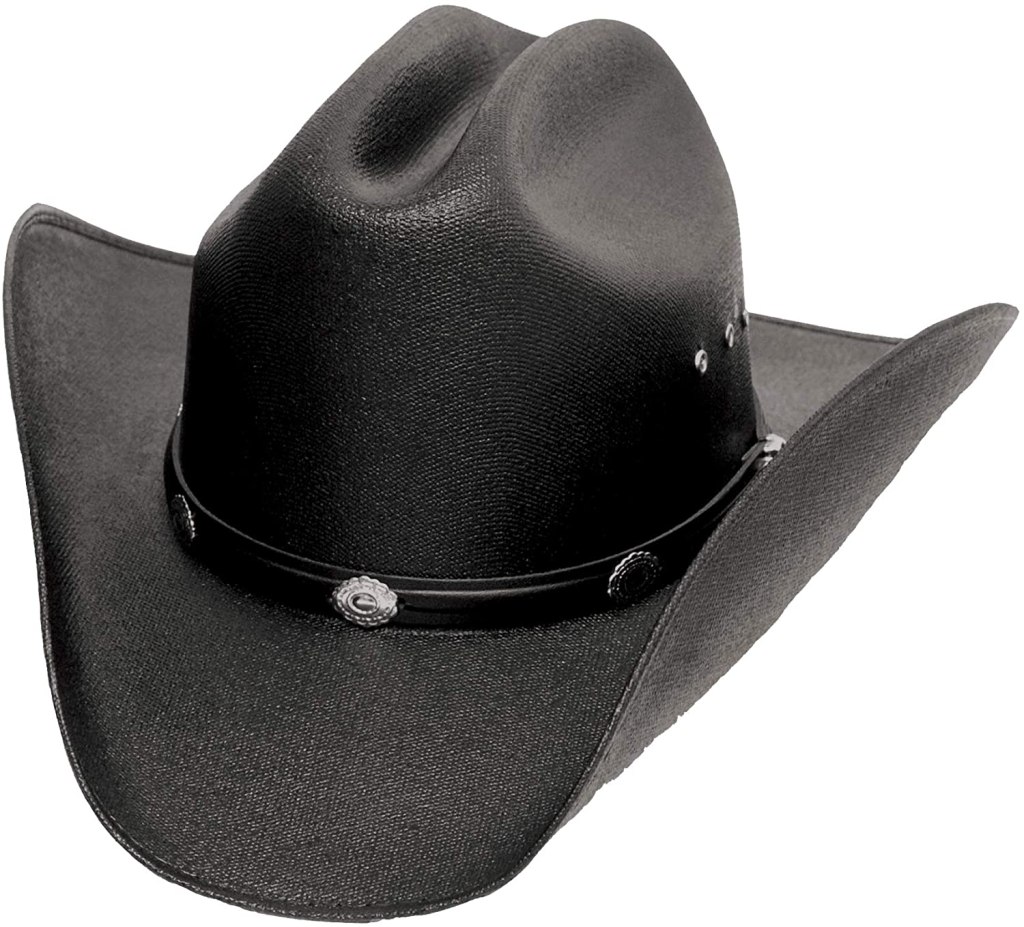 BEST FOR HOT DAYS AND NIGHTS

Designed specifically for brutal weather and those who work in it, this hat’s crown is vented. Think of it as a fan for your head. Each movement brings a breeze that rustles through your hair, and the open weave crown creates a nice contrast to the tighter weave of the rest of the hat. The crown is set off by three creases, like a Gus crown, and has a deep brown hatband.

We’re ending this cowboy hat roundup with one of the most iconic cowboy hats ever created for men: The Tom Mix. As mentioned earlier, Mix was Hollywood’s first cowboy star. He started in silent pictures starting in 1909, and his last movie came out in 1935. Stetson uses rabbit fur to create the ultra-soft cowboy hat. It has a wide five-inch brim, and the classic Gus crown measures 4 1/2-inches by 6 1/2-inches. The cowboy hat is trimmed with a grosgrain ribbon hatband.