Ever since the King of Cool, Steve McQueen, wore them, everybody has wanted a pair of the best folding sunglasses. He helped make Persol a household name and Persol still makes foldable sunglasses bearing his name today.

But when it comes to the best folding sunglasses, you don’t have to spend a fortune on Persols to get the benefits. Other classic brands like Ray-Ban as well as new upstarts like Roav Eyewear, Foldies and Hexton have sought to capitalize on the classic cool image as well as the unmatched convenience of folding sunglasses.

Traditional sunglasses are easy to break, but the best folding sunglasses utilize tiny hinges on the nose bridge and temple arms to collapse into a small, packable square that won’t snap under pressure. This means you can throw them in your pocket, everyday bag or suitcase without worrying about breakage. Plus, the compact, square design makes them more convenient to store than traditional sunglasses.

We’ve picked some of the best folding sunglasses below from established brands, some hot newcomers as well as a couple of cheaper options, so you can pick the perfect pair or two for any activities you might get up to.

One of the best players to recently enter the folding sunglasses game has to be Roav Eyewear. At the moment, the brand offers 61 total designs across more than 20 different styles of frames and every single pair can fold.

These aren’t your janky, run-of-the-mill frames either. Not only are the designs stylish, but the sunglasses are well-made too. Roav uses patented micro hinges that are press-formed into stainless steel frames, so there are fewer parts and fewer breaks. Every pair of sunglasses uses polarized lenses to minimize glare and the lenses also protect your eyes from harmful UVA + UVB rays. Lastly, these bad boys aren’t too heavy, weighing less than 20 grams, about the weight of a AA battery, so you don’t have to worry about uncomfortable and unsightly nose indentations.

For our pick, we’ve got our eyes on the Balto frames in gold with round silver lenses. They’re bound to be among the coolest frames around wherever you happen to be. 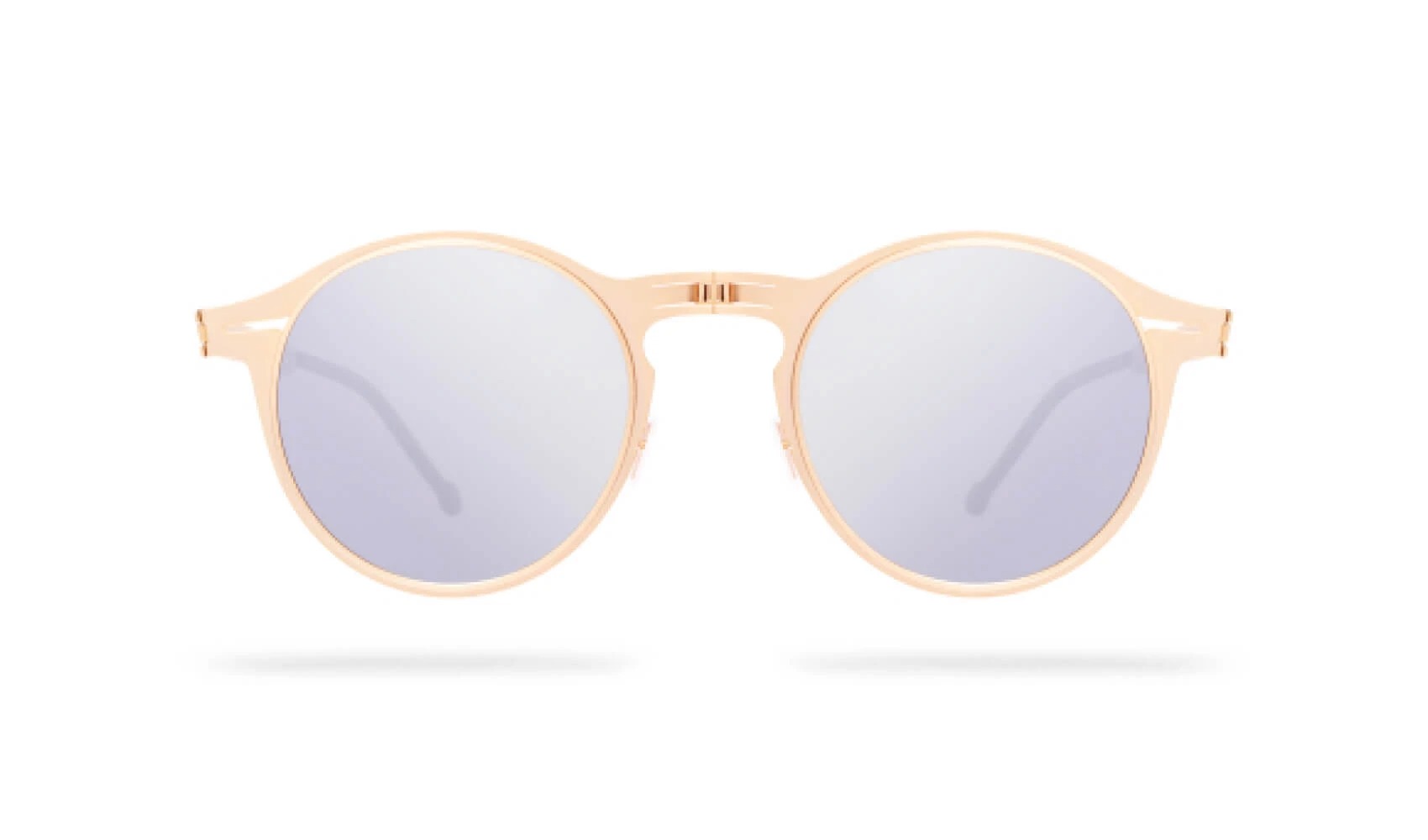 As you probably guessed from the name, Foldies specializes in folding shades. These classic Wayfarer-style frames are one of the brand’s best products with a timeless look that comes in 15 modern color schemes. They all feature Foldies signature collapsible design and what Foldies calls its HepTEK lens system: lenses made with seven layers to offer you top-notch scratch protection, polarization and UV protection. Because the frames are made with high-quality TR-90 composite plastic they’re comparatively cheap, too. 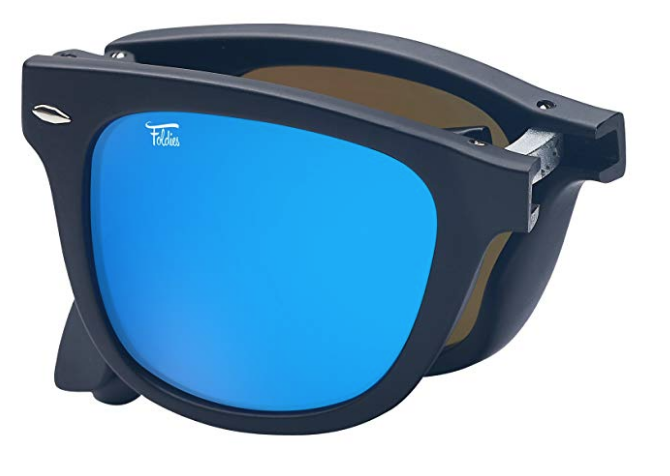 Another great pair of folding shades from Foldies are these aviator-style frames. They’re a stylish adaptation of the classic design, and make a great go-to for traveling because they look good with everything from swim trunks to a suit. You get the same benefits as the Foldies Wayfarer-style frames, except these have metal frames instead of plastic, so pick up one of eight color schemes to match your personal style. 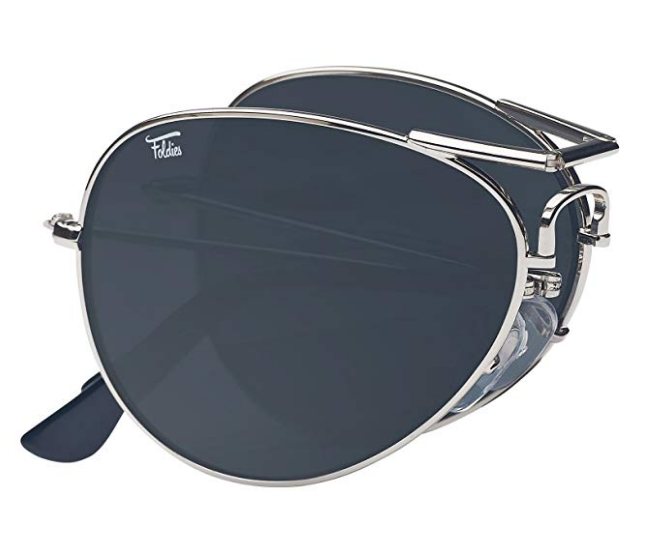 Hexton is another brand trying to plant its flag in the folding sunglasses marketplace. Designed in London, Hexton’s Sloane Tortoiseshell frames take a page out of Persol’s design book.

The sunglasses feature rounded lenses with a folding design that bends where the nose piece touches the frames, as opposed to the center of the nose piece itself. The frames are made from a solid polyetherimide plastic with aluminum temple arms. Overall, these frames are a cheaper take on a classic frame and that’s a whole lot better for your wallet.

On the downside, despite Hexton’s stylistic chops, the brand only offers two designs with five total color schemes. But what Hexton lacks in variety it makes up for in its pricing and the coolness of its style, even its offerings are limited. For what it’s worth, Hexton’s other style, the Leyton, is a take on a Wayfarer with polycarbonate frames, so if that’s more your style, go for the Leyton instead. 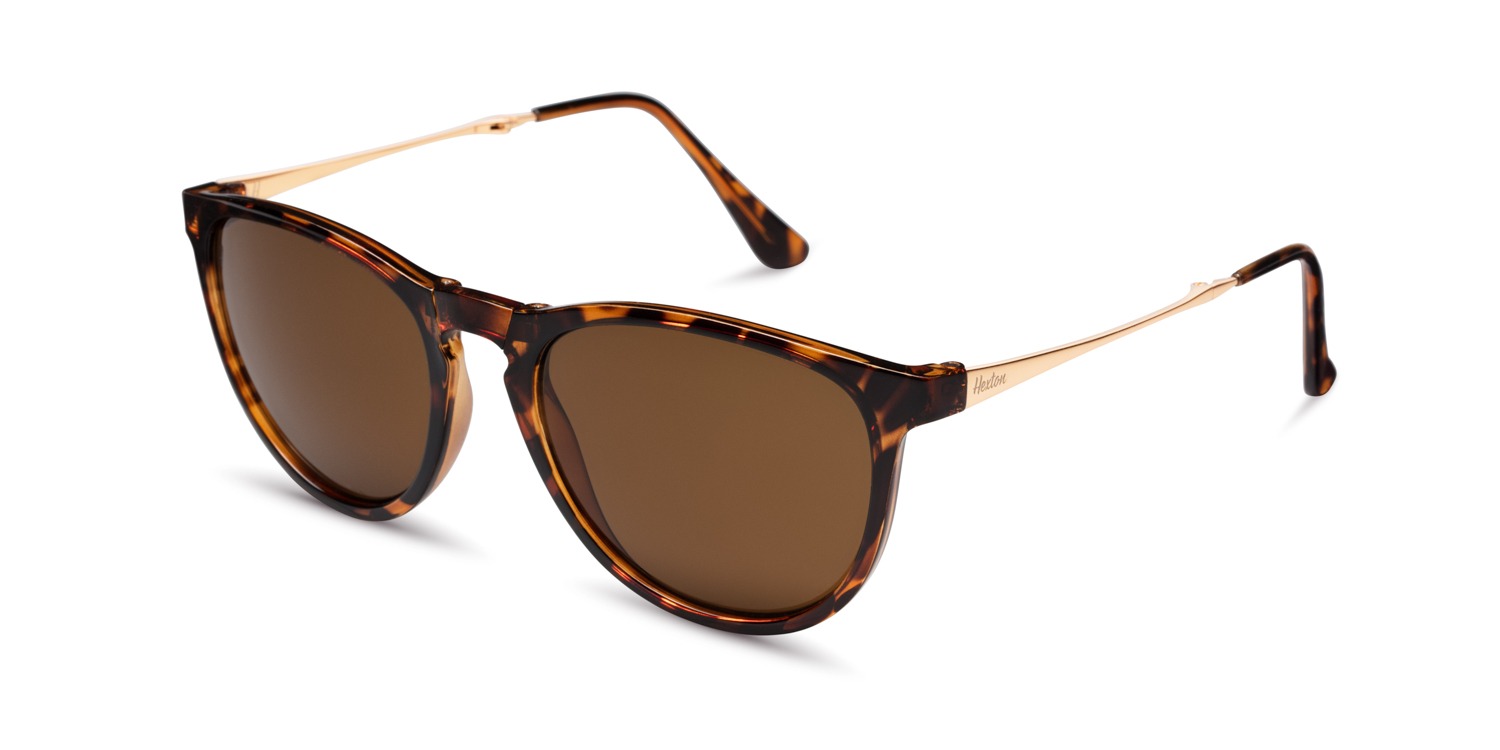 We mentioned including some cheaper options at the top and whether we’re happy about it or not, Amazon always has a cheap version of whatever you’re looking for. That’s where you can find the Hindar Panda Folding Sunglasses, among the lowest-priced folding sunglasses we found that aren’t gas-station quality. And well, that’s the main reason why we recommend them.

You do have six different varieties to choose from, but the lenses are a bit bigger than competing lenses, like a bit too big for some people we suspect, and the folds aren’t as clean looking as more expensive glasses. Also, Hindar Panda includes a traditional sunglasses case, which is great but defeats the purpose of having folding sunglasses.

On the upside, besides the price, these lenses are made from solid plastic and offer polarization and 100 percent UV protection, which is impressive for folding sunglasses at this price point. So if convenience and price are your priorities, then the Hindar Pandas are the best folding sunglasses for you.

For our pick, we like the tortoiseshell frames with the silver lenses. 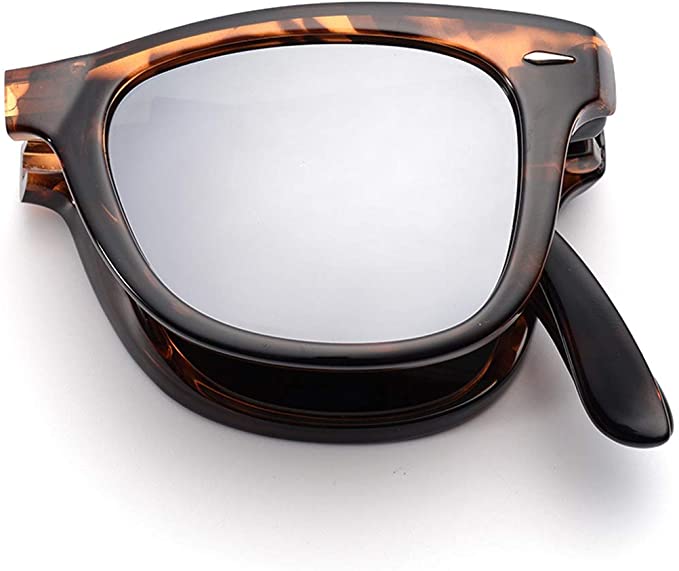 This wouldn’t be a great round-up of the best folding sunglasses without touching on Privé Revaux’s offerings. The Hollywood-founded brand has been producing high-fashion frames for a few years now and their Go-Getter Foldable Sunglasses are worth checking out.

These folding frames are under $30 in keeping with Privé Revaux’s “luxury for the masses” mission, and they come in three cool color schemes with plastic frames. That price point is all the more friendly when you consider that the lenses are polarized and offer UV protection. The nose fold also looks pretty seamless for such a cheap frame, which is a testament to the design.

The only downside is the best color scheme, the chocolate tort, is sold out. But the crystal frames with yellow lenses are cool, transparent and perfect for a day at the beach. And if they don’t pique your interest, you can always go for the Go-Getters in caviar black.

Ray-Ban has upgraded a few of their best-sellers with a foldable design, and the Clubmaster with matte black brows and templates and blue gradient lenses is our favorite of the bunch. These folding browline sunglasses give you a unique look that’s somewhere between a Wayfarer and an aviator as well as the high-quality build you’d expect from Ray-Ban. Take a look below for yourself. These foldables are cool as hell. 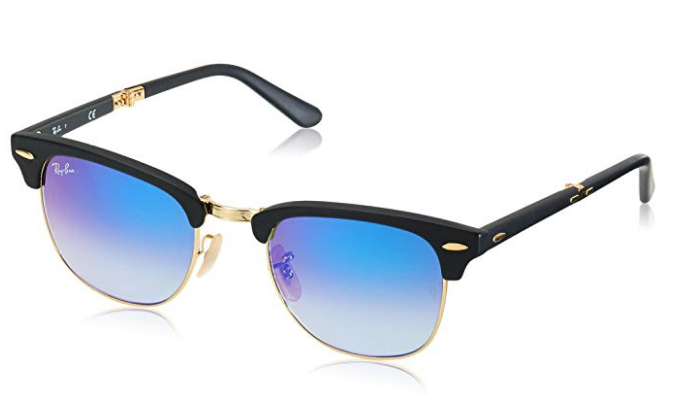 We couldn’t help ourselves. We had to let you know about one of Ray-Ban’s other frames updated for folding: the classic Wayfarers. Yup, it’s all the cool of Ray-Ban’s most popular frames with all the convenience of being able to fold. You’ll never regret buying the Ray-Ban Folding Wayfarers and the light Havana color scheme is right up there with the coolest sunglasses of all time. 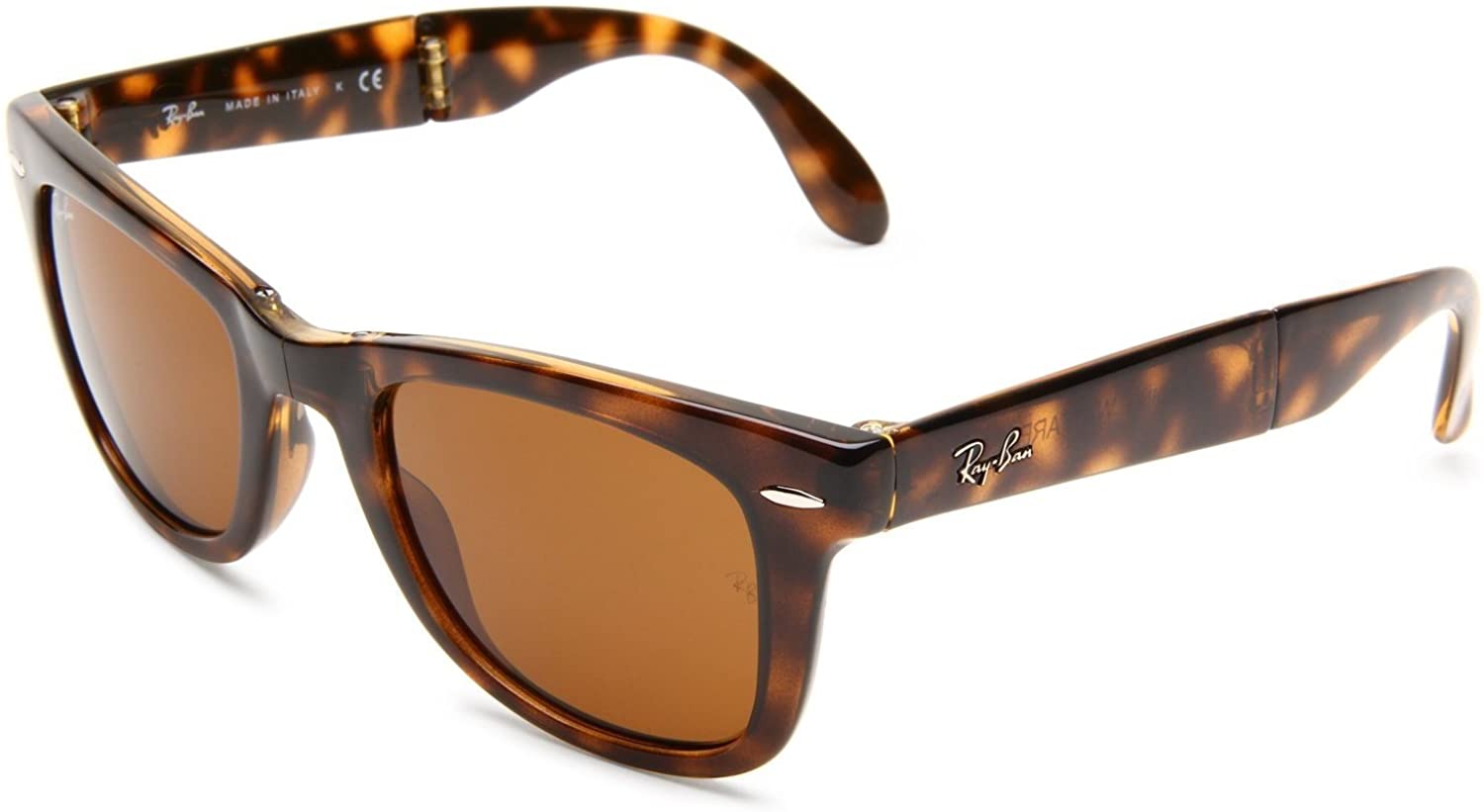 Speaking of the coolest sunglasses of all time, Persols were made famous by one of the coolest guys of all time, Steve McQueen, and in 2020 they’re as stylish as they were when he wore them in the ‘60s. We love these Persol 714s with Havana frames and brown lenses because they are the embodiment of a timeless, cool look that will never go out of style.

If you want the real deal, you can pick up a pair of Steve McQueen-branded Persol 714s today in three different color schemes from Persol’s website. The black frames with blue gradient lenses will never stop being the absolute coolest (and neither will Steve McQueen for that matter). 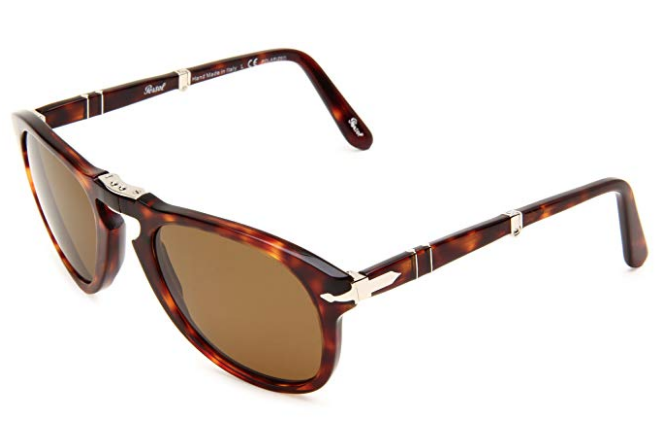 If you’re looking for something more on the high-fashion side of things, these black Burberry Folding Sunglasses have a round lens that looks just the right amount of different. As opposed to most plastic frames, these are made from acetate, or cellulose acetate, which is organic and renewable as well as more lightweight and more durable than many plastics. (You can read all about acetate here if you’re curious.) That makes these sunglasses a bit more expensive, but they’ll last longer because of it.

The only downside of these sunglasses is the lack of polarization in the lenses, though they are anti-reflective and will protect your eyes from UV light. That’s high fashion for you, all style with the occasional oversight on substance.

Nonetheless, if a more unique style is your priority, these Burberry frames are the best folding sunglasses for you.

For another pick in the high-fashion realm, we recommend these Persol-esque folding sunglasses from Ralph Lauren. They come in a cool light yellow-brown color with black non-polarized lenses. Unlike other frames that try to hide the fact that they’re foldable, these frames are loud and proud about it, with a noticeable hinge on the nose piece. While that might seem like a con, we promise it’s an easy way to make anyone who sees your frames jealous that your sunglasses fold and theirs don’t. 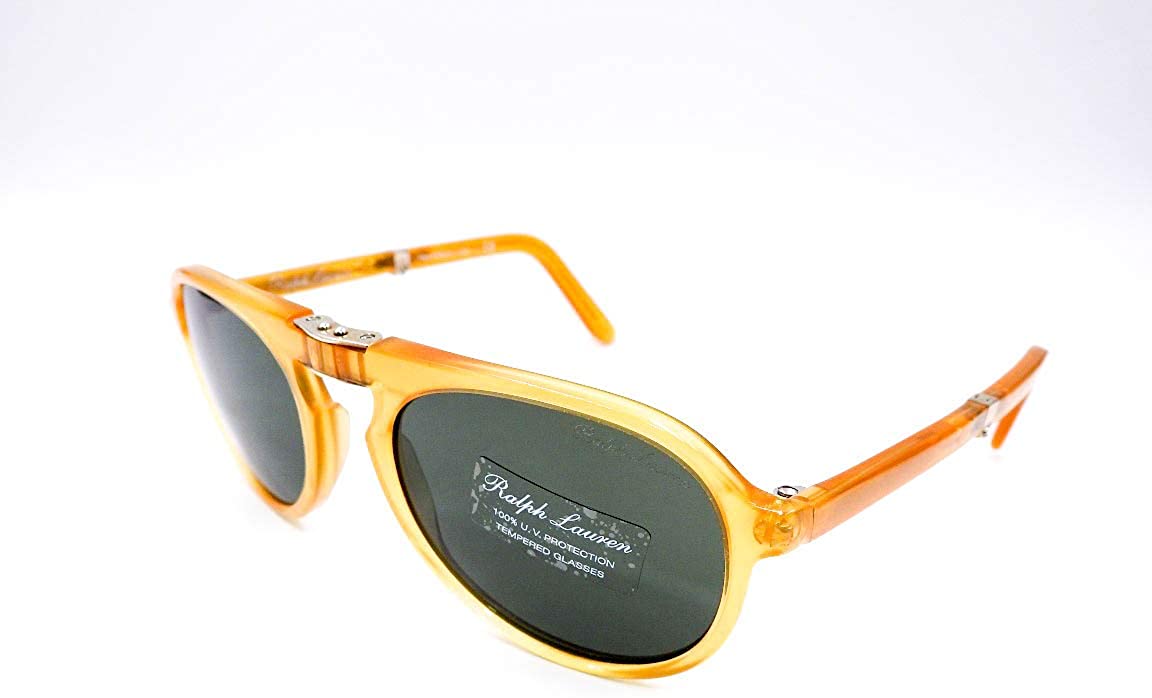 Sorry Warby Parker, These Are the Best Places to Buy Cheap Glasses Online