* Easy summer shoe offers breezy comfort and versatility
* Huarache directly translates into English as “sandal”
* Hippies and surfers in the U.S. helped popularize the huarache during the 1960s

With August around the corner and temperatures expected to climb even higher, it might be time to reconsider your footwear choices in order to keep cool the rest of the summer. Instead of grabbing yet another pair of flip-flops or venturing into mandal territory, consider the huarache.

These pre-Columbian era sandals originated in Mexico hundreds of years ago but the more modern version with recycled tire soles are said to have first popped up sometime in the 1930s. Though it’s difficult to pinpoint when exactly huaraches became popular outside of Mexico, the general consensus seems to be that hippies and surfers in the U.S. hyped them up during the 60s. It didn’t hurt that the Beach Boys sang about them in their 1963 hit, “Surfin’ U.S.A. ” either.

Add Comment
1 Person Commenting
Louis
5 years
I have a pair in the box,never worn because of ageless style but since your shinning light...

Add Comment
1 Person Commenting
Louis
5 years
I have a pair in the box,never worn because of ageless style but since your shinning light…

Since then, the huarache has evolved from your basic sandal into styles that are more reminiscent of shoes than, well, huaraches. Purists will say that in order for something to be a true huarache, it must be handmade and include a woven leather upper. In its most basic form, the huarache is comprised of leather strips that have been woven in and out of the soles resulting in intricate patterns up top.

Here are two modern takes for men and women. 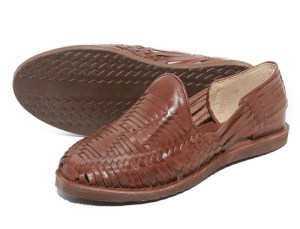 Sbicca has a version for the ladies with a rounded open-toe design and woven leather upper in five different colors, including a fun multi-colored version. A padded insole provides comfort, while the synthetic outer sole provides grip. 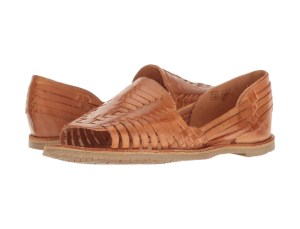