Bomber jackets, a staple for any guy’s wardrobe, have undergone a sea change during the pandemic. Athleisure was what we lived in during lockdown, and its fabrics are being used in everything. The best bomber jackets for men are now like that track jacket you lived in when you were working from home. There are knitted bomber jackets that can double as cardigans under a heavy wool jacket when it’s cooler. There are techwear and utilitarian-styled bomber jackets that don’t look out of place at the gym or the office.

You can pair one of the best bomber jackets for men with dark washed jeans for work, or joggers on your off days. As it gets cooler, layer a crew neck sweater under it, and if you’re feeling jaunty, add in a looped scarf.

Bombers have been around for several years. They started off as part of a military pilot’s wardrobe during World War I. They were so easy to wear that those pilots wore them on their off-hours, and after World War II they crossed over into civilian wear. The MA-1 Bomber Jacket (that’s its name) caught the eye of menswear designers, and the next thing you know James Dean was wearing a red one in Rebel Without a Cause. Back in the Sixties, Ryan O’Neal wore one when he was in TV’s Peyton Place. It became such a hot item that it was renamed “The Harrington” after his character.

Check out some of the best bomber jackets for men to wear now that will surely turn some heads as you strut down the street this season.

Made with cotton and recycled materials, this bomber jacket comes with a 365-day guarantee. If it falls apart or fades within your first year of owning it, Everlane will replace it for free. And it comes in four other colors. 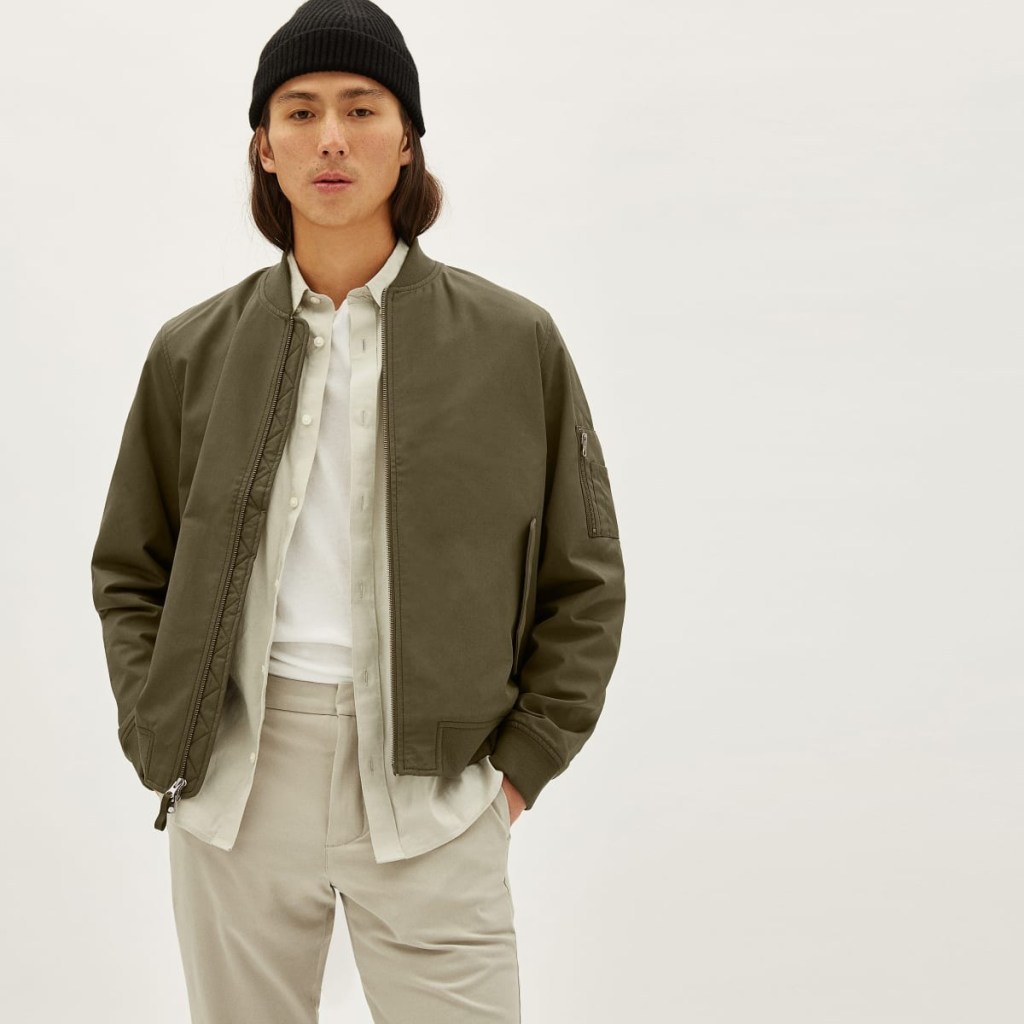 Topman took the decades-old style of the bomber and gave it a decidedly sleek and modern new look while staying faithful to the overall class and utility of the jacket. This is a sophisticated new look which, when paired with jeans and either boots or a classy pair of sneakers, is perfect for an urban setting. 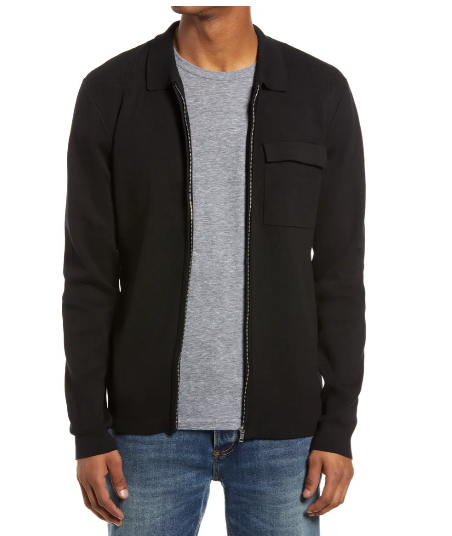 This bomber jacket ticks all the style boxes. It’s got a knitted collar and cuffs, two front slanted pockets and the classic silhouette. This is an easy wardrobe upgrade; this bomber looks way more expensive than its price tag. 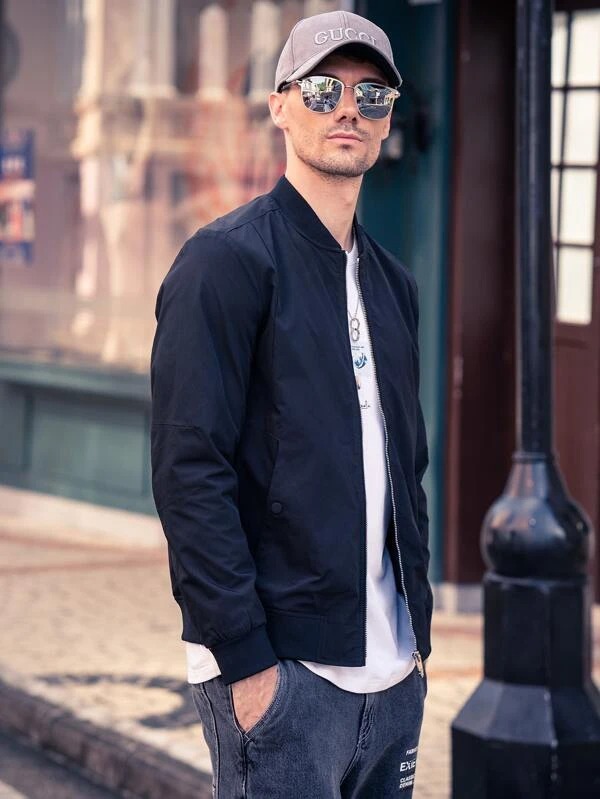 The MA-1 Bomber Jacket from Alpha Industries may just be the most popular bomber on the planet, and for good reason. Alpha Industries is like Levi’s, Jeep or Coca-Cola — an all-American brand. This company got its start producing flight jackets like the MA-1 for U.S. military jet pilots, and the modern iteration of this jacket hasn’t changed all that much. Perfect for street style and your favorite pair of jeans, this iconic Alpha Industries bomber jacket is available in loose and slim fits. You can also opt for the brand’s famous NASA MA-1 bombers, which instantly signal that you’re wearing the most iconic bomber jacket of all time. 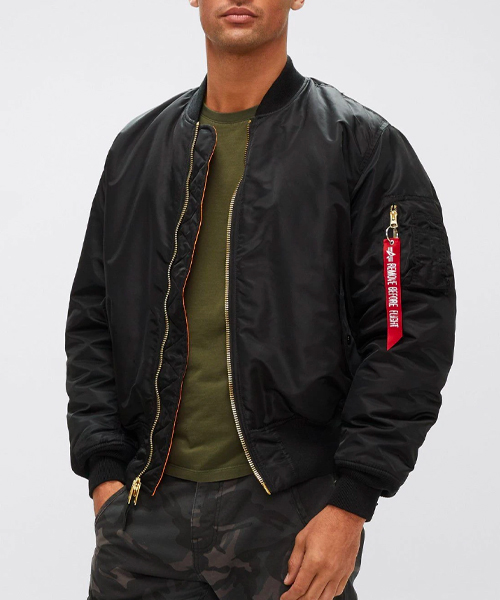 You know why people wear linen in the summer or wherever it’s brutally hot? The fabric is breathable, and you don’t end up looking like a sweaty mess when you wear it. Club Monaco’s light green linen bomber is minimally styled, letting you dress it up with chinos or down with shorts. Partially lined to keep its shape, this linen jacket is still light enough for a summer night, and can be worn during early fall too. 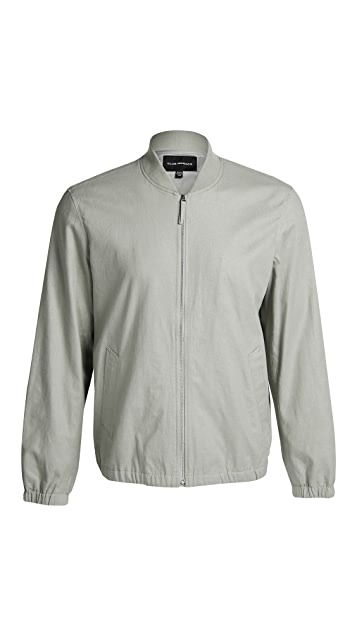 A basic black bomber from Calvin Klein is one of the most versatile jackets you can have in your closet. Wear it with dark-wash jeans and a light-blue oxford, and bring out some of the crazy designer sneakers you just bought for a little pop. Throw on olive chinos, a grey crew neck sweatshirt, some beat-up canvas sneakers and walk to the bar around the corner for some Sunday football. Wear it to the stadium for a soccer game! Wear it with white jeans in the spring! No matter how hard you try, you really can’t go wrong here. Calvin Klein always makes great-fitting clothes, and their outerwear has a standard fuller cut. The black polyester is tough, water-resistant, and will look nice and crisp for a long time to come. 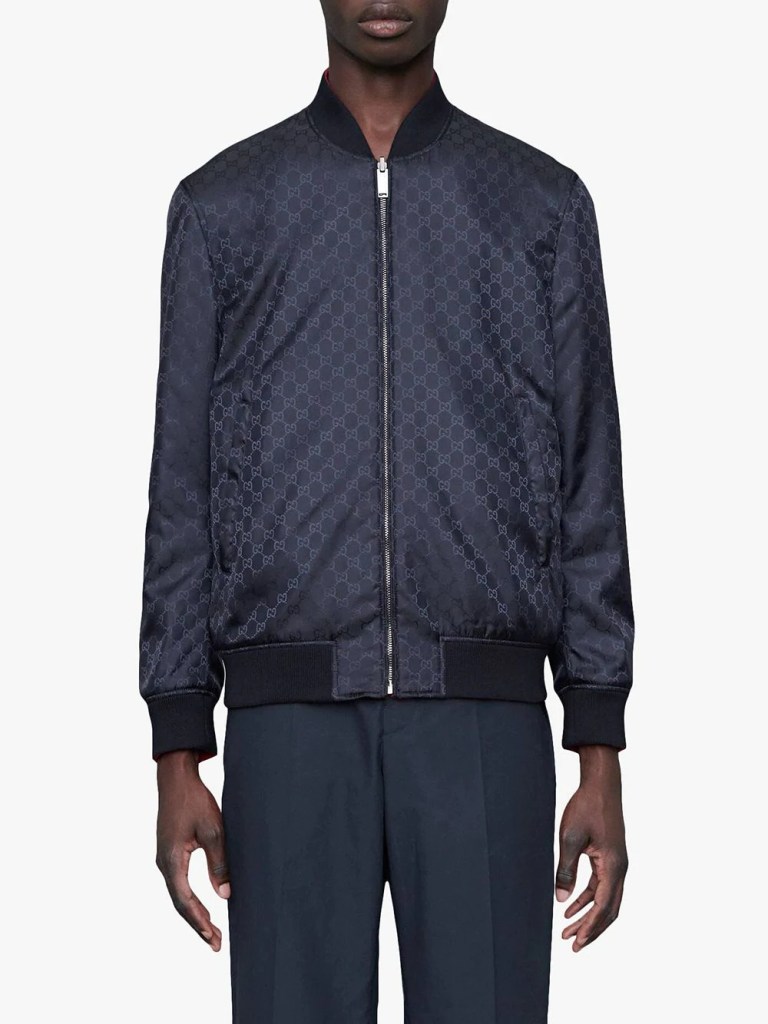 John Elliott’s all about chillin’, not sure if “relaxed,” or “comfy” is his middle name. His clothing is the type of stuff that you never want to take off. His bomber jacket is detailed with tonal herringbone tape for an extra dash of eye candy. 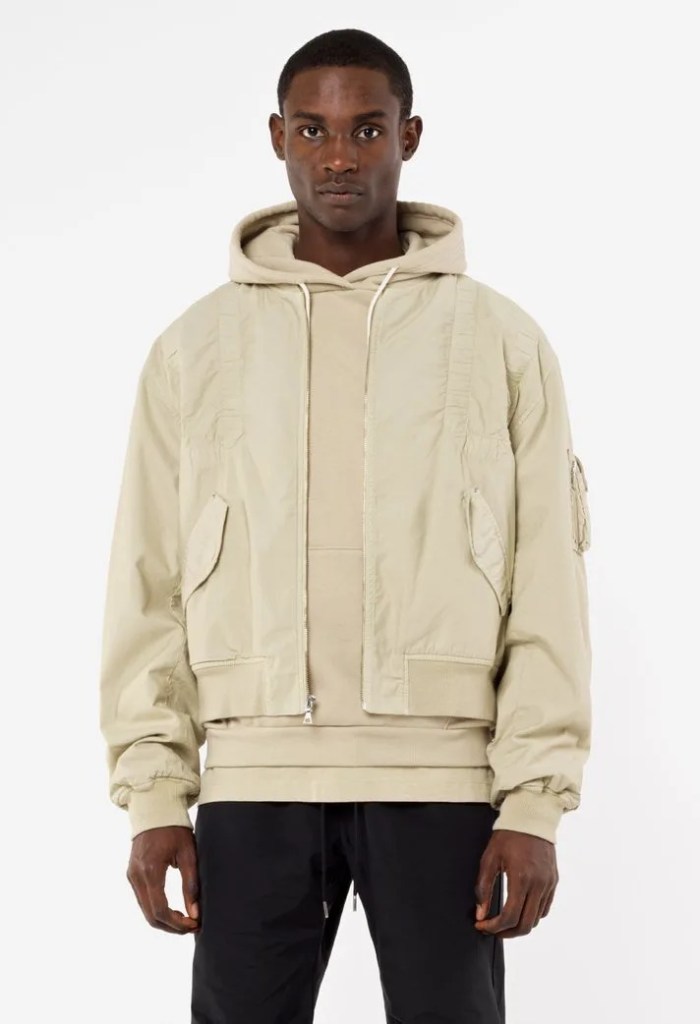 No need for a rain jacket, as this lightweight and soft-to-the-touch bomber is water-repellant. There are underarm vents to keep you feeling chill, and it comes in two colors. 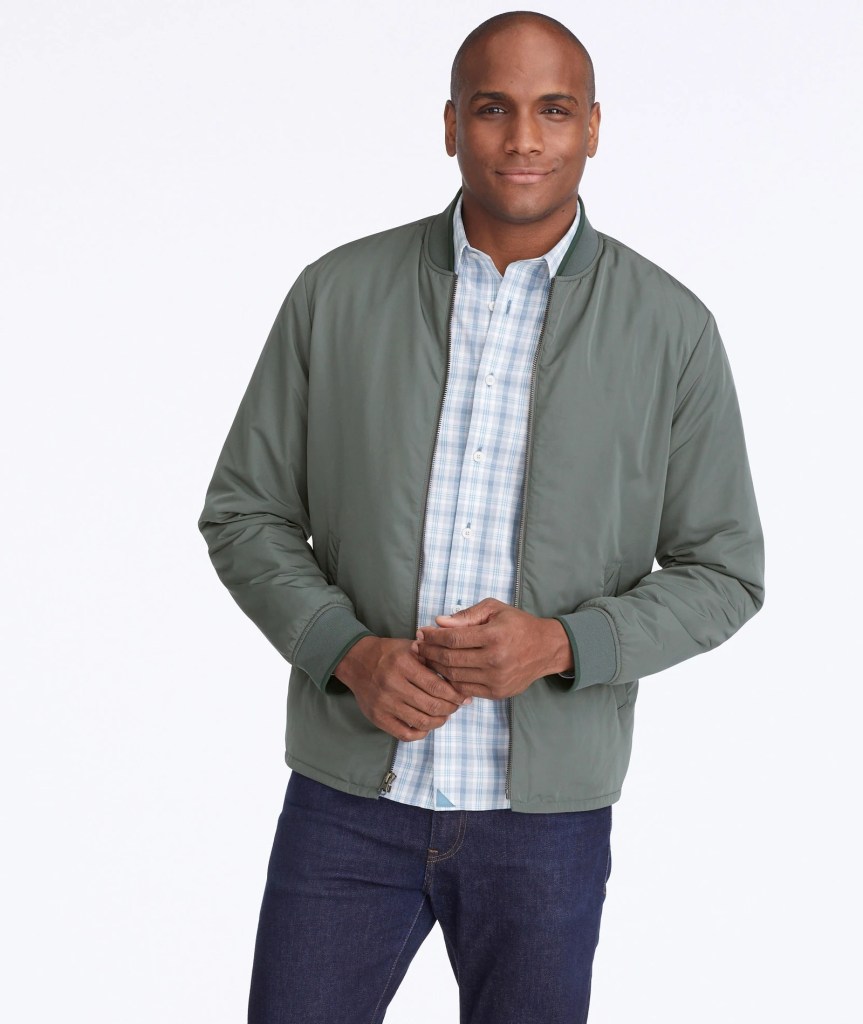 We have a love-hate relationship with H&M. We love them because their mix of style basics are reasonably priced and their on-trend stuff are equally priced well, but we hate them because when we walk into an H&M planning on only buying a couple of t-shirts, we end up with a shopping bag bulging with other things too. And we’re never sure exactly how that happens. This nylon bomber jacket falls neatly into something you need–a lightweight jacket for  summer and fall, and an on-trend item that you gotta, gotta own. It also comes in black and olive green. The striped ribbed cuffs and waist give it a whiff of baseball, and there’s an inner pocket that’ll hold important stuff. 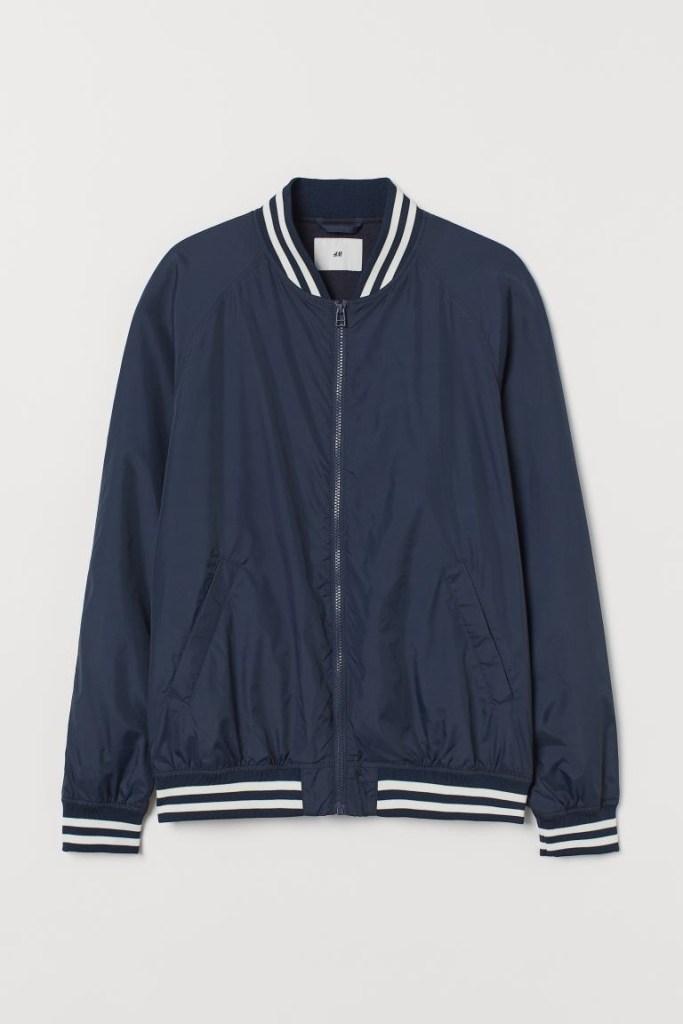 Two, yes, two eye-catching spicy styles in one. Stolen Girlfriends Club Scorpion Death Bomber Jacket’s got colors that reflect your mood. Feeling like a billion dollars? Wear the yellow satin side (this side zips up) that’s got a honkingly large black scorpion embroidered on the back. Feeling a little stealthy? Turn the jacket inside out and it’s all black and highlighted by snazzy silver snap buttons. It’s cut slightly on the bigger side so you can layer sweaters or hoodies when it gets cooler again. Toss on a pair of distressed jeans, graphic tee, a pair of combat boots or sneakers, and you’re good to go.

The bomber jacket has gone very sporty for 2021. Could it be that it’s because we’re slowly coming out of our homes and getting ready to explore the world again? Could it be we’ve all been struck with a sense of nostalgia and remember what it was like sitting in a ballpark under blue skies, eating lousy hot dogs and cheering our favorite teams? We’re not sure, but we do know that Pharell Williams and Nigo’s Billionaire Boys Club’s streetwear clothing and accessories have always been accessible yet luxe. In fact, you can now surround yourself with BBC stuff as they’re now making home décor stuff. Speaking of décor, you can decorate yourself (oh, what a really bad pun that was) with their two-tone bomber. 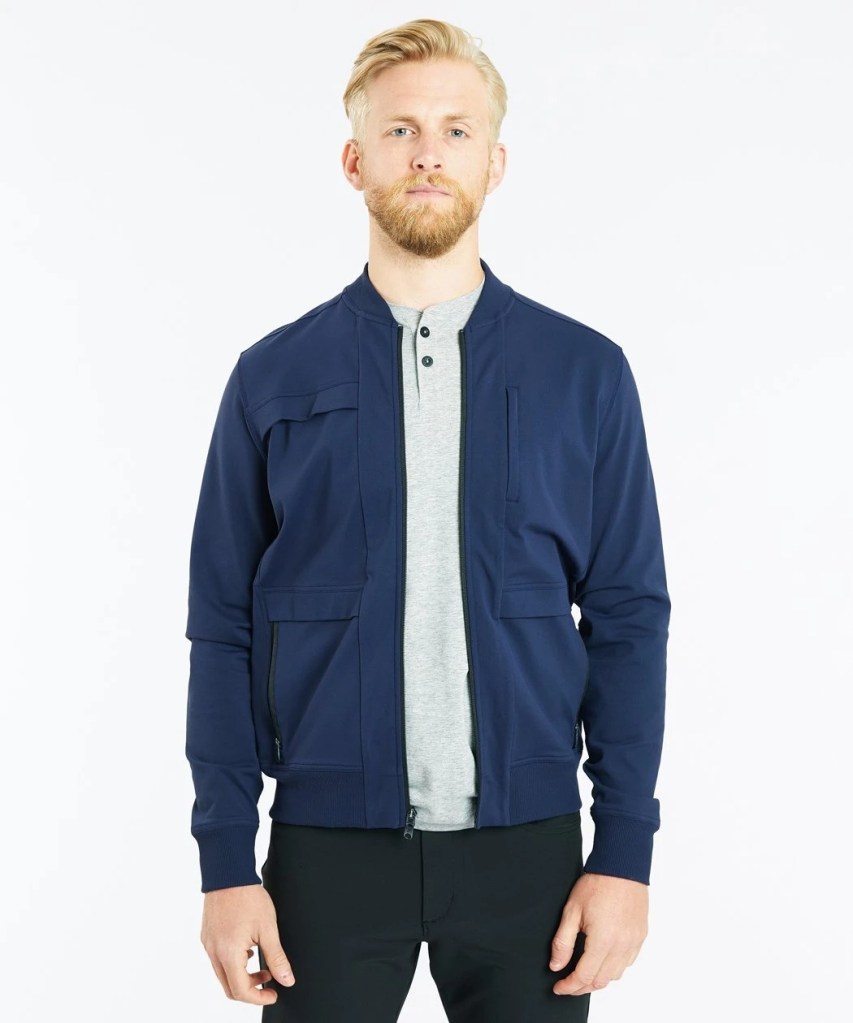 If you love the classic stylings of Alpha Industries but prefer a looser fit in your bomber jacket, then go with the brand’s popular L-2B Loose Bomber Jacket. It’s available in a range of colors, but we especially like the gunmetal gray and navy blue, the latter of which is pictured below. This water-resistant bomber has all the details you’d expect in an Alpha Industries bomber jacket: the Alpha Logo on the zipper extension, MA-1 utility pocket on the sleeve, and the brand’s signature “Remove Before Flight” tag. 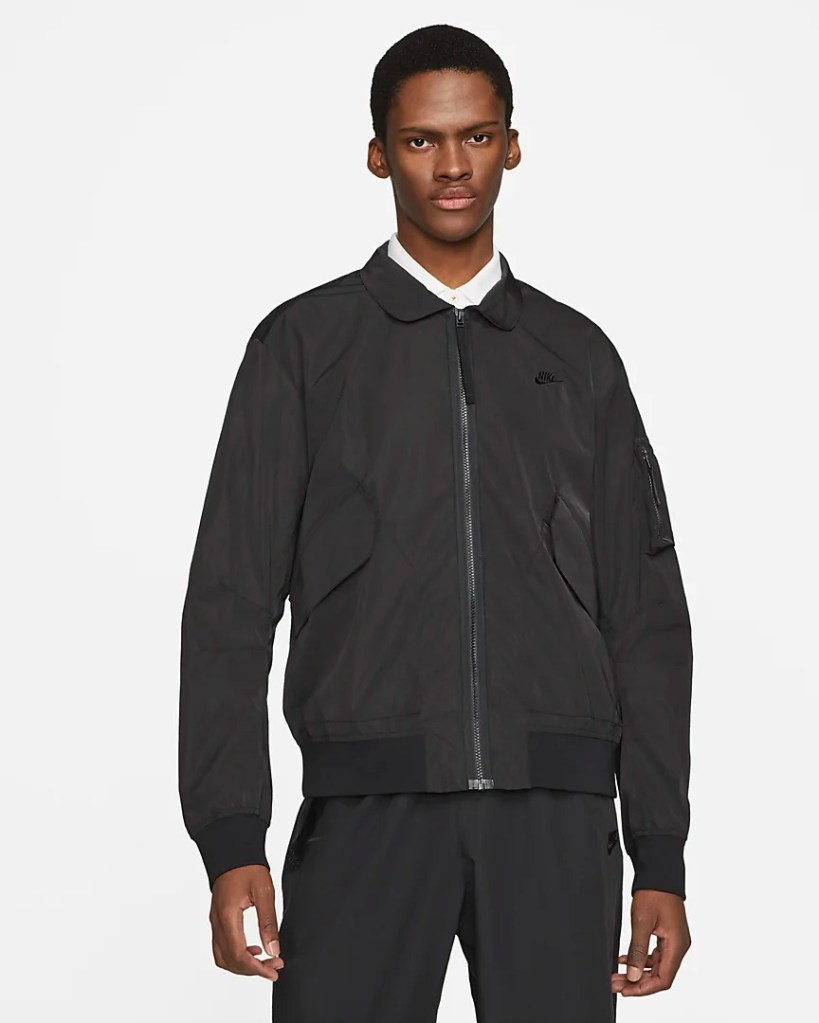