* Kanye West’s influence extends beyond music and into fashion, particularly sneakers
* His Yeezy collection may be sold out but these sneaker styles are still available
* Iconic silhouettes that have stood the test of time

Say what you want about Kanye West but you can’t deny the incredible influence he’s had on sneaker culture. 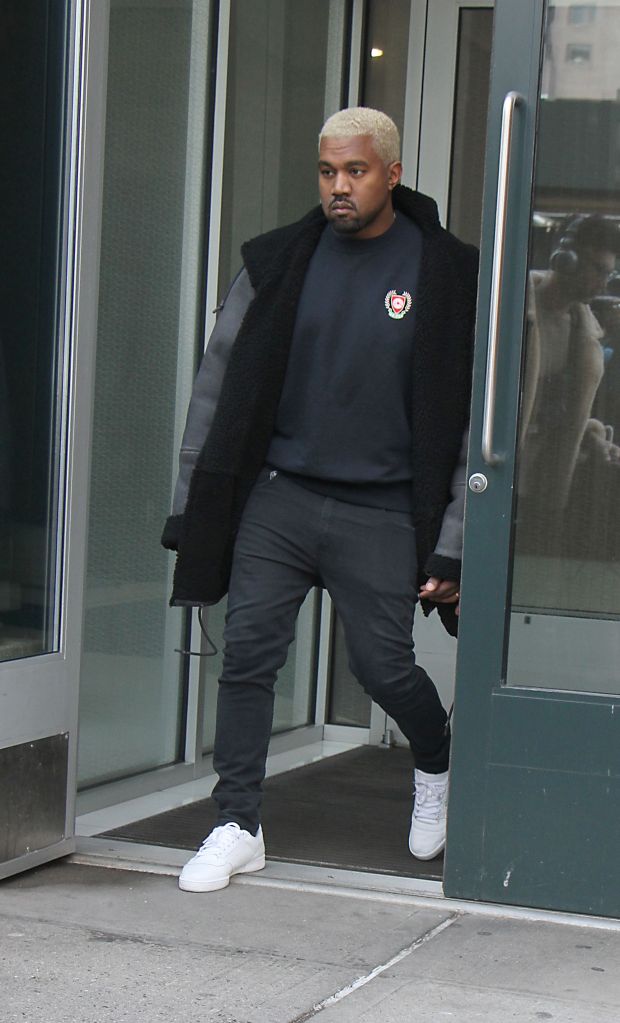 From his early collaborations with Adidas, to his full-fledged Yeezy line (which now includes boots and apparel, in addition to sneakers), Kanye always sets the tone for what we want to wear — especially on our feet.

While Kanye has said he draws inspiration from art and architecture, he’s also well-versed in the history of fashion and footwear, so we’d like to think he’s done his research on past sneaker trends as well.

To do our part, we surveyed our SPY team and rounded up ten of the best sneakers of all time, both in terms of style and impact on fashion and popular culture. Then we got LA-based illustrator Ben Matsuya to imagine Kanye in these looks, as they would have first been worn back in the day.

We should note that none of these sneakers are Kanye-approved, though we’d like to think he’s ready to put his stamp on these classic kicks — he’s just waiting for his paycheck.

Keds was founded in 1916, and the Champion was their first-ever release, quickly becoming a success with both men and women alike. It was as much a staple for kids and students (who liked its preppy style) as it was for men and women who wore it on vacation and to the office.

The signature Champion Keds style has carried the blue label for over 100 years and has been re-engineered with subtle changes over the years. Still, the original details remain: a classic canvas upper, a 4 eyelet lace-up front, and white stitching. 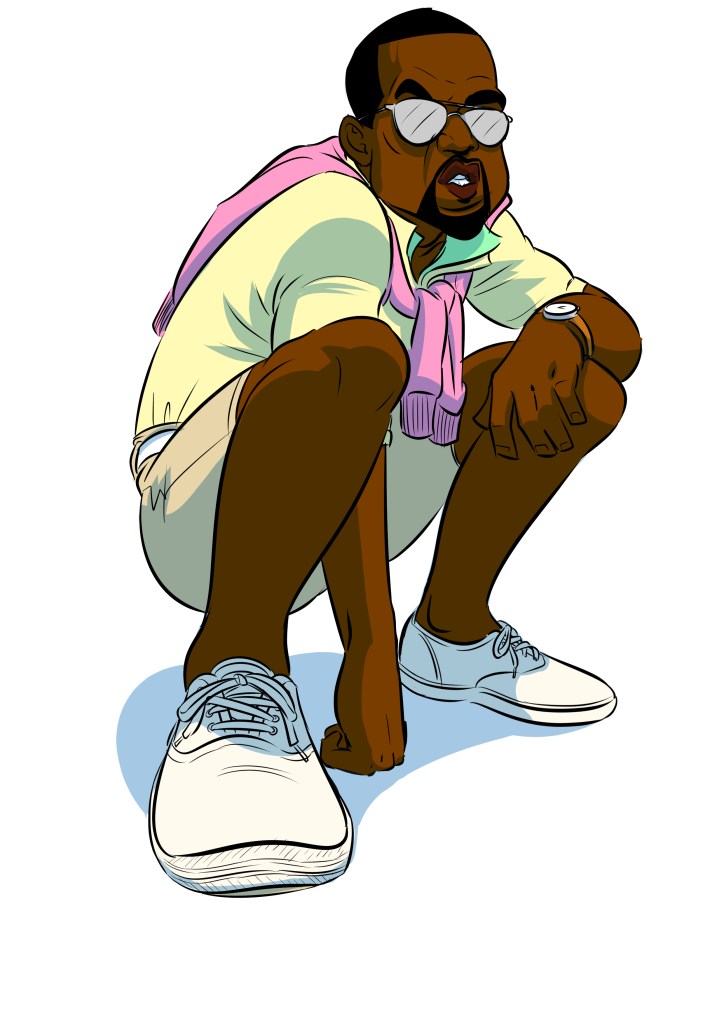 Would Kanye wear these? It might be too “simple” for his tastes, so we’re not sure he’d be sporting the Champions today. Another reason why he probably wouldn’t wear these: Keds released a new campaign and collection three years ago with Kanye’s arch-rival, Taylor Swift.

Created in 1917, the first iteration of these now-iconic sneakers was dubbed the “Non-Skids,” thanks to their rubber sole and flexible canvas upper. The shoe was designed for basketball, and it got its eponymous name from Charles “Chuck” Taylor, an amateur b-ball player who eventually started hosting basketball clinics for the Converse company. According to reports, it was Taylor’s idea to add a patch to the side of the shoe, to protect his ankle. By 1932, Taylor’s name and the All-Star logo were added to the patch, and the shoe became the “Chuck Taylor All-Stars” (though also commonly referred to as just “Chucks”). 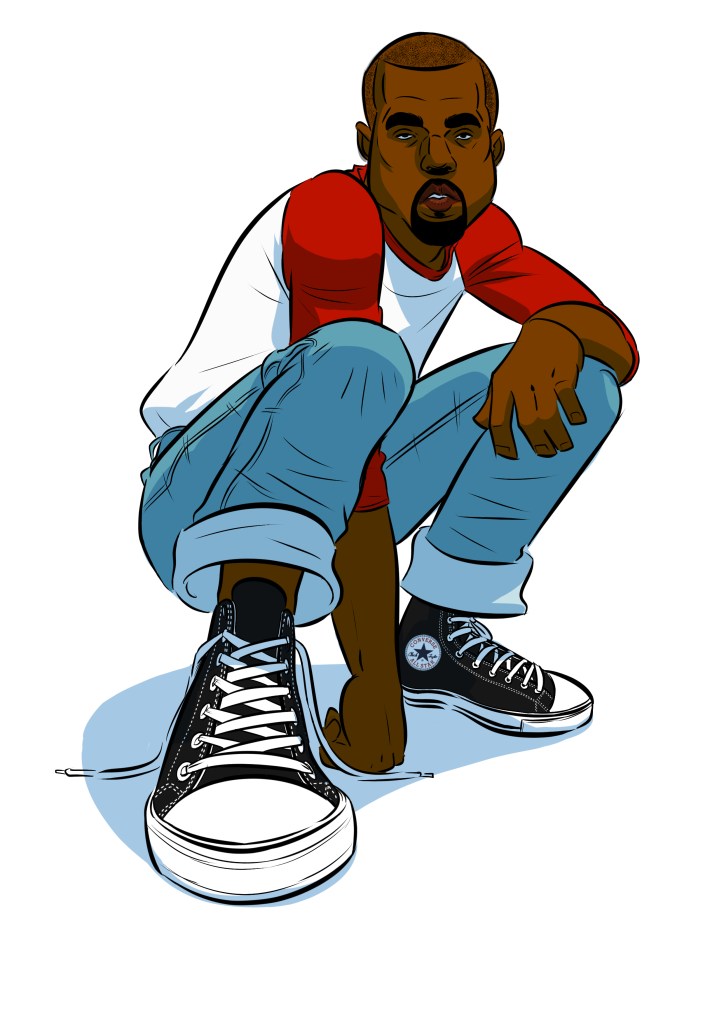 The Converse sneaker is now one of the best-selling sneakers of all time, and comes in hundreds of colors, sizes and material options. The sneaker has been re-imagined by everyone from musicians to athletes to Hollywood celebrities. You can even customize your own Chuck Taylors now on the Converse website.

First introduced in 1949, PRO-Keds started off as a basketball shoe worn by George Mikan, basketball’s original Big Man, who played for the Minneapolis Lakers, the first-ever NBA champions.  Originally released as the “Royal Tread,” the first PRO-Keds product was the “Classic Royal,” a canvas basketball high-top featuring a distinctive red and blue power stripe adjacent on the sole. The shoe continued to be popular among both athletes and the style set throughout the 50s and 60s, worn with everything from basketball shorts to preppy varsity sweaters and slacks. 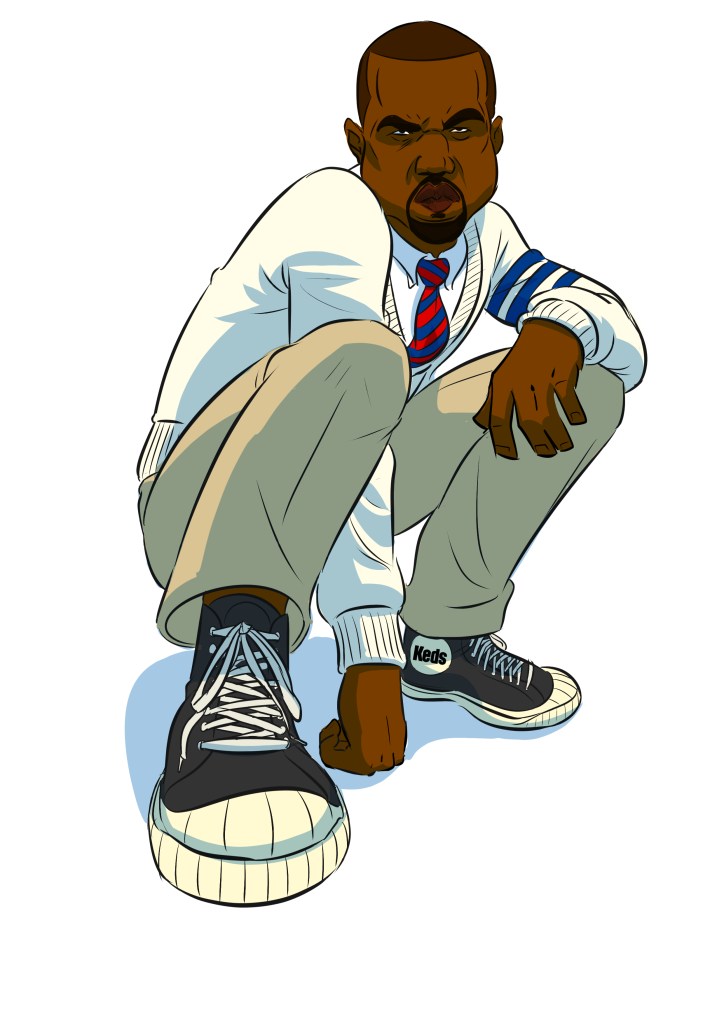 The PRO-Keds Royal was recently remastered with a gum rubber outsole and a molded and cushioned, open cell, foam footbed, to provide added arch support, though the rest of the silhouette remains relatively unchanged.

Long before Rihanna’s Fenty Puma Creeper was named “Shoe Of The Year,” men were rocking the elevated silhouette through the streets of Europe and America. Notable for its chunky crepe soles (often with suede uppers) and its all-black styling, the Creeper became synonymous with the rock and roll culture of the 60s, through to the punk heyday of the 1970s. Perhaps because it looked so different from a traditional athletic sneaker, the shoe became a symbol of counterculture and anarchy, and was often seen paired with ripped jeans and beat up leather for a rebellious, anti-establishment look. 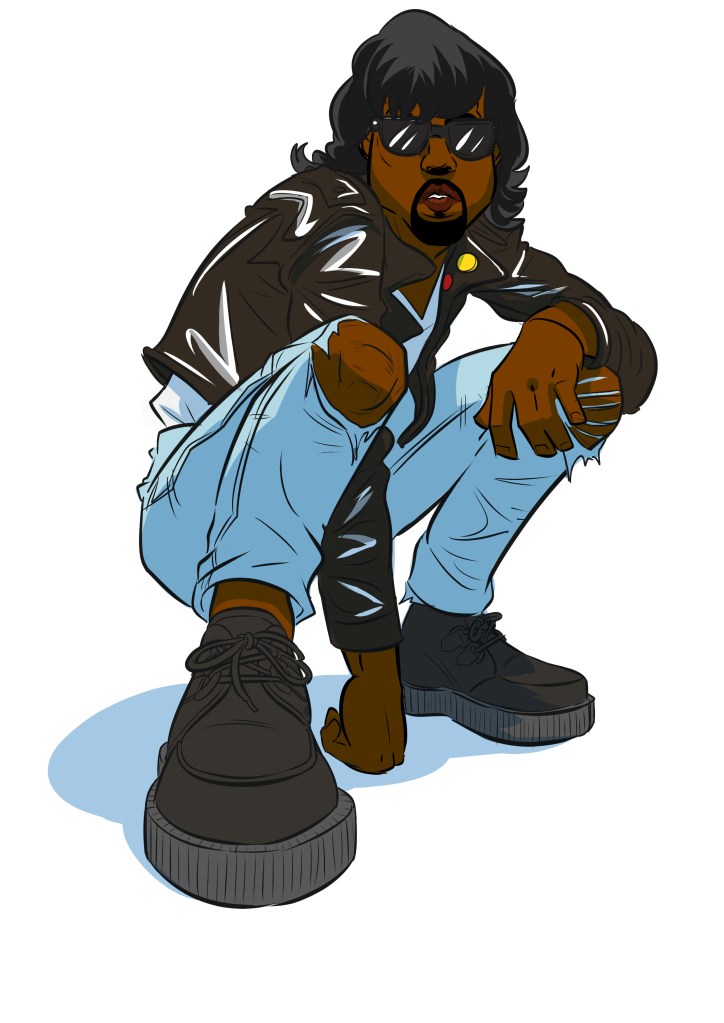 These days, the shoe is decidedly more mainstream and — dare we say — even office appropriate, with a more streamlined silhouette and high-end materials contributing to its modern revival. Unless you’re into thrifting for vintage Creepers, we suggest grabbing these ones from PUMA to get the look.

Debuting in 1972, the Cortez was one of the first track shoes created by Nike and immediately found favor with runners around the world thanks to its lightweight construction and supportive design. Designed by Nike co-founder and legendary coach, Bill Bowerman, the Cortez quickly became a streetwear icon as well, after Farrah Fawcett was photographed skateboarding in the Nike Cortez while on the the set of Charlie’s Angels . 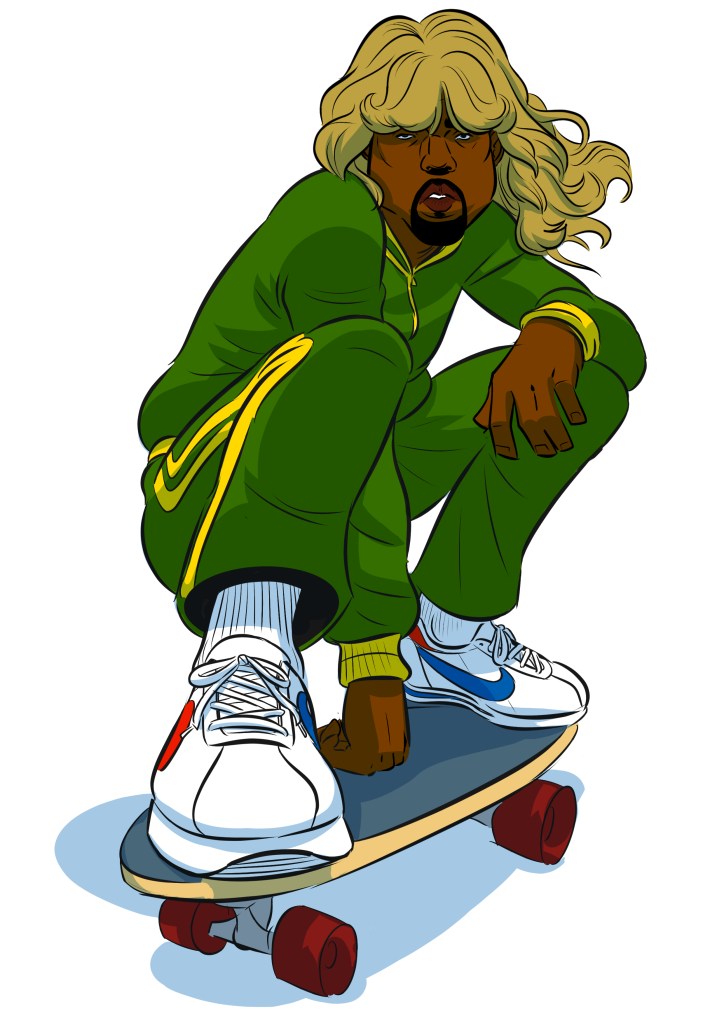 Just last year, Nike tapped model Bella Hadid to re-create the famous photo in an ad campaign celebrating the Cortez’s 45th anniversary. The Cortez by the way, was also the sneaker of choice worn by Tom Hanks in the 1994 film, Forrest Gump .

The original skate-shoe company, Vans brought California’s skateboard subculture into fashion’s mainstream in the 70s and the Old Skool sneaker was a big part of it. The iconic slip-on was an instant favorite among riders drawn to its sticky soles, padded tongue and signature waffle outsole. The Old Skool is also the first Vans sneaker to bare the iconic side stripe, and, unlike its slip-on siblings, features a lace-up silhouette. 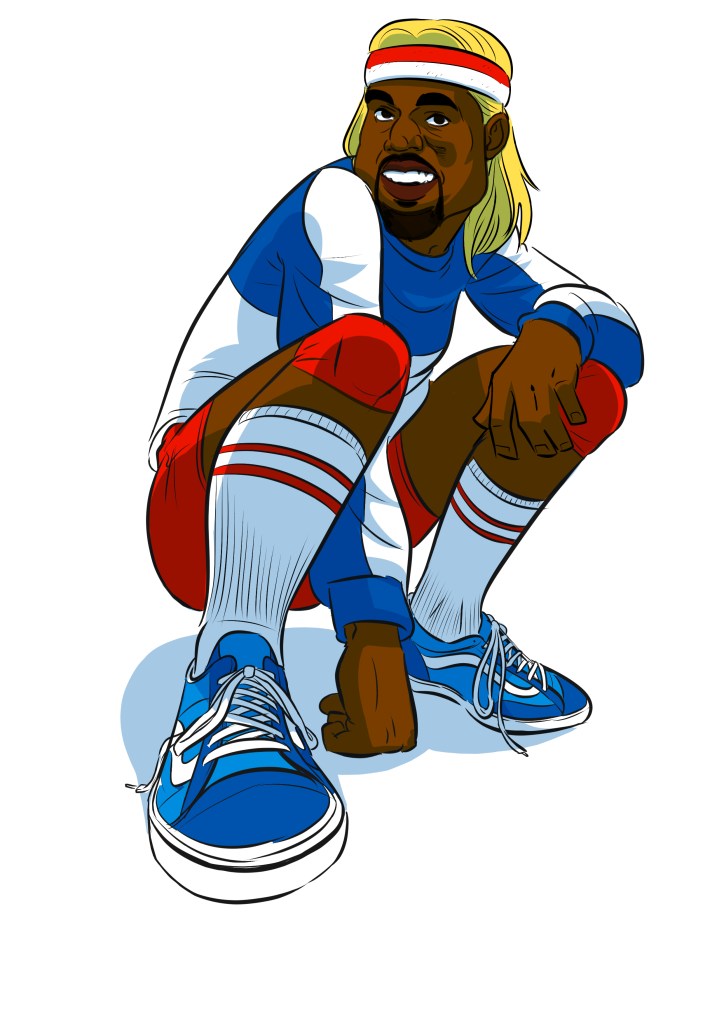 Along with the Vans SK8-Hi, you couldn’t go anywhere in California without seeing Vans in the 70s and 80s, most notably with surfers and skateboarders in Venice Beach.

Today, the shoe is still a best-seller, and the latest version features a slightly slimmed-down silhouette and enhanced details, like fresh colors and prints, and a padded footbed for better shock absorption. Though you still see it on the streets and skate parks of LA, the Old Skool is now worn as easily with a suit as it is on a board, proving that a classic pair of shoes never really goes out of style.

Nike has no shortage of iconic sneakers, but one of its “greatest hits” was the Nike Mag. The futuristic sneaker with the automated lacing was first seen on Michael J. Fox’s character Marty McFly, in the 1989 movie, Back to the Future II and became an overnight phenomenon, with fans clamoring to know whether the lace-up technology could actually be replicated in real life. The answer: yes, and no.

Nike actually released the shoe in 2016 to the general public, though it only made 100 pairs available. The only way to get them was to enter a draw, with proceeds benefiting the Michael J. Fox Foundation. And if you thought the winners of the draw would be proudly wearing the sneakers, think again: Footwear News reports that many of them put the limited-edition shoe on sale, with one pair fetching more than $52,000. 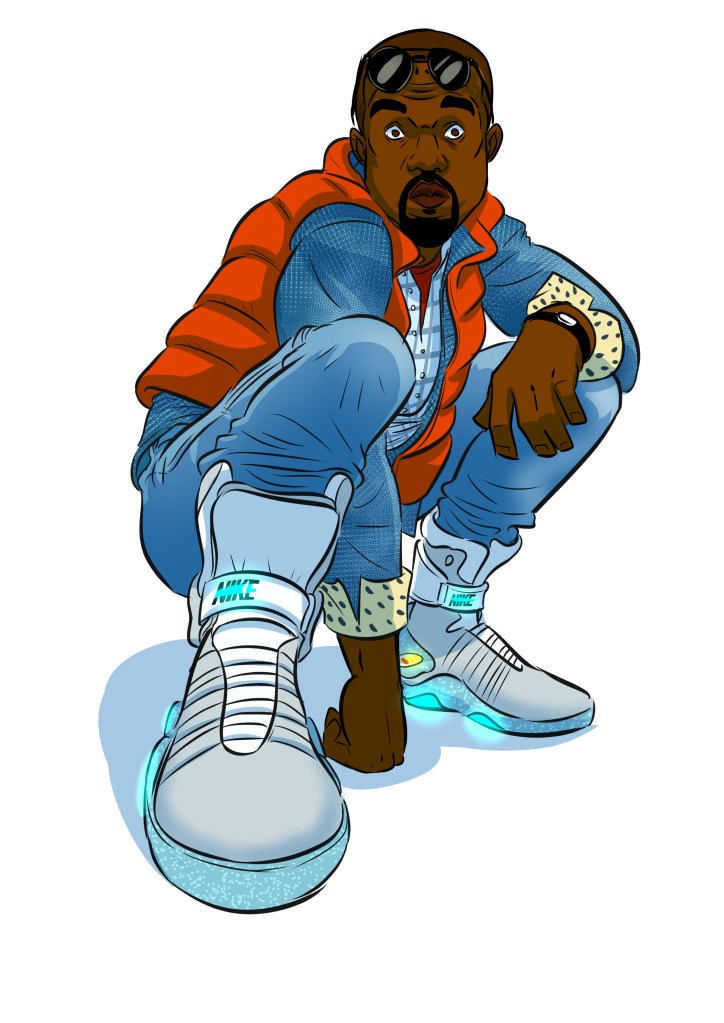 You can still test your luck and try to find the Air Mags on eBay. Or you could just grab a pair of Nike Air Max Sneakers instead. The Air Max is still one of Nike’s best-selling styles, and, at just $150, you could afford to grab a couple pairs without even coming close to what you’d have to shell out for the Air Mags.

A true OG on the courts — and on the streets — the Adidas Gazelles were first released in 1966 as a training shoe for athletes in Germany. It was actually one of the first pairs of Adidas shoes that used suede, thanks to its lighter weight, compared to leather. The thick rubber sole also provided a solid grip on the ground.

The current version of the Gazelle is actually an update of the 1991 model, with the same materials, colors, textures and proportions as the original, while adding a heel tab. 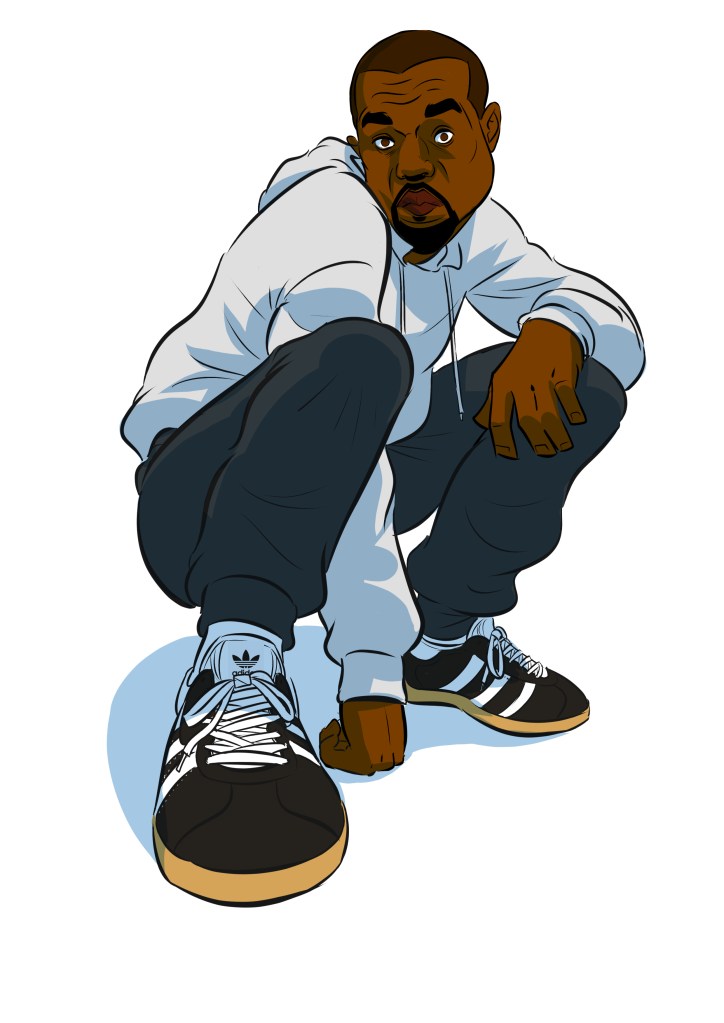 With its retro-inspired styling, low profile and the signature Adidas three stripes, the Gazelle continues to be a fan favorite, four decades in and counting. Along with its Stan Smith sneakers (which are considered more of a court shoe), Adidas has the street style game on lock, perfectly mixing preppy with performance, and vintage vibes with fresh perspectives.

The 90s brought us a lot of memorable fashion trends, but when it came to sneakers, you were either a Nike guy or a Reebok guy. Our pick: the Reebok Pumps. First released in 1989, the Pumps entered the sneaker arena to immediate “oohs” and “ahhs,” thanks to its internal inflation mechanism that allowed you to tighten and loosen your shoes by simply pressing on a quarter-sized “pump” on the tongue. It got a further boost in 1991, when Dee Brown famously pumped up his shoes before soaring to victory in the NBA Dunk Contest.

While Michael Jordan had his own Nike line, many other famous athletes of the 90s wore Reebok Pumps, including Michael Chang, Dominique Wilkins and even Shaquille O’Neal. The design of the pump would be changed depending on the sport: Chang’s “Court Victory Pumps” were modeled after a tennis ball, while the “Shaq Attaq” pumps came in black and blue — mirroring the colors of Shaq’s basketball team, the Orlando Magic. 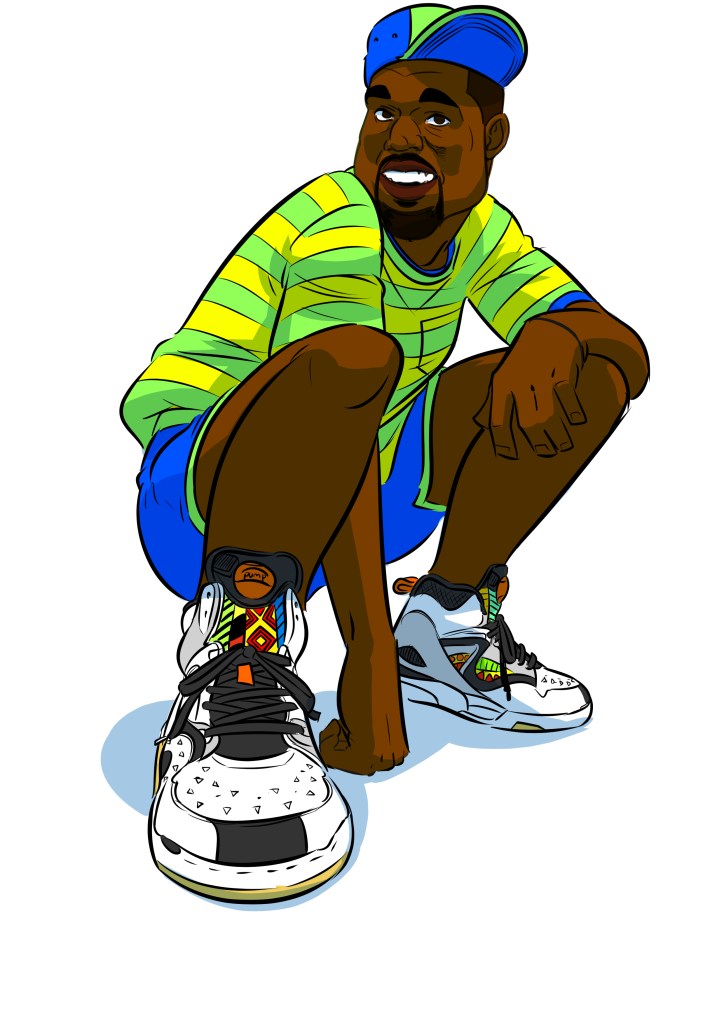 While Reebok Pumps fell off in later years, the demand for nostalgia has spurred a renewed interest in the shoe. Reebok unveiled its “Pump Supreme” model last year as a unisex shoe for running. A seamless textile upper replaces the leather construction, though the Pump technology is intact, allowing the shoes to inflate for a custom fit.

Is it a sock? Is it a shoe? Balenciaga elevates performance athletic footwear with this modern, minimalist style that we wouldn’t be surprised to see Kanye wearing (paired with his signature oversized garments, no doubt).

Balenciaga is a big name in the high fashion world and these Italian-made sneakers push the boundaries of sneaker style with a streamlined knit high-top set on an oversized sole for a sporty, forward-looking profile. 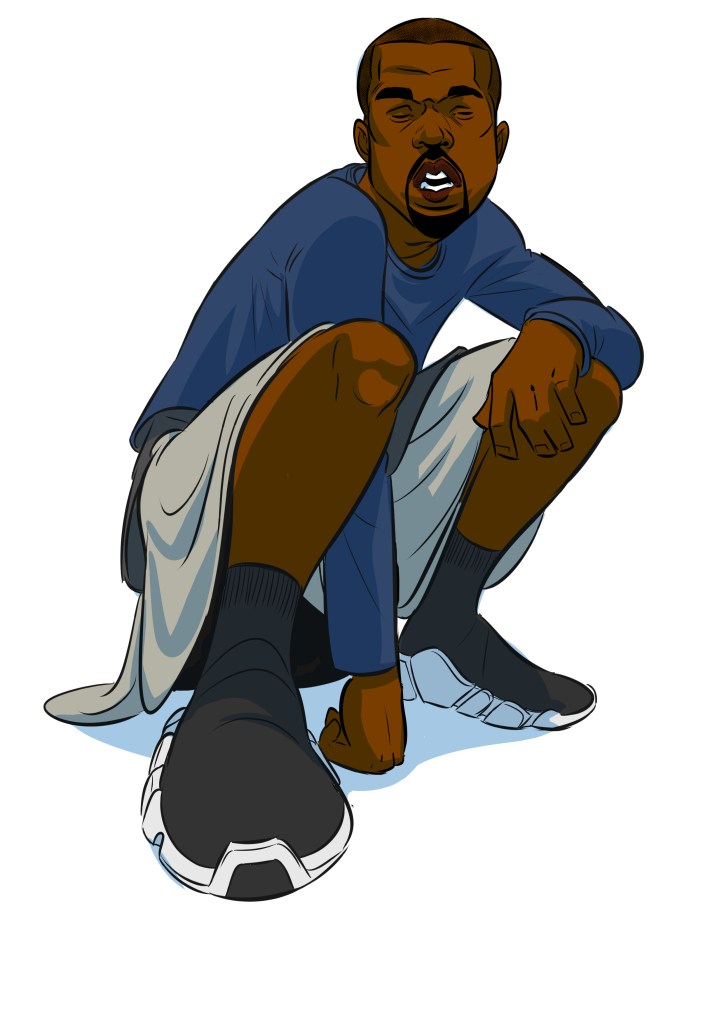 All images by Ben Matsuya

These high-top stretch knit sneakers aren’t for everyone – but maybe that’s the point. No matter your tastes or style, the great thing about sneakers is that they’re meant to be personal. Once you find the pair you like, you wear them out, break them in, take them on your adventures and then take them back home.

A good pair of sneakers will literally support you through your daily journeys, and, at the end of the day, whether you’re Kanye or just Joe Schmoe, isn’t that all we really want?

The Ultimate SPY Guide to Sneakers