The sock sneaker trend has taken the fashion world by storm recently, with nearly every major brand offering a take on the futuristic kicks. Now, another (and slightly unexpected) brand has thrown their hat in the ring: Lacoste. 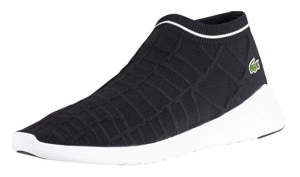 Lacoste is known for their bright, preppy classics, so a hyper-modern sock sneaker comes as somewhat of a surprise. The sock sneaker trend was started by athletic brands (mainly Adidas), and the kicks were engineered for training. But then cool kids started rocking the minimal sneakers, and designers like Balenciaga produced grail-worthy versions of their own.

With this shoe, Lacoste has managed to create a sock sneaker that’s decidedly by Lacoste with the crocodile logo on the heel and a special knit that’s reminiscent of reptile scales. It’s a bold move for a brand that’s famous for polos, but we think they did a great job.

We like the kicks because they’re not Adidas Primeknits or Balenciaga Speed Trainers, so you won’t see them on every street corner in major cities. They have a unique look, but they’re still subtle enough to wear with a range of streetwear like jeans, joggers, and shorts (once the weather warms up). Plus, at just over $100, they’re quite a bit cheaper than most other best-selling sock sneakers on the market.