When discussing the best terry polos, the discussion invariably leads to Sean Connery as James Bond sporting a baby blue terry romper (!) in “Goldfinger.” Yes, even though he wore a playsuit, any article about terry polos always mentions that outfit. Yet, they never talk about Bond wearing a tan terry short sleeve shirt in “Diamonds Are Forever.”

One of the allures of the terry polo shirt is its texture. Crafted from toweling fabric, those thirsty loops wick away moisture from your body and the plushness of the material is eye candy and feels so good against the skin. The best terry polos are a stylish addition to your summer and pre-fall collection of stuff. If you’re athletic, they can be worn when playing golf, tennis, croquet, badminton and anything that you do on a lawn or a court. Not athletic? You can wear them at the pub, puttering around your neighborhood and at the office.

Polo shirts are a fashion workhorse; they can be worn almost anywhere. For example, toss on a blazer for either a work presentation, casual wedding or one of those restos where they make you wear a blazer to get inside. Polo shirts can be worn with shorts and flip-flops, with chinos or jeans for work or play, wear them under a crewneck or cardigan … you get the idea. The best terry polos can step in and do what the polo shirt does, but its got that cool eye appeal that the polo doesn’t have.

We’ve rounded up 12 of the very best terry polos for you to wear now and through fall.

Amsterdam-based Scotch & Soda is known for creating pieces that showcase a modern, effortless style; clothing that once tossed on immediately enhances the wearer. This slightly oversized terry polo shirt in pink and black ticks all the boxes you want in a late summer shirt. Best of all, it’s now on sale. 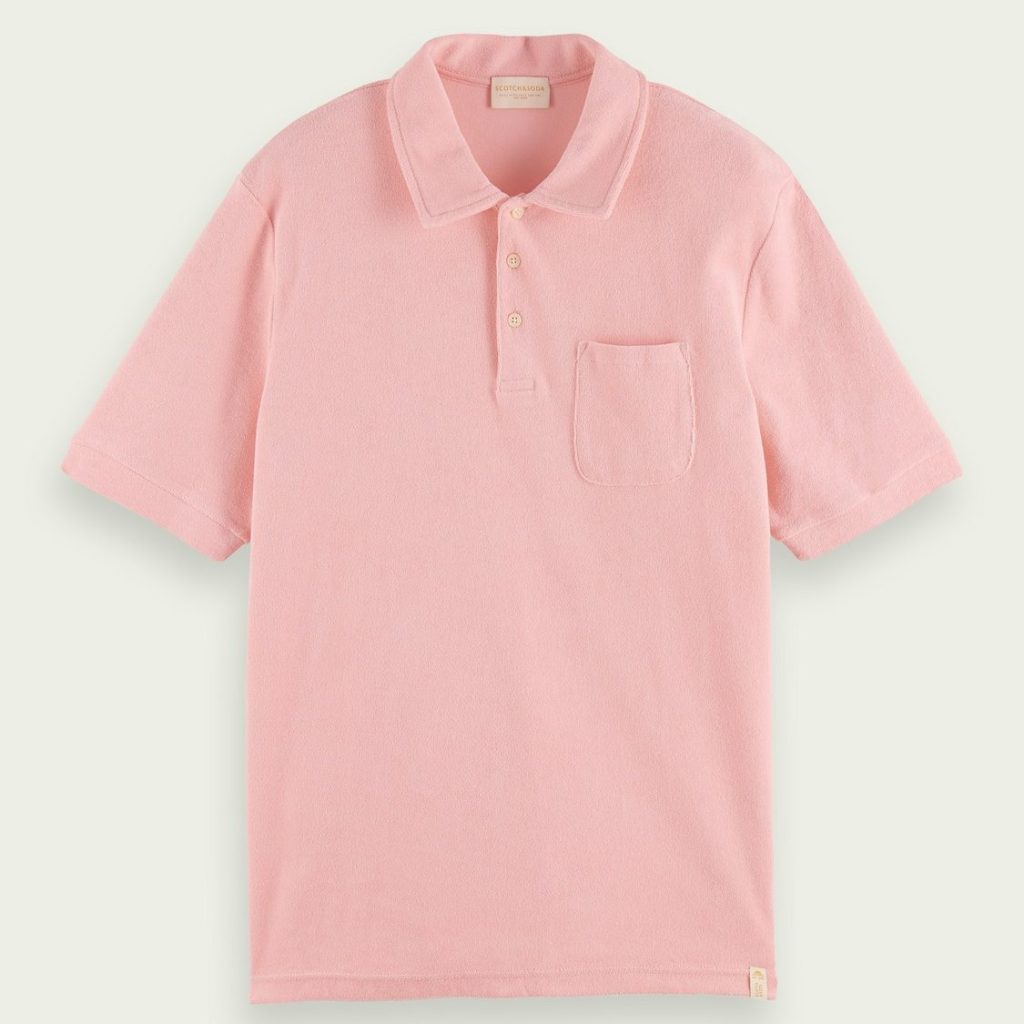 Made with organic cotton and recycled polyester, Outerknown is a company that is known for prioritizing style and green materials. They’ve created one of the best terry polo shirts around that’s eco-friendly and stylish. This shirt has a classic fit with one chest pocket which is great for stowing golf tees or what have you. It also comes in three other colors. 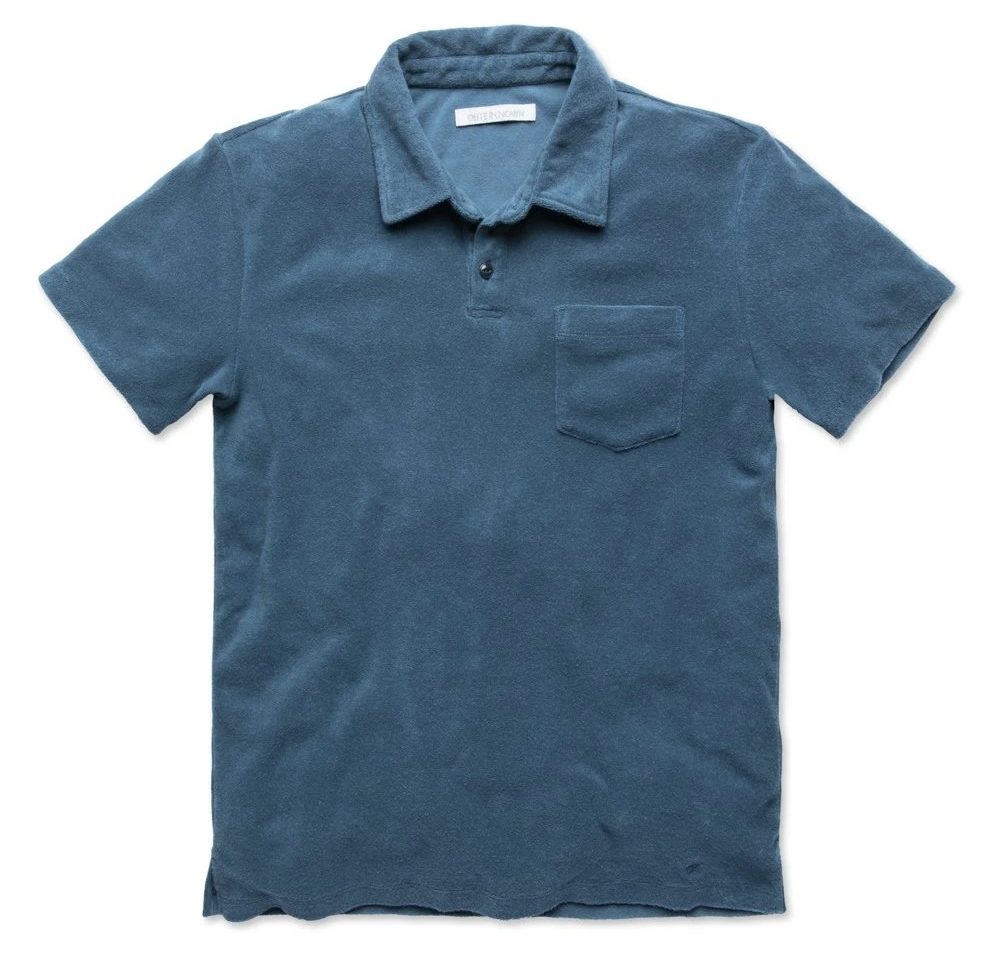 Tom Ford’s slim-fit terry polo shirt has to be one of the hottest and best terry polo shirts of the season, as it’s sold out on other places. Mr Porter has the last of them, and if you love this designer, the price point on this lilac terry polo shirt with contrast fabric trim is fantastic. 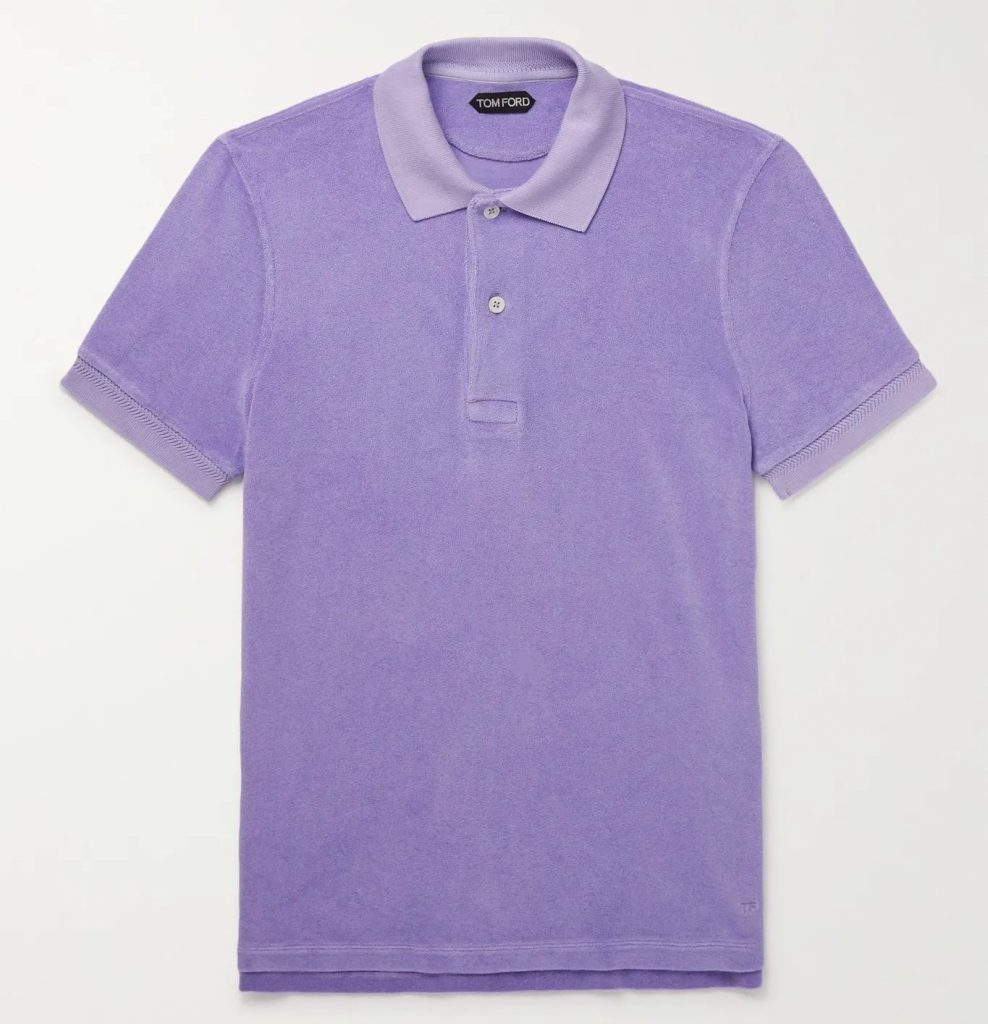 BEST ON AND OFF THE COURT

Ah, Adidas. What can you say about a performance wear and gear company that is offering exceptional pieces both on the court and off, except, well played, Adidas, well played? Their stripey terry polo shirt works best wherever you want to wear it, at the pub, on the links or on the court. This is an all-arounder that’s one of the best terry polos around. 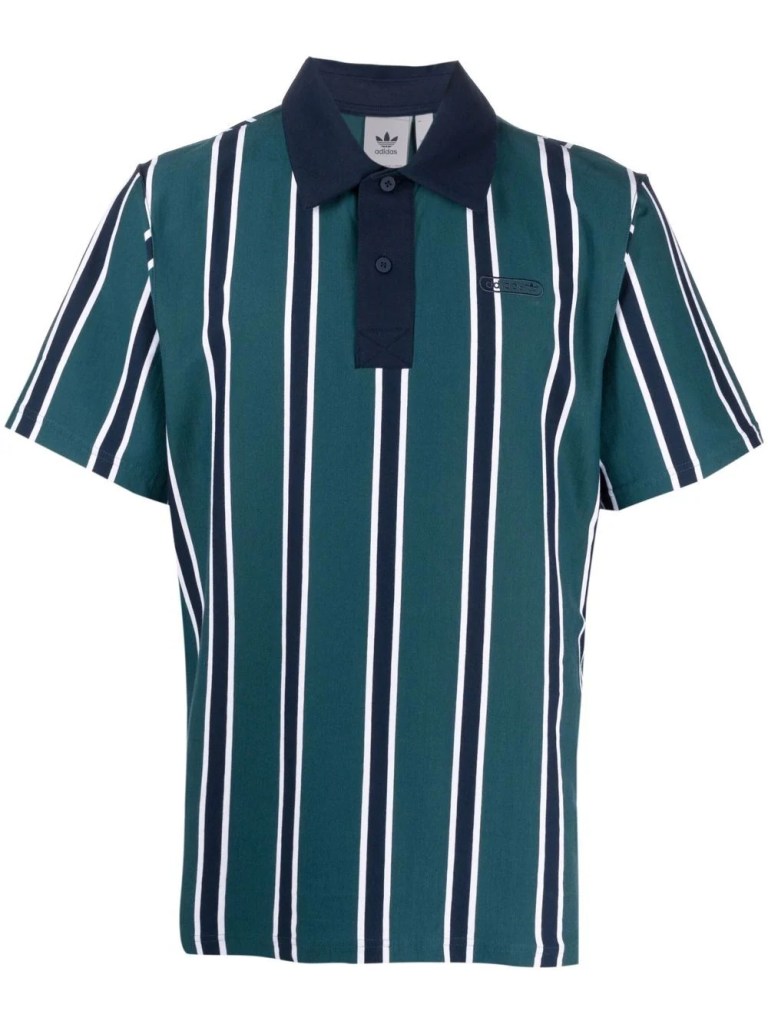 Vilebrequin has been aligned with athletes and fashiony people for years. Back in 2011, NHL and NFL players modeled their sportswear at an event in Palm Beach. They offer a variety of terry polos, but their blue-on-blue jacquard print one is really eye-catching and striking. The jacquard print has “50” woven into it as a nod to their now 50 years in business. The collared polo has a buttonless neck for that extra air of insouciance. It also comes in three other colors. 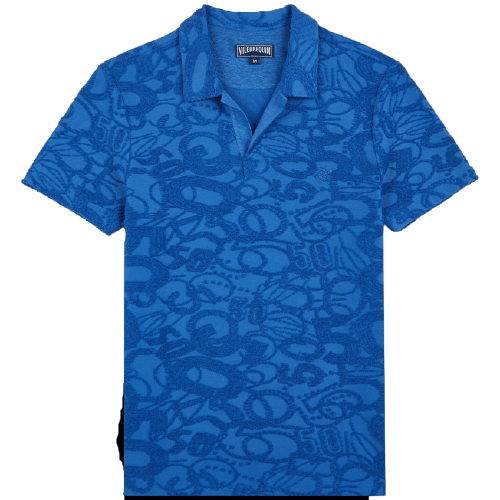 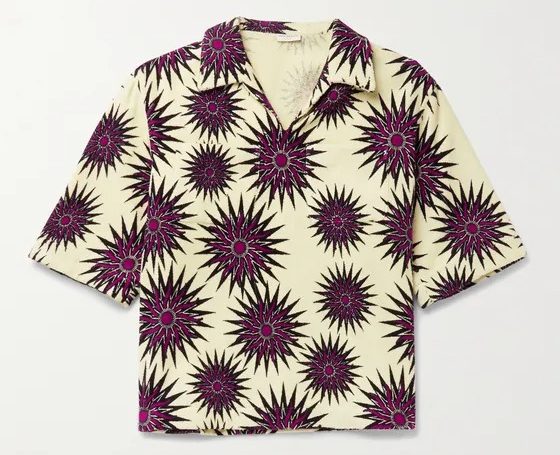 Don’t think of a white shirt as basic, think of it as the base for dozens of outfits. The neutral color of this terry polo lends itself to look amazing when worn with a bright hue, a dark hue and can make prints pop. Eton’s terry polo has an open collar (no buttons), is made from 100% cotton and has a slim fit. 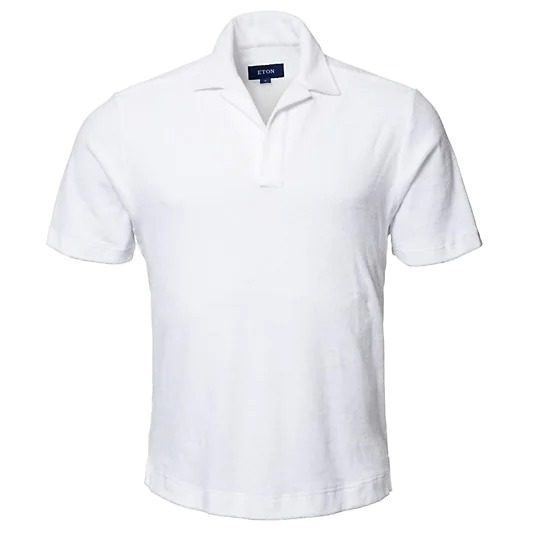 MOST LIKELY TO BE FOUND WITH A RACKET

Reminiscent of 70s tennis togs, this terry polo wouldn’t have looked out of place if tennis great Jimmy Connor wore it at Wimbledon. Made with a touch of stretch, it has an open collar and side split seams. 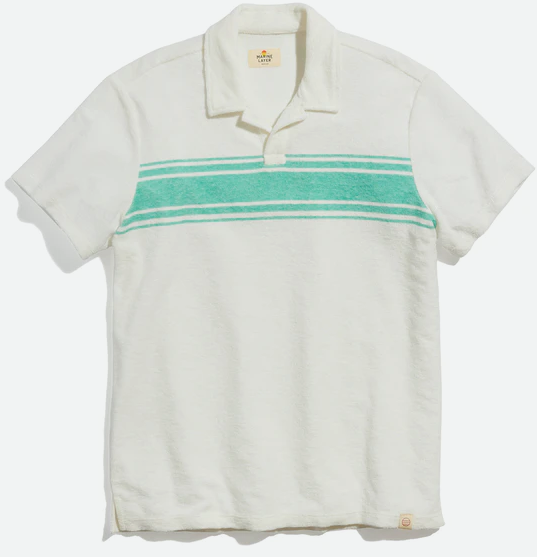 BEST FOR NOW AND PRE-FALL

Like the white terry polo shirt, solid black terry polos are the best terry polos for summer and early fall as they’ll go with everything you own. This is a midweight terry that has a regular cut. 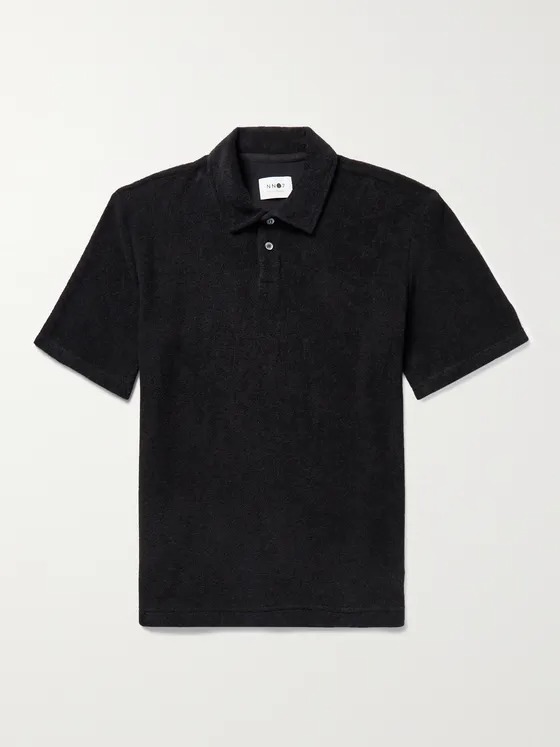 When someone says the word, “polo,” one brand comes to mind. By the 80s, Ralph Lauren’s polos were everywhere as the “hot item” of summer. When it comes to iconic summer fashion styles, Polo Ralph Lauren polo shirts are up there. So, it makes perfect sense for them to come out with a soft terry version. 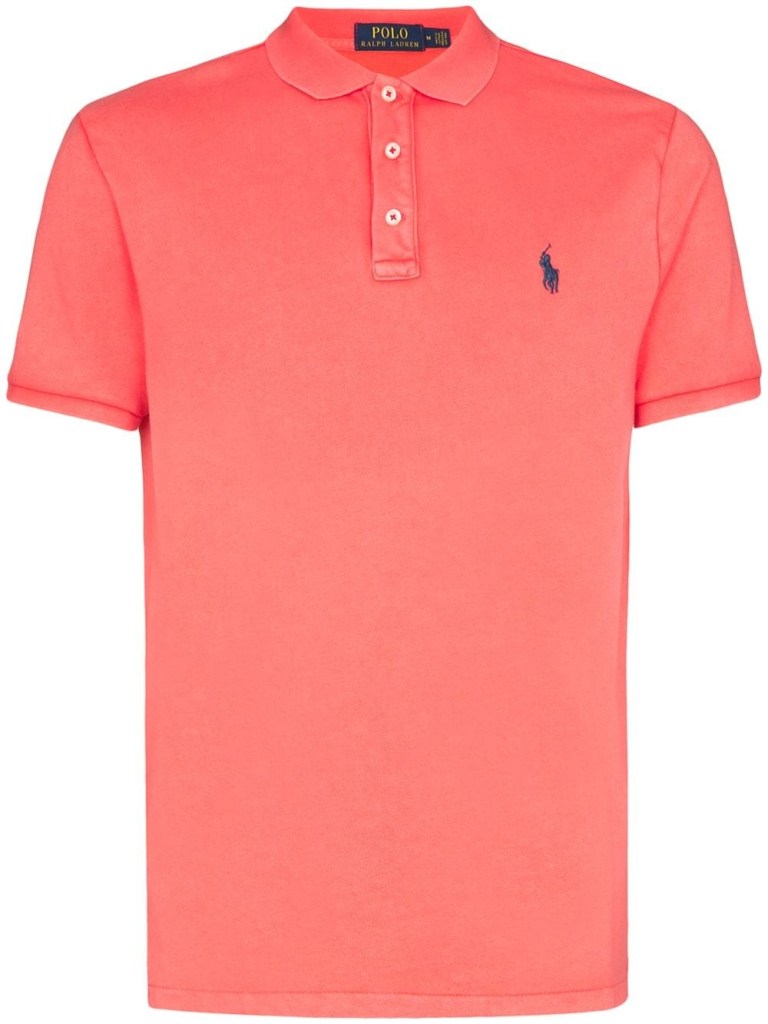 INSPIRED BY THE JET-SET

Whoa! Did you know that Orlebar Brown has a 007 collection? The British clothing company has re-released styles with more than an homage to the greatest spy that ever lived in movies and books. Their Jarret two-tone terry polo shirt was inspired by photos of the 60s Jet Set as lensed by Slim Aarons. This lightweight terry polo has a ribbed collar and cuffs and a button placket. 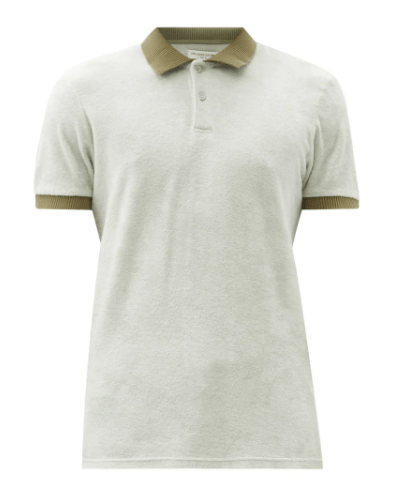 Todd Snyder knows what guys want; clothing that fits well, feels good and can be lived in forever. Case in point: this Montauk Polo. He brought back the style for summer and made it in a soft cotton blend that’s so absorbent, if you forget your towel at the beach, you can use it to dry off, pop it on and still look fresh. It comes in other colors, too. 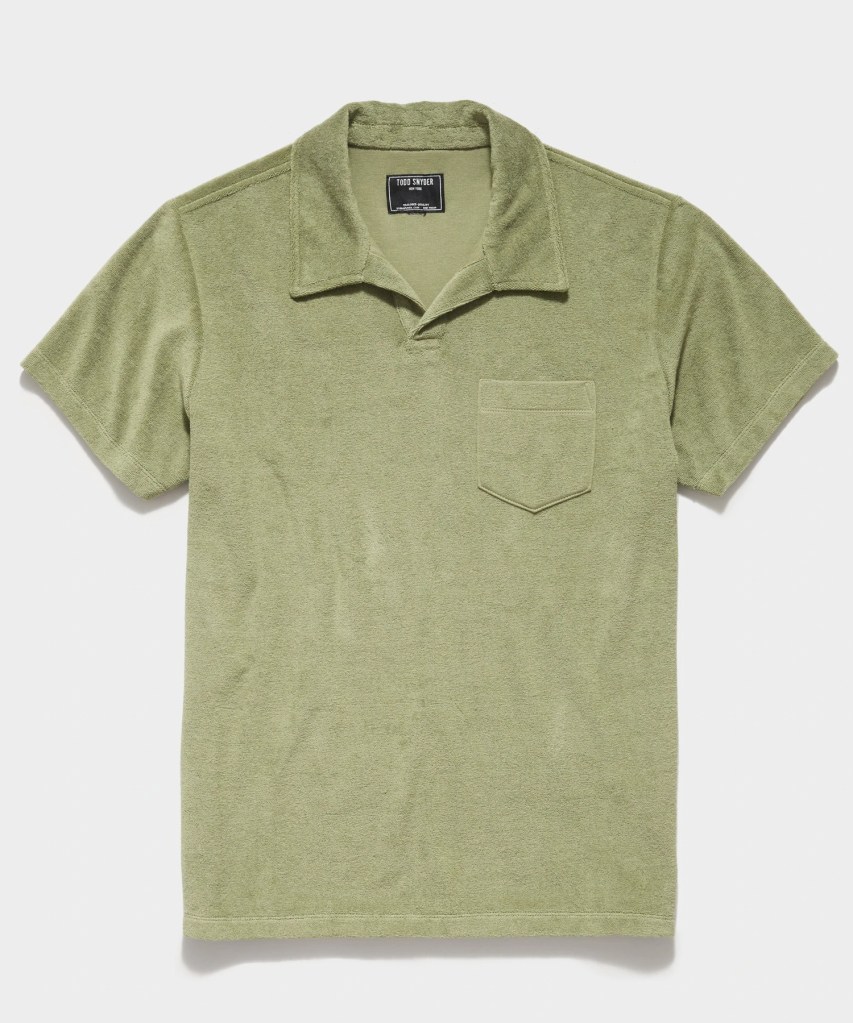