Growing up we were always told that we needed to present a certain way through our clothing in order to represent our gender the “right” way. Girls wore dresses and boys wore suits. Girls wore skirts and boys wore shorts. Girls wore makeup and boys used hair gel. Well, times have changed — and now we’re throwing on the best unisex clothing.

One good thing that’s come from the past couple of years is how open people are becoming to bending gender through fashion in order to express themselves. From Billy Porter throwing on a gown at the Met Gala red carpet a few years back to Jacob Elordi’s iconic glitter moment from the hit HBO series Euphoria, gender expression is being pushed in ways nobody ever expected in this modern age, allowing everyone to break the barrier of gender-expressive limitations in whichever way they’d like.

So you’re a guy who wants to throw on a slip dress? Go for it. A woman who’d rather rock a pantsuit to work? One hundred percent yes. A non-binary person matching a red lip and smokey eye with a suit and tie? That’s what we like to see. Two words: fuck it. If there’s ever been a time to put yourself out of your comfort zone and dress in a way you never thought would be deemed acceptable, it’s now.

Apparel companies are also blurring the lines between their men’s and women’s departments by releasing more unisex clothing. If you need some guidance on shopping for unisex clothing but you don’t know where to start, we’re here to help. Here are some of the most fashionable unisex clothing trends to rock in 2022. It’s time to gender-bend, baby.

Pardon our French, but we’re fucking obsessed with Rowing Blazers. Not only did they replenish the classic “prep” style in a way that feels fresh and street-ready, but they did it in a way that’s completely multi-gender. The majority of Rowing Blazers styles (whether it be rugbys, tees, shorts, whatever) are made completely unisex. Though, the biggest standout is definitely the rugby shirts. They’re heavyweight, colorful, long-lasting and some are even available cropped for all you women, men and everyone in between. Because who doesn’t love a cropped moment? 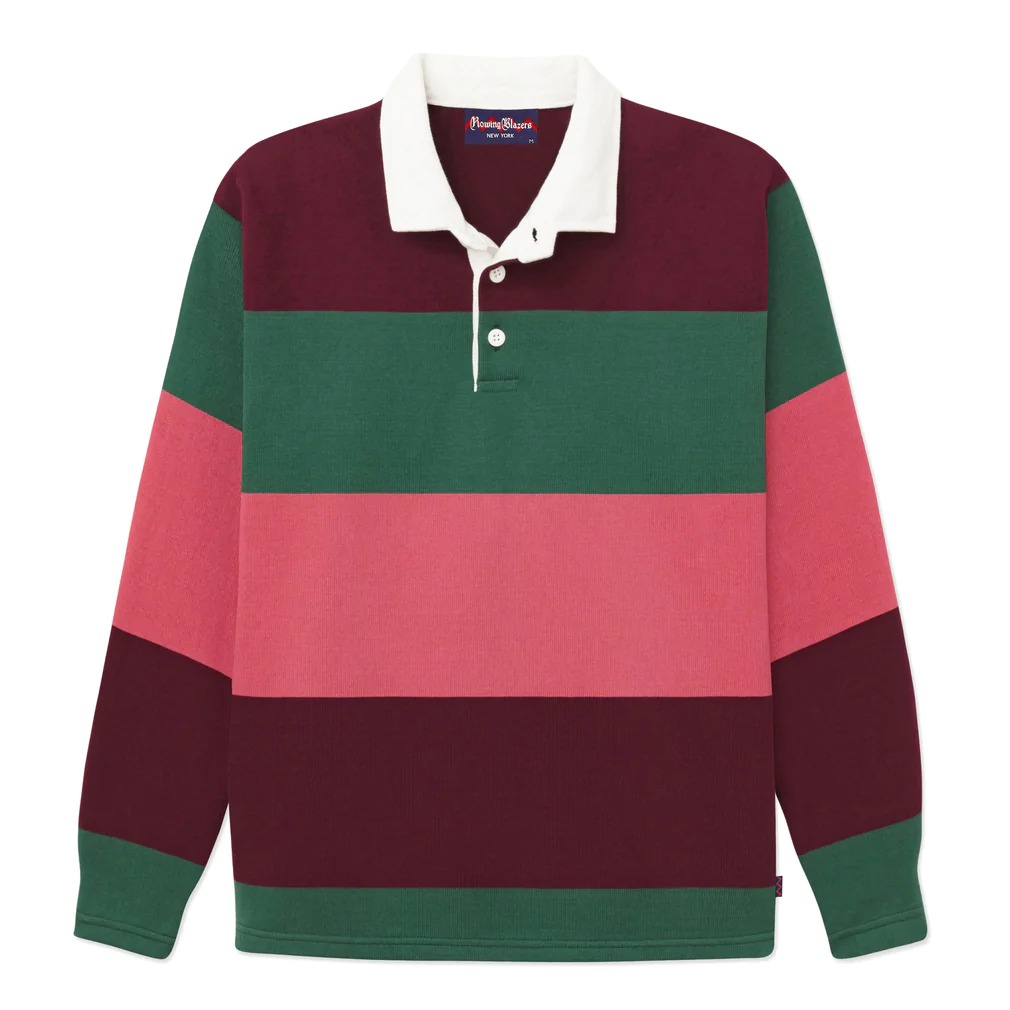 One thing that’s become increasingly more and more unisex is jewelry. Men, women and everyone in between are rocking gems, colors and styles that match one another for the first time, well, ever. One jewelry brand we’ve been geeking over hard lately is called Frasier Sterling, an almost over-the-top “girly” jewelry brand that makes cute pieces for everyone. Everything is eccentric and loud, which is exactly where our personal styles are going these days. Maybe pick up a beaded and pearl necklace with your name on it, a pink cowboy hat ring or a charm bracelet. It’s up to you!

Boy Smells, which is our go-to brand for deliciously scented candles, offers a wide variety of unisex underwear they’re calling “Unmentionables“, which are built to break gender stereotypes as the layers come off. The idea is simple: wear what you want to wear, whether they be boxer briefs, tighty-whities, trunks or bralettes. Each pair of underwear comes with either a front pouch or a flat fix for total comfort no matter what you have below the belt. The bralettes offered are cozy as hell and have the ability to support as little or as much as you have on your chest. So, if you’re someone who presents as a guy that has a flat chest, you have all the right to throw on these candy-colored bralettes if you desire. For people who otherwise wouldn’t wear clothing items like this, this is a great start to bend your gender expression due to the fact that nobody will ever know what you have on under your day-to-day fit — unless you want them to. 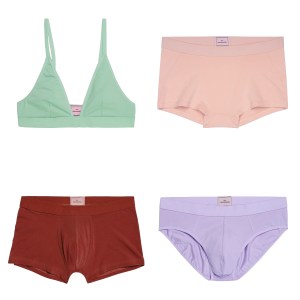 We’ve been rocking Converse since we were tots, but unknowingly, we were sporting unisex fashion that entire time. These sneakers have always been gender-neutral and look just as good with a pair of dad jeans as they do with a midi skirt. You can snag a pair of Converse in practically any shade, color and style now. While most of the time, experimenting with your color choices aren’t always going to push the gender boundary, these could work as an awesome addition to whatever else you choose to wear in your day-to-day. 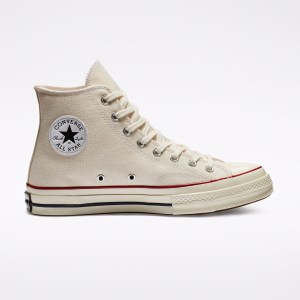 It’s safe to say that we’ve been semi-obsessed with kilts as of lately. Ever since we had the chance to chat with celebrity kilt designer Howie Nicholsby of 21st Century Kilts, kilts are all we can think about. Kilts on the runway, kilts on the street, kilts in the club. We’re kilting our way around 2022 and that’s final. This made-for-man skirt is now deemed acceptable to wear by everyone. For guys, it’s an excellent way to rock a skirt for the very first time without feeling totally out of your comfort zone. For women, this is a more masculine way to rep something you probably wear relatively regularly. And, for all of you gender non-conforming people out there, the kilt is the epitome of a garment that says “fuck you” to gender stereotypes. All in all, it’s an iconic must-have that should be in everyone’s closet. 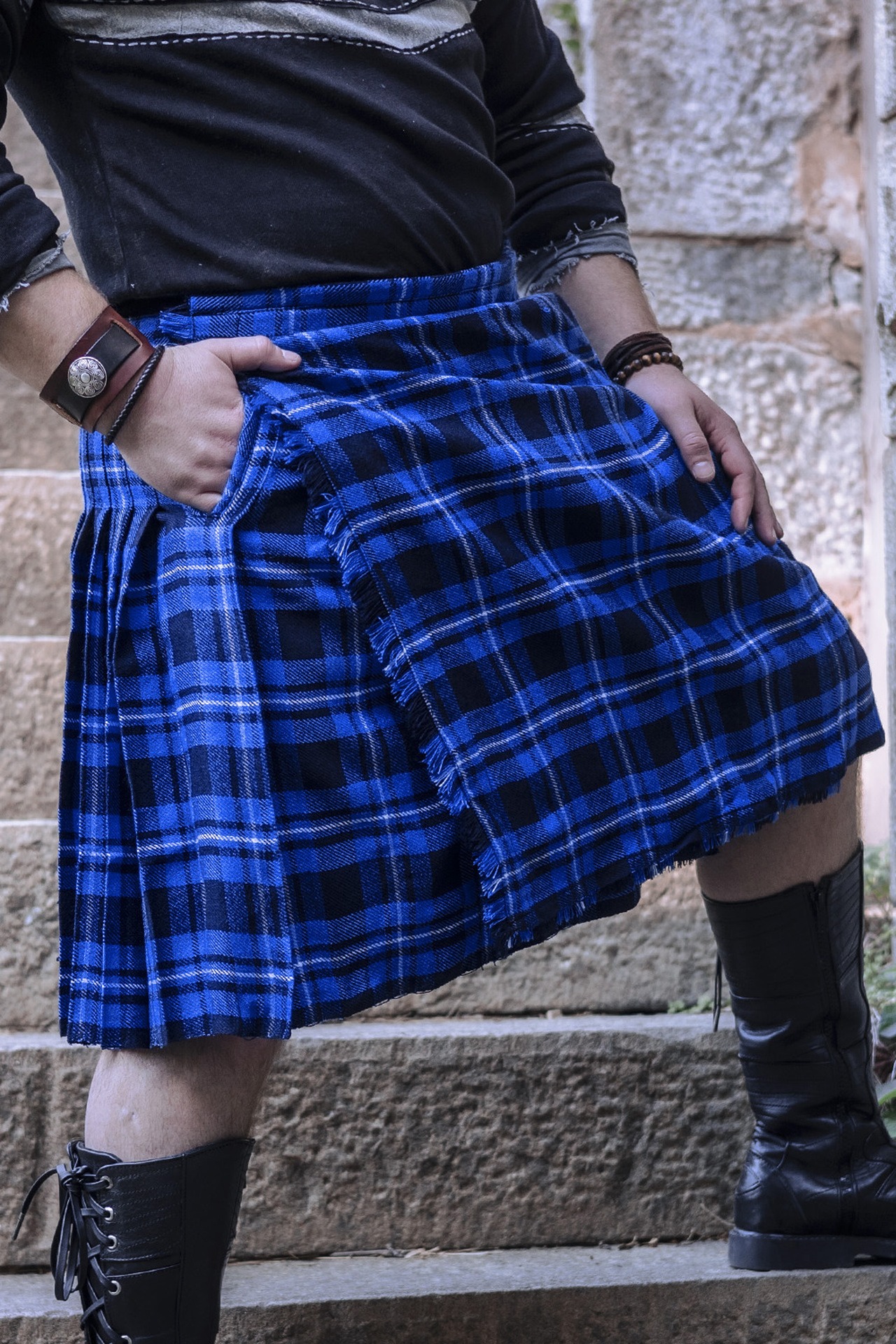 No matter your gender or body type, crop tops are sexy and we all know it. At this point, it’s just common knowledge. For men looking to dip their toes into traditionally deemed “women’s clothing”, know that crop tops weren’t always necessarily perceived as feminine. I mean hey, just look at Zach and Slater from Saved By The Bell, the two of them killed the crop top game. We’re loving this vintage-inspired all-American crop top for lounging at home, running errands, working out at the gym or heading to the bar down the street. Pair it with your favorite pair of Levi’s and a dirty pair of all-white Converse hi-tops, and you’ve got yourself a look, my friend. 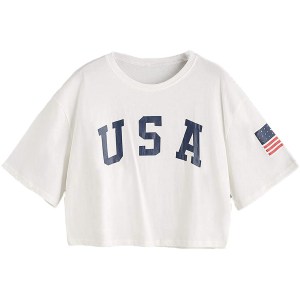 PacSun said, “pink swim trunks for all!” Although we’re long past the days of pink being an emasculating color, it’s still referenced mainly as a more feminine color. All we have to say: who cares? Wear pink. It’s pretty. These swim trunks are made for all genders to rock from the sand to the beach bar. Each pair has small embroidered lettering in white at the bottom of one leg, saying “Pacific Sunwear Los Angeles” for that classic warm-weather feel. 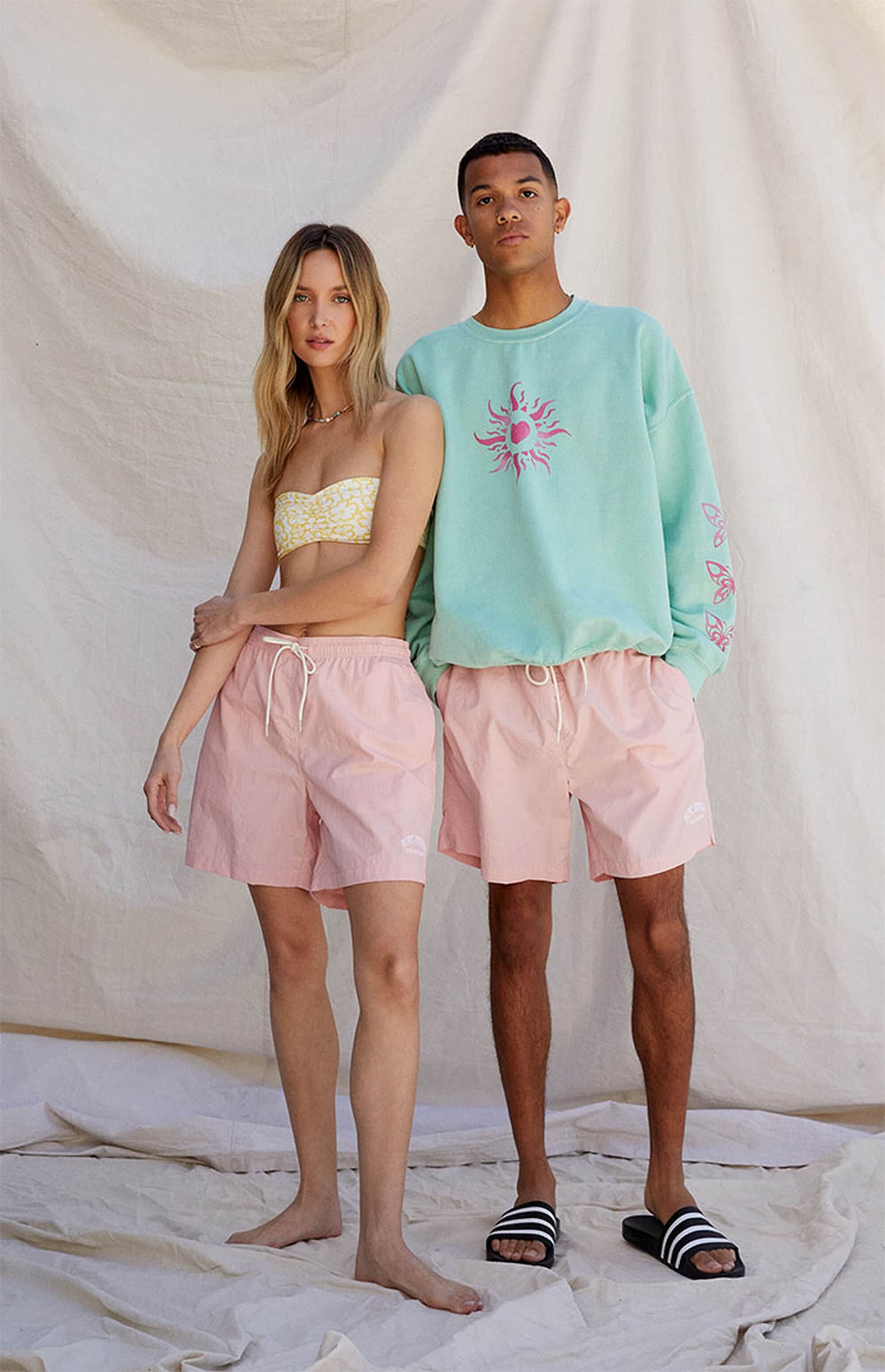 8. To Be Frank Nails

Everybody’s painting their nails in 2022, but no brand is doing the art better than To Be Frank. This nail polish brand exists to abolish any and all gender norms in nail painting with rugged construction made for an easier grip and all hand types. Colors range far and wide for a selection of different vibes to go for. No matter your gender, we suggest you get painting with To Be Frank. 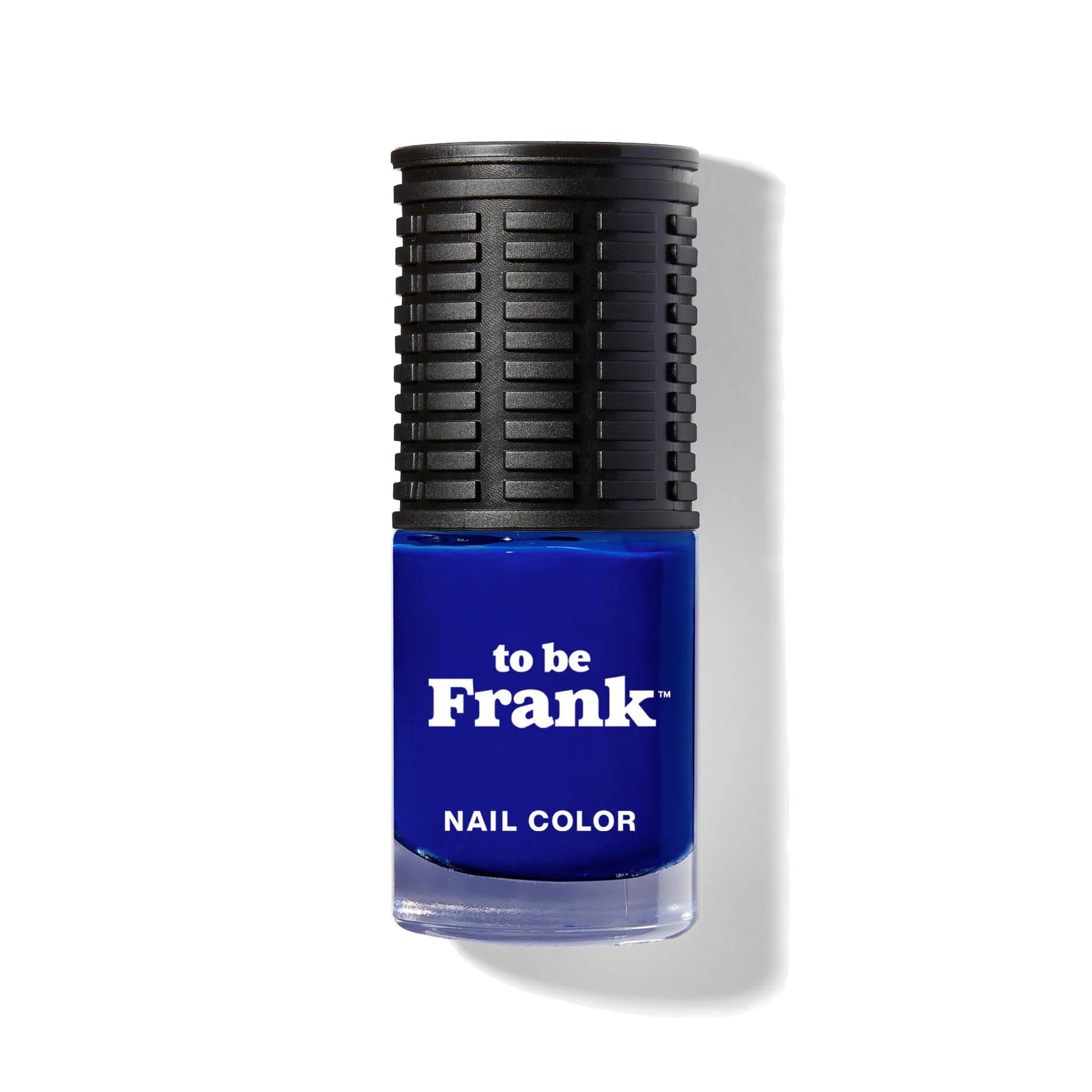 Courtesy of To Be Frank

To Be Frank Nails