As the next step in a fashion career that began with modeling at age 16, Ghana-born, London-raised Edward Enninful will officially assume the role of Editor-in-Chief at British Vogue. Enninful will replace Alexandra Shulman after her 25-year tenure.

The news was announced this week and makes Enninful the first person of color, and the first man, to ever take the lead role at the esteemed publication. Both traditional media and social media lit up immediately, with words of congratulations. Friend and frequent collaborator, Naomi Campbell, tweeted her pride: 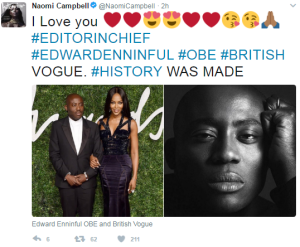 Enninful, 45, has been the creative and fashion director at W Magazine since 2011. Prior to that, he was a contributing editor to American Vogue as well as Italian Vogue, where he was the driving force behind the best-selling Black Issue — an entire issue of Italian Vogue dedicated solely to black models, actors and artists. Anna Wintour, artistic director of Condé Nast and editor of American Vogue, called it “a brilliant choice, ” telling the New York Times that “Edward will undoubtedly shake things up in a way that will be so exciting to watch.”

Former Victoria’s Secret Angel Karolína Kurková also tweeted congratulations, saying “I’m so happy for you and excited for your future!” 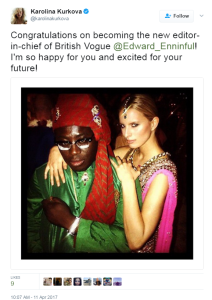 “Edward is forward-thinking, innovative, commercially astute,” Caroline Rush, chief executive officer of the British Fashion Council, told WWD. “He is a true revolutionary when it comes to his ideas on what fashion should be. I am excited to see how he will positively shape this era in fashion and publishing, leading the talented team at British Vogue.“

Those who have seen the 2007 documentary The September Issue may remember Enninful’s reaction to a particularly difficult colorblock meeting with American Vogue editor Anna Wintour. “I want to killl myself,” he pleaded to Grace Coddington afterward. We’re sure he’s glad he didn’t.