Though President Joe Biden was inaugurated yesterday, millions of Americans were definitely feeling the Bern. Why? Those adorable mittens, of course.

Aside from securing a brand new president, Grandpa Joe, the highlight of yesterday’s inauguration was Bernie Sanders sitting in his little chair, crossing his little legs, clad in an army green puffer jacket with the most adorable mittens we have ever seen.

Sanders, the incredibly memeable senator from Vermont, and his mittens instantly sparked a torrent of memes on Twitter, making him the cutest and most hilarious part of the day. This isn’t the first time Sanders has been the subject of a viral meme. And while most people who accidentally become the subject of a viral meme are being mocked, these Bernie memes only add to the senator’s considerable charm.

The senator’s young fan base memes with love:

it’s time to loosen up these damn buttons! pic.twitter.com/bmuqExqw2T

Now that the meme, based on a photograph taken by Brendan Smialowski of Agence France-Presse and Getty Images, has spiraled out of control, everyone is wondering — where in the hell can we buy those Bernie mittens?

The short answer is: you can’t. These mittens are a one-of-a-kind pair created from old sweaters and recycled plastic by 42-year-old Jen Ellis, a second-grade teacher from Essex Junction, Vermont. Ellis had gifted the mittens to Sanders in 2016, having no idea they would become so iconic all these years later.

I made Bernie’s mittens as a gift a couple years ago. They are made from repurposed wool sweaters and lined with fleece (made from recycled plastic bottles). #BerniesMittens pic.twitter.com/lTXFJvVy9V

Ellis tells Jewish Insider, “Honestly, I don’t really do it a lot anymore,” she said of the now-famous mittens. “I’m flattered that they want them, but there are lots of people on Etsy who sell them and hopefully people will get some business from them.”

Are we upset? Yes, we are. The mittens have become a historical artifact in a matter of minutes. Why did Sanders choose to wear them, though? Easy. He tells Jewish Insider, “In Vermont, we dress warm — we know something about the cold… We’re not so concerned about good fashion. We want to keep warm. And that’s what I did today.”

But whether he likes it or not, Sanders is now a fashion inspiration.

While we are upset we can’t own a true Ellis recycled sweater mitten ourselves, she does have a point about shopping through Etsy. So, if you are interested in snagging a similar set of Bernie mittens, here are a few great Etsy shops we found online.

Even though they won’t be exact replicas of Bernie’s inauguration day mittens, they will still be unique. Because these are all upcycled mittens created from old sweaters, all of the mittens below will be one of a kind.

These mittens are practical and cozy, and we think the senator would approve. 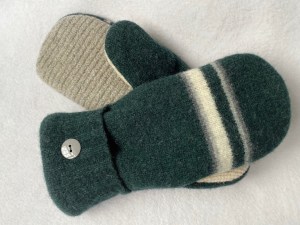 Don’t settle for a pair of mittens. This Etsy shop makes cozy winter hats, too! 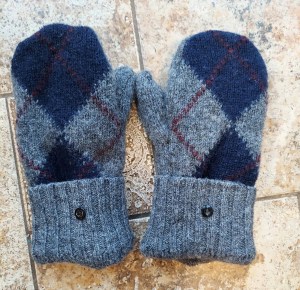 Finally, you can check out Old Wool New, which makes classic, unpretentious mittens to keep you warm, just like Bernie would want. 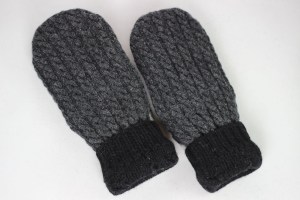