The casualization of the workplace wardrobe was supposed to free the average office worker from restrictive long-sleeve shirts and uncomfortable shoes, but for many, it’s created more questions and confusion. For the style-conscious, ditching the standard business casual dress code means more room to explore, but other guys would rather just look appropriate and not have to overthink it. In many offices (at least outside the finance and legal worlds) elevated tees are tolerable and clean denim is de rigueur, and post-pandemic, we’ve even seen guys show up to work in joggers, something that would have been unthinkable circa early 2019.

But if there’s one garment that remains untested in the workplace, it’s men’s shorts. There’s still a couple of months of warm weather remaining, and after a summer of record-breaking heat waves, we had to ask — can men wear shorts to work?

To answer this question, we decided it was worth dipping our toes (and calves, and maybe our thighs) into this debate.

Shorts have historically been rejected as professional attire, even in casual-leaning offices. But with summer temps climbing up (and up, and up) and dress codes on a continuous slide toward comfort, how long will it be before the dam breaks and guys can bare their thighs in the boardroom? Perhaps we’ve already arrived there. To find out, we talked to Gabi Meyers of Style Girlfriend, an image consultant service that dubs itself a “digital handbook for the modern man” and stands out among the crowded menswear bloggerati by offering a female-driven perspective on men’s style.

Meyers surprised us by being pro-shorts in the office, but she noted that she’s “only worked in more casual offices, so [she’s] used to seeing exposed knees on a hot day.”

In the age of athleisure, wearing shorts to work is acceptable in extra casual offices, but we recommend reserving your office shorts for unusually warm summer days. In certain professions such as finance and the legal world, shorts are still unthinkable attire for the office. Even in offices with super casual dress codes, Meyers pointed out that any old pair of shorts simply won’t do.

“Look for the same fabrics as your favorite work pants — if you can wear khaki pants to work, the same textile should fly in a slightly shorter silhouette,” Meyers said.

That means that it’s best to avoid anything too athletic or beachy.

“Avoid excessively tight or baggy fits, big pockets, and outdoorsy fabrics — while I think a 5-inch cargo short is super cool, you might want to save those, cutoff jean shorts and relaxed linen styles for the weekend,” Meyers added.

Unsurprisingly, the inseam of the shorts is also important, and while we’re big fans of the 5″ inch inseam, that’s a lot of leg for the workplace. Meyers agreed, saying that even though she does like the 5-inch inseam, there are better options for the office.

One under-discussed element of the inseam wars is the fact that height matters. A 5-inch short will hit differently on a six-footer than it will on a short king, so adjust accordingly.

The History of Shorts, Men’s Fashion and Formalwear

You may be breaking ground in your own office by donning truncated trousers, but shorts have been worn in some of the most traditional of institutions, including the British military. Gurkha shorts were named after the Nepali soldiers enlisted in the British army. These were pleated, khaki-colored shorts with a built-in belt. Soldiers wore them with high socks and matching shirts tucked into the shorts. They were practical to wear in the blisteringly hot climates the British Empire ventured into.

More recent devotees of the short include style icon Pharrell Williams, who has managed to wear them with everything from a tuxedo jacket to a hoodie. American fashion designer Thom Browne has built his own army of men and women clad in a short suit uniform; dress shirts, blazers, leather shoes and matching shorts. Browne has managed to make wearing shorts look more formal than the finance bro dress pants and fleece vest uniform. And while Browne loves the gray suit, arguably the most traditional item in all of American menswear, he’s pushed the boundaries of style by putting men in everything from kilts to full-blown dresses and even tutus (at least on the runway).

Tutus, admittedly, are a bit of a detour from the workwear shorts conversation, but they highlight the fact that gender norms are changing, and there’s nothing keyboard warriors on Twitter can do about that. Is the no shorts in the office thing an outmoded gender norm, or a way to maintain professionalism or safety in the workplace? It’s unclear, and it’s unlikely there will be any totally cut-and-dry answers anytime soon.

Attempting to further clear up this issue, I reached out to the human resources department of SPY’s parent company, Penske Media Corporation. PMC is a media company that owns publications such as Rolling Stone, Variety and WWD. Human resources directed me to our employee handbook, which makes no specific mention of shorts — at least not yet — but states that “Employees who do not come into regular contact with the Company’s customers, vendors or others having business dealings with the Company must use good judgment and dress appropriately for a business casual environment.”

The handbook was specific in one regard, which was that “Torn jeans, tank or halter tops and bare midriffs are not permitted at any time.” So you could, theoretically, wear shorts, so long as they weren’t torn or otherwise distressed, and showing too much skin is never acceptable in the office. While the offices are rife with jeans and sneakers, I’ve personally never seen anyone wear shorts at the PMC Los Angeles office. I don’t think I will anytime soon, even though I bike to work most days.

How To Dress Up Shorts for the Office

If you do want to wear shorts, though, Meyers gave us advice on the best ways to style them for work. She pointed out that shorts can be dressed up. It’s the approach taken when trying to balance the inherent informality of the garment.

“Style them with existing work staples — shorts don’t require a t-shirt and sneakers, they can be dressed up,” Meyers said. “In a more casual office, you could [wear] a seersucker pair with a solid polo and some minimal low-top sneakers. A lightweight crewneck merino sweater and oxfords can work too,” she added.

Should shorts prove verboten in your workplace, or you’re just not ready to make that leap, there’s still hope in the form of lightweight pants.

“Look for linen-cotton or linen-wool blends for extra breathability without the major wrinkles of 100% linen pants. Performance fabrics with cooling technology and moisture-wicking capabilities can also offer some respite from summer heat,” Meyers advised.

J Crew makes our favorite 5-inch inseam shorts, and their chino shorts are also available in a slightly less revealing 7-inch inseam. They’re made from cotton, with just enough elastane to keep you comfortable without looking technical. 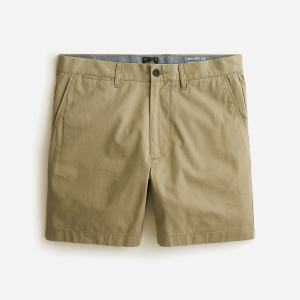 If you want pants, you could do a lot worse than these. Alex Crane’s chambray pants are made from 100% linen, but the fabric is substantial enough to resist wrinkling. 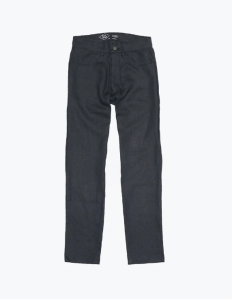 They’re a bold move, but Banana Republic’s Heritage shorts are inspired by traditional Gurkha shorts, down to the built-in belt and double-pleated design. Promise us you’ll wear the knee-high socks with these, though. 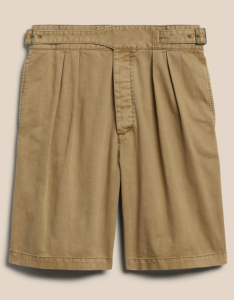