Another season, another excuse opportunity to buy new footwear. But what to buy? You can never go wrong with a pair of casual boots for men. With so many people working from home, it makes sense to buy boots that have a relaxed style that easily fit in with what you’re already wearing. We’ve covered Chelsea, Cowboy, and combat boots before. For each of those styles, there are casual, work and going out versions. In this piece, we’re concentrating solely (pardon the pun) on the best casual boots men can wear right now.

What is a casual boot?

A lot of casual boots for men are based on the classic men’s heavy-duty work boot. We’re talking a thick rubber outsole, laces up over the ankle, a leather construction, a padded throat and a very plain silhouette. The modern casual boot for guys can come in suede, nubuck and even vegan materials.  While some may lace-up, they’re at once a tad more refined and a tad more laidback than the classic work boot. You can find casual boots that have a cap-toe, or a sneaker-type outsole and even faux laces.

These leather boots have a touch of rockabilly vibe, so go ahead and peg your jeans (if you want to) when you lace them up. These casual boots have tonal topstitching and a cap toe. This featured pair is in Arizona Adobe, a burnished brown shade that has a slightly aged patina. Built for durability, style, and comfort, these leather boots have features that you’ll find in pricier pairs. We’re talking items like cork bed midsoles that mold themselves to your feet, Poron Antimicrobial Shock Absorbing Insoles, Goodyear welt construction, steel shanks, and custom eyelets. We’ve used Thursday Boots in other roundups because they’re known for their incredible quality and integrity.  Thursday Boots (and shoes) are made by artisans from around the world and paid a fair wage. 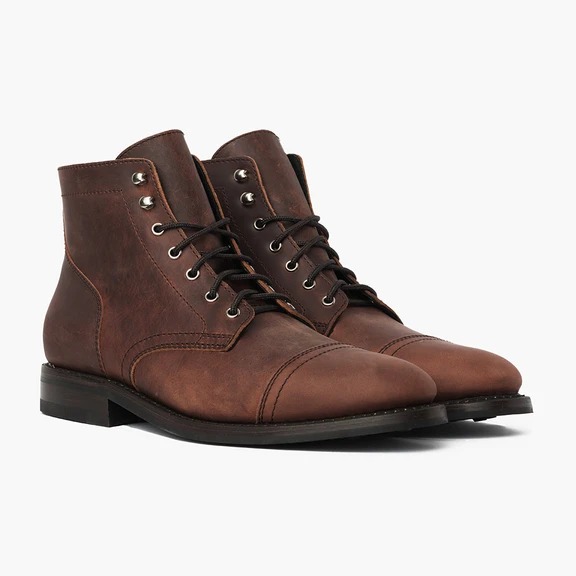 Of course, when you’re discussing men’s casual boots, you’re going to add Dr. Martens in the mix.  We’ve mentioned in other articles how their combat boots are very comfortable and have a timeless appeal. Heck, they’ve been worn by everyone from German housewives in the 40s to punk rockers in the 70s. The brand literally makes hundreds of styles for men, women, and kids. We’ve picked their Chelsea boots because they give off a casual vibe and due to their construction, they’ll continue to look brand new years after you bought them. This is one of Dr. Martens’ heritage styles, it was created back in the 70s, and is now part of their “Lost Archive” collection. It’s got all the Dr. Martens touches you love, like the grooved outsole that lasts for miles and miles, air-cushioned insole, back pull tab and contrast topstitching. 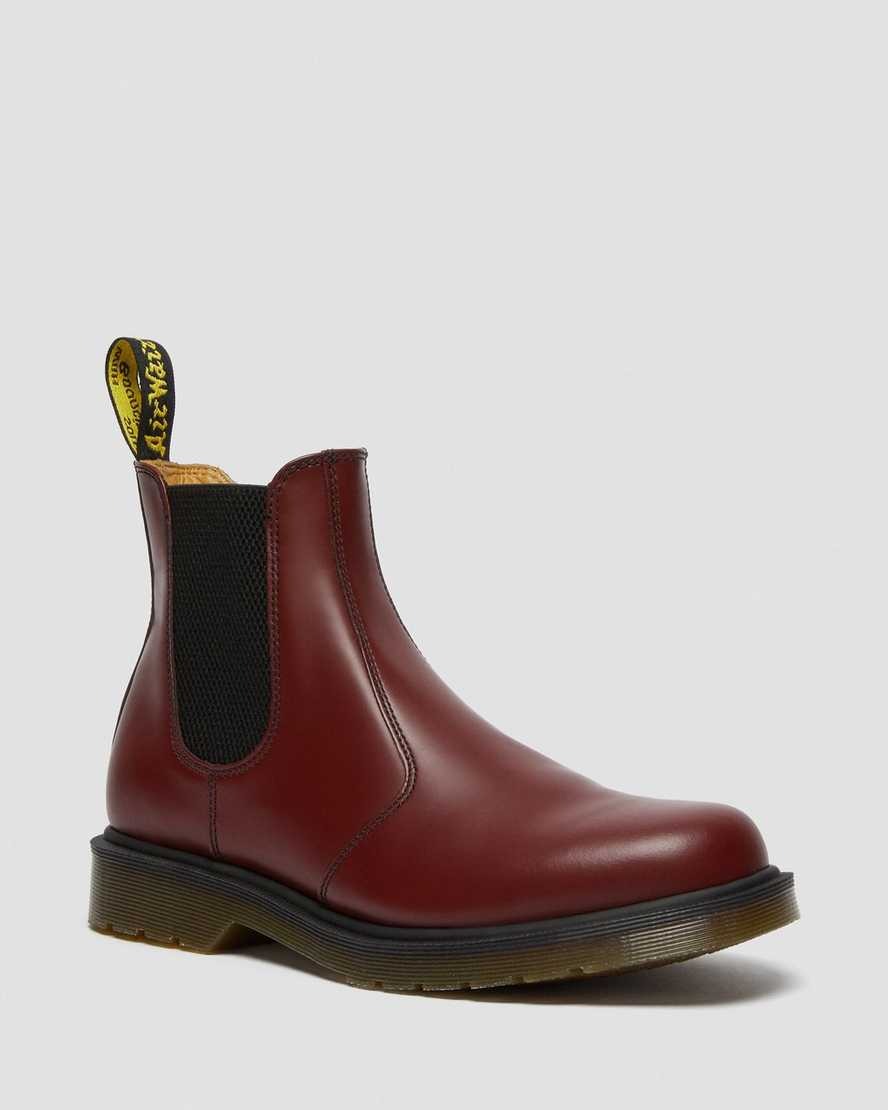 Back in the early 1900s, Wolverine’s named their work boot,the “1000 Mile” because they believed it would give at least 1000 miles of comfort and use before it was retired. As decades rolled by, the 1000 Mile handcrafted boot has continued to deliver time and again. This Wedge Boot is built on Wolverine’s heritage style and has been updated for weekend wear.  Made in the US, the Wedge outsole offers extra cushioning and comfort. The leather is treated so that as it ages, it develops a rich patina. This casual boot, which also comes in brown, would look sharp with cords and jeans. 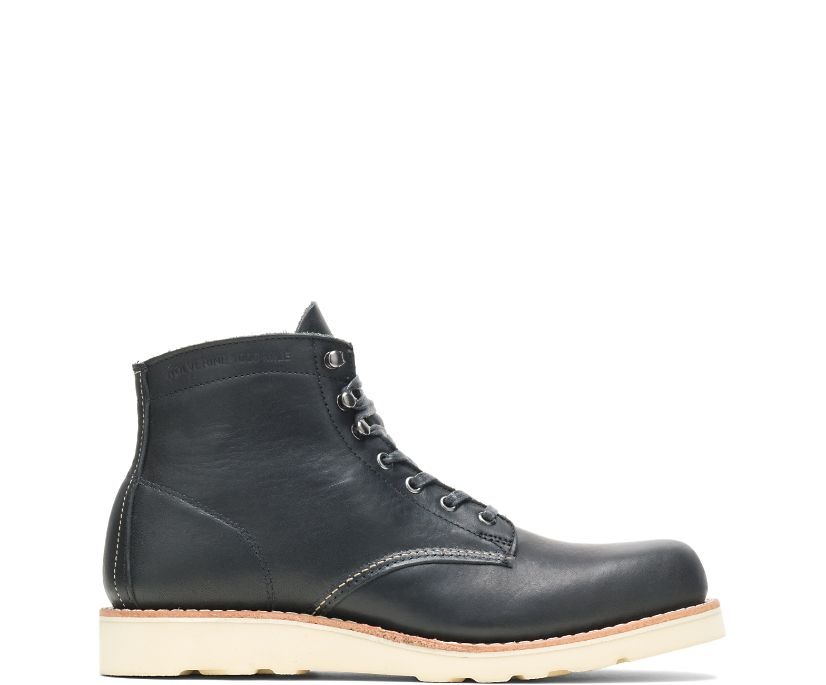 Chances are, at some point in your childhood or teen years, you owned a pair of Minnetonka Moccasin slippers or mocs. As an adult, you can wear one of their casual boots and relive the joy of owning cool footwear. How cool? Well, this is the exact style that Brad Pitt wore in Quentin Tarantino’s Once Upon a Time…In Hollywood. Originally launched in 1968 (Minnetonka mocs and boots were very big with hippies), the boot can be bought in the hard sole (shown here) or as a soft-soled moccasin boot. It has two silver-tone concho buttons and has fringe trim. It has a padded insole and a rubber outsole. 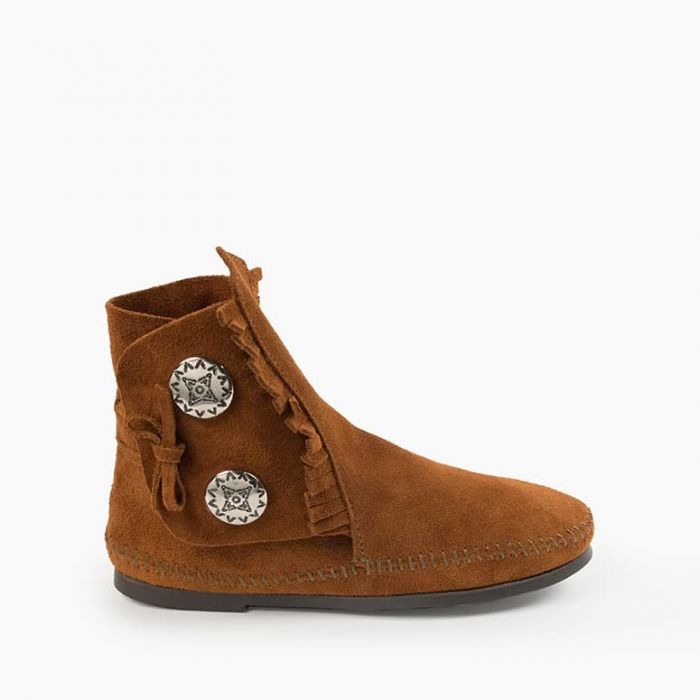 Combine casual and comfort and what do you get? A sneaker boot? Kinda. Florsheim’s Edge Chukka boot has a cushiony soft sneaker bottom with a suede Chukka top. The result is a laidback style that goes well with anything in your closet. The casual boot comes in black, charcoal and loden nubuck (shown here). If you’re a walker, you’ll love the padded throat, PU-cushioned midsole and TPU outsole. The boots also feature a removable footbed and the elastic laces mean you don’t have to worry about knots untying — you simply slip your foot in and go. 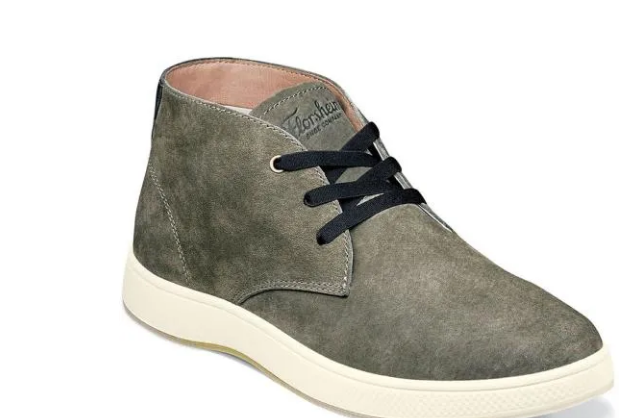 Goodyear-welt footwear and hand-sewn details are the hallmarks of all of Grant Stone’s goods. Based in Michigan and Xiamen, China, the company prides itself on creating luxury footwear that will last (possibly) longer than you will. You see, when you use Goodyear-welts, the soles can be replaced as opposed to chucking them out. These classically styled lace-up boots have a suede upper, are fully lined in leather, cork filler with a steel shank and a leather outsole. The white topstitching adds to its dashing style. They also come in wide and extra-wide widths. 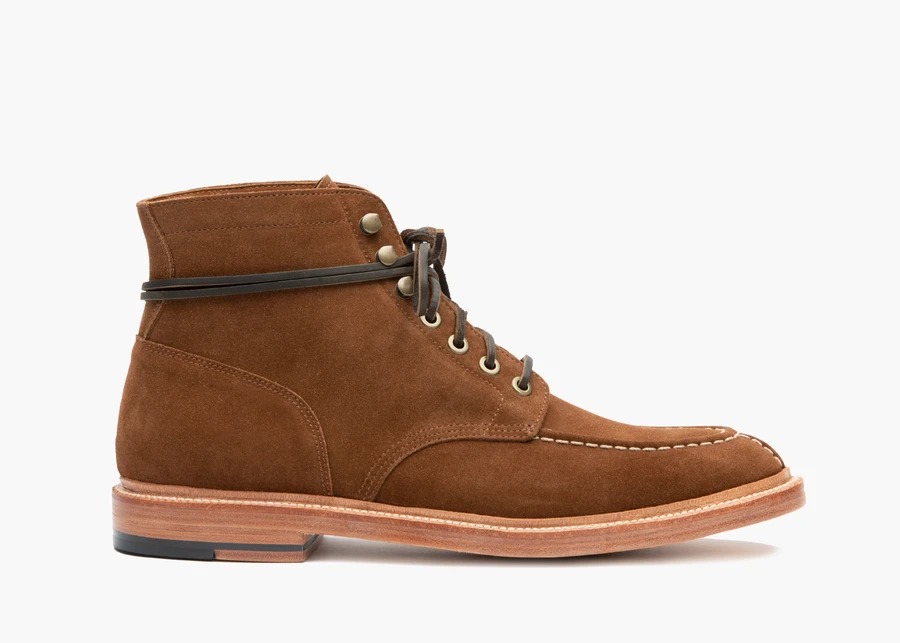 If you like your casual boot to be a bit more tailored-looking, check out these Horween Chromexcel Roughout leather lace-ups from Oak Street Bootmakers. The rough texture of the storm boot’s leather makes them appear to be suede, but they have a thicker hide. The way they’re styled makes them easy to pair with your oldest pair of jeans, you know, that pair that your SO wants you to toss out as well as trousers that are a bit more adult. Completely made in the US, the company has been creating hand-crafted footwear since 2010. They base their shoes and boots on the Goodyear-welt, which means that the shoes or boots can be easily re-soled and worn until you’re tired of them. These storm boots have a sweat-resistant midsole, a stacked leather heel, antique brass eyelets and use a Dainite rubber sole. They also come in black and antique tan. These Storm boots come with a guarantee: they will repair or replace any of their items that have faulty workmanship or defective materials. 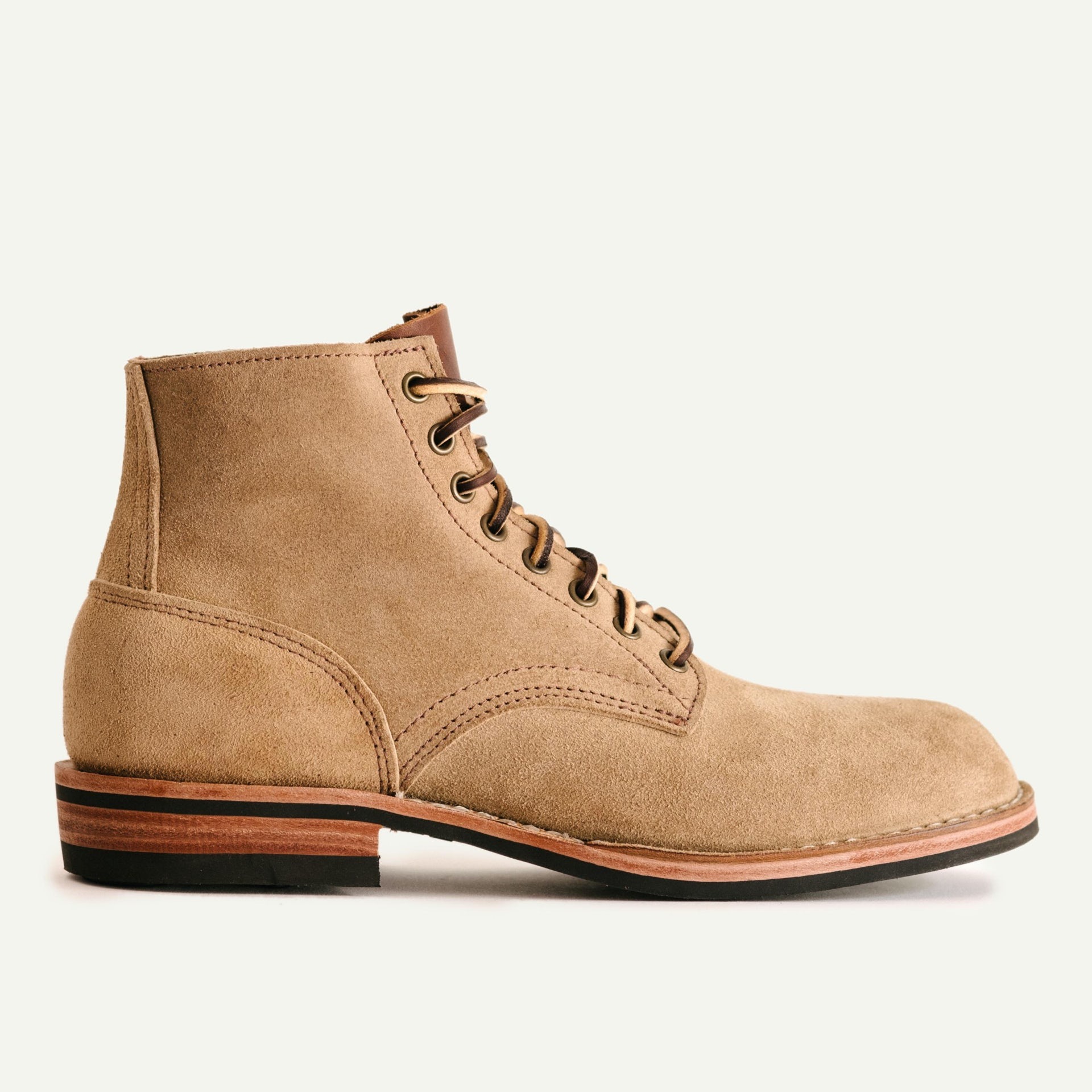 BEST MIX OF EAST AND WEST

Ariat boots first made their mark in sports and are the official sponsor for professional bull riding. They make a variety of cowboy boots that range from heavy-duty work boots to just kickin’ it. Their Rambler combines the Chelsea and the Shortie cowboy boot styles into an all-weather slip-on casual boot that’s good for all seasons. These casual boots are kind to your feet as they have a moisture-wicking gel-cushioned footbed . . . just say “aaah,” after a long day or night wearing them. 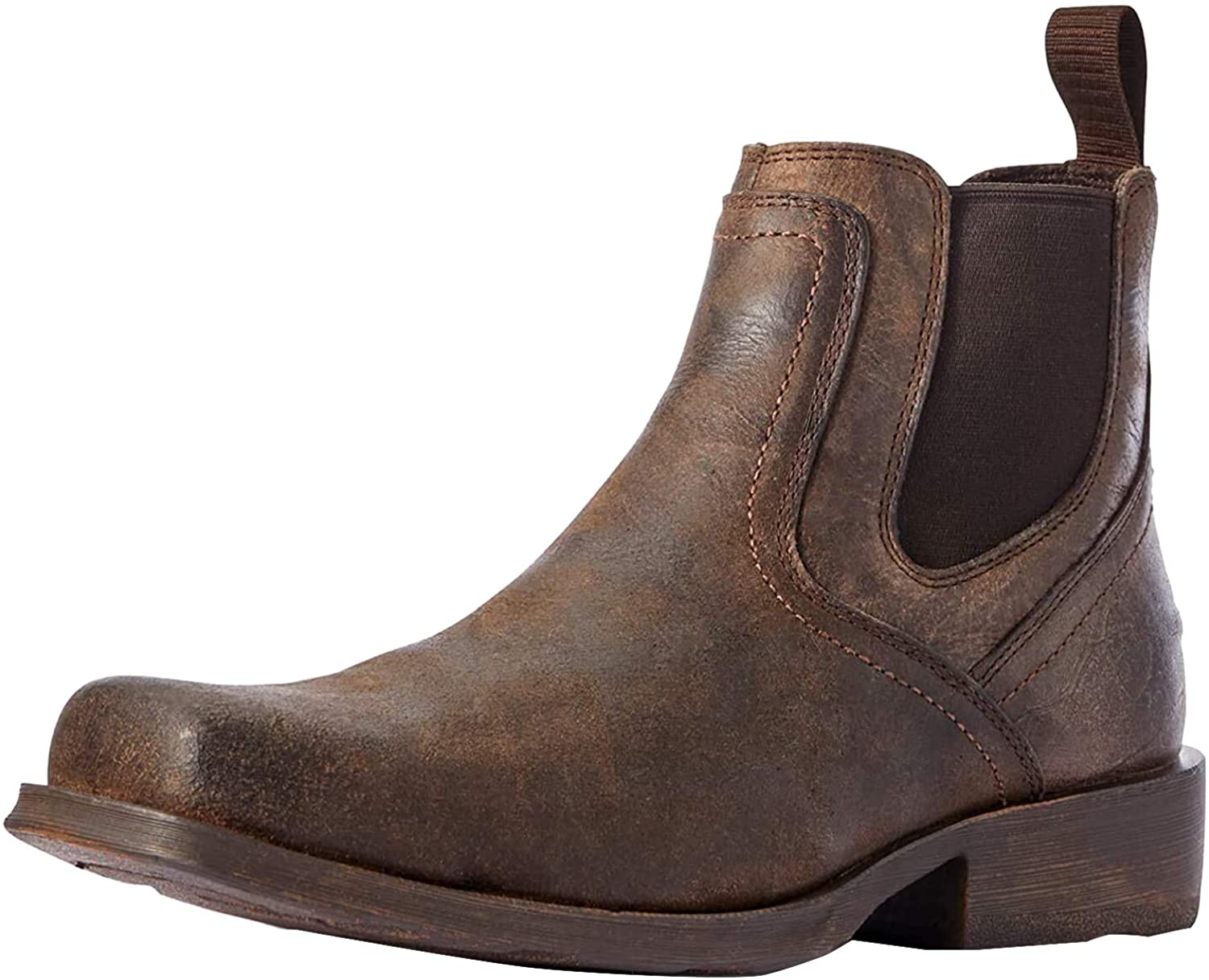 Carhartt has a history of creating solid workwear and they’ve also got streetwear cred. When looking for a casual boot that will last for more than one season, a lot of guys automatically opt for a Carhartt boot because of their legendary durability. Their lace-up casual boot has a comfortable four-inch shaft that’s padded at the throat. The top is stitched oiled leather and the midsole is cushioned like a sneaker. The lining is made to wick away moisture and combat odors too. They’re great for wandering around the city or suburban terrain. 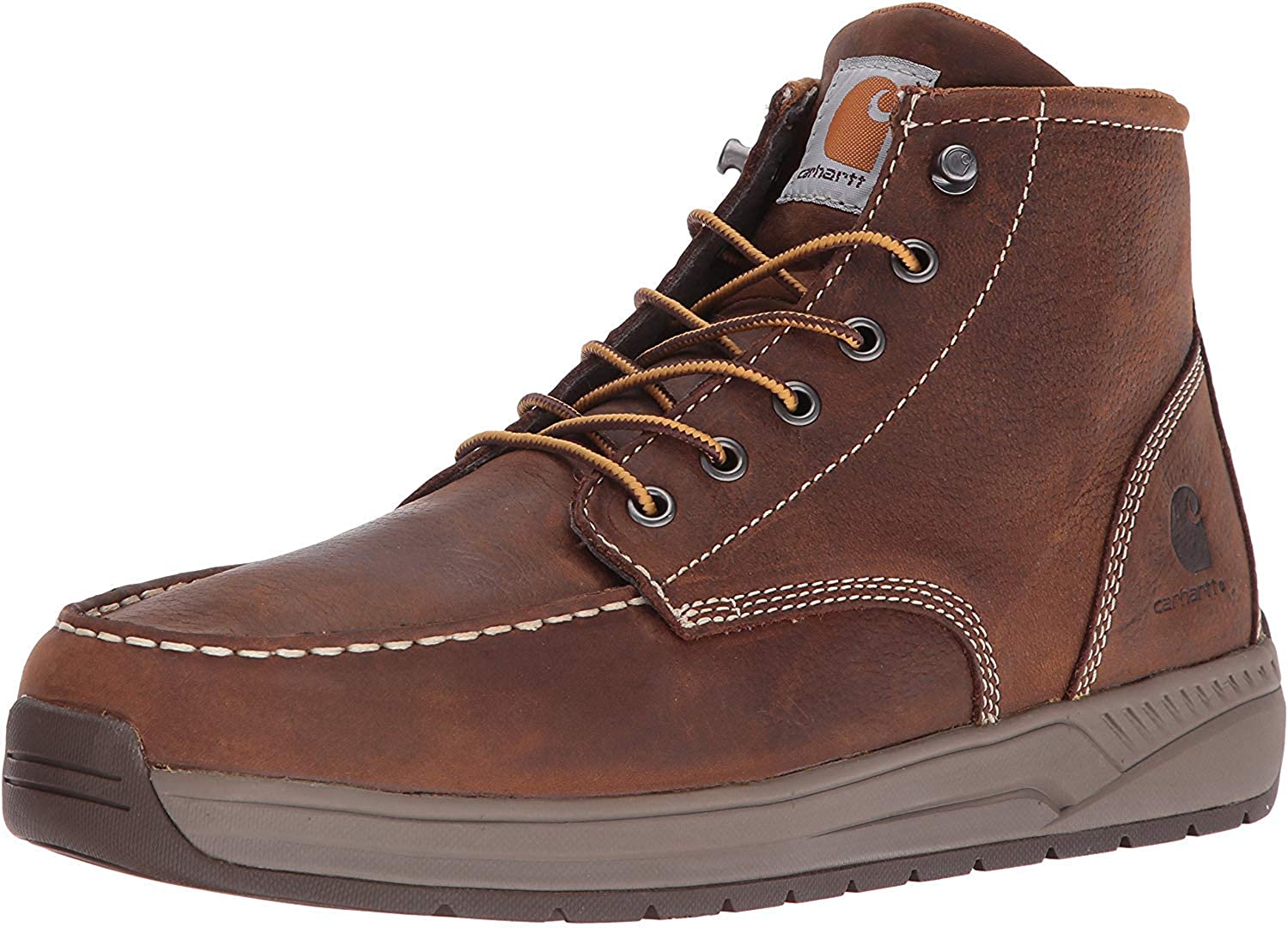 Did you know that Kanye West, Pope John Paul II and Cardi B are among the legion of famous people who own Docs? Well, if you’re ever on Jeopardy this knowledge could help you out. Seriously, they’ve been a hit since they hit the streets in the 40s. While they’re known for their leather boots, their vegan boots also have a huge fan base. The Felix is one of their shorter lace-up boots and has the same air-cushioned soles as the leather ones.  Made from a synthetic material known as the Felix Rub-Off, the entire boot is vegan-friendly. They have a Goodyear welt and can be re-soled. 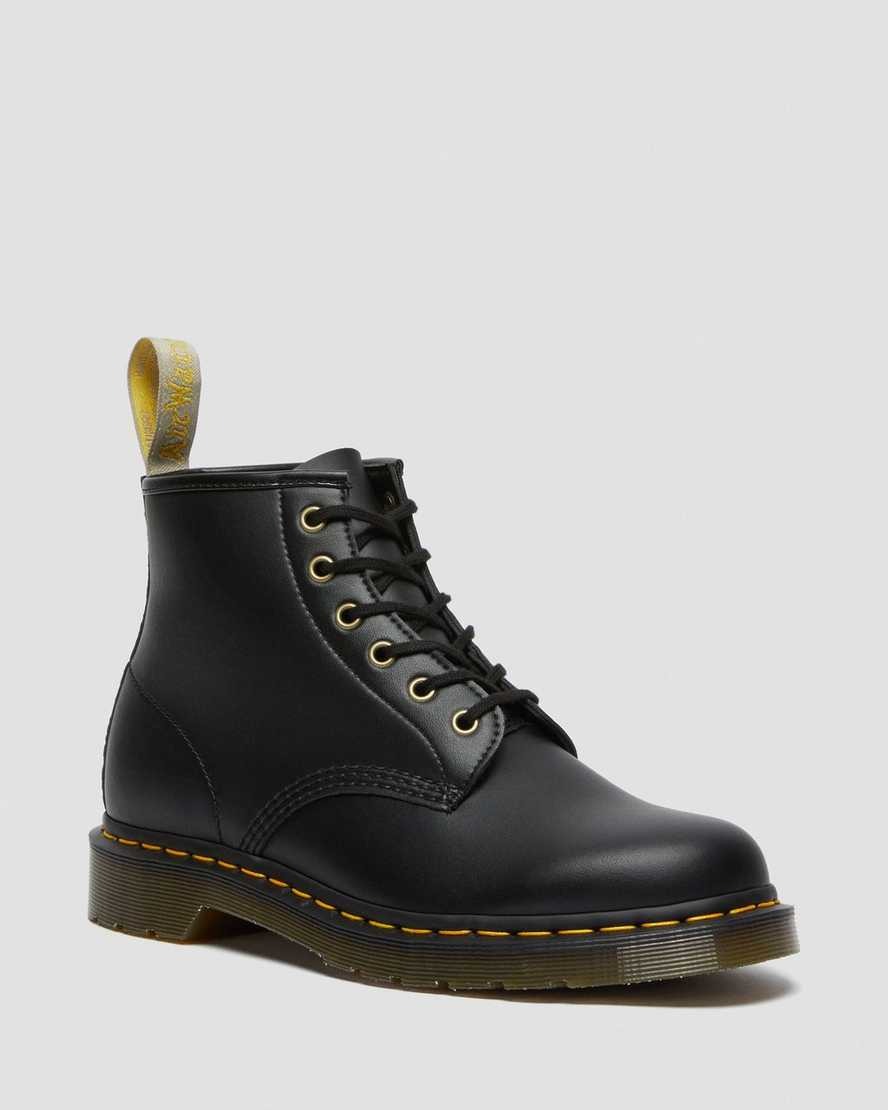 The Ultimate Guide to Men’s Boots in 2021: Our Icons and Must-Knows