Cole Haan just dropped another awesome Oxford, but who’s surprised? Today, the footwear brand released its next big launch, the result of a surprising collaboration with the streetwear brand Staple Pigeon.

Behold: Cole Haan x Staple Pigeon’s ØriginalGrand Ultra, a wingtip Oxford shoe built for the streets. The brands’ innovative pair of kicks will definitely be a bit too alien for some, don’t get us wrong. But we love the way these wingtips unapologetically merge street style and country club-couture in a way that actually works.

The new collaboration features a chunky red sole and can be purchased in two different designs — black leather and camo suede. 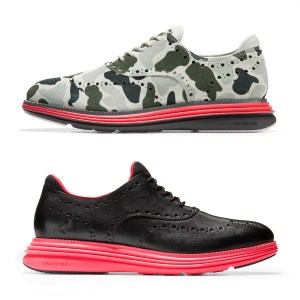 Cole Haan offered me the chance to try out their new wingtip Oxfords ahead of their July 9 release. And I’ll keep it real, I personally opted for black leather because first and foremost, I do have the occasional sweet spot for leather. Aside from that, I find these perfect for the kind of guy who wants to slightly take his feet away from his comfort zone without looking too flashy, and I’m for sure that guy. 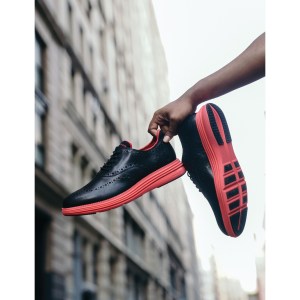 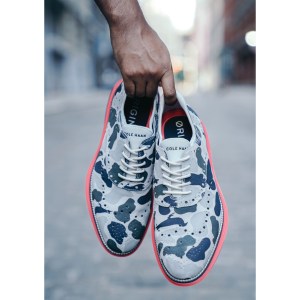 The black leather exudes a sort of monotone color pop in the best way possible. Meaning, of course, the pigeon pink wraparound absolutely will get you some head turns and compliments, but they still have that black shoe “slip into the background” kind of comfort.

On the other hand, OriginalGrand Ultra’s camo suede takes the exact opposite approach. Unlike traditional camo, these babies want to be seen. They’re perfect for the kind of guy that can pull together a handsome look in his sleep, and as much as I’d like to be that guy, I know this pattern and coloration would make me late for work every time I want to wear them.

Upon first slip-on, I low-key felt like the much hairier version of Cinderella for a hot second. They fit like a damn glove, which really took me by surprise. Most of the time I feel like I’m wrestling my feet into shoes, but there’s an internal sock-like stretch bootie right at the wingtip’s entrance that allows your foot to glide in without fail. Kind of like those Balenciaga’s that look like socks, just on the inside.

Once your foot is inside, you’re welcomed with a cushy padded tongue that needs no classic break-in. I walked around two miles all over Brooklyn in these on the first day I got them, and on a comfort level, it felt like I’d had them for months. That’s hardly a surprise, as Cole Haan included extra GRANDFØAM cushioning for the collaboration with Staple Pigeon. That means these might just be the most comfortable dress shoes you’ve ever worn.

The shoes are the latest evolution in the OriginalGrande line, which has already given us the stylish ZeroGrande Oxfords. After parting ways with Nike in 2012, Cole Haan introduced its OriginalGrande line of Oxfords, which provides the cushioning and sole of athletic footwear with the dressy upper of a leather wingtip. Now, whether SPY is writing about the best white sneakers or the best dress shoes, you’ll find a Grande wingtip on the list.

The Cole Haan x Staple Pigeon ØriginalGrand Ultra Collection is available now at Cole Haan for just $180. Try them out and evolve your style into something you never thought it could become.

Trendy to Traditional: The Best Men’s Dress Shoes Right Now and How to Find Your Perfect Pair