* The style is strong with this one
* Vader-themed details are subtle, unlike the Death Star
* Just the thing to go from Tie Fighter to black tie

You’ve heard the old line about dressing for the job you want, rather than the one you’ve got, but this subtly Darth Vader-themed blazer lets you take that idea to a whole new galaxy. It lets you show up to the function like your admiral has failed you for the last time, and as though you and your estranged son will actually meet again one day, one day soon. For those inclined to the dark side of style, this black satin-lapel single breasted blazer may just bring balance to the force in your wardrobe. While not immediately obvious as a costume piece, it has plenty of subtle touches Star Wars fans will recognize. Not only is it as dark as the dark side, but features a small embroidered nod to Vader’s ‘control panel’ on the left breast pocket. Not only that, but the lining features the pattern you might recall as the interior lighting of the Death Star. Plus, the buttons have that Imperial “cog” design. If there’s ever a such thing as a black tie function that’s also Star Wars themed, this ThinkGeek exclusive is practically the dress code. And if you’re in a place where no one has heard of Star Wars (does such a place exist? Maybe only, ironically, on another planet, but anyway) it’s still a nice blazer, thanks to the understated nature of the cut-and-sew Imperial details. 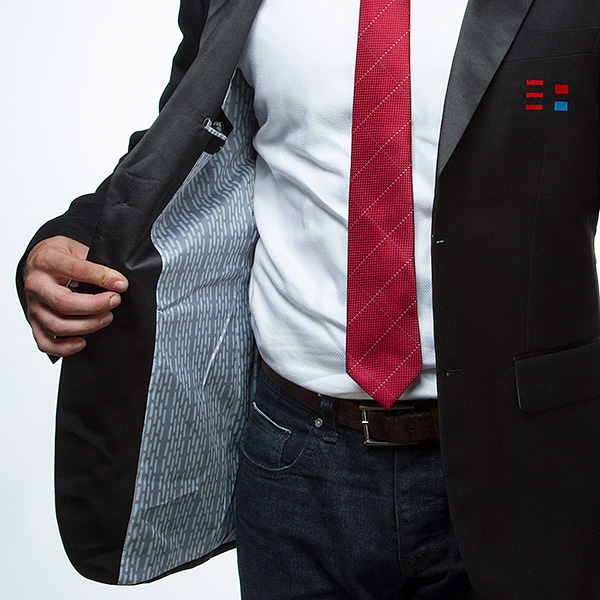 It may not be the Emperor’s new clothes, thankfully– no one wants to see that– but this Darth Vader jacket is formal wear befitting a Sith Lord. And fear not, you don’t have to lose your arms and legs in a lava flow in order to earn the right to wear it. You just have to have some keen-eyed Star Wars fans at the reception to give you a nod of appreciation. Unlike Vader’s “more machine than man” suit, this sharp blazer comes in a pretty wide range of sizes, too.