Logomania. The trend where there’s an urge to wear a designer’s logo all over your body, or over certain body parts, is here to stay. There’s a plethora of designers and an equal number of designer t-shirts for men out there, making it easy to (a) stay on-trend and (b) snag an affordable designer item.

That’s the great thing about designer t-shirts for men; fashionwise, they let you kill two birds with one stone. When you delve into the world of designer clothing, many things have a price tag you might quietly gag at, while designer t-shirts are a more affordable, and let’s be honest, easier way to sport a designer item. T-shirts, as a rule, can be dressed up or down depending on what you wear them with. Take a solid color t-shirt; throw a blazer or chore jacket over it, pair it with, oh say, chinos or dark denim, and nice shoes and you’re good to go anywhere, even work. Now, add a designer t-shirt into the mix, and you’ve upped your style ante. Designer t-shirts for men, as opposed to the basic t-shirt, are usually made from a higher grade of cotton, the stitching is nicer, the cut fits better, so in the end, you’re getting a t-shirt that really is a designer item.

Olivier Rousteing, like Demna Gvasalia, shook all the cobwebs and fustiness out of Balmain’s designs and turned the company into one of the priciest designer brands around. Despite the (sometimes) eye-watering cost of some items, or maybe because of it, Balmain is often on the top of “must-have, must-own” lists of fashiony people all over. Most of the brand’s tees are a the logo rendered in a variety of fonts; this multicolored shield logo with pops of color helps you make an entrance. It’s got relaxed shoulders and a slightly loose fit. 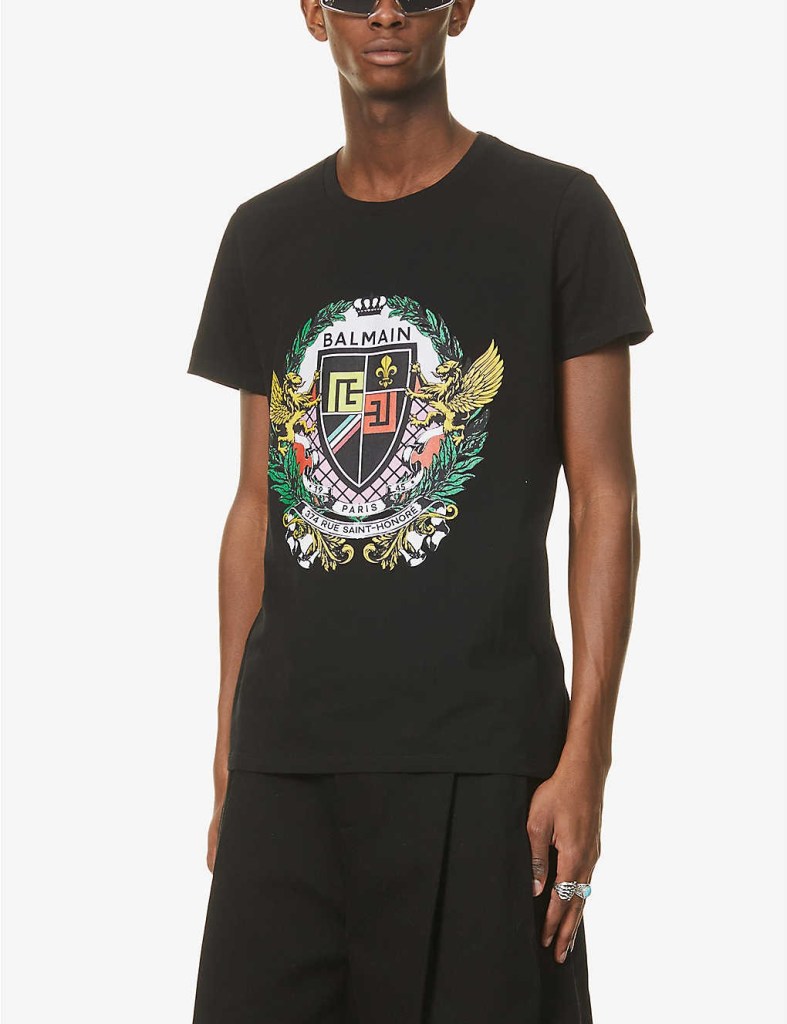 At one point, Marc Jacobs had so many diffusion lines, Marc by Marc Jacobs, Marc for Marc by Marc Jacobs, and ancillary products like pens, plastic tchotchkes and stuff that it ended up watering down his high-end line, Marc Jacobs. In response to oversaturating the market, he ended up shuttering most of his secondary and tertiary lines to concentrate on his luxury line. And whilst this was all going on, he was also Louis Vuitton’s Creative Director. Jacobs does two things well: reinvention and mining previous decades for inspiration. Heaven by Marc Jacobs is his new diffusion line whose items are influenced by 90s Grunge and 80s kitsch.

This black cotton t-shirt, which showcases Shana Saghedi-Ray’s artwork, is part of Jacob’s Heaven capsule collection (diffusion line). It’s a classic cut tee that would look cool peeping out from a blazer. 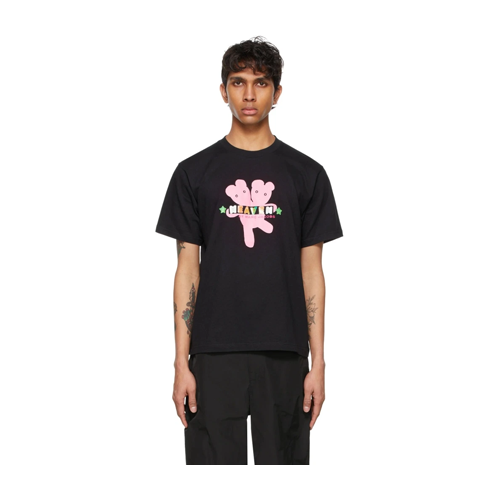 Photographer and designer Francesco Ragazzi worked with luxury cold weather brand Moncler before striking out on his own. Palm Angels is a skate and streetwear-inspired brand with a somewhat moderate price tag for a luxury line. Designs range from classic “logomania” styles to somewhat snarky tweeness. While the company has been around since 2015, it more or less exploded into pop culture when Adam Sandler was dressed from head-to-toe in it in Netflix’s Murder Mystery.

Palm Angels teamed up with O.G designer Missoni and created a capsule collection that includes knitted track separates, tees, jackets and accessories. This regular fit tee is wearing two designers on teee. Made in cotton, try it with track pants and a chore jacket. 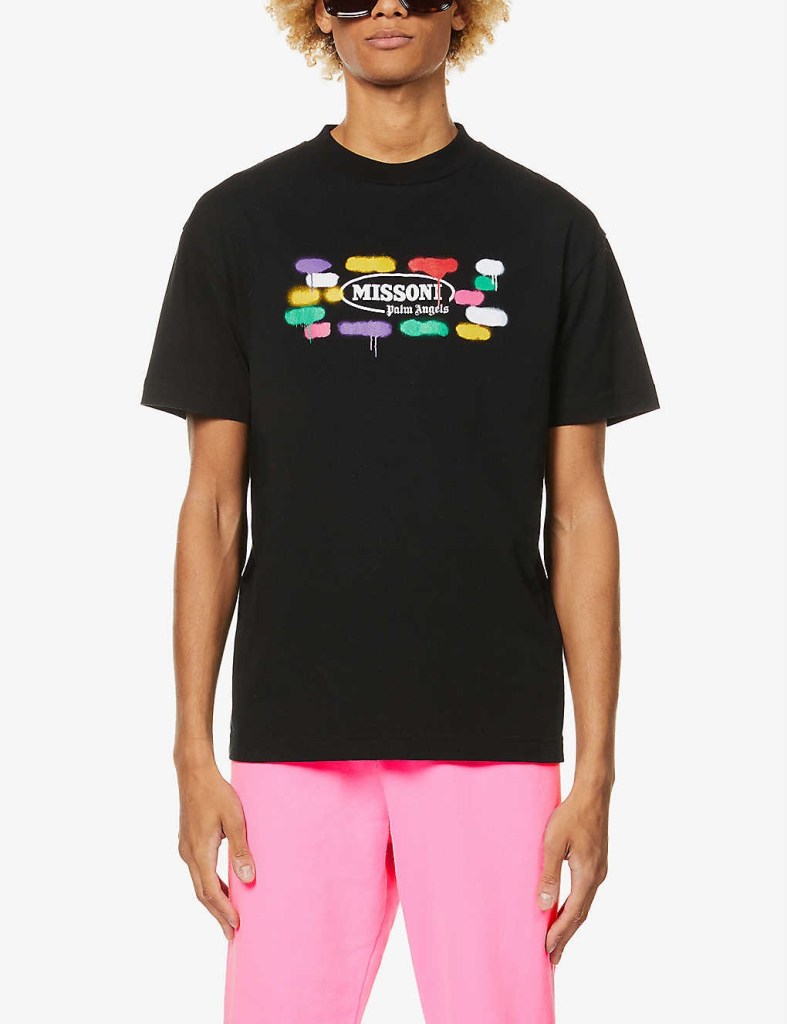 Balenciaga was a long-established fashion brand that had become somewhat staid until Demna Gvasalia came along and shook things up. These days, if you want to know what the next and biggest fashion trends will be, see what Gvasalia’s created for this fashion house. Innovative, somewhat futuristic with a touch of utility, Gvasalia’s designs seemingly plumb through one’s unconscious to find things that people were craving yet didn’t know existed. While some call Gvasalia, and in turn, Balenciaga, high-end streetwear, it is and at the same time, it’s not. Between the fabrication, construction and inspiration, the man who co-founded Vetements elevates it into something totally unique.

Gvasalia often plays with pop culture icons, sometimes utilizing the images with a touch of tongue-in-cheek humor. For this medium fit T-shirt, he’s emblazoned the chest with a late 60s comic book image of The Hulk. 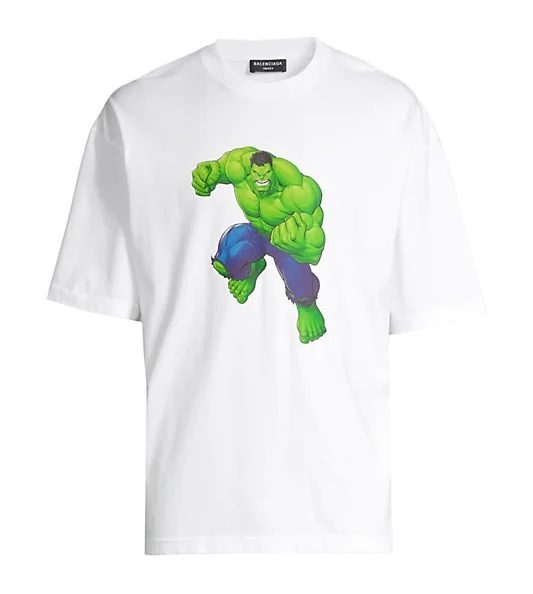 One of the OG’s of American fashion designers and progenitors of American logomania, Ralph Lauren’s symbols have permeated pop culture. See a tee with a polo player or teddy bear and you immediately know what brand you’re looking at. Much like everyone is seemingly born knowing the lyrics to every Beatles song, Ralph Lauren has become enmeshed into the world’s closets and drawers. Heck, even pets aren’t immune to the brand. Known for updating classic yet boring silhouettes into fancy wares via detailing and fabrication, for the most part, Ralph Lauren’s logo wear takes itself a tad too seriously. However, his clothing is nigh-indestructible. Buy a Polo Ralph Lauren t-shirt today, and it’ll still look good 20 years from now. 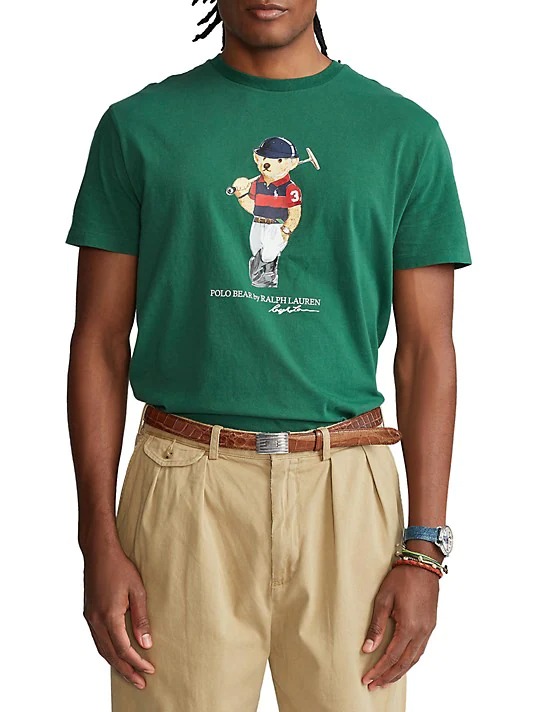 It’s as if Virgil Abloh was Athena Parthene; springing full-grown from nowhere into a coveted designer. In 2013, it appeared that half of America was wearing his tape measure-inspired belts. That was the same year that Abloh launched his Milan-based luxury streetwear label Off-White. Before that, he interned at Fendi at the same time as Kanye West, and through that internship, they two worked together on various projects. Off-White’s modernized Bahaus’ philosophy of the art of the every day, and through Abloh’s designs, simple items like paperclips are turned into high-end accessories. These days, Abloh splits his time between his label and working as creative director for Louis Vuitton’s menswear line.

Arrows have been the brand’s hallmarks since its inception and the crossed arrows have often stood in as the brand’s logo. For this tee, they’ve been done in a purple ombre that takes over the entire back of the shirt. 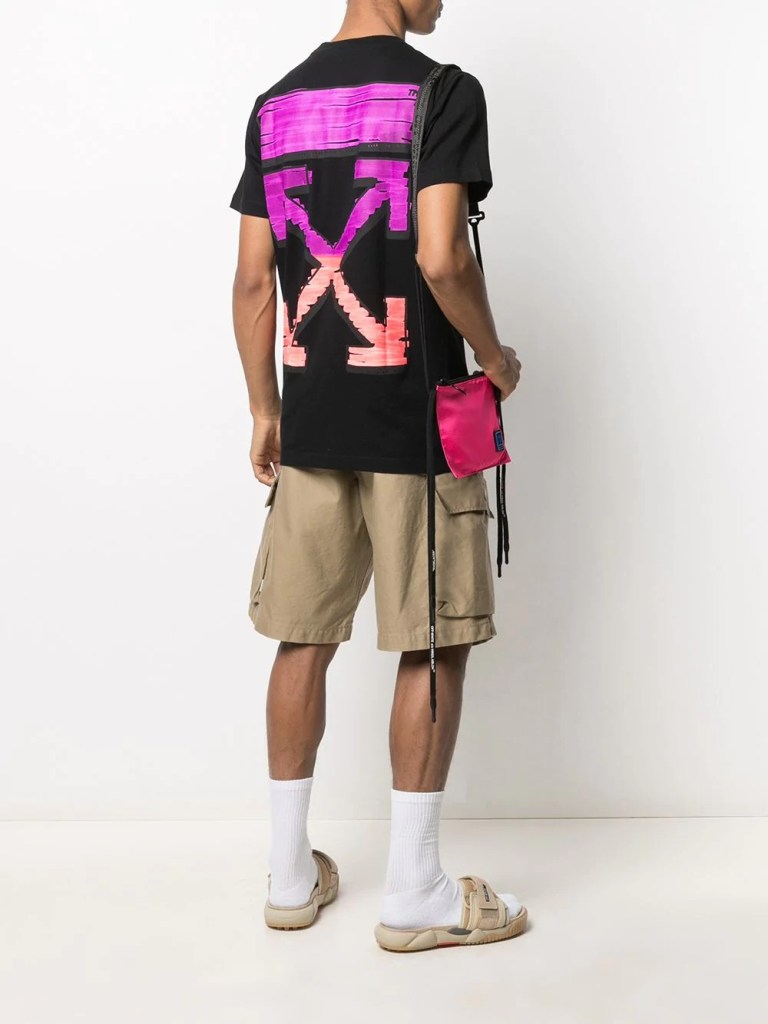 It’s a little freaky to think that Domenico Dolce and Stefano’s Dolce & Gabbana design house has been around since 1985. Five years later they launched their menswear line, and the label has grown into a fashion stalwart and has survived numeroous contoversies. Known for their use of vibrant colors and prints, as well as their deep and abiding love for leopard prints.

Pre-order their new Pre-Fall oversized tee that has so many colors used it could be considered a neutral—because it’ll go with everything.Using this season’s oversized silhouette, this cotton t-shirt has the designer’s logo discreetly placed on one side. 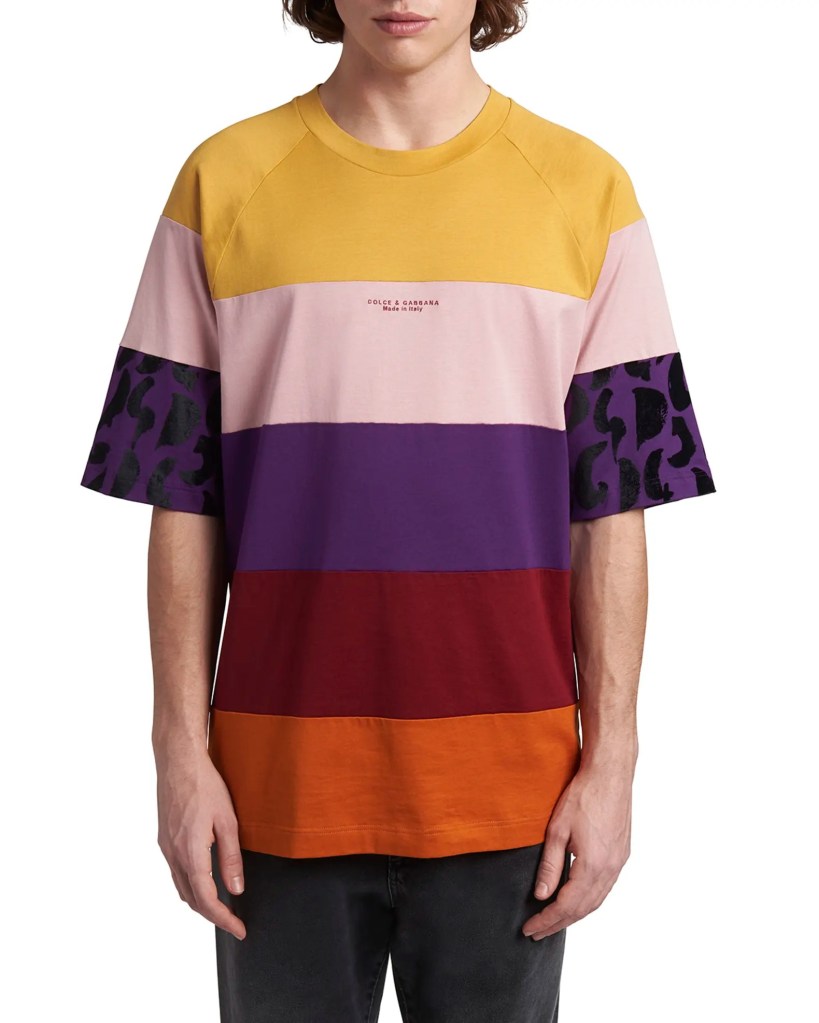 Rick Owens has always been an avant-garde fashion designer whose Parisian fashion shows have caused many a spectator to wonder what is waltzing down the runway. Elongated and sometimes appearing not to care about human physiology, Owens’s designs have often been repellent and compelling at the same time. All that changed with one TV show. Dan Levy often wore Rick Owens’ (the wearable ones at least) creations throughout Schitt’s Creek run. That turned the designer from one that was mainly known to the cognoscenti to becoming popular. DRKSHDW is the designer’s new accessible and wearable line of clothing meant for the everyday. The price points of the diffusion brand are gentler than his namesake line, and frankly, easier to pair up with what one already owns.

Using this season’s oversized silhouette, this cotton t-shirt has the designer’s logo discreetly placed on one side. 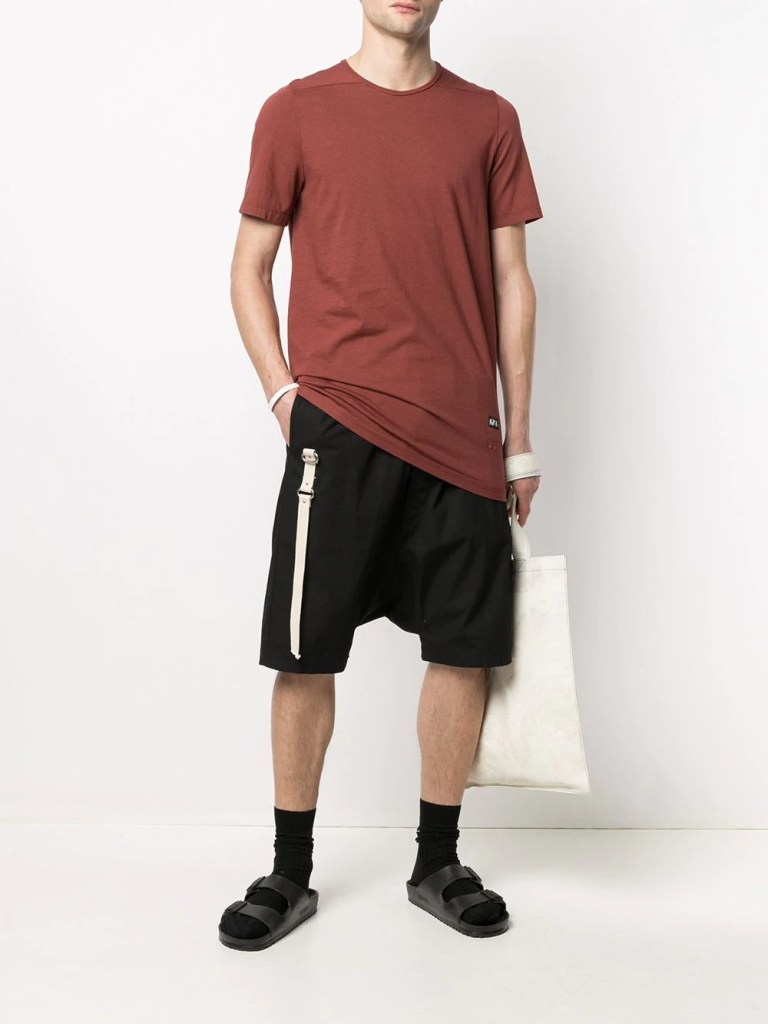 What can be said about Gucci that’s not been said before? The design house has been consistently mega hot for the past few years, ever since Alessandro Michele took over as Creative Director. With a movie about the Gucci family coming out shortly, interest in the brand; iconic patterns and new offerings alike are going to be on everyone’s radar.

Opt for Pre-Fall fun in their pre-washed and distressed with tiny holes, classic Gucci emblem T-shirt. You’ll see that logo a lot in “The House of Gucci” movie with Lady Gaga and Adam Driver. 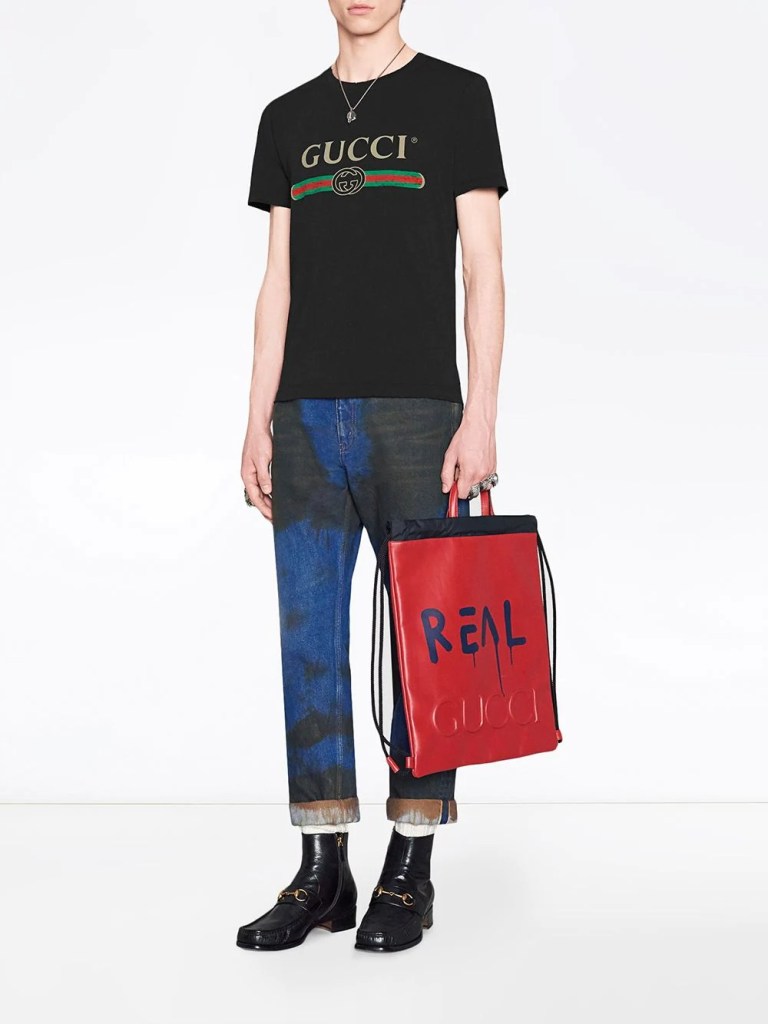 Back in 1945, Céline opened its doors as an upscale children’s shoe collection. In 1960, they expanded their creations to womenswear and fine leather goods. It wasn’t until Hedi Slimane came onboard as Creative Director that they kicked off their menswear collections.  Slimane has been credited with revitalizing both Saint Laurent and Dior Homme; both trend-setting menswear fashion lines. Slimane is known for slim cut (almost painfully so) blazers and pants. His formal menswear styles are a melange of Heroin Chic, luxury and louche. His Fall/Winter 2021/22 show, held at Chambord Castle has looks that range from Medieval princling to modern Goth and everything in between.

Up your collection of souvenir tees with this neon-hued tee from Céline Homme. Using gothic font, a nice tie-in to the fall collection, this tee even has the name and date of the fashion show on its front. It’s cotton jersey, and slightly oversized. 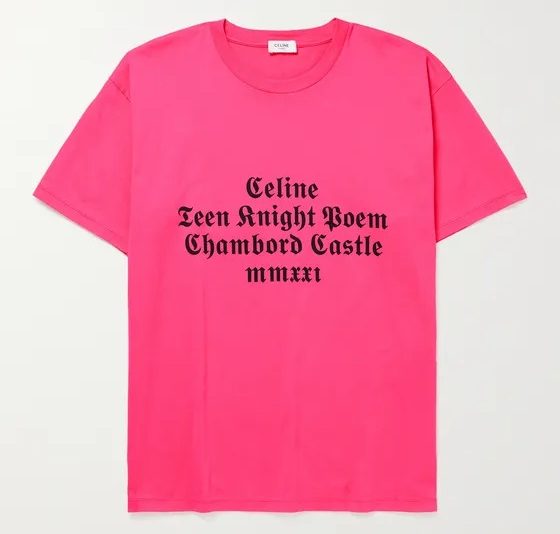 Model, movie producer and fashion designer, Tom Ford reinvented Gucci back in the late 90s from boring to sexy. Ford has created fragrances for men and women, a cosmetic and skincare line. One could literally get dressed from head-to-toe in Tom Ford. His menswear line encompasses socks, underwear, clothing, and accessories. Always sleek and well-crafted, his stuff is the perfect costume for the movie of your life. As far as designer t-shirts for men go, this one is an accessible entry into his landscape. Ford understands that while Logomania is here to stay for another season or two, this t-shirt, with its discreetly embroidered monogram at the bottom, lets the wearer pair it with more than jeans. 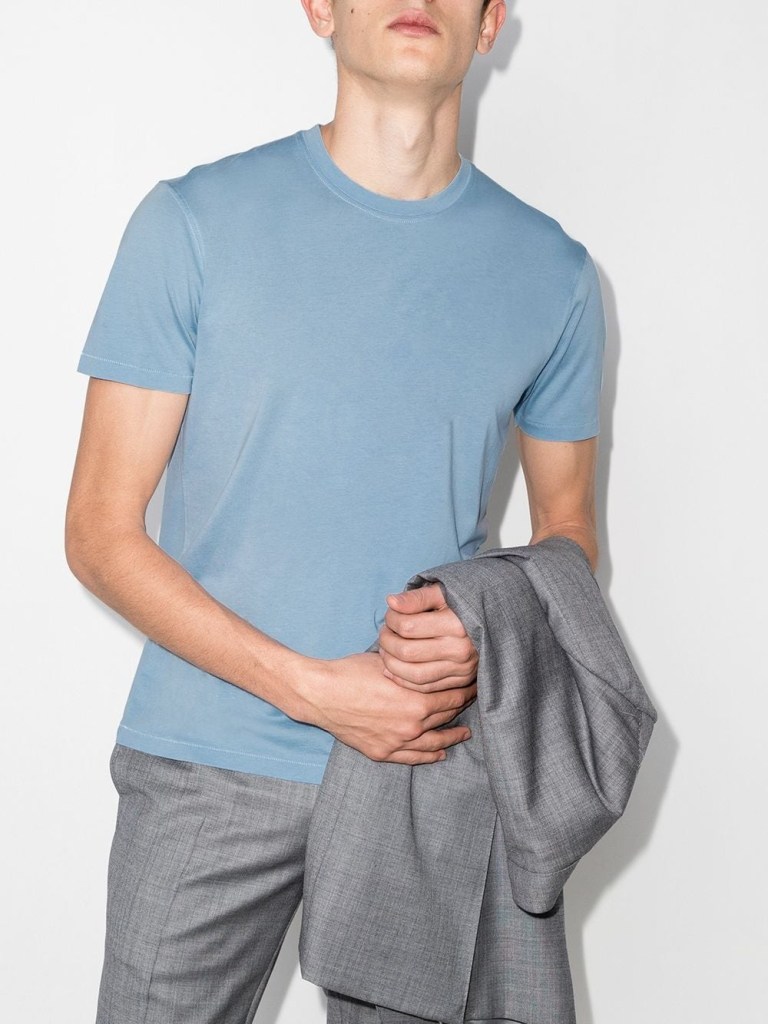 Marcus Lemonis, the guy who fixes up failing businesses on TVs The Profit, wears at least, seriously, one Comme des Garçons Play item per episode. Walk down the street, and you’ll be able to spot their Converse collab sneaker. The brand was created in 1969 by Rei Kawakubo in Tokyo, and a few years later they moved to Paris. While Commes des Garçons is avant-garde, boundary-breaking and outre, their diffusion line with its heart has always been affordable, streetwear worthy, and has a gentle sense of humor. The brand is teaming up with both Nike and Mikimoto for limited edition collabs.

Co-founded by Demna Gvasalia, the brand was inspired by the European club scene, music and nightlife. As the brand became popular it also courted controversy as some critics felt that there were designs that seemingly promoted drug use. As with any designer or brand, the more mainstream you become, the more homogenized, or should we say, assimilated into pop culture, the less one gives a brand side-eye. To this date, Vetements has collaborated with 18 other brands for capsule collections. Brands include Alpha Industries, Carhartt. Dr. Martens, Reebok and even Juicy Couture. 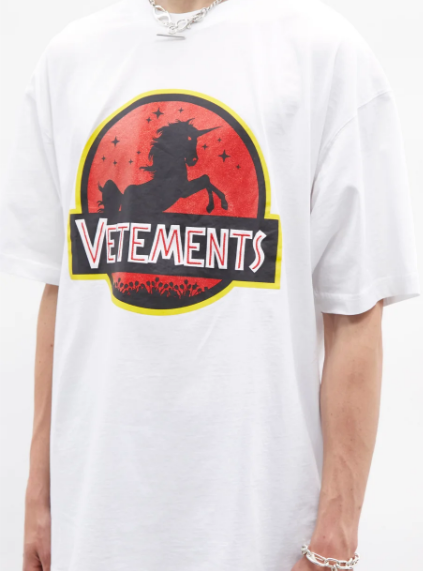 In 1969 Givenchy created their menswear collection, aptly named “Givenchy Gentlemen.” The menswear line did well for years, but had a spotty fashion show schedule. It wasn’t until Claire Wright Keller (2017-2020), the then creative director for the fashion house that an effort was made to bring back men’s fashion shows in 2019. After Keller left, Ricardo Tisci took over the lead as creative director. During his tenure, there were lush, gothic, and dramatic influences in his pieces. This oversized T-shirt, with its Gothic imaginings is an excellent example of his aesthetic. 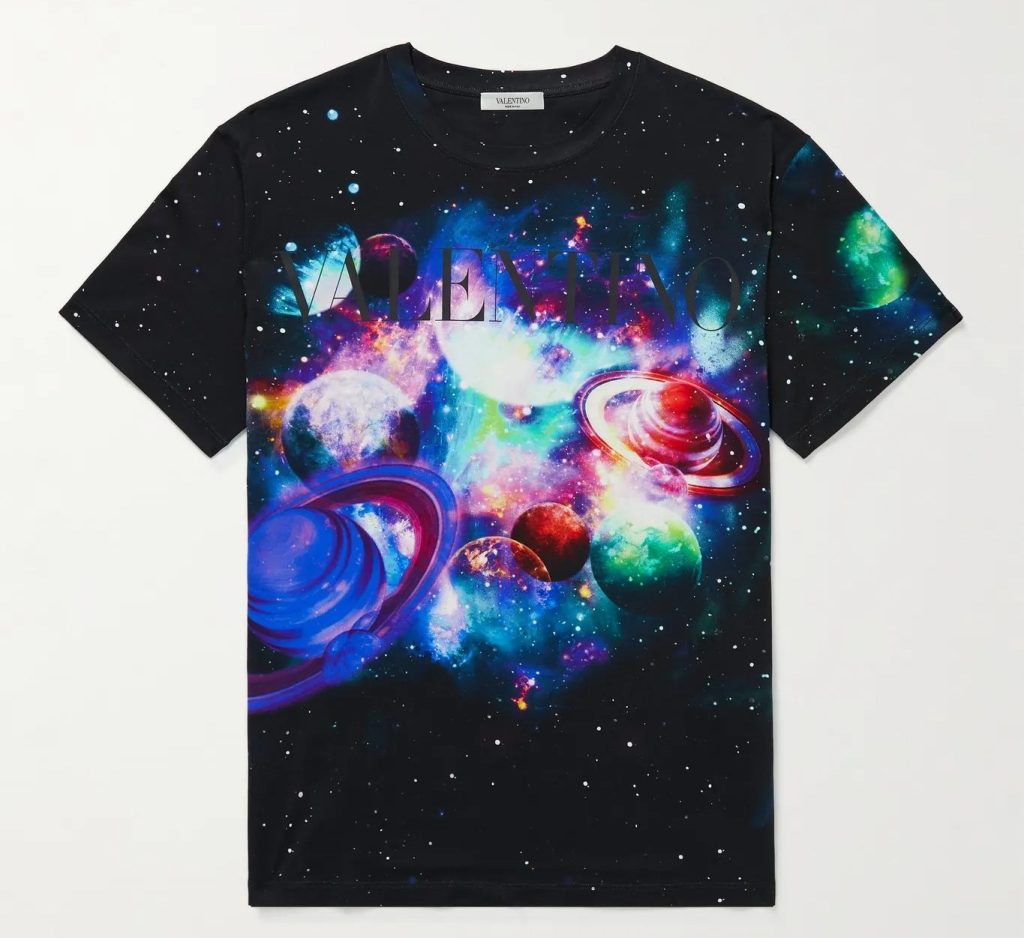 Headed by Hedi Slimane, Saint Laurent menswear heavily influenced menswear globally through its use of fabrication, silhouettes an details. Anthony Vaccarello took over creative directorship of the venerated fashion house in 2016, and the company once again pivoted its aesthetics, Vacarello’s known for slick, modern designs that combine high art and function.  His class cut camo tee stradles both utilitarian and streetwear styling 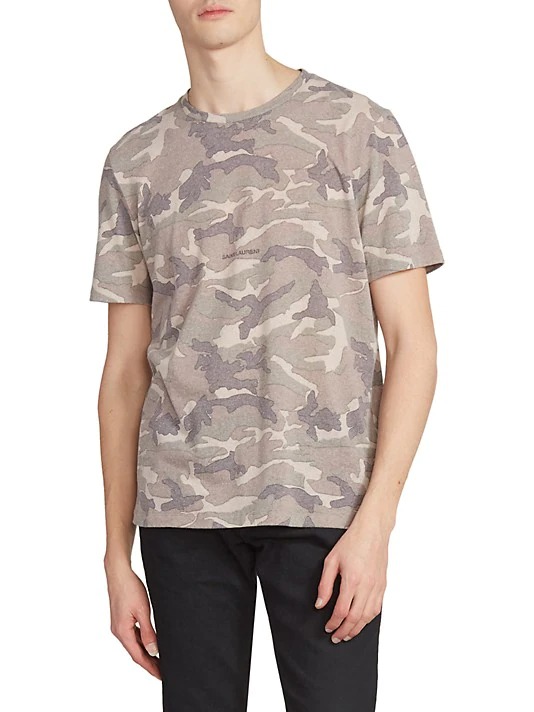