Legendary designer Diane Von Furstenberg arrived in New York in the early 1970s as an unknown designer, with a suitcase containing several of her now-iconic silk jersey wrap dresses, which she manufactured out of a friend’s factory in Italy. It didn’t take long for DVF to fit right in the NYC crowd with her alluring sense of style. During her it-girl days of socializing with legendary pop artist Andy Warhol and other Studio 54 regulars, Von Furstenberg’s classic wrap dress became a huge hit among fellow fashionistas, artists, and celebrities.

Her ability to dress the female body from the perspective of a woman (and flatter a wide variety of body types) launched her career and cemented her future in the fashion industry. As a pioneer of feminist fashion and an iconic designer regardless of gender considerations, DVF continues to be recognized as one the most acclaimed designers of all time. Her signature wrap dress remains a timeless wardrobe staple for chic women around the globe. 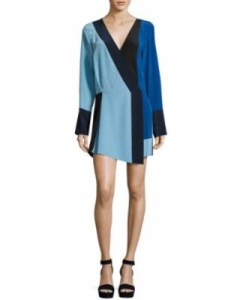 This crossover dress keeps DVF’s signature wrap style body, while adding a modern touch with just a hint of flirtiness due to its shorter hem and draped neckline. The crepe fabric hangs beautifully over the body, with an ultra-flattering dropped waist to balance proportions. The mini length shows off a little more skin compared to her classic wrap dress, making it feel younger and a bit sexier. 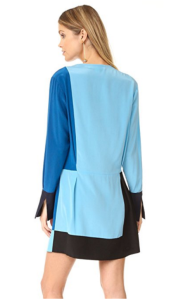 Steering away from her classic prints, this dress features color-blocked shades of navy and robin’s egg blue, adding a mod feel, reminiscent of the 1960s, to the updated silhouette. While Von Furstenberg is certainly no stranger to some of the Swinging Sixties biggest stars, the sartorial reference is a departure from her distinctive 70cs-inspired template and her inclination toward a tailored fit. The Silk Crossover Mini Dress is a standout piece that will make a great addition to your collection.