This year, Dickies is celebrating its 100th anniversary. It couldn’t have come at a more fitting time, as the workwear trend shows no signs of slowing down. The Fort Worth-based company was founded in 1922, meaning it’s been turning out workwear essentials like the Eisenhower jacket and the 874 work pants for a century.

To celebrate its centennial, the brand is releasing a 100-year collection for men and women. It’s less a greatest hits album than it is a remix; Dickies staple pieces are revamped in updated fits and all-cotton fabrics. The collection launched early last month and includes stylish pieces for both men and women.

Dickies’ workwear bona fides make it a fitting competitor to Carhartt, the Michigan-based workwear brand that’s cemented itself among the ranks of downtown’s most stylish. In fact, the workwear trend has shown staying power even a decade after the #menswear heyday, and Dickies is arguably the brand of the moment. The 874 pants, in particular, have proven a popular alternative to denim because they can be easily dressed down with sneakers and graphic tees. Or you can lean into the look by wearing work boots and flannels. Either way, there’s no wrong way to rock Dickies right now.

And while Dickies are hard-wearing, you don’t have to pay much for that kind of durability; their 874 pants can be had for between 20 and 30 bucks. 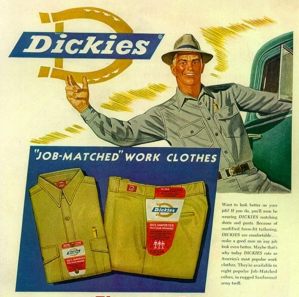 Dickies Through the Years

Dickies was started in 1922 by three family members and was originally called Williamson-Dickies Mfg. Co. The company specialized in bib overalls for workers. By the second World War, Dickies was tasked with producing military uniforms, cementing its legacy as a brand that makes tough clothes. And well before it was fashionable to wear matching sets among women and men, Dickies advertised matching work shirts and pant sets to be worn on the job as early as the 1950s. In postwar America, Dickies gradually expanded both its operations and fan base. Though it was associated with auto mechanics, Dickies’ fans came to include people whose preferred four-wheel vehicle was the skateboard.

In addition to skateboarding, Dickies were appropriated within hip-hop culture. Among the brand’s fans were rap icons NWA, who would wear patch pocket button-down shirts and matching pants with Nikes. It’s a look that’s plenty wearable today, which is owed to the fact that Dickies’ pants and shirts are incredibly simple. Compared with the rugged, khaki look of Carhartt, Dickies has generally had more of a clean, subtle look that just makes sense with a pair of clean white sneakers. The button-down pocket shirt is neither too casual nor too dressed up, while the 874 pant has a boxy-but-not-baggy fit that’s wearable for people who are still learning to let go of their slim jeans.

Dickies’ 100-year collection is broken up into denim, twill, headwear and graphic t-shirts, so you can buy the pieces from each subsection or mix and match as you see fit. The pieces are slightly more expensive than the average Dickies garment, though not outrageously so, seeing as this is a special collection.

Check out some of our top picks from Dickies’ 100-year collection.

Chore coats will always be in style, and even if they’re not, it’s hard to argue against the ample pockets you get with this work-inspired style. This jacket is cut from heavy, 100% cotton denim, and it has four pockets, including a secure chest pocket with a button. 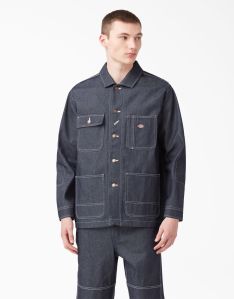 These remixed jeans feel both modern and classic. Like classic jeans, they’re made from 100% cotton, but these pants skip the traditional five-pocket design found on jeans and opt for side slash pockets, with an additional cargo pocket at the thigh. The pants have reinforced knees for durability. 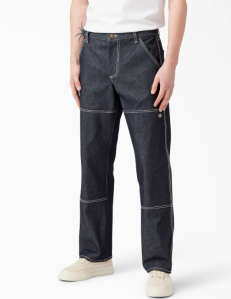 This durable work shirt is made from 100% cotton, cut from a wear-resistant twill. It has two button pockets on the chest, plus a slot for a pen. The chest pocket also features the classic horseshoe logo. 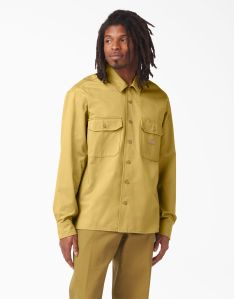 Go for a coordinating look and get the pants along with the shirt, which are also made from 100% cotton. The pants have a regular, relaxed fit for a more laid-back look. 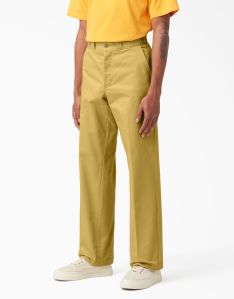 This Dickies T-shirt is cut from a blend of cotton and polyester, and it features a special edition logo on the chest pocket and a plain back. It’s available in black, white or gray. 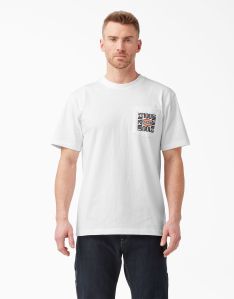 No outfit is complete without accessories. Top it all off with this logo beanie from Dickies, which features the limited edition centennial logo and is made from warm acrylic.