“Ask not what your country can do for you, but ask what you can do for your country.” It was JFK who famously uttered the phrase, but we think it’s time to re-work that famous idiom for the current Commander-in-Chief.

Donald Trump has been a lightning rod for controversy ever since he took office. And while we’re not the type of site to chime in on the political debates going on, we do have something to say about President Trump’s infamous hairstyle. To borrow loosely from Kennedy’s words, we’re asking what we can do, for the current president’s ‘do. 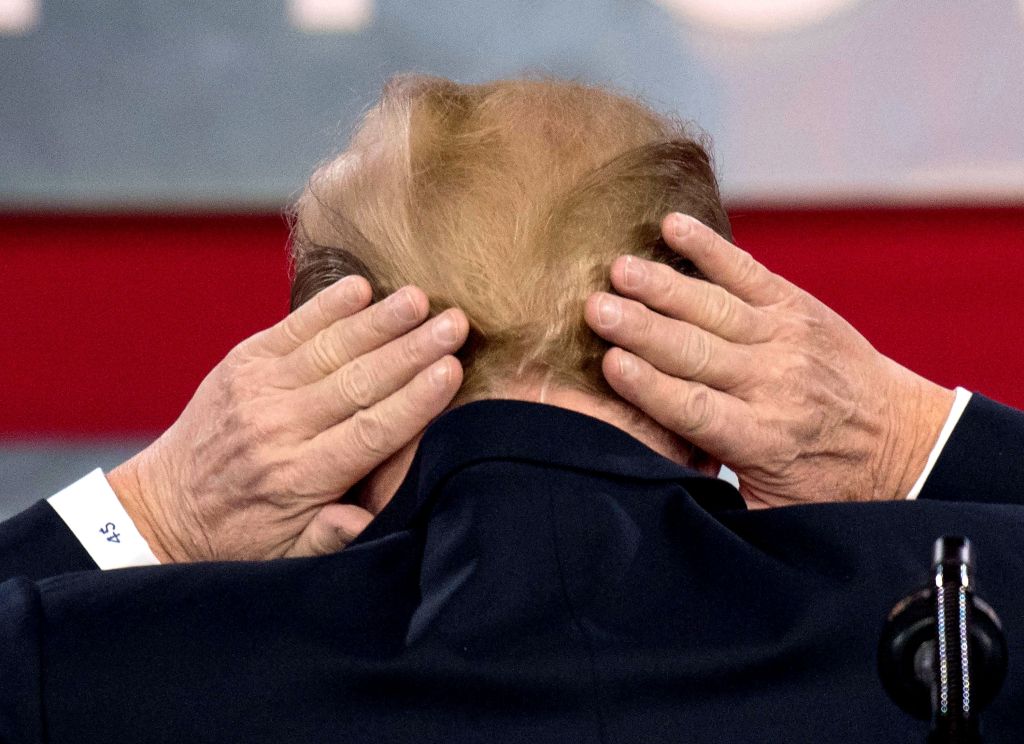 From the return of Queer Eye, to a surge in men’s specialty grooming products, there’s no better time to make a change when it comes to your hairstyle. Fire and Fury author, Michael Wolff, wrote that Ivanka Trump would routinely mock her father’s hair. “The color, she would point out to comical effect, was from a product called Just for Men,” Wolff writes. “Impatience resulted in Trump’s orange-blond hair color.”

President Trump even jokingly referenced his hair during a speech last week before the Conservative Political Action Conference, saying “I try like hell to hide that bald spot, folks.”

So we’re here to help. SPY has rounded up ten alternative hairstyles for Donald Trump to try. Each of these looks have proven to be winners for the stars that originated it, and we’re hoping one of them will be a winner for the President too. See our picks below, then scroll through to see all of our suggested hairstyles up close and personal. 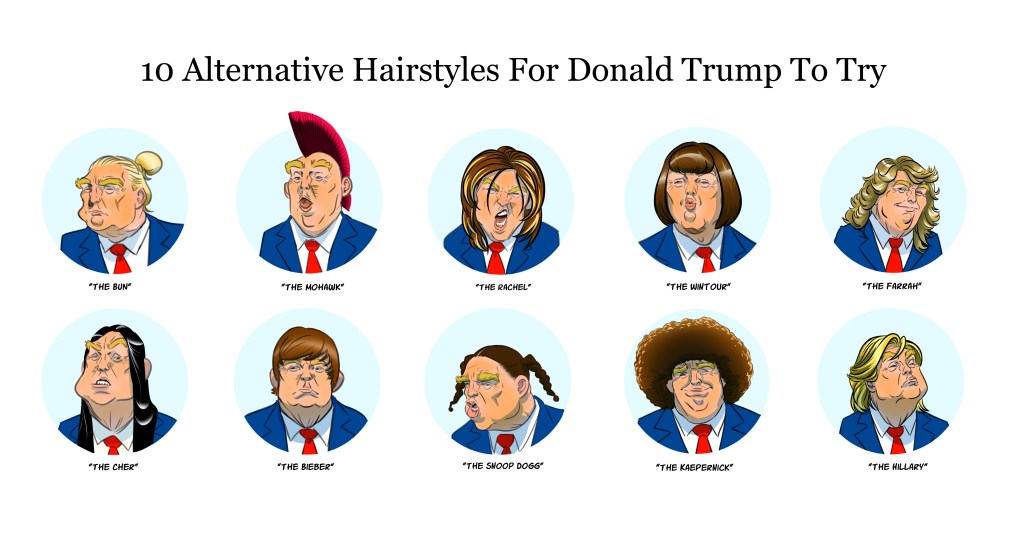 President Trump can easily achieve this look using a donut bun maker. A set like this one includes three “donuts” to pull your hair through, plus ponytail holder elastic bands, and bobby pins to help your bun stay firmly in place. Also: a bun is a great way to cover up that bald spot. 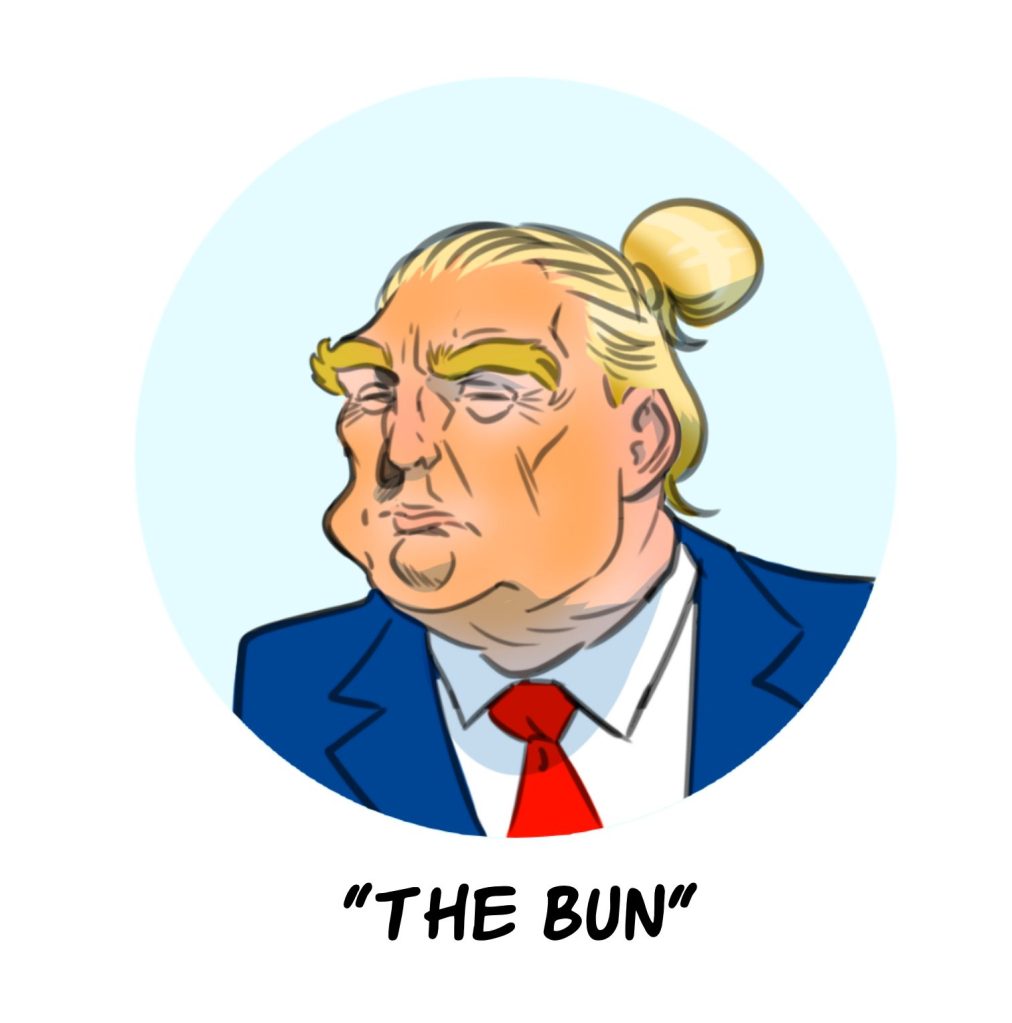 The President is going to need a lot of gel to get a mohawk, perfect for marching the streets with his supporters to fight back against the Antifa. Luckily for him — and the alt-right — Bed Head makes a “Hard Head Mohawk Gel” especially for this look. It dries quickly while defying gravity — great for a guy who seems to constantly defy the rules. 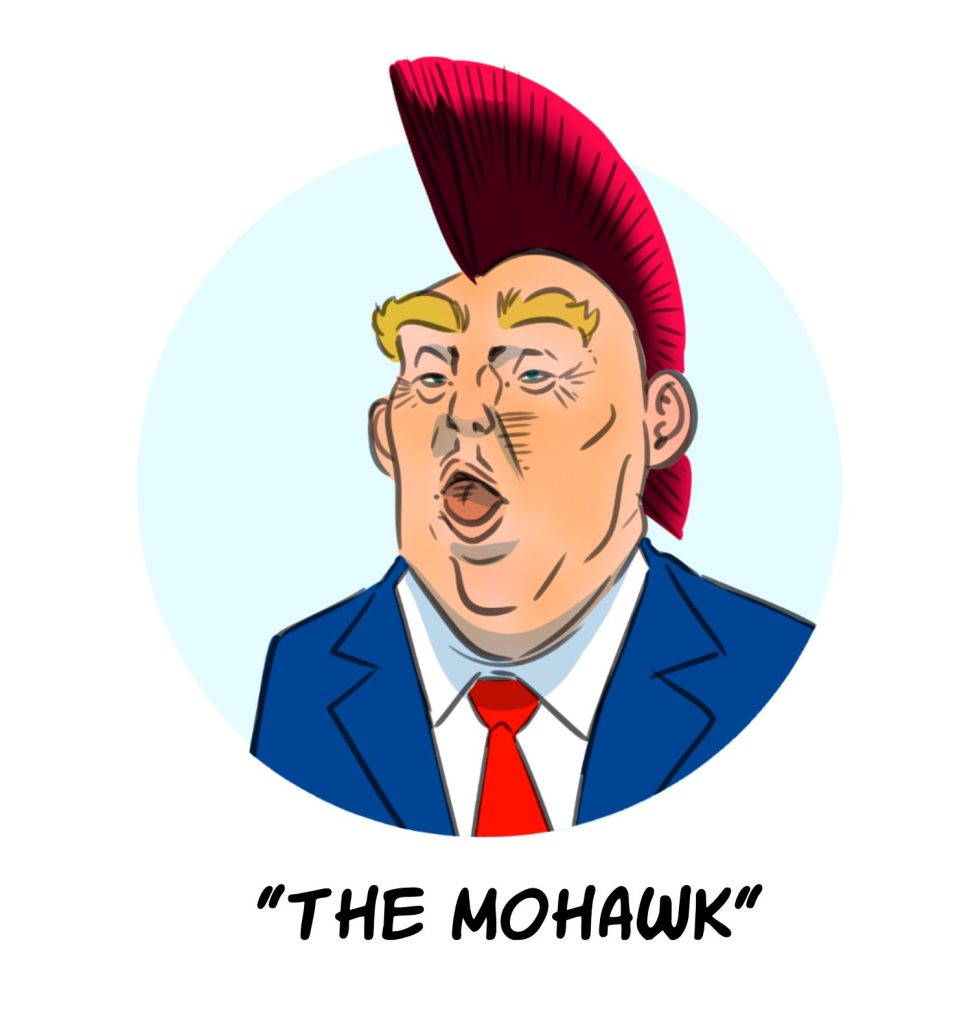 Jennifer Aniston single-handedly made this hairstyle famous — or was it the other way around? Either way, since Trump already fancies himself a celebrity, he’s going to need a celebrity cut. The “Rachel” made Aniston so popular, she even launched her own line of hair care products, called Living Proof. Use this dry shampoo to keep this look in place. 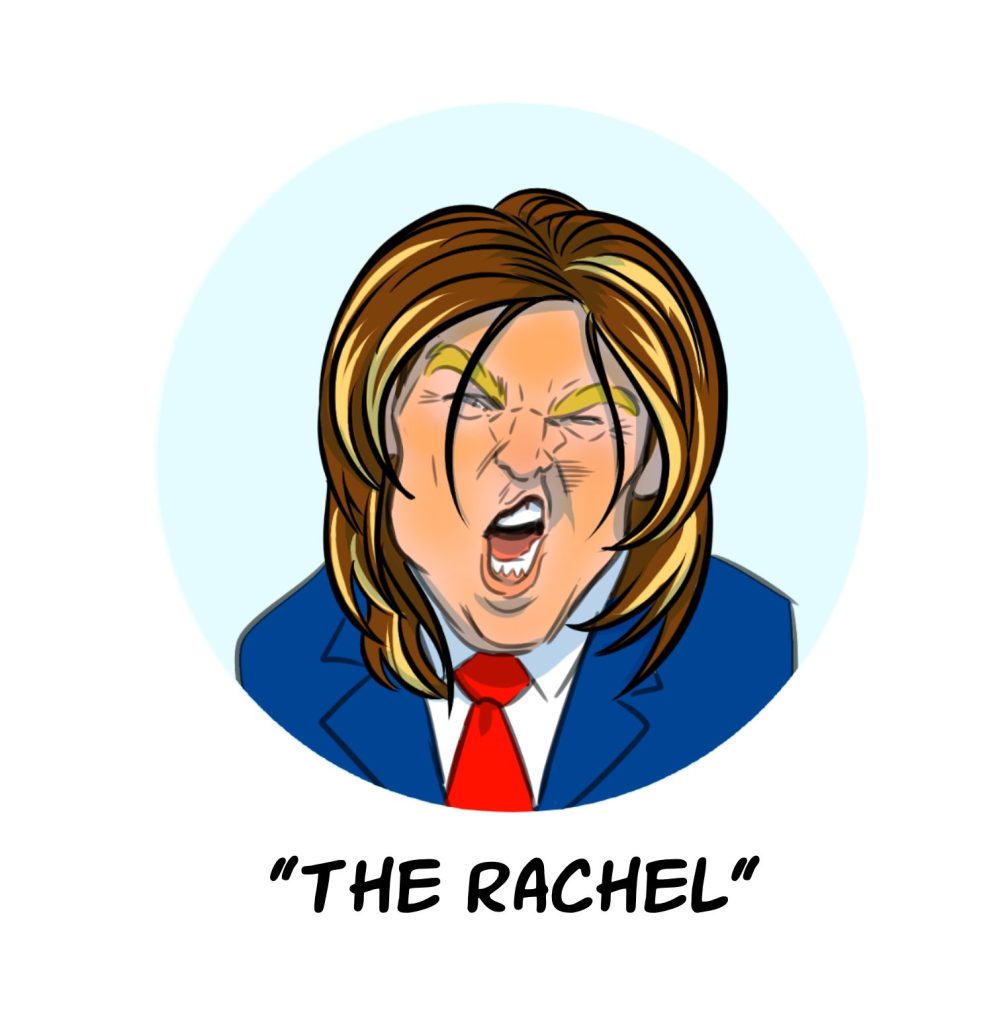 The most powerful man in the world could take some style cues from the most powerful woman in fashion. Vogue editor Anna Wintour has tracked trends for more than three decades, and yet, she’s chosen to keep her — now iconic — hairstyle the same for all these years. Trump would do well to consider a similar look — or at least flip through the pages of Vogue for some sartorial inspo. 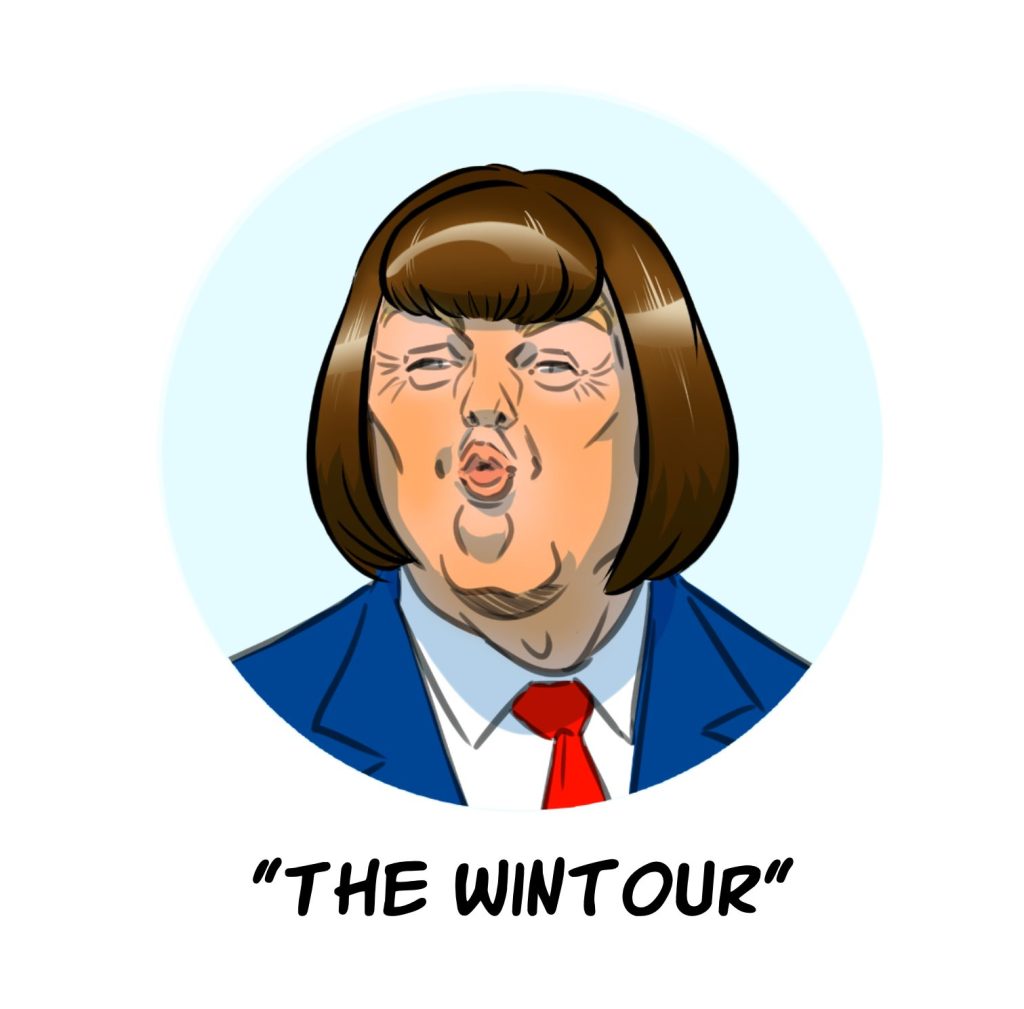 One Year Subscription to Vogue

Did Donald Trump ever date Farrah Fawcett? Trump’s ex-wife, Marla Maples, was reportedly close friends with Fawcett, and there were rumors that Trump asked Maples to change her hair to more closely resemble the Charlie’s Angels star. Fawcett’s famous feathered hairstyle is still one of the most iconic ‘dos today. Use rollers in multiple sizes to create natural bouncy curls or waves without damaging your hair. 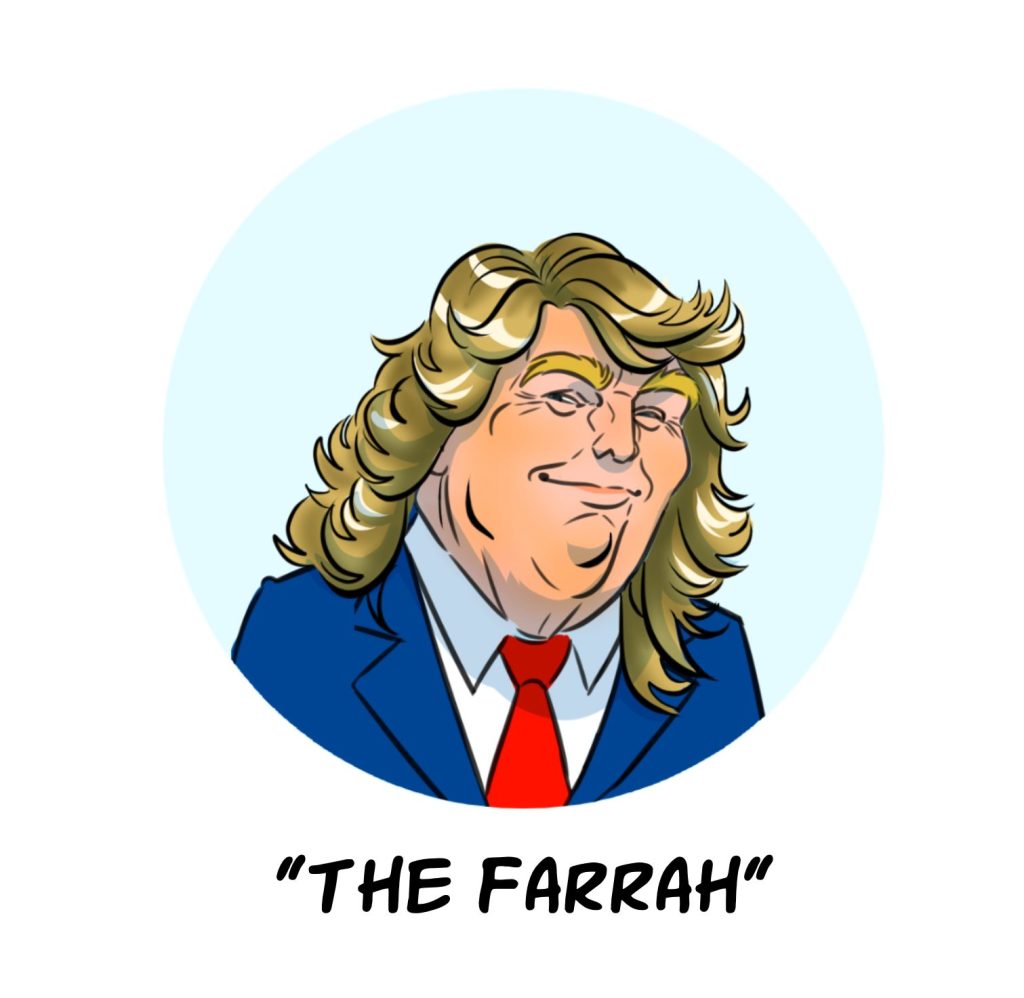 Cher has had no shortage of things to say (and Tweet) about the current president. May we present exhibit 1 (out of 100+):

Ok Daddy,,, I'll Do Whatever you want.. ,Just Make Me List & promise you'll
respect me in the morning pic.twitter.com/2ezsTSpJgl

Surprisingly, Trump didn’t take the bait — that time. But years earlier, when Cher came after the president’s hair, things got a little messy. After criticizing Macy’s for carrying the Donald Trump Collection (it’s now available on Amazon), Cher continued with several tweets against the then-businessman, including a crack calling Trump’s hair, “his rug.” Trump did not take too kindly to that, and fired off a retort on Twitter.

.@cher–I don’t wear a “rug”—it’s mine. And I promise not to talk about your massive plastic surgeries that didn’t work.

Can’t we just all get along? Our suggestion: meet in the middle.. like literally, a middle part, a la Cher’s iconic hairstyle. This HSI Professional Glider creates dramatic results on even the coarsest hair, to quickly straighten with minimal effort. Simple and fast, with micro sensors that prevent heat damage, so that the only things left to dry are the comebacks on Twitter. 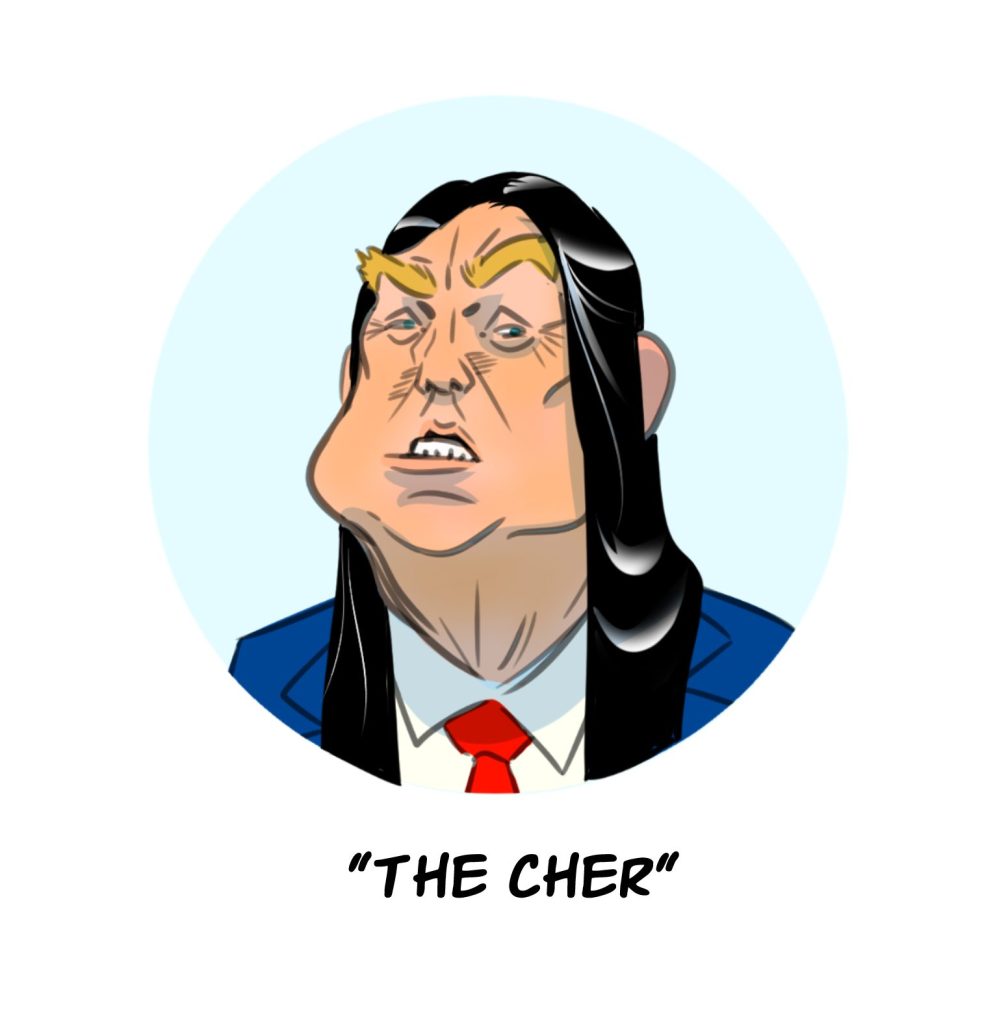 Look, in order to turn things around, Trump’s going to have to start with the young generation of voters. And while the recent Listening Session on school shootings didn’t exactly help his case, he can do no wrong if he aligns himself with the Biebs. The former wild child is now a church-goer (appeals to the evangelicals) and seemingly in a stable, monogamous relationship (appeals to conservatives). Is it too late now to say sorry? Not if Trump adopts the Bieber hairstyle. (Use a little grooming paste to keep it styled). 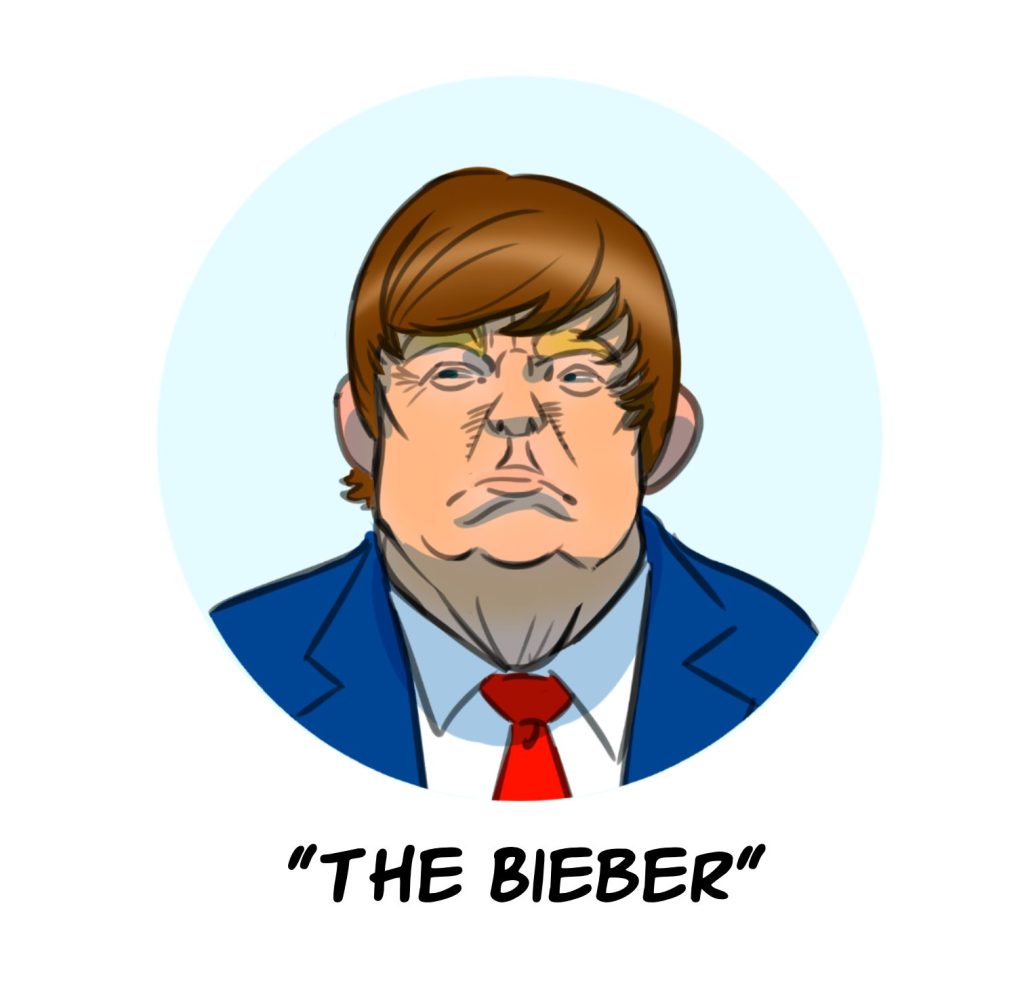 If Martha Stewart and Snoop Dogg can have a successful television show together, then there’s no reason why Trump can’t borrow from Snoop’s longtime hairstyle too… right? On second thought, Trump might have a better chance of making inroads with the African-American community if he didn’t steal Snoop’s braids. 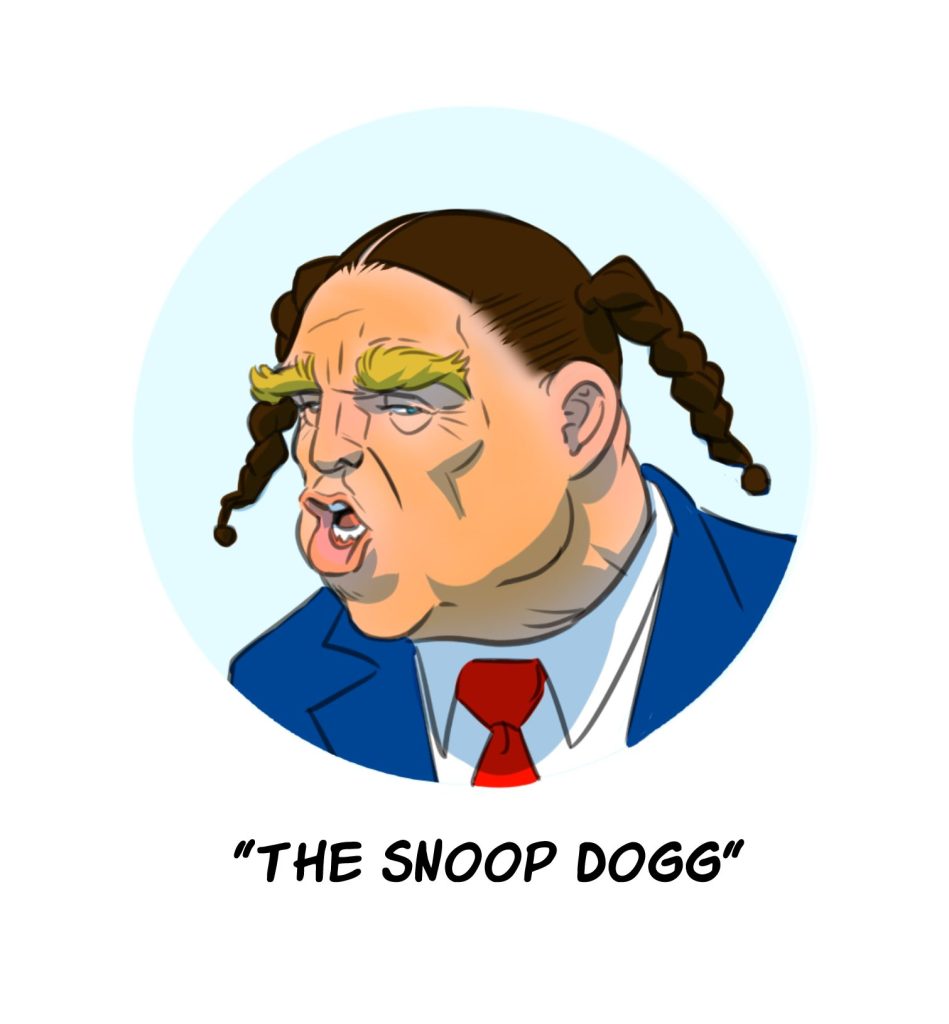 We’re just going to throw it out there: if Donald Trump really wants to quash his beef with Colin Kaepernick, there’s no better way — short of kneeling — than by adopting the Kap’s signature hairstyle. After all, if you don’t stand for something… wait, maybe this is also a bad idea. 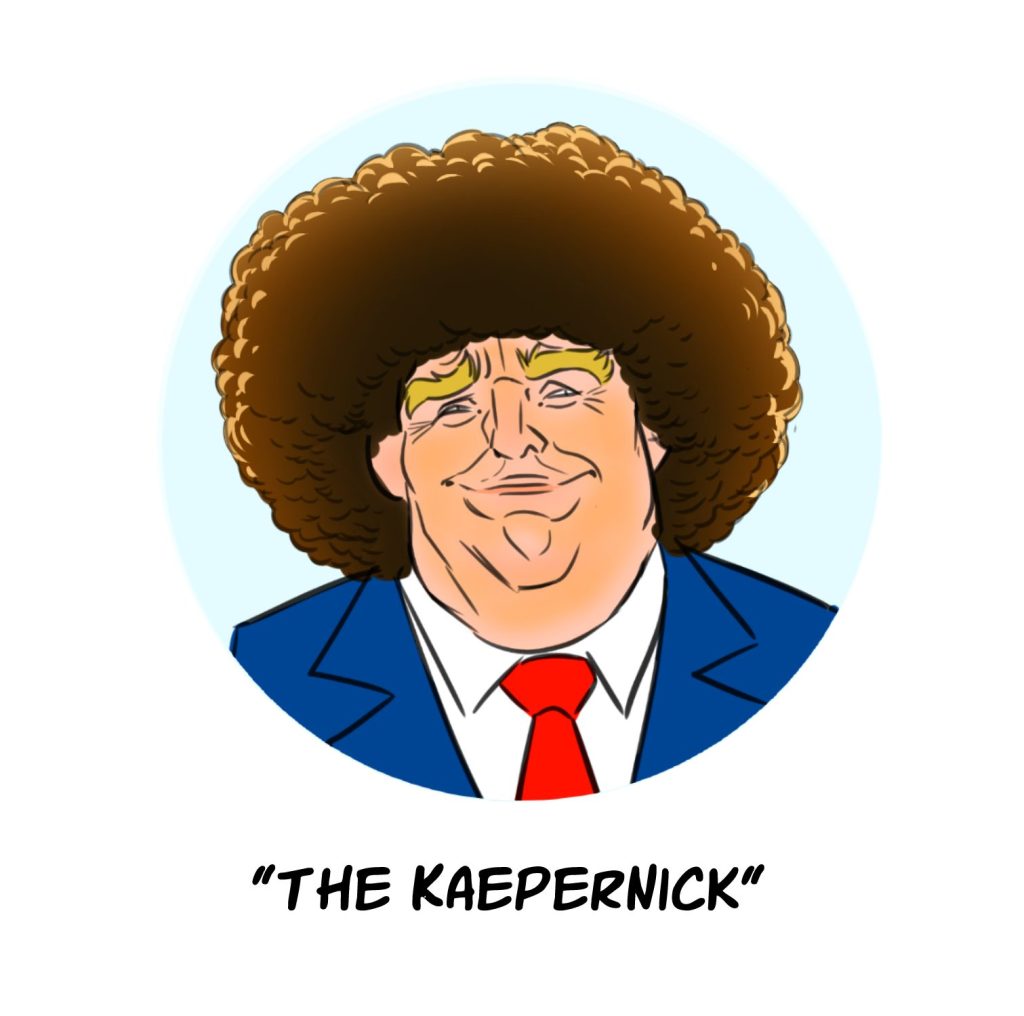 Two blondes walk into a presidential campaign and… well, you already know how this story ends. Still, Trump could go a long way towards bridging the gap between political parties by styling his Just For Men comb-over into more of a Hillary-inspired bob. It’s really just parting your hair differently — and it’s easier than parting the Senate floor. Just make sure your hair color and length is even — on both sides. 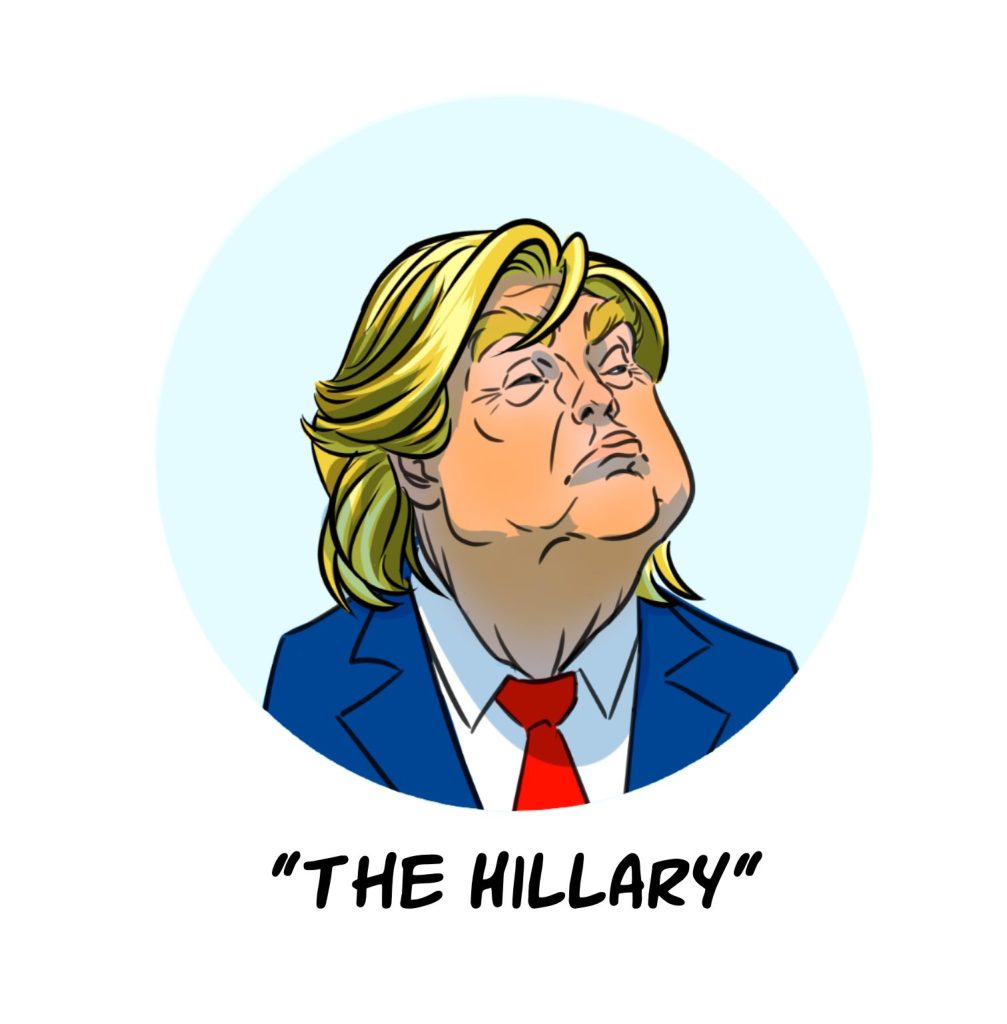 The 9 Most Tremendous Trump-Themed Gifts Under $30