Despite the presumed snobbery of the watch world, there are actually surprisingly few rules when it comes to where, when and how to wear a timepiece. After all, most people who are rocking a dive watch aren’t exactly Jacques Cousteau, just like field watch fans are more likely to be found scouring the cereal aisle than eating MREs on the battlefield. The same goes for dress watches. You don’t need to wear a dress watch with a suit, and you don’t need to be wearing a suit to wear a dress watch.

Since many watches are largely divorced from their function, the lines can get blurred between different categories. That’s why there isn’t exactly a strict definition of a dress watch, but there are some broadly agreed-upon parameters. Dress watches are slim, have a smaller diameter and typically have a simple face, allowing them to sit more comfortably under a dress shirt sleeve. Dress watches will often (but not always) have a leather band, rather than a steel bracelet. Since dress watches are so simple and slim, they work well as an everyday watch, and can easily be dressed down and paired with your everyday wardrobe.

Just like with any watch category, there’s an enormous price range in dress watches. On the lower end, you’ll find reliable, accurate and easy-to-maintain quartz watches, and on the higher end are luxury dress watches with meticulous movements and unimpeachable craftsmanship.

These are some of the best dress watches to buy now, regardless of whether you’re wearing them with a suit to a wedding or beat-up blue jeans at the bar.

These days, Timex is best known for its affordable quartz watches, but menswear maestro Todd Snyder took a peek in the brand’s archives and pulled out this gem. The Marlin is a mechanical watch with offbeat details. The watch has numerals on the even numbers, rather than the quarter-hours, and the numerals themselves are in an odd, stretched-out font. This watch is hand-wound, rather than automatic. Some might consider that tedious, but it also gives you more time to appreciate the beautiful face of this watch. 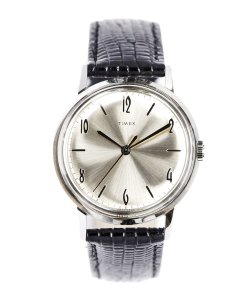 Haven’t you heard that it’s hip to be square? This watch from Seiko has a rectangular shape with a gold-tone case and matching gold face. The simple watch eschews ornamentation in favor of a simple face with indices, rather than numerals; while the strap is brown leather embellished by croc embossing. Best of all, the solar-powered quartz battery makes for fewer trips to the watch shop. 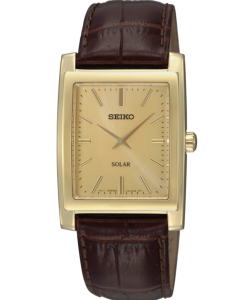 Chronograph watches are typically associated with racing, pilot or dive watches, rather than dress watches. But Junghans manages to pack three sub-dials, plus a day-date function into this automatic watch without compromising slimness and sleekness. The watch has a deep brown leather strap with a stainless steel case and an otherwise simple, white face. 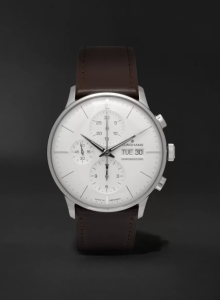 The Reverso from Jaeger-Lecoultre is an iconic timepiece, and this version has been revamped with a blue face, a blue leather strap and a stainless steel case, giving this watch a modern look. It’s a hand-wound mechanical watch with a Swiss-made caliber 822/2 movement. As this is a Reverso, you can flip the face over to reveal the back and protect the face from potential damage. Naturally, you’re unlikely to wear this watch somewhere where it could be damaged, but at the very least it’s a pleasantly tactile function that certainly beats a fidget spinner. 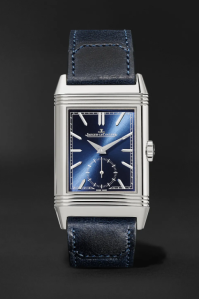 Skagen excels at making modern, minimalist watches, and the Signatur Mesh watch is no exception. This quartz watch has a fine mesh band and a 40mm circular face and unique stick indices that feature minute numerals, rather than hours. The standout feature is the unique turquoise face that sets it apart from standard white, gold and silver. 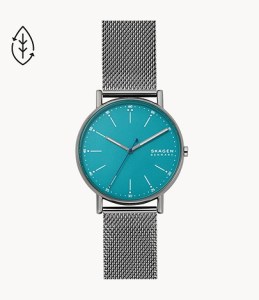 Contrary to popular belief, automatic does not have to mean expensive. The Orient Bambino is the perfect example. It’s a sub-150 dollar watch with an automatic movement and a face that looks a lot more expensive than it is. The watch has a stainless steel case with a sophisticated cream-colored face. Despite its classic looks, it has a few offbeat details, such as a mix of stick indices and Roman numerals for the hours and Arabic numerals for the minutes. While not as well-known as Seiko, Orient has been a leading Japanese watch brand for over 70 years. 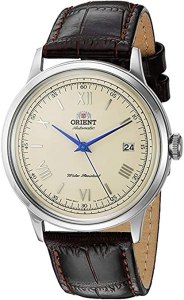 While best known as an American watchmaker, Hamilton has been under the umbrella of the Swiss Swatch group for nearly half a century. Perhaps that meeting of two worlds of watchmaking makes the unique face especially fitting. The hour and seconds hand dials overlap on the face and it adds a unique flair to this otherwise classic watch. This dress watch utilizes an automatic Swiss movement. 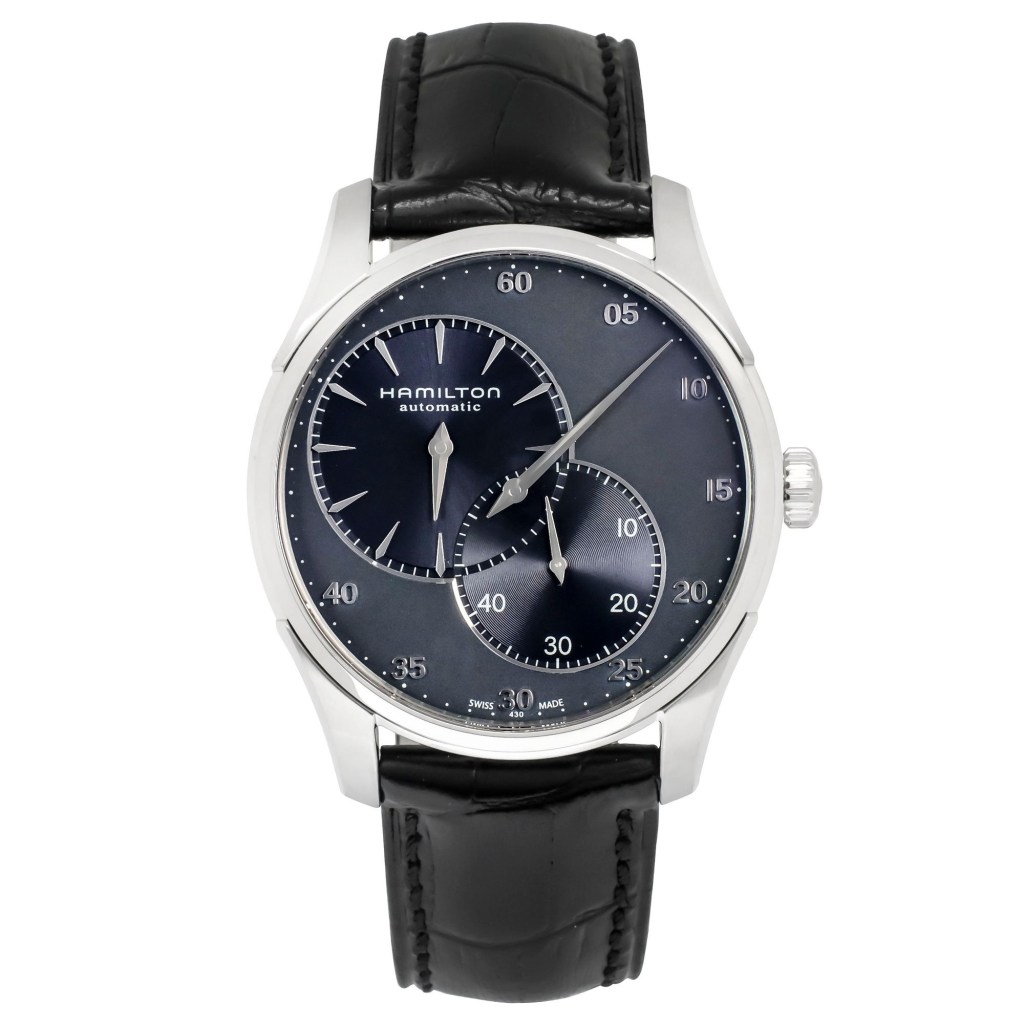 The watch world is notoriously obsessed with history and pedigree, which might make it surprising that Nomos Glashutte has gotten so much acclaim and attention, considering the fact that it’s a 90s kid. Of course, it’s not that surprising once you actually see these watches. The modern, minimal look makes this dress watch simultaneously understated and a standout. There’s a seconds sub-dial, a date window and a unique mint and red-colored power reserve indicator. The strap is made from premium Horween leather, and the whole thing clocks in at under four grand, making it an investment, but not eat-the-rich expensive. 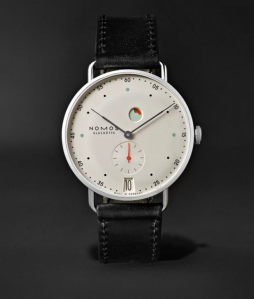 You might associate Braun with electric shavers and beard trimmers, but this storied German company has dabbled in everything from coffee grinders to record players to yes, watches. Take the BN0024 dress watch, which has a minimalist, modern look with simple Arabic numerals and a second subdial. The matte stainless steel case puts it on the more casual end of the dress watch spectrum, making it a great everyday timepiece. 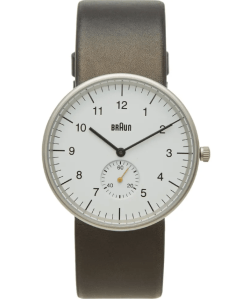 Not every timepiece needs to be from a century-old brand. Breda has been around for roughly a decade, and their timepieces are simple, stylish and affordable. This simple quartz dress watch has a green face with gold details. The unadorned black leather strap and simple Arabic numerals give this watch a classy, modern look. 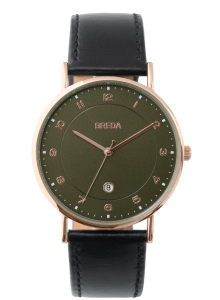 Mondaine watches are the official watch of the Swiss rail stations, and if you know how persnickety the Swiss are regarding time and watches in general, you’ll understand that Mondaine is a great watch to own. This sexy watch has a gold-colored case via plating. The case is a nice sized 40mm, and there are pops of red on top of the crown and the sweep second hand. It’ll look great next to a cocktail or a big box of popcorn. 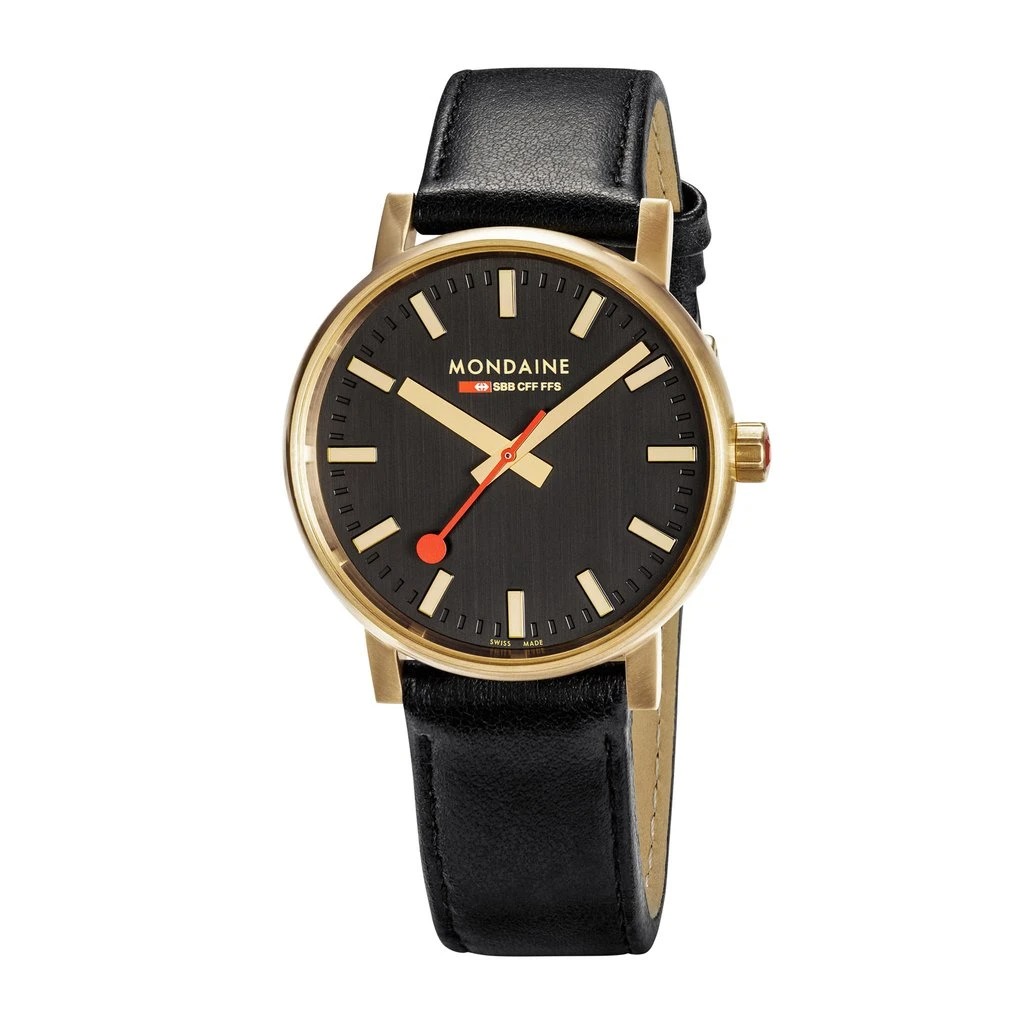 BEST USE OF NEGATIVE SPACE

This Klasse14 watch is so visually arresting, you might find yourself paying a tad too much attention to it. Klasse14 is a relatively new watch company, and they like to get creative with their designs. This quartz run watch is a great example of their craftsmanship. 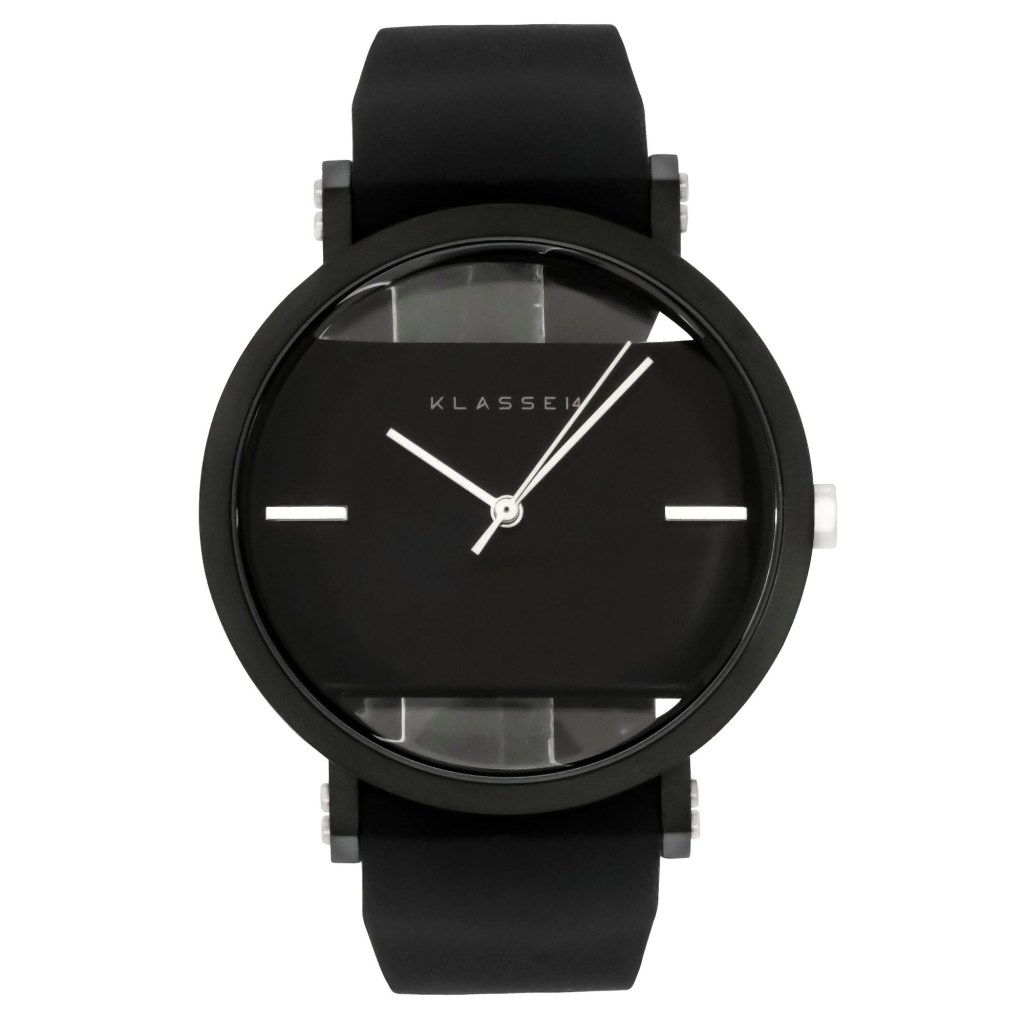 There’s something so snazzy and so gorgeous about the combination of bright gold and emerald green. Nixon does justice to that color combo with their bestselling Time Teller watch. Run by Japanese Miyota quartz, this classic three-hand watch has a timeless style. 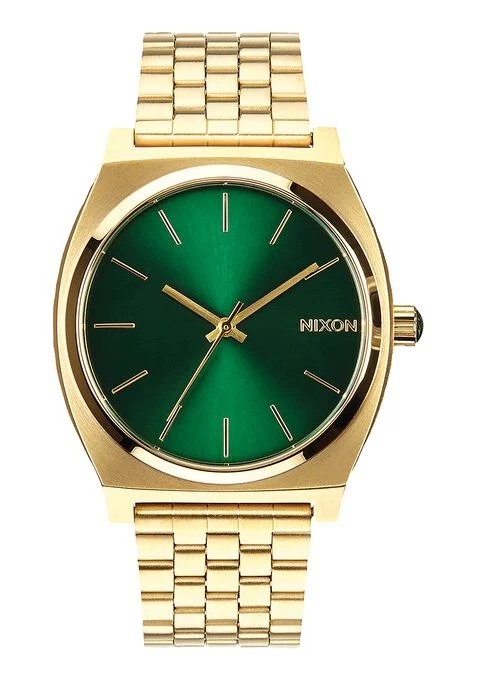 If you hear the name Montblanc, you probably think of that graduation pen that’s sitting somewhere in a desk or dresser drawer. Their watches on the other hand, really get around. They’re so sexy, it would be a crime not to wear one. This automatic blue and silver watch has the four cardinal directions (North, South, East and West) on the bezel, ensuring that you’ll never get lost again. 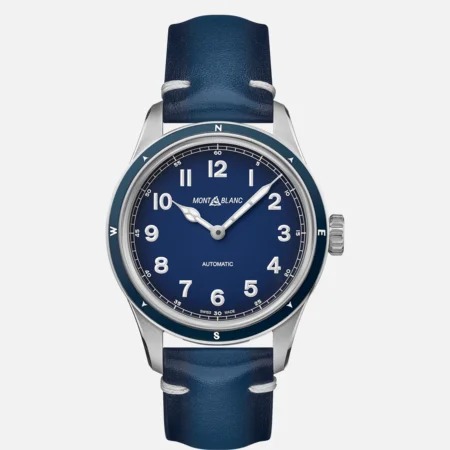 All of Baume et Mercier’s watches exude confidence and power. They’ve been gracing guys’ wrists for a seriously long time. This watch has a deep, stormy gray dial with a date window. The dark dial is brightened by blue hands and white numerals and indices. The strap is that same matching marine blue; making this a dress watch that transcends style. 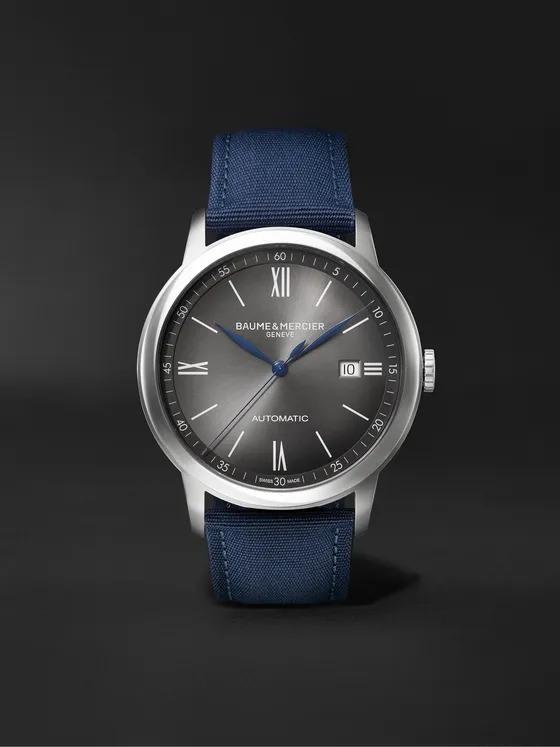 Looking for a watch to make an impression? Gucci’s been in the style spotlight for a while as creative director Alessandro Michele has totally revamped its style. Between Michele’s maximalist style and the upcoming movie about the family’s scandals, everything Gucci is über cool. Like their buzzy bee watch. The patterned strap is recreated on the watch’s dial. This two-hand watch has quartz movement. 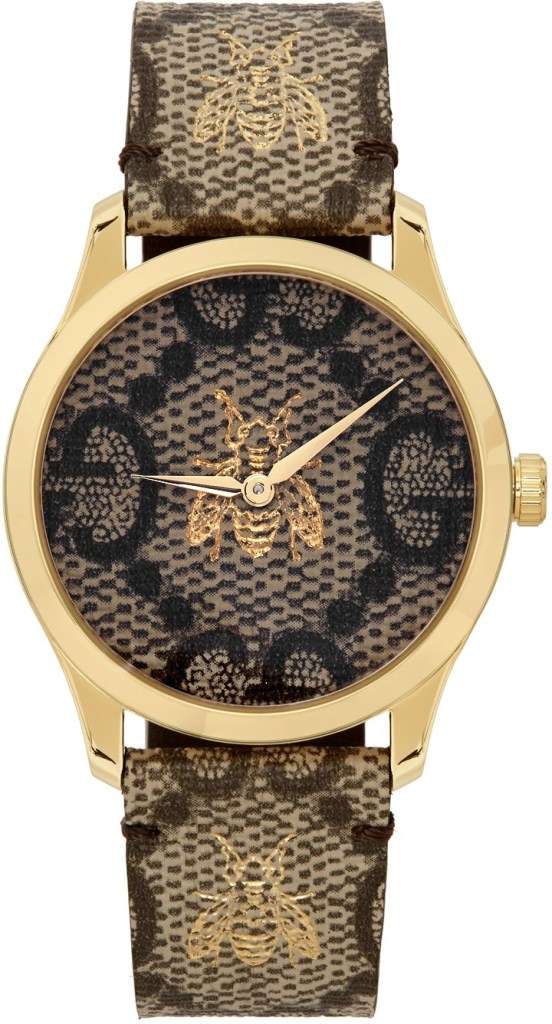 BEST USE OF ROSE GOLD

Rose gold touches smartly play up the blue of this Ferragamo timepiece. Take a closer look at the face, and you’ll see the silhouette of two shoes. The fashion powerhouse Salvatore Ferragamo got his start as a cobbler, and those shoes are a nice nod to the heritage of the eponymous brand. It has Swiss quartz movement and is a nice size at 40MM. 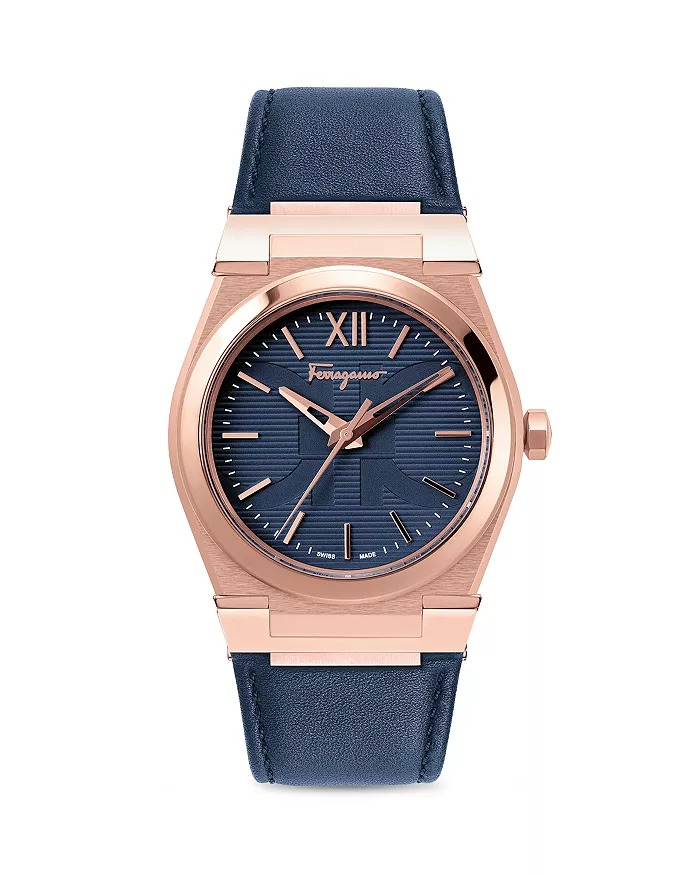 14 Automatic Watches That’ll Run Forever and Ever and …