* Elle Fanning named International Ambassador for L’Oreal Paris
* She will begin her role at Cannes Film Festival
* At just 19, Fanning is one of the youngest additions to L’Oreal team

At just 19, actress Elle Fanning is following in the footsteps of big sister Dakota, who scored major ad campaigns with fashion labels like Miu Miu and Marc Jacobs when she was just a young teenager. Last night, Elle announced via Instagram that she now a #lorealista, or one of the L’Oreal makeup brand’s ambassadors. L’Oreal’s high-profile list of spokespeople includes celebrities like Blake Lively, Andie McDowell, Julianne Moore and Naomi Watts. Fanning will be one of youngest additions to the team.

Fanning will kick off her new role at this week’s Cannes Film Festival, where she stars in two of the festival’s featured films The Beguiled and How to Talk to Girls at Parties. L’Oreal has been a sponsor for the festival for the past 20 years. “It’s an honor to welcome Elle Fanning to L’Oréal Paris just in time to celebrate our 20th anniversary as beauty partner at the Festival de Cannes,” L’Oréal’s Global President, Pierre Emmanuel Angelou said in a statement. “Elle is a natural choice for the brand as it highlights our love for beauty and cinema. Indeed, she is the face for the new generation as an accomplished actress, but also an inspiring canvas for makeup artists. I am sure that we will have a fruitful collaboration together.”

Fanning just wrapped filming her first campaign for Paradise Mascara at a castle in France. Just yesterday—before the big announcement—she took to Instagram to share a behind-the-scenes photo of herself on-set, with a corresponding caption that read: “Stay tuned for a big surprise.” 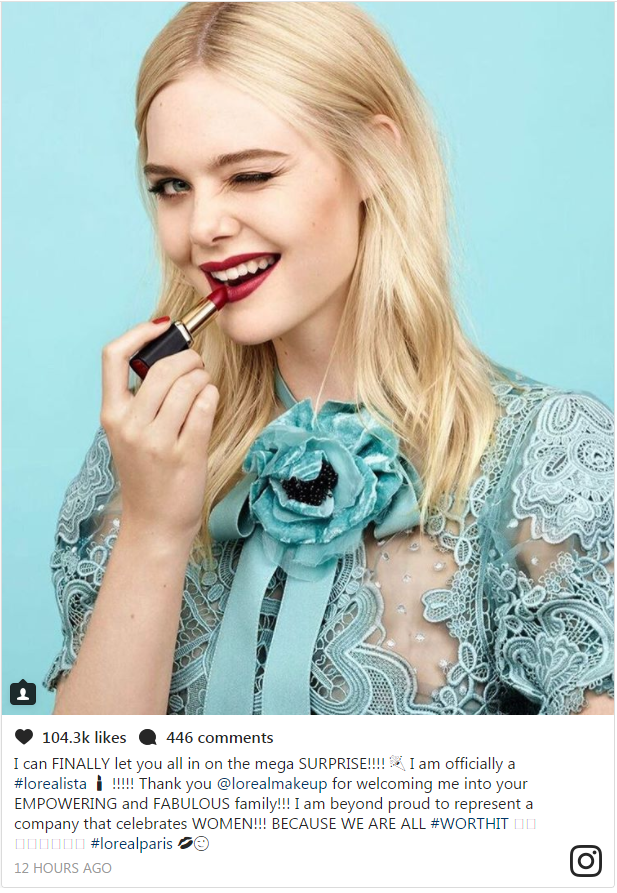 Hours later, she made it official in a follow-up post. And like L’Oreal, Fanning appears to be excited too. In a telephone interview, she told WWD that she appreciates how L’Oreal celebrates “women as a whole.” Another point of excitement? “I got to say ‘Because you’re worth it.’ I was like, ‘That is so cool,’” she said.