At just 22 years of age, Archie Hewlett, the founder of footwear brand Duke & Dexter, has already accomplished more than many people twice his age. His London-based brand has steadily grown since its 2014 inception, and its breakout moment came in 2015, when Eddie Redmayne wore Duke & Dexter loafers to collect his Oscar for Best Actor. Other celebrity fans have since followed (including Ryan Reynolds, Jonah Hill and Tyson Beckford).

Hewlett recently talked about the experience of starting a brand and shared his lessons learned with Jennie Bell of Footwear News. With his wise-beyond-his-years determination, and a steadfast focus on handmade shoes and master craftsmanship, it’s easy to see why Hewlett – and Duke & Dexter – has such a bright future:

From Footwear News:
JB: hat prompted you to start a shoe label?
AH: “It was just to get away from the work I was doing. I didn’t go to university and instead went into property recruitment, but I didn’t enjoy it. It didn’t suit me at all. And funnily enough, I wanted to move out of London, but with recruitment it’s a job right in the center of London. So my sole aim at that time was to make enough money on the side [with this business] to be able to move back to where my parents live, which is out in the countryside. That was the main reasoning for starting things up. It was never a basis to become an entrepreneur.”

JB: What is the biggest lesson you’ve learned so far?
AH: The biggest lesson was to actually spend money. Because I started with literally 6,000 pounds, I was always money conscious because I didn’t want to go into debt and I didn’t want to bring in investors. I started the brand to get out of recruitment, not to build a global empire. It was weighing up time against expense, [and at the start] I had a lot more time than I did money.  As the business progressed, I became too conscious on using my time to deal with day-to-day stuff rather than taking on key hires, focusing on the future of the business and spending on things like moving factories, a new fulfillment house and moving our office into Soho in London. All of which, looking back, my former self would’ve had a heart attack about. But it had to be done. You have to spend and speculate to accumulate. 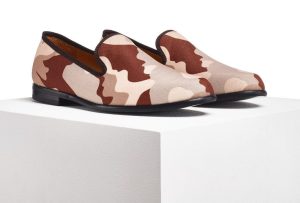 JB: How do you keep yourself motivated?
AH: I guess that comes down to realizing that there was a business to drive. I didn’t know that to start. I had confidence, but I had no idea whether it would take off. And also, I think it comes from being built with a drive. I could always find ways to have a go at myself about missing targets here or there. It takes a never-ending, relentless energy to keeping things going.