Adidas just dropped their latest sneaker collab, but this time it’s not with a rapper or athlete – it’s with Game of Thrones, in celebration of the award-winning show’s final season.

The collaboration consists of six Ultraboost sneakers that have been specially designed
To reflect the families and factions of the Seven Kingdoms (plus one sneaker for the army beyond The Wall). Each sneaker features a unique colorway, as well as the family’s catchphrase printed on a small heel tag. It’s a great opportunity to grab a pair of best-selling Ultraboosts for running or streetwear, while also getting hyped for the final season of GOT.

Although hyper-modern kicks and the sword-wielding characters of Game of Thrones might not seem compatible, Adidas has actually produced some stylish kicks that are sure to sell out fast. Check them out below.

Everyone’s favorite Game of Thrones characters – the dragons – got their own sneaker. It features an all-black colorway, save for speckled flames licking up the toe. 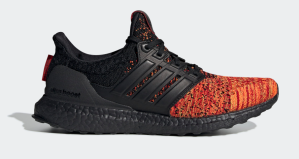 Adidas didn’t limit their collaboration to the “living” families in Game of Thrones. The White Walkers get represented too with these icy Ultraboosts. 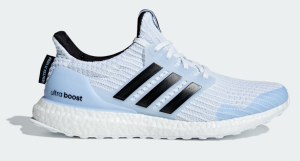 Run like royalty in these Ultraboosts inspired by the reigning family of Game of Thrones. They feature the wealthy family’s signature colors – red and gold – as well as a white sole and a black heel. 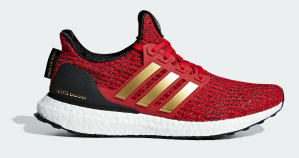 The Targaryens signature white locks and fair skin are represented in this Ultraboost with a clean all-white colorway. The kicks also have a few key design notes to remind you who they’re made for, including silver stripes and the Targaryens’ saying, “Fire and Blood,” printed on the heel tag. 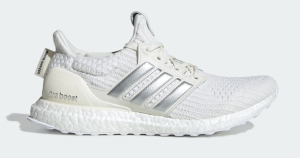 These black and grey kicks are as dark as the Stark family’s luck. They feature a slightly heavier tread and a warm sockliner that’s essential for the brutal cold of northern Westeros. 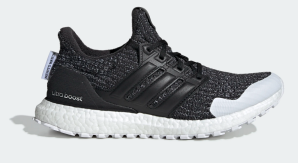