Winter may have come and gone but that doesn’t mean the love of Game of Thrones is going anywhere. In an age of on-demand TV viewing, it’s not difficult to relive the adventure anytime you want, and there are still going to be newcomers to the show, only increasing its popularity in the near future.

The fact that Game of Thrones is set in a fictional world made up of Medieval-esque fighters, dragons and characters not of human origin makes it a great option for costume parties. Part of what fans love so much is the immersive world and any opportunity to recreate that world.

We’ve put together a list of the top 14 Game of Thrones costume options for men. Each option from the show is sure to evoke different emotions from your fellow fans, no matter whether it was your emotional demise, kick-ass attitude or that time you pushed a child out of a window to prevent your incestuous relationship from being uncovered.

Take a look through each outfit and find the costume that speaks to you.

Go big or go home. It may cost a pretty penny, but you’ll definitely blow all other competing Jon Snow’s away with this Very Last Shop Hot TV Series Knight Snow Costume . There are few more iconic characters from the series than this illegitimate child who rose to become the King of the North (and came back from the dead?!). The costume includes Jon’s armor, a robe, a cape, pants, belts, gloves and pretty much everything you need to feel like you belong on the plains of Westeros. 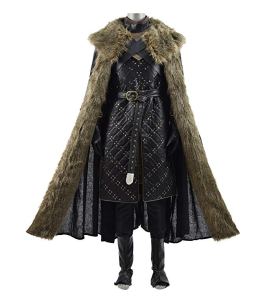 Although there may have been a lack of love between Tyrion Lannister and the rest of his family, there’s no such shortage when it comes to the GoT fans. It may well come from his love of everything alcoholic or simply the common ground of not seeing eye-to-eye with his siblings, dressing as Tyrion is a popular option. This Forum Novelties Inc Medieval Mercenary Costume is just the ticket and comes with a shirt, belt and vest. If your hair isn’t naturally Tyrion-esque, it’s easy to add the Miss U Hair Short Curly Hair Cosplay Costume Wig for a more complete and convincing look. 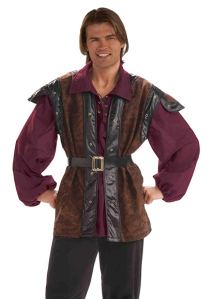 BEST FOR MEN WITH MUSCLES

He may not have been around for too long in the series, but Khal Drogo certainly left an impression on Game of Thrones fans. It could be because he was a large part of the beginning of Daenerys’ quest to Westeros dominance, or it could also be because he’s huge, imposing and makes a great option for Game of Thrones dress up. Whether you’re muscular or not, slipping into this Men’s Medieval Warrior Armor can’t help but make you feel strong. Throw in a replica Arakh Scythe and a long-haired wig, and you’ll most definitely look the part. 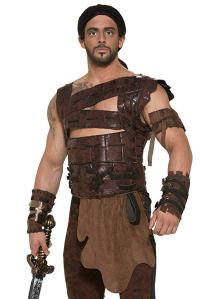 It’s not just human-like creatures which take the limelight in Game of Thrones. The program wouldn’t be the same without the giant, reptilian dragons playing their integral roles. For this reason, no GoT dress up party is complete without someone dressed as one of the fiery beasts. This Spooktacular Careations Onesie Dragon Costume is a great option for a last-minute costume that is both quick and requires minimal effort with maximum effect. 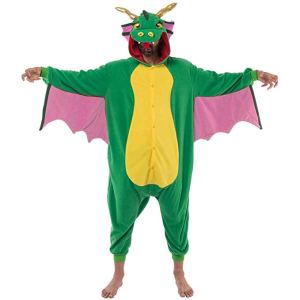 Sean Bean has made an art of dying in movies and TV series, and Game of Thrones was no different. As Ned Stark, he played one of the most crucial roles in ensuring love for the series. He remains a fan favorite even though his tenure was cut short in season 1. As a member of the Stark family, the Northern King Costume (Number 7) used for his son, Robb Stark, makes an equally useful costume for Ned Stark. However, crucially for Ned, adding this STfantasy Mens Brown Wavy Mid Length Wig completes the look for a more convincing costume. 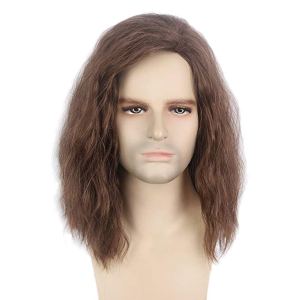 Granted, disabling a young boy by pushing him from a window is unlikely to gain you many fans. But, as it turns out, it’s still possible to regain plenty of popularity over the seasons through slightly less terrible acts to the point fans were sad when you eventually die. So if murder, incest and a heroic turn are qualities you’re into, this Forum Novelties Men’s Medieval King Costume Coat will give you the look you’re after. Add a sword and paint your hand gold for the complete Jaime Lannister look.

Created when a shard of dragon glass was pushed into a man’s heart, the Night King is the first of the White Walkers and has one of the most recognizable looks from the show. Luckily, this outfit is easily achievable with a Trick Or Treat Studios Men’s Full Head Mask . And, if you don’t feel like creating your own armor, try adding this SIDNOR Game of Thrones Night’s King Cosplay Costume  to really stand out. 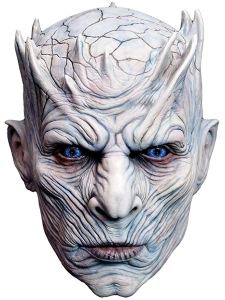 Daenerys Targaryen, or the Mother of Dragons as she is also known, is surely the most recognizable and possibly most bad ass of all the inhabitants of Westeros. With this in mind, it seems silly that gender should prevent someone from taking on the role and enjoying the respect which is given to such an integral character in the GoT world. As a guy, dressing as the Dragon Queen would bring you a ton of attention. This Fun Costumes Dragon Queen Costume is available in a range of sizes and includes a blue dress, blue hooded cape and taupe leggings. Add some luscious blonde locks and the right attitude, and you’re sure to pull it off. 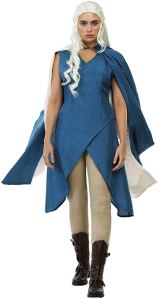 As arguably the most feared man in Westeros (aside from his brother Gregor, that is), Sandor Clegane certainly went on a journey throughout the saga. He’s a true killer in every sense and was once quoted as saying, “It gives me joy to kill people.” If becoming the man known as “The Hound” is something you desire, or you’ve got a friend dressing as Joffrey and fancy being his protector, slip on this Trick or Treat Studios The Hound Helmet . It’s made from durable latex and includes foam pads inside for comfort. 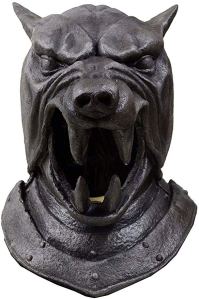 Right from the get go, the dire wolves were an integral part of the Game of Thrones story. And while not all six of these near-mythical creatures made it all the way to the end, there’s no way GoT fans can ignore the major role these loyal pups have played. Whether you choose to be Ghost, Nymeria, Lady or any of the others, you can play the part in this Adult Wolf Costume. It includes a full jump suit along with gloves and shoe coverings for a complete dire wolf-like look. 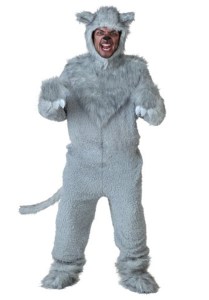 He may not have stuck around for too long, but that doesn’t mean everyone’s favorite giant didn’t leave a lasting impression. Wun Weg Wun Dar Wun was a fierce member of the Free Folk and played his part with plenty of gusto. Whether he was flinging around a flaming log or fighting in the memorable battle at Winterfell, Wun Wun’s raw size made him difficult to miss (with an arrow, too, which would eventually aid in his downfall). Slip inside this Adult Wun Wun Mask, complete with hair, to take on the giant role. Occasional shouts of “Snow,” “Tormund” or “Lokh kif rukh?” are a great way to show you’re really taking the part seriously. 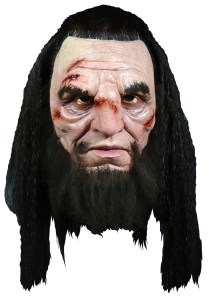 Robb Stark was the eldest son of Eddard Stark and Catelyn Tully and had the world at his feet. Sadly, things in Westeros don’t always work out, especially for Robb Stark, and season 3 was his last involvement in the series. That doesn’t mean this Game of Thrones Robb Stark Northern King Costume  is any less awesome. It comes with a full-length cape, a tunic and leather gloves for a complete look. Add a sword and some boots for an outfit that’s sure to make you stand out from the crowd. 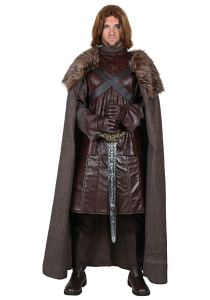 As the respected leader of the wildlings and long (ish) time friend of Jon Snow, Tormund Giantsbane has definitely played his part in the goings on in Westeros. Whether fighting or plotting, Tormund is always up to something. Thanks to this Wild Warrior Costume, you’ll have everything you need to look like this imposing mass of a man, especially if you have a beard. To complete the look, wear a ginger wig along with the included coat, scarf and belt. 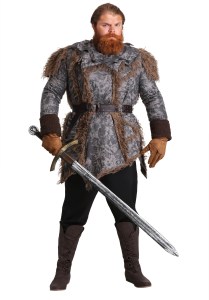 Ever since his rather mentally scarring death in season 6, Hodor has been a fan favorite, and any other GoT fans you come across this Halloween are sure to smile and possibly shed a tear when they see you. The outfit includes a tunic and a belt, which combined with a white beard of some kind, will complete this popular costume option. Just make sure to run around shouting, “Hold the door, hold the door, hold the door,” to complete your character impersonation. 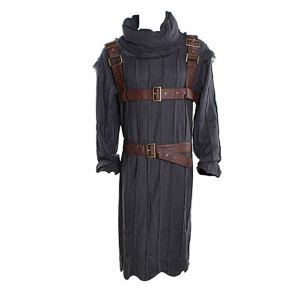 Need More Murder In Your Life After <em>Game of Thrones</em>? AcornTV has you Covered