Like a great renaissance painter, footwear brand G.H. Bass is finally getting its due. Just last year, Bass celebrated the 85th birthday of Weejuns, the Maine manufacturer’s trademark penny loafer. And while there have been many loafers since, many of which we love, G.H. Bass has the best claim to having invented the style. As the brand says on its website, “G.H. Bass was the first American manufacturer to construct leather loafers inspired by fashionable footwear popular in the social scene of Palm Beach.”

These classic penny loafers were hugely popular in the Ivy League heyday of the early 1960s (think JFK on vacation), but that prep-school aesthetic has made a major comeback in recent years thanks to brands like Rowing Blazers. As men embrace comfy, casual footwear and grandfather-approved apparel like knit polos, G.H. Bass is perfectly positioned for a comeback. Like Rockland or Clarks, you may think of G.H. Bass as a dad shoe brand, but dad shoes are very popular right now, and some of the brand’s latest releases are selling out.

The SPY team certainly has a few G.H. Bass fans. For the amount of shoe you get for the amount of money you pay, Bass Weejuns might still be the best loafer, pound for pound.

A lot can happen in 85 years, though, and the loafer has gone in and out of style. How fashionable the loafer is was largely pegged to who was wearing it at the time. The shoe was adopted by Ivy league kids, who paired them with collegiate sweatshirts, loose chinos and a bushy-tailed enthusiasm for knowledge. Then it was adopted by the bankers, who wore them with expensive suits, fancy watches, and a general disdain toward the middle class.

Though the loafers the bankers wore skewed Italian, American loafers like Bass were implicated by association. Fortunately, Bass’ Weejuns loafers have since rebounded in recent years, as stylish men and women have realized the outfit-enhancing power of the humble penny loafer. 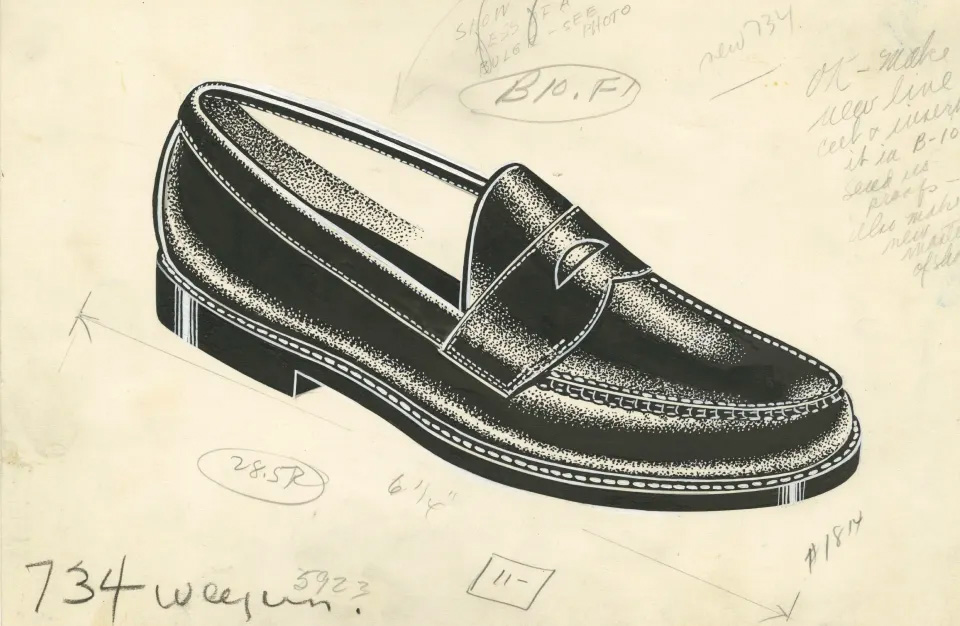 G.H. Bass can only take so much credit for its own revival; brands can’t necessarily control the prevailing winds of what’s considered cool. But like Carhartt, Crocs, New Balance and other brands that unexpectedly find themselves thrust into the forefront of fashion, Bass has smartly sailed along, picking up collaborators like Fred Perry, RE/DONE, Universal Works and Maharishi along the way.

Bass has also tweaked the Weejun without any help, stacking it on top of a chunky lug sole and playing with color and texture. In short, GH Bass was perfectly primed to take advantage of the loafer-loving moment we’re in.

Like many classic American inventions, creating the penny loafer took both ingenuity and a little borrowing from other cultures. Norwegian shops made a similar style of shoe that became popular among well-to-do American and British travelers. There was nowhere stateside where you could buy them, though.

Esquire magazine saw an opportunity to take advantage of the gap in the market and partnered with the now-defunct department store, Rogers Peet to bring them to a wider American audience. Bass was commissioned to physically produce the shoe and affectionately dubbed them Weejuns, after Norwegians. GH Bass’ added the slot for holding a penny, which is why this style of shoe is often known as a penny loafer. 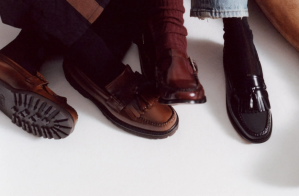 The exact purpose of this penny slot is up for debate. The story goes that two spare pennies could be stored in each slot, which was enough for a phone call. There’s no solid evidence that that’s what the pennies were for, but that people have stored pennies in their loafers is undoubtedly true. In either case, this twee habit likely pushed loafers toward their preppy reputation.

Although Bass loafers have gradually grown in popularity in recent years, it hasn’t necessarily been in lockstep with prep. Instead, stylish dudes are wearing them as a stand-in for sneakers. In short, that means wearing loafers with everything, and the fact that they’re easy to slip on and off helps. Jeans are fair game, as are work pants and shorts on the casual end. Weejuns also look great with suits and pleated pants. What makes Weejuns the perfect shoe is that they can just as easily dress up a casual outfit as they can dress down a more formal one.

These days, loafers are everywhere, and brands like Blackstock & Weber have emerged to make a street-ready take on the style. Maybe we’re reaching peak loafer and the tide will go out once again. If it does, though, we’re betting Bass will still be there until the next wave.

Our Site Director Timothy Beck Werth recently purchased these super-stylish loafers, which feature a fashion-forward chunky sole. Good lucky ordering them yourself, because like a lot of GH Bass’s most popular styles for Fall ’22, they’re almost completely sold out. 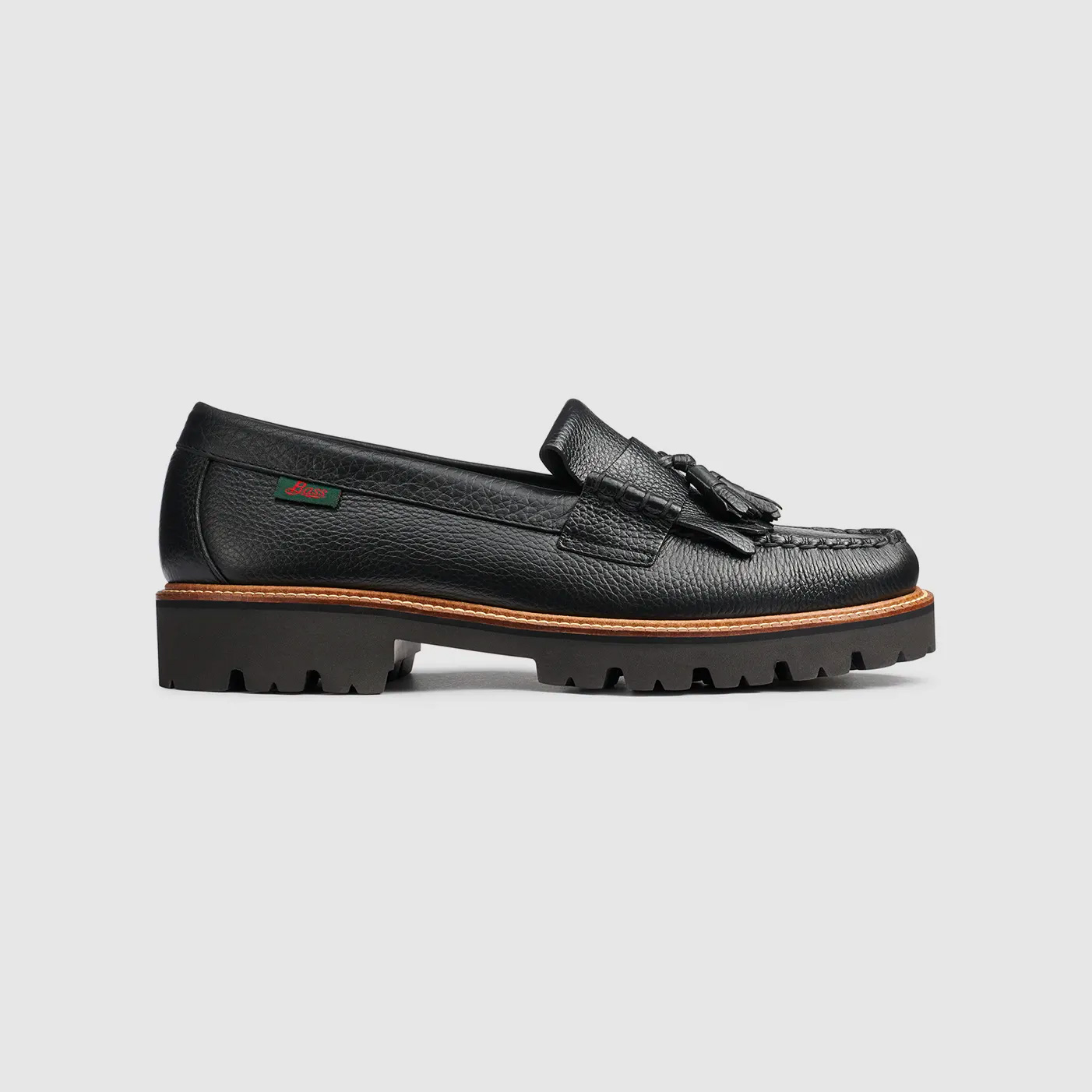 Bass has a lot of shoe styles, but if you’re going to buy one loafer, make it the Larson Weejun. It comes in a high-shine leather that’s fairly stiff out of the box, but breaks in over time. It’s available in black, brown and burgundy. The Larson has the distinct “beef roll” detail, which is the extra stitching on either side of the strap. 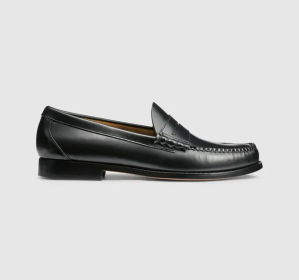 If the basic Weejun isn’t adventurous enough for you, Bass also makes this color-block version. It comes in green and burgundy with a white vamp (and was sported by Pierce Brosnan in a recent GQ shoot). The sizing is very limited, so if you spot it in your size, consider adding it to your cart. 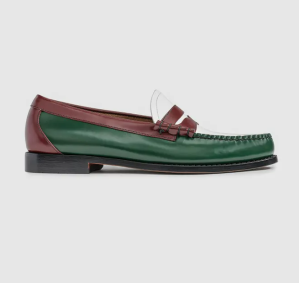 These woven patterned loafers are inspired by southwestern textiles, and they also call to mind Turkish Kilim slip-on shoes. The mash-up of inspirations works, though, and these can be easily worn with faded blue jeans or tan chinos. 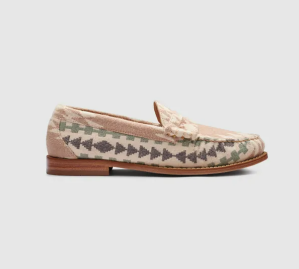 A true sign of the penny loafer’s versatility is that in addition to prep, the shoe has also been adopted by punk and mod subcultures, and Bass’ Layton Lug Weejuns are the most punk shoes on this list. The tassels nod toward tradition, but the chunky boot-like lug sole adds a shit-kicking twist. 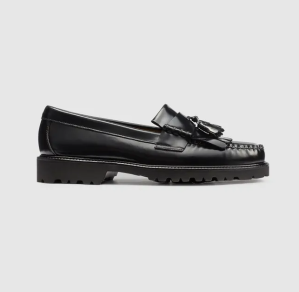 The horsebit loafer is a style popularized by Gucci. Unsurprisingly, their take is pretty expensive, but Bass makes an economical version of the horsebit loafer. Horsebit loafers are so named for the metal buckle across the strap, which resembles the bit that goes in a horse’s mouth. 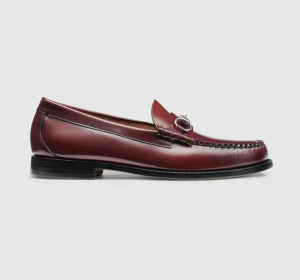