The supermodel’s highly-anticipated cosmetics collection with Maybelline will hit Ulta.com tomorrow, October, 22. You can already buy her Jetsetter palette on Ulta.com now. On Friday, Hadid revealed more information regarding the full collection, called “The Easy Coast Glam” collection in an Instagram post.  Find out more details about the launch from Women’s Wear Daily below:

From WWD:
Last week, [Hadid] revealed that the Jetsetter Palette, the first product in the Gigi x Maybelline collection, would be “coming soon” to the retailer, tagging Ulta Beauty in her post.

Hadid also reported that the palette, which dropped [last week] as an online exclusive with Boots in the U.K, had sold out within 90 minutes of its launch. The palette is priced at 9.99 pounds in the U.K, and contains eye shadow, concealer, blush, bronzer, highlighter, mascara and lip balm. [ The Jetsetter palette is now for sale on Ulta.com for $29.99, with the remainder of the collection launching tomorrow. ] 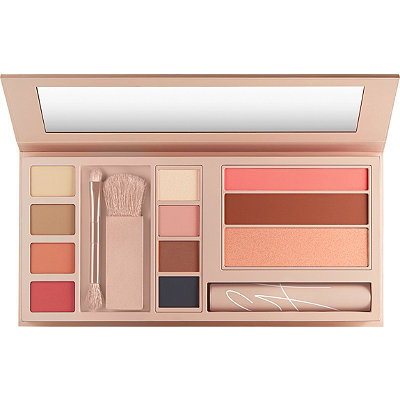