Recently, I had some time to kill with relatives who were in town visiting New York City. And while we were waiting for Moulin Rouge to start, I took them to the SoHo shopping district in Manhattan. It was one of the coldest, windiest days of the year, and I stepped inside an Aldo for the first time in years. I took a quick glance at the men’s footwear section and instantly thought I saw several shoes that looked suspiciously similar to Gucci shoes that I’ve coveted.

I’ve been seeing a lot of Gucci loafer dupes in the wild lately, and maybe I’m just primed to see similarities where they don’t exist.

I’ve pretty much aged out of my Aldo years. The fast-fashion footwear company can be a great destination for affordable dress shoes, sneakers and accessories for men and women, but today I’d rather spend a few hundred dollars at Thursday Boot Company or Allen Edmonds. And in the fashion world, trends, patterns, silhouettes and designs are borrowed and remixed constantly. This is a natural part of the fashion evolution process, but you also see dupes and lookalikes that border on outright fashion plagiarism.

And if you love Gucci men’s loafers and the fashion house’s iconic motifs, then I wonder if any of these Aldo shoes seem extremely familiar to you, too? 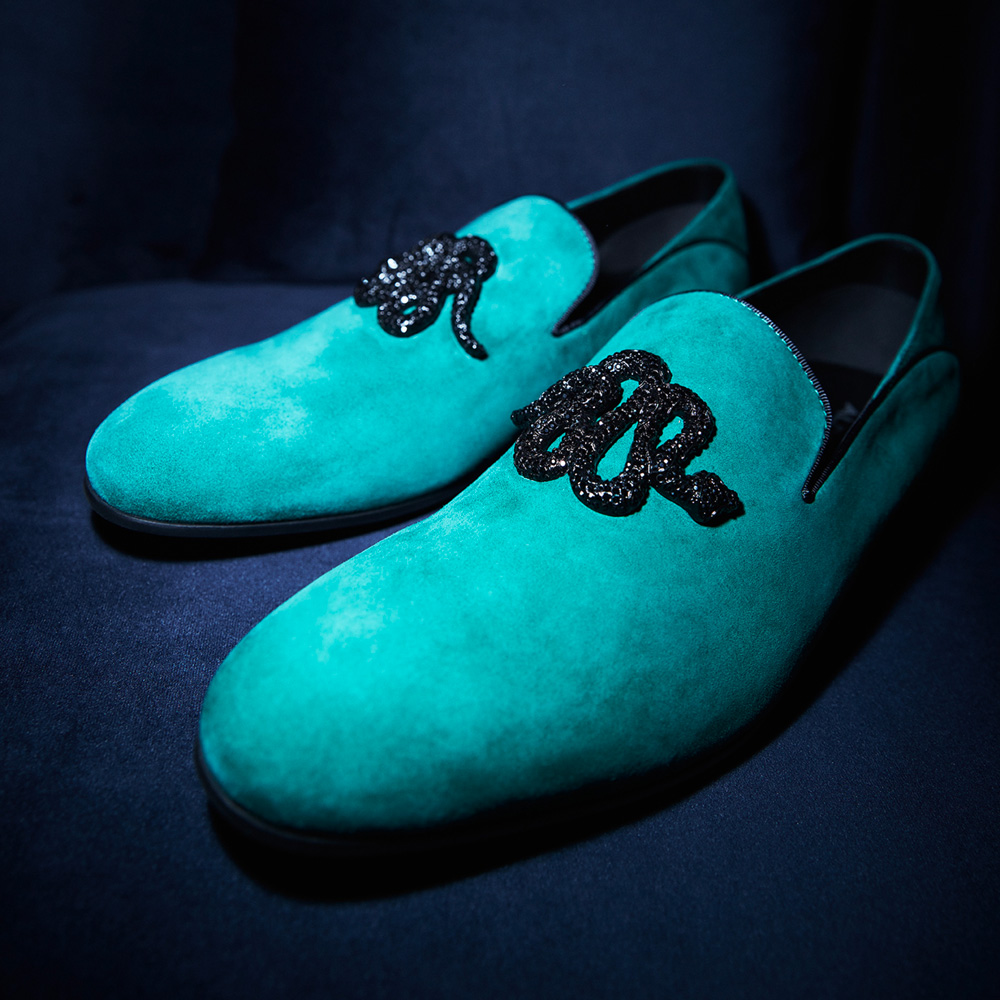 In the age of fast fashion, it is extremely common for budget retailers to take a lot more than inspiration from designer fashion houses, and sites like Pinterest and Reddit are full of shoppers sharing advice on how to find Gucci dupes and Balenciaga lookalikes. We’re not talking about the literal knockoffs, i.e. the counterfeit handbags and watches you’ll find for sale on Canal Street in New York City. Rather, we mean designs that look similar to designer pieces but are different enough to be sold at fast fashion outlets.

There’s actually a reason you see so many of these dupes in the fashion world. Because of outdated trademark laws here in the United States, it’s extremely difficult to protect individual fashion designs as trademarkable intellectual property. And for decades, this legal anarchy has let designers rip each other off with relatively few consequences. Thus, the proliferation of Gucci loafer dupes.

A quick look at the Aldo website revealed a ton of sneakers, loafers and slip-on shoes for men that evoked popular Gucci footwear in my mind. I can’t speak to Aldo’s design process, and I suppose it’s definitely possible that an ignorant designer arrived at these designs and accents independently. However, comparing some of these shoes side-by-side, the similarities seem obvious to me.

In recent years, Gucci’s men’s loafers have become extremely popular, and they’re instantly recognizable if you care about men’s fashion. These loafers usually come in black or brown leather, feature a two-tone strip of fabric across the upper, and have either Gucci’s horsebit metal accent or the iconic interlocking double G Gucci is famous for. Below, you can see both of these details up close, as well as Aldo shoes with similar features. 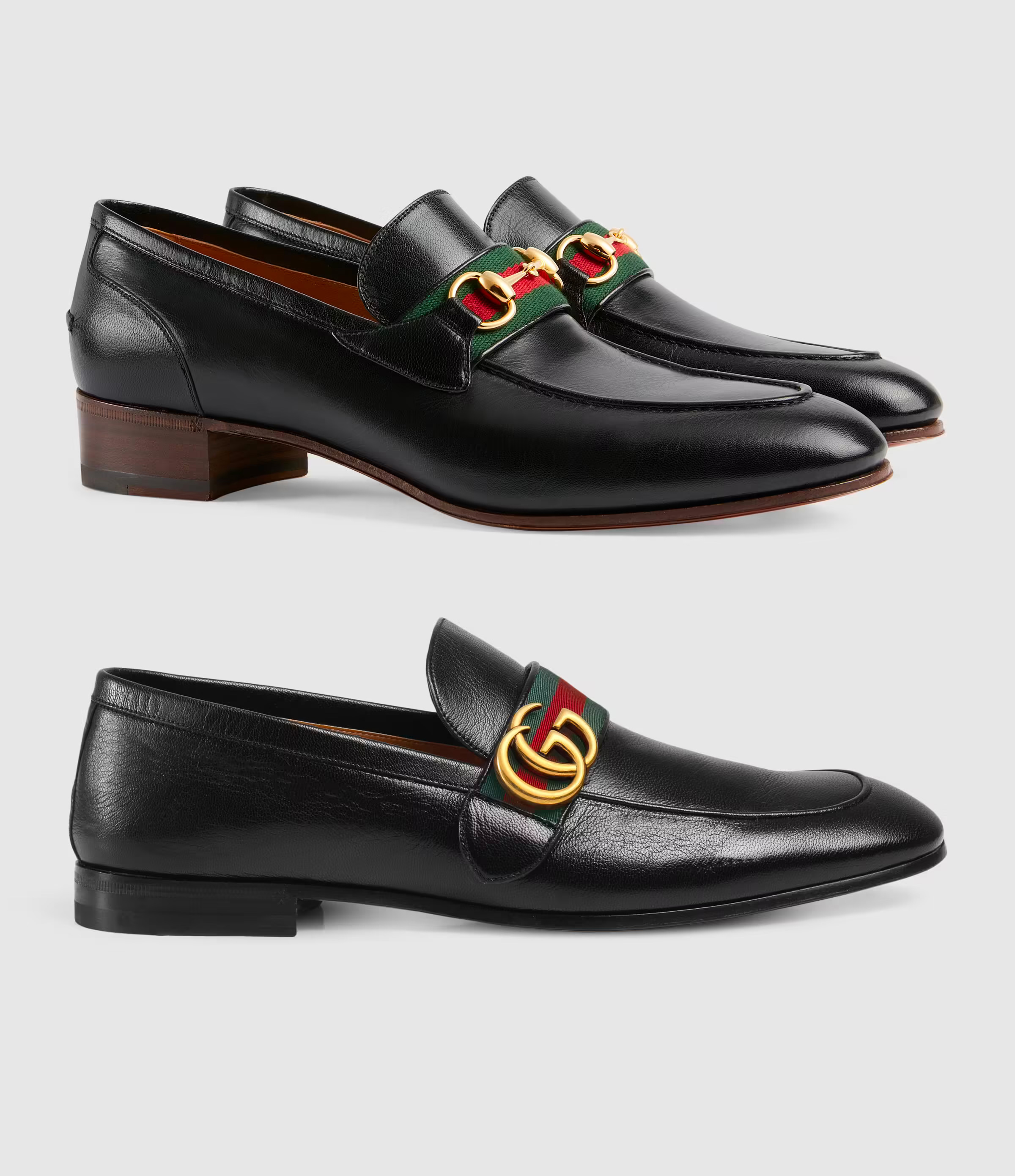 Gucci’s iconic Marmont Belt became popular several years ago, and it features the brand’s familiar double-G logo. In the world of Gucci Marmont dupes, two interlocking O’s are a common lookalike feature. And in the designs below, you can see a double O design, as well as horsebit-style metal accents. 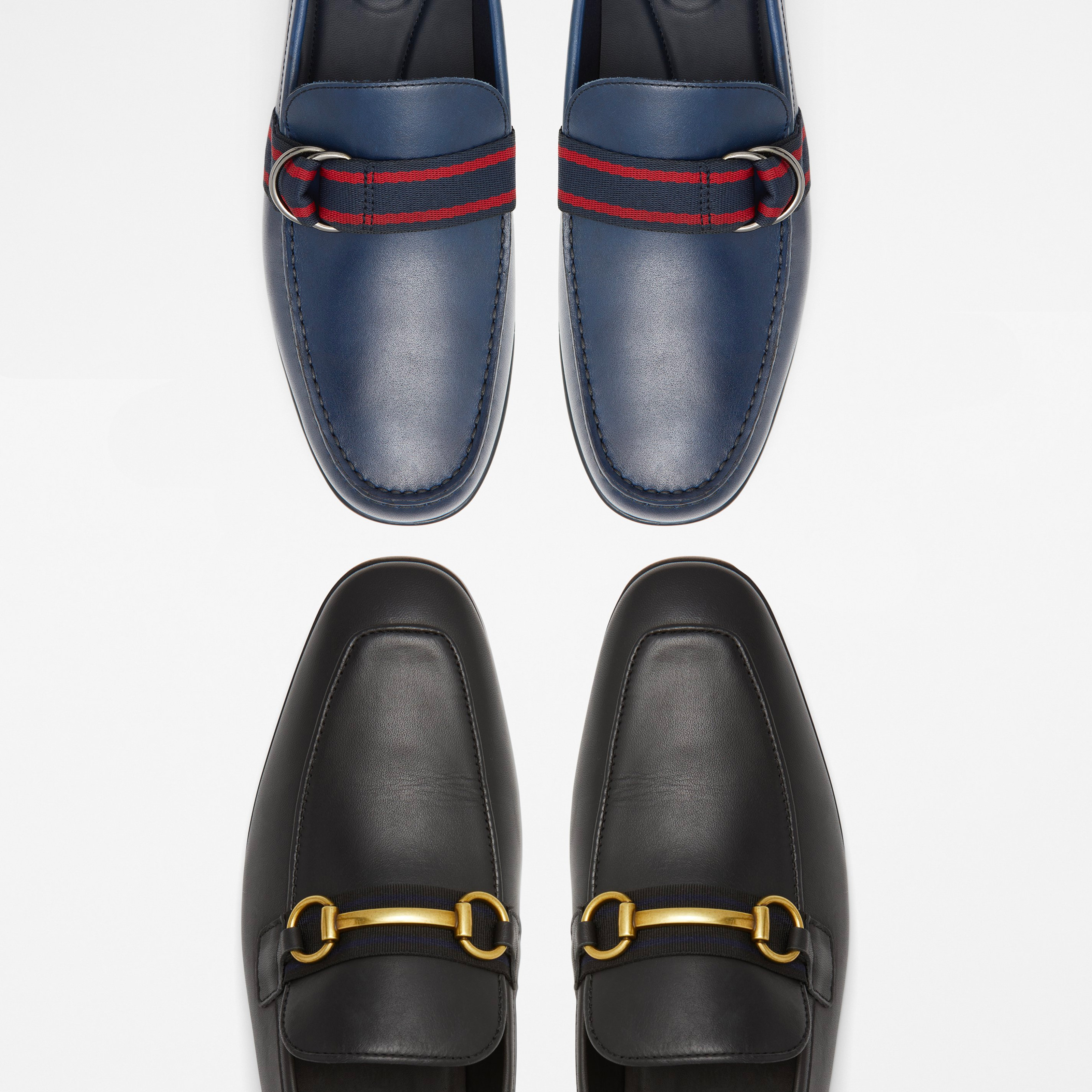 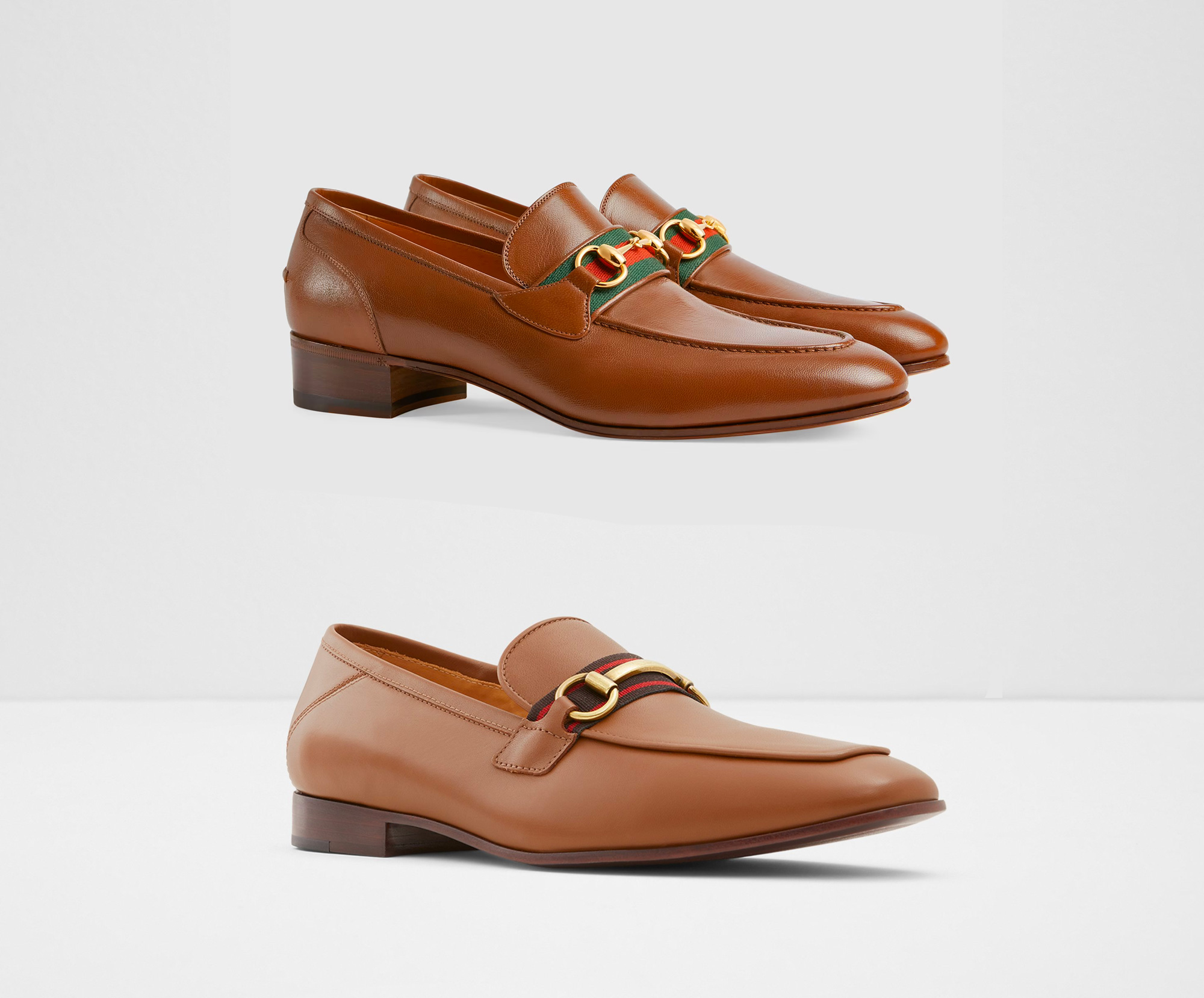 The similarities don’t end there. Anyone that wears Gucci (or aspires to wear Gucci) knows that the company has several famous motifs. We’ve mentioned the interlocking G logo, but the company also uses distinctive animal emblems in its designs. The Gucci bee and snake emblems are also instantly recognizable symbols of the brand. 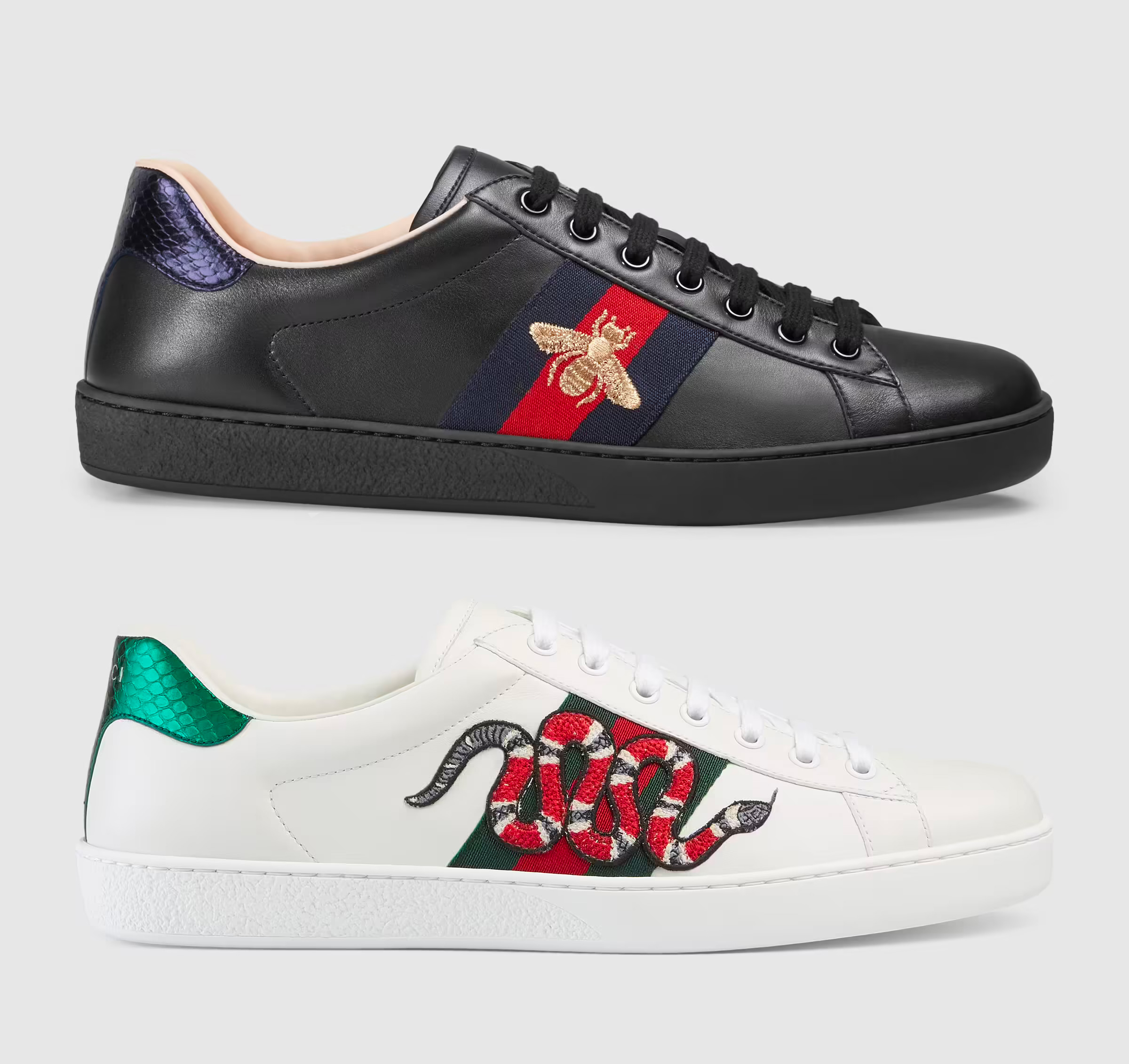 Coincidentally, Aldo is also using snakes and bees in its designs. 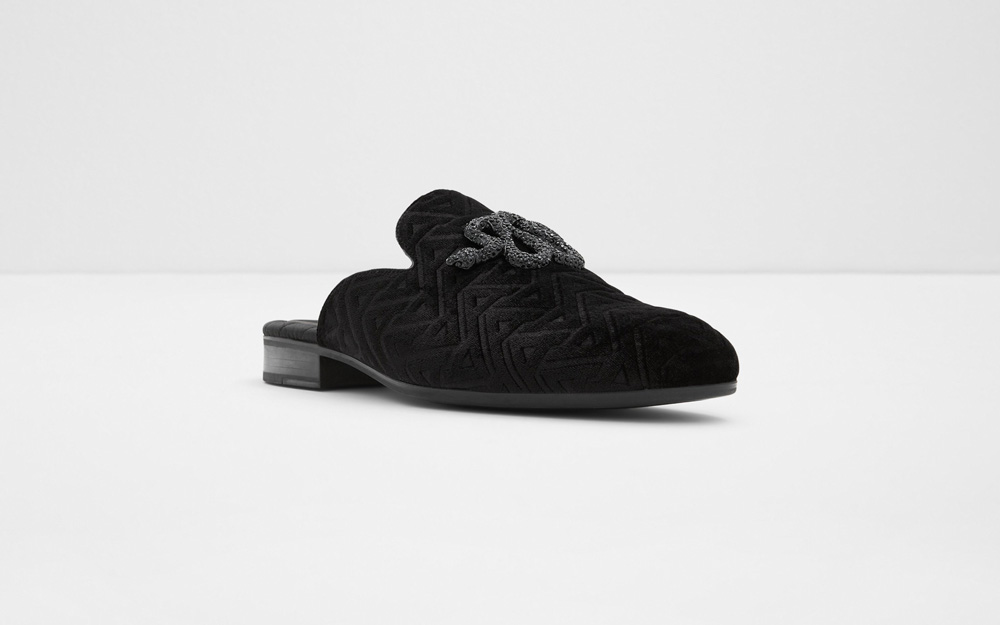 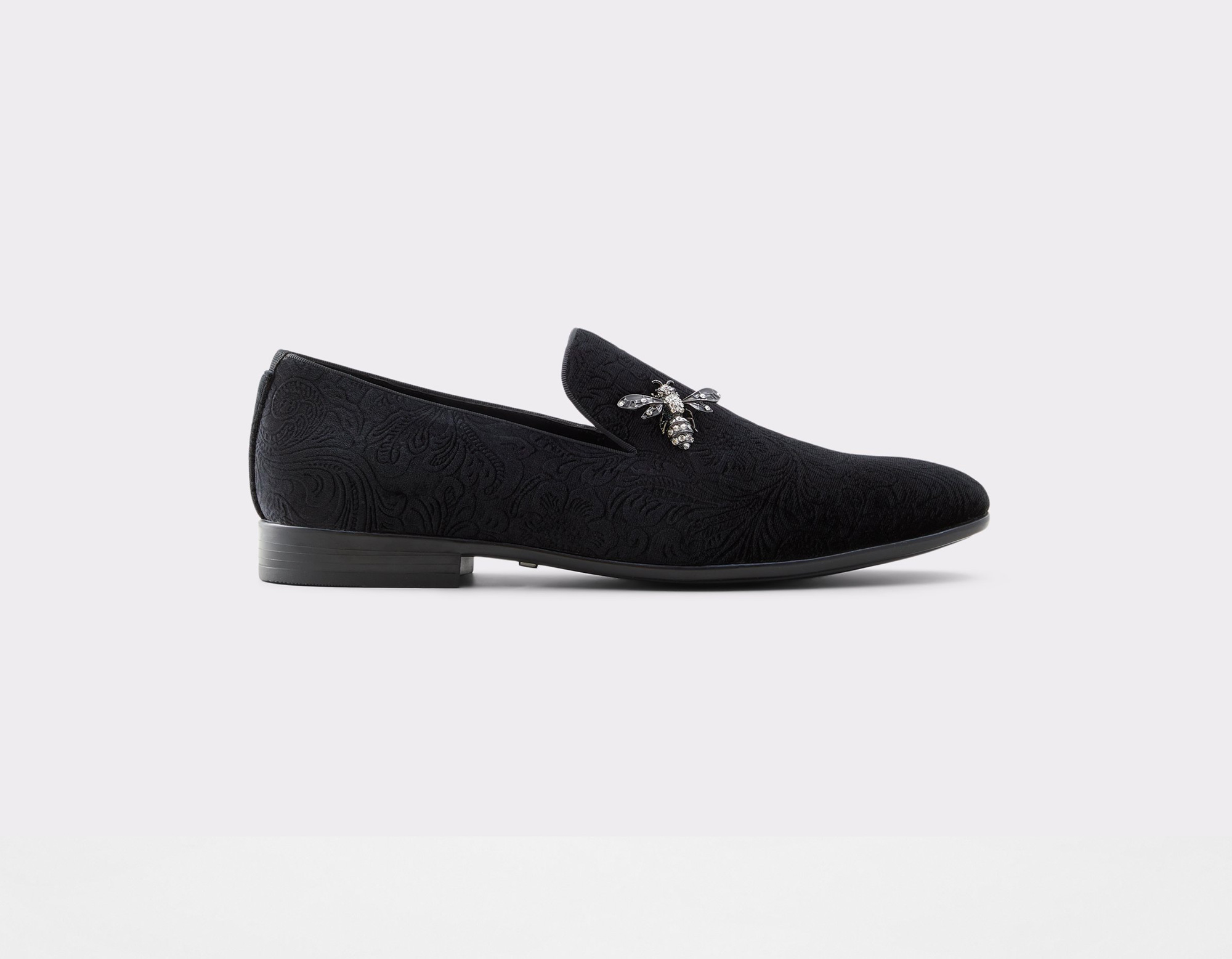 If someone didn’t know better, they might take a quick glance at these and assume they were a pair of Gucci slippers. A more discerning observer will instantly be able to tell the difference, of course.

Look, a certain amount of appropriation is to be expected in the fashion world, as artists and designers naturally influence each other and cater to shoppers’ tastes. But when it comes to style, there’s no substitute for the real thing.

Because Gucci is so popular, there is a booming market for Gucci dupes, and probably will be for a while. Unless U.S. intellectual property and trademark law evolve to better protect designers, shoppers will always be able to find cheap dupes and lookalikes of designer fashion.

If you’re interested in checking out the Aldo shoes featured above, you can head to the footwear brand’s online store and check out Aldo designs such as Golmard, Squamo, Sevirasien, Helios and Weaver.

Of course, you’ll have to pay a lot, lot more for Gucci loafers, which are available at designer department stores and Gucci.