Brands like Nike and Adidas have built their global empires on the ability to market their athletic apparel, both in terms of style and performance. The distinctive style of Jordan Brand’s sneakers has made them collector’s items among sneakerheads who wouldn’t dare wear them anywhere near a basketball court, while high tech footwear like APL’s basketball shoes and Nike’s Vaporfly running shoes let athletes (literally) reach new heights. But sometimes performance sneakers can have technology that gives athletes an unfair advantage, running afoul of the respective sport’s regulatory agency. And in other cases, sometimes the shoe is just the wrong color.

While any athlete would want shoes, clothes and equipment that help them compete to the best of their abilities, how much performance is too much performance? And can equipment tilt the balance in favor of one athlete over the other? It’s a thorny question to answer. On the one hand, you don’t want to discredit the accomplishments of any athlete. But it’s also important to keep fairness in mind, which is the heart of any sport or game. Everything from to snowboards to body-length swimsuits to curling brooms have been banned from their respective sports, but it’s undeniably sneakers that land in hot water the most often.

To better understand the history of banned shoes in professional sports, we talked to Wade Motawi, a shoe designer with more than 25 years of experience creating shoes and advising footwear brands. He gave us some insight into the impact banned shoes have had on the footwear industry over the years. Motawi runs the Sneaker Factory website, and he literally wrote the book on how shoes are made, aptly titled How Shoes Are Made.

Nike and Adidas, as well as lesser-known companies like APL and Spira have either had their shoes caught in controversy or banned outright in basketball, tennis, running and other sports. Performance is usually the key reason; ruling agencies understandably scrutinize any equipment that can give an athlete or team an unfair advantage over another. Over-engineered footwear and equipment is considered to be a form of “technological doping,” but there’s no clear line in the sand between gear that helps an athlete reach their fullest potential and shoes that give them an unnatural edge. But Motawi notes that “In the case of the new shoes being banned, it is the ‘best’ thing that could happen to a performance shoe.” 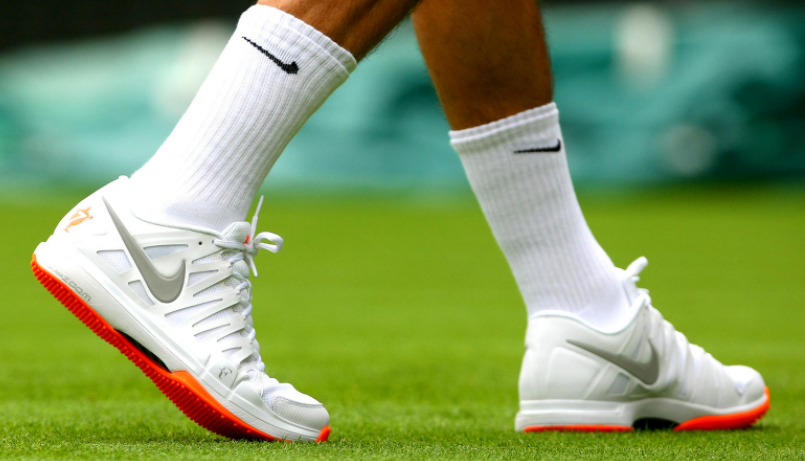 Why Being “Banned” Might Actually Be a Good Thing

The publicity around high-tech sneakers can generate buzz for the brand. Even though the term “doping” calls to mind the many athletes whose reputation was tainted by their use of performance-enhancing pills, technological doping is unlikely to have the same effect on an athlete’s reputation. Whatever the material advantage may be, lacing up high-tech Nikes doesn’t have the furtive reputation of PEDs. Simply put, sneakers are not the same as steroids.

There’s a reason Nike capitalized on Michael Jordan’s banned sneakers and spun that into profit (in Jordan’s case, it was color, not tech, that landed his shoes in hot water). As Motawi notes, “you can’t buy better PR.”  Likewise, the NBA’s ban on APL’s sneakers generated headlines that turned this brand from obscure to sought-after. After all, just because a pair of sneakers can’t be worn on the professional field, the controversy might drive amateur athletes to pick up a pair. Amateur runners or street ballers can reap the potential performance benefits of these high-tech shoes, and casual wearers can take advantage of the cool factor that goes along with being outlawed.

Below, we’ve rounded up the most controversial banned sneakers in sports history, organized in chronological order by when the controversy took place. These shoes range from high-tech runners to flashy basketball sneaks to sleek tennis shoes. Suffice to say, you may not be able to buy all of the exact banned shoes, as many of them were custom-made for the athletes or have since been discontinued. In those cases, we’ve found comparable examples by the brands.

Michael Jordan changed the game by being a once-in-a-generation player. But Jordan’s biggest contribution to the world of athletics is arguably changing the status of athletes from sportsmen to superstars. Of course there were famous athletes before him, but from the “Be Like Mike” Gatorade commercials to Space Jam, MJ deftly inserted himself into the culture in a way no athlete before him had.

Of course, the sneakers were the biggest component of his off-court superstardom, and Jordan Brand remains one of the most in-demand sneaker brands in Nike’s roster. But his Jordan sneakers were originally banned from the court.

So what was wrong with these shoes? It was the color. The black and red shoes didn’t properly match the Bulls jerseys. Even though black and red is the color of the Bulls, the sneakers didn’t have enough white; it seems pretty nit-picky, but at the time, it was a big deal. The legend goes that the David Stern-led NBA  would fine Jordan five grand every time he wore the shoes, and Nike picked up the tab. Nike has leaned into this controversy and spun it into profit, and the black and red Jordans are still referred to as the “Banned” colorway.

Here’s where it gets weird. Like many legends, there are disputes over the veracity of this widely accepted story. Sneaker site Sole Collector claims that the Jordan 1 was never actually banned, but that it was a lesser-known sneaker style called the Air Ship in black and red that was slapped with a ban. Jordan may also have never actually been fined, he may have just been threatened with a fine. Plus, a fine that Jordan and Nike can easily pay isn’t exactly the same as a ban. Like the old quip, “The Holy Roman Empire was neither Holy nor Roman, nor an Empire,” the banned Jordans 1s were neither banned nor Jordan 1s.

You could go down a rabbit hole and never come out untangling the truth of these shoes, but the reputation of these sneakers undoubtedly propelled Jordan brand to where it is today. 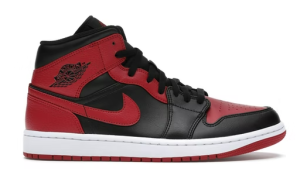 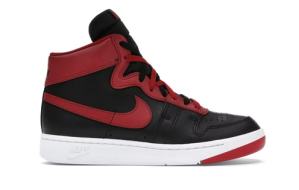 Spira’s are the banned shoes that weren’t. The story goes that these sneakers from a brand most people haven’t heard of were forbidden from being worn at marathon races by USA Track & Field (USATF). The shoes featured what they called Wavespring technology, which was designed to have less energy loss and a springier step.

Spira actually sued USA Track & Field and the International Association of Athletics Federations in 2007, claiming athletes were afraid to wear Spira’s shoes because of a fear of disqualification. But these agencies never actually issued a ruling banning Spira’s shoes. That meant that Spira’s lawsuit was essentially just a publicity stunt, and one that didn’t really pay off. Spira remains an obscure footwear brand and shuttered in 2016, selling off its intellectual property (though you can still buy shoes from the Spira website). 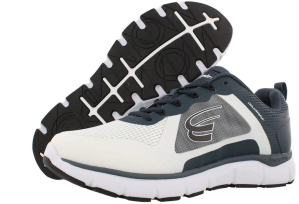 Want to be like Mike? Forget Jordans, you need APLs. Athletic Propulsion Labs Concept 1s were designed to help you fly, but it wasn’t just marketing. The shoes were actually banned by the NBA because they were deemed as giving an unfair advantage.

Athletic Propulsion Labs was founded in Los Angeles in 2009, but they quickly ran into trouble when their Concept 1 sneakers were banned by the NBA in the 2010-11 series. Of course, that didn’t slow them down, and the brand is still around and produces some of the most talked-about running sneakers.

In 2020, the brand rereleased the sneakers under the moniker SUPERFUTURE. Just like Nike, APL had no problem leaning into the controversy; the description of these shoes mentions the ban in the very first line of the copy. APL claims these shoes can add up to 3.5 inches to your jump, which is a big deal for any basketball player.  They probably won’t improve your free throw percentage, though. That’s all you. 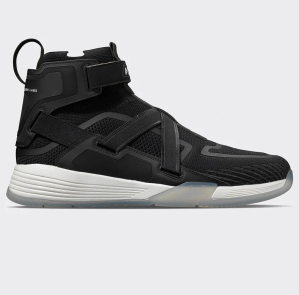 The most famous tennis tournament in the world is arguably best known not for elite playing, but for its love of old-school rules. Wimbledon is very strict about the colors players wear; male and female athletes are required to wear all-white clothing while playing (it’s also the only major tournament where they play on grass, white clothing’s second-worst enemy behind spaghetti).

We’re guessing even Diddy’s white parties would be laxer than Wimbledon; the tournament issued rules that stated that “white does not include off-white or cream.” Sheesh.

Even seasoned Wimbledon champions players can run afoul of this rule. In 2013, Roger Federer, easily the most famous male tennis player in the world, was told that he was not allowed to wear his Nike Vapor 9s. Were these shoes a color other than white? No, by any reasonable standard, these shoes would be considered white. But it’s Wimbledon we’re talking about. Federer’s Nikes had an orange sole that could be seen from the side and back of the shoes, and he was told he could not wear them. Like they did with Jordan, Nike capitalized on the controversy and released an ad. 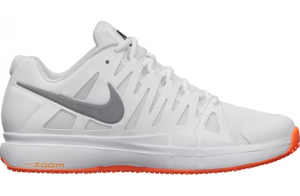 It was not one, but two Nike sneakers that were caught in controversy. The Vaporfly and Alphafly are two Nike shoes favored by marathoners, and they have faced heavy scrutiny for their potential role in enhancing the performance of runners. In fact, it was Nike that may have shot themselves in the foot (or the sneaker, as it were); they funded the research showing the performance capabilities of their shoes. Eliud Kipchoge has worn both of these styles, and he is considered the greatest marathoner of all time. But he’s hardly the only marathoner to wear these styles; men and women alike have captured top spots on the podium wearing Vaporfly shoes.

But were these shoes banned? Sort of. World Athletics, the governing body for track and field, issued a ban on one version of the Vaporfly. Nike turned around and issued a new version of the shoe to comply with the organization’s ruling. That updated shoe was allowed to run in the 2020 Olympics, but the Alphafly shoes Kipchoge wore in 2019 to set his unofficial sub-2-hour marathon were not permitted.

So what makes these shoes special? Nike utilized a carbon-fiber shank that allowed runners to propel forward faster, and a New York Times study found that the advantage conferred by Nike’s shoes may be bigger than realized. 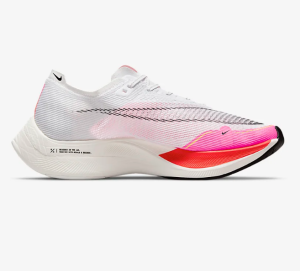 It’s one thing to be told your shoes aren’t allowed prior to the race. It’s entirely another thing to run the entire race — and win — only to be told your shoes broke the rules. That’s exactly what happened to Vienna Marathon winner Derara Hurisa, who finished the 2021 race while wearing Adidas Adizero Prime X sneakers, which were five centimeters thick, one centimeter over the allowed thickness.

Hurisa registered a different pair of Adidas Adizero’s with the marathon, then laced up the Prime X’s he trained with before the race. It’s not clear why he did that, but we’ll chalk it up to a lapse in judgment. 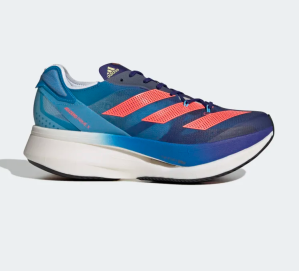 The Ultimate Guide to Men’s White Sneakers in 2022: Legends, Trends and Notables