One blink and it suddenly appeared. Hot pink met Barbiecore in an eye-blinding photo from the Barbie movie set, and now the whole world is rendered in shades of shocking pink. Valentino’s Fall ’22 runway show featured almost fluorescent pink clothing and accessories for men and women, and Sebastian Stan represented the brand with his hot pink ensemble at the Met Gala. Then at the Grammys, we saw more hot pink on the red carpet when Bieber wore a hot pink beanie, Billy Porter wore the shade head-to-toe, and Travis Barker wore a hot pink coat.

But while celebrities strutted their stuff in this shade, it wasn’t trickling down to the retail world. There were column inches on these guys’ bold fashion choices, but not much in stores. But seemingly, the instant those Barbie set photos of Ryan Gosling as Ken leaked, there was a run on this color. Barbiecore may feel like a sudden “hot trend,” but it’s been bubbling on the back burner for over a year.

Over the years, we’ve been seeing more and more hot pink men’s clothing for sale, a trend that would have been unthinkable back in the aughts. To better understand this trend, we talked to some fashion experts about the origin of this phenomenon and the influence of Barbiecore on men’s style writ large.

How a Trend Is Created

To understand how hot pink became a trend, one must understand how any trend starts.  “A trend is something that happens organically, something that happens in the zeitgeist,” trend forecaster Sharon Graubard told SPY in an email. Graubard and her firm MintModa have predicted trends and studied trends’ birth and death for decades. “I don’t think a trend can be consciously or cynically ‘created’ on purpose, although sometimes an influencer, a designer, or the costumes in a film puts forth a look that captures the moment,” she explained. “Then, the pendulum swings because the eye needs to be refreshed.”

Why Hot Pink Is the Hot New Trend

Hot pink for men is new, fresh and different. According to Graubard, the color has been slowly making its way back into the spotlight. The last time the shade was this popular was in the 1980s, when both the New Wave and the dance scenes adopted hot pink and neon shades in general. Graubard noted, “These bright colors were due for a comeback, reflecting an interest in the Stephen Sprouse-era ’80s, including that era’s club scene and even graphics from that era, which used a lot of black and shocking pink.“

Beth Charleston is a fashion historian, author, curator and an educator at Parsons. She agrees with Graubard’s assessment of the rise of the hot pink trend and points out that retailers have had a hand in this for a few years. “The popularity of Vineyard Vines, the marketing that Vineyard Vines undertook to de-gender and therefore ‘normalize’ the wearing of pink amongst pre-teen and teenage boys, cannot be underestimated,” she said. “In 2016, Vineyard Vines sold for $476 million, reportedly valued at $1 billion by Goldman Sachs.”

Charleston also feels that other non-fashion factors came into play, including obscure influences, such as the popularity of The Disastrous Life of Saiki K, originally a manga by Shūichi Asō and then anime and a 2017 live-action film.

And, of course: rosé wine. “We might as well go there,” Charleston said. “The incredible popularity of rosé wines, originally marketed in the U.S. towards women. Then in spring 2018, rocker Jon Bon Jovi released Diving Into Hampton Water (rosé wine). If it’s cool enough for Jersey guy Bon Jovi….” Combine these various factors, and it was a matter of time before this color was again at the forefront.

While the hot pink fashion trend is now being referred to as Barbiecore, it’s been building momentum over the past couple of years. Lil Nas X and Jack Harlow famously sported Barbie-pink prison jumpsuits in the “Industry Baby” music video, which was released in July 2021.

What Makes Hot Pink so Appealing

What makes this hot pink slash Barbiecore so interesting is that the color is also the color of activism. “Beginning with the 2017 Women’s March when shocking pink ‘pussy hats’ came to signify the protestor’s battle cry,” Graubard explained. “Since then, intense pink pantsuits have been worn by the members of the Supermajority, a gender-equality advocacy organization with ties to Planned Parenthood. Shocking pink is a kind of weaponization of pink — a far cry from pink’s ‘girly’ or frivolous connotation. The original shocking pink, and even the color’s name, came from designer Elsa Schiaparelli, who introduced the bold color in 1937 as part of her surrealist, avant-garde vision.”

Returning to the twin rise of Barbiecore, Graubard mentioned how a film’s costumes might influence a trend, and once those photos were released, it propelled the trend.  She feels that the movie with Greta Gerwig’s “interpretation of the iconic doll through a feminist lens in the age of gender fluidity. With that, I’m assuming Barbie’s signature hot pink will take on a new, more powerful dimension.”

While Graubard feels that hot pink is “brave; it stands out and gets noticed,” Charleston thinks hot pink “connotes modernity and artificiality, or technology and science, which are considered serious and masculine — Neon Pink, Penicillin Pink.”

A Brief History of Pink and Menswear

For hundreds of years, gender didn’t come into play when dressing for men or women. Interestingly enough, pink was once named “light red.”  Gendering colors started to occur in the United States and the 1920s and then traveled to Europe. In 1940, Brooks Brothers made the first pink polo shirt. In the 1950s, Elvis was known to wear pink shirts, and by the 1970s, a light or bright pink Izod polo was part of many men’s wardrobes.

Pale pink eventually made its way into the average guy’s wardrobe, either as an accessory, i.e., ties or socks, or the occasional pink button-down and polo. With the advent of hot pink slash Barbiecore, pinks that range from flamingo to neon can be added to one’s wardrobe. The reason why this trend resonates deeply with people is that it’s an “aesthetic that somehow hooks into mass consciousness,” stated Graubard. She feels that many trends are occurring simultaneously, and the trick to wearing them is to choose items that speak to you. Pair a hot pink shirt with gray or black pants, or experiment with an accessory like sunglasses or a wallet. If you do a splurge, spend it on a well-crafted, well-tailored item.

The Best Hot Pink Menswear To Buy in 2022

You can dip your toe into this trend by adding home décor in this bright shade. You can also try underwear and outerwear too. Check out our guide of hot pink items you can wear now. We know that Nike will release a hot pink Dunk Low sneaker, but we have no idea when or how much they’ll be.

Feeling shy about wearing the trend? Start with a pair of socks. Let these cotton hot pink socks peep out from jeans or dress pants. They have a reinforced heel and toe. 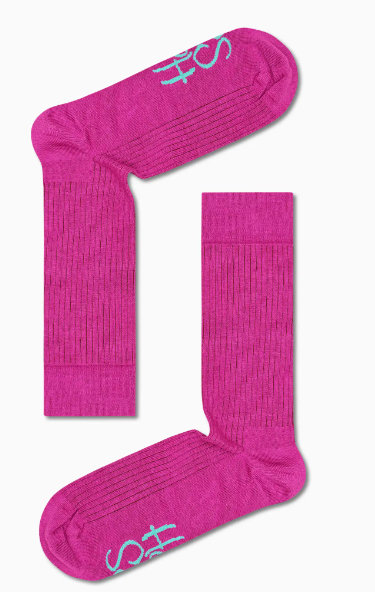 Part of Gucci’s collab or limited edition collection, these shoes, welp, at the price they’re above the designation “sneaker,” are all about the hot pink trend, with a dose of Adidas’ craftsmanship and comfort. They look like seriously upgraded tennis shoes, right down to the stripes and back of heel tab. 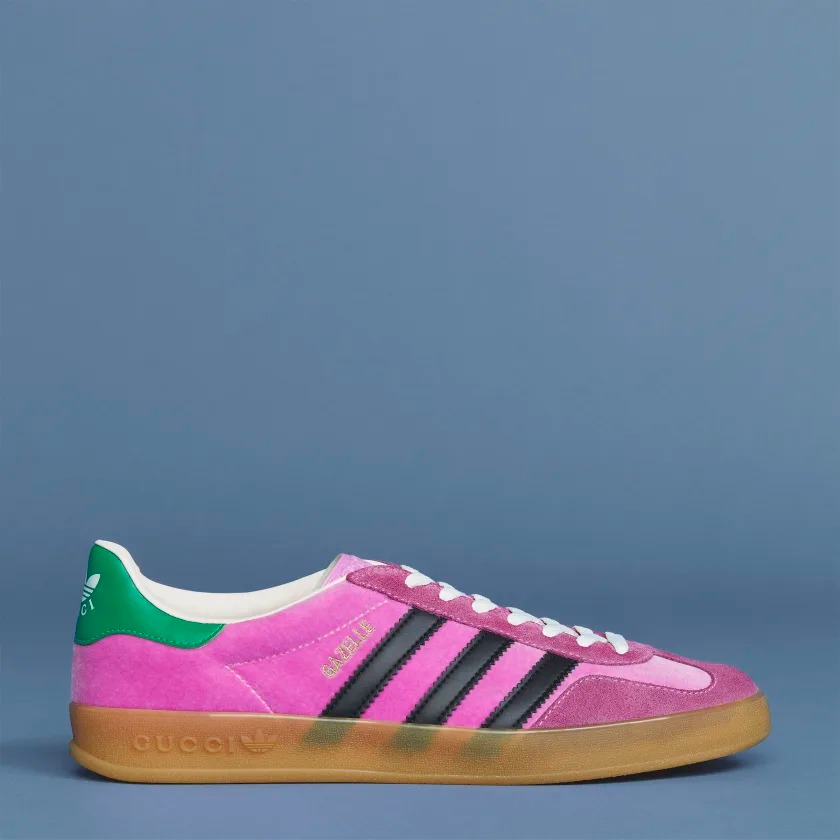 Spotted throughout Brooklyn, these unisex brightly colored high tops sneakers keep selling out. If they’re temporarily unavailable in your size, sign up for an alert for the restock. Yes, they’re that hot. You can create a custom pair if you can’t wait for a re-stock. 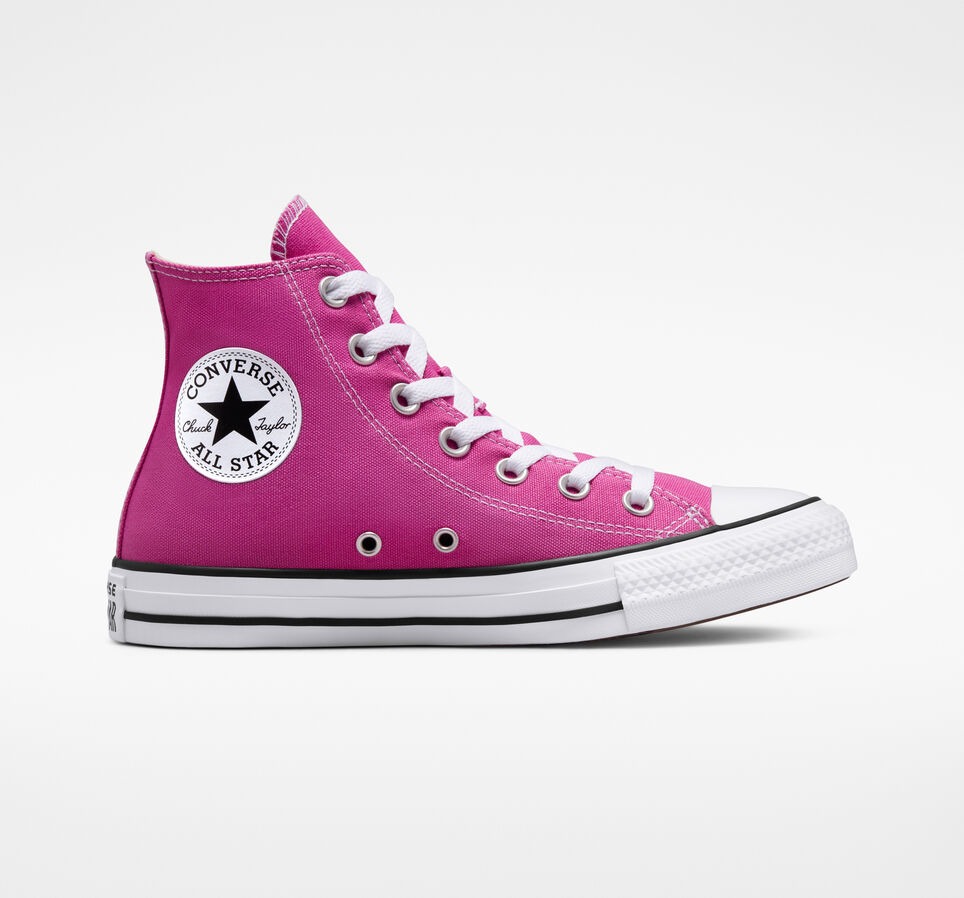 This floor-sweeping bathrobe has an open front and wide kimono sleeves. Perfect for feeling decadent after a long day at work. 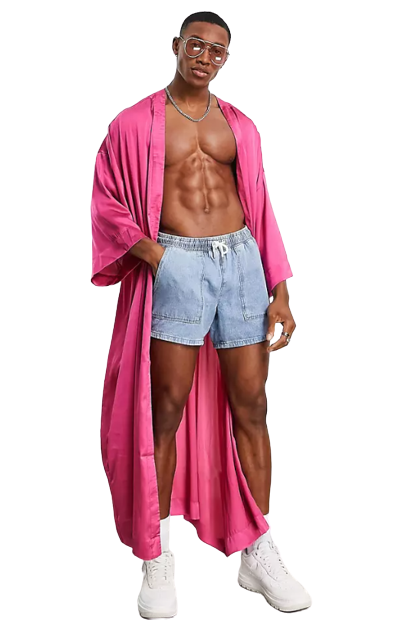 The go-to brand for preppy and classic menswear styles has embraced and used hot pink for years. This gingham button-down shirt can be worn under a dark blazer for work and paired with jeans on the weekend. By incorporating a trendy color in a traditional pattern, this shirt stays fresh for seasons to come. 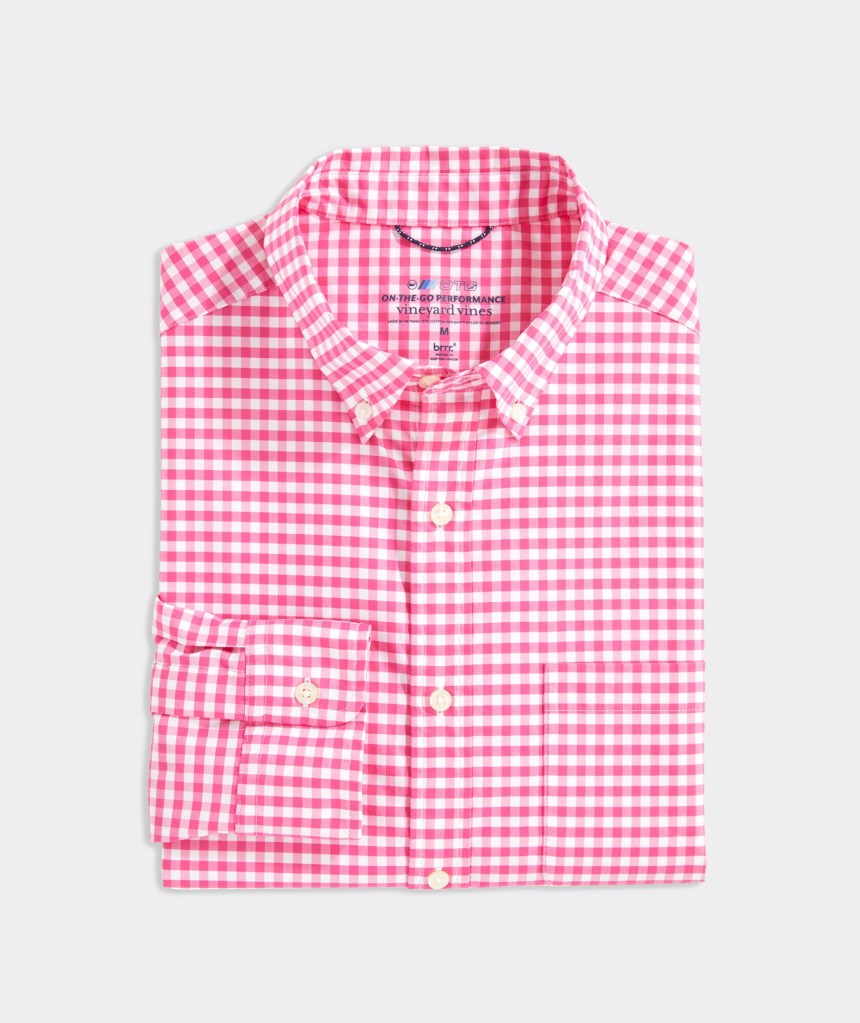 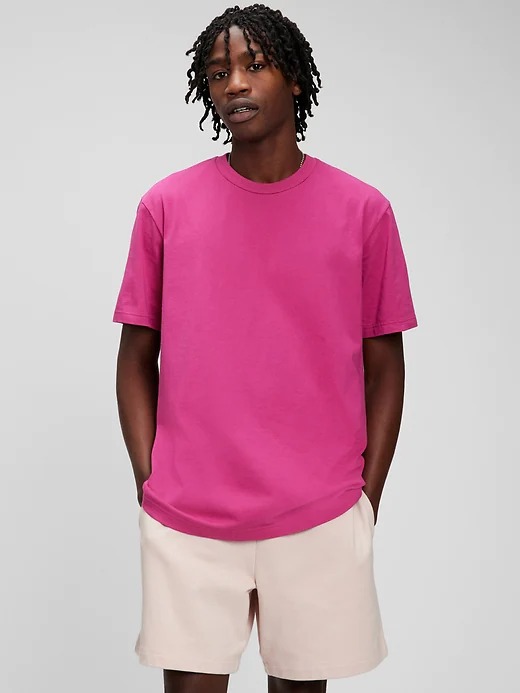 Courtesy of The Gap

For the price, this shirt is a great way to explore the hot pink Barbiecore trend. Made from cotton, this brilliantly colored polo can be worn every summer. 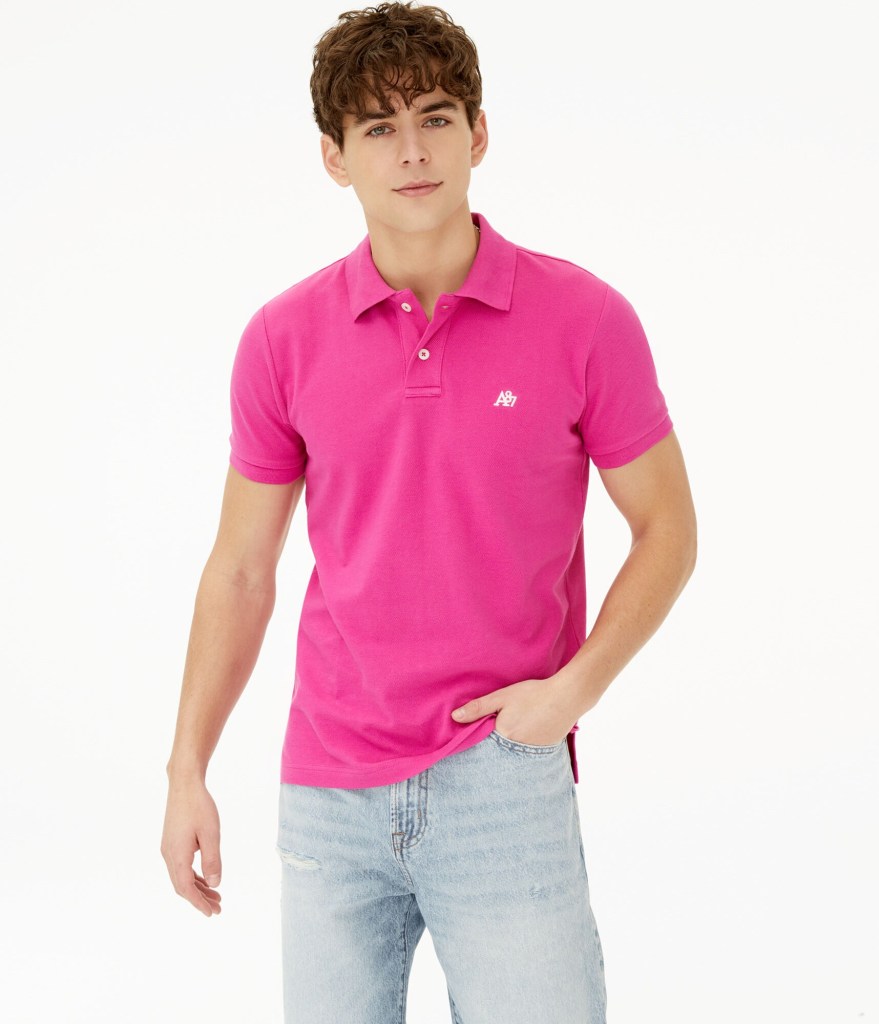 The label has always been fashion-forward and a great choice for guys who want to expand their wardrobe with something incredibly well-tailored and daring. This hot pink wool blazer has an asymmetrical front hem and a  straight back hem with a vent. Pair it with black or gray pants, or pick up the matching trousers to create a suit. 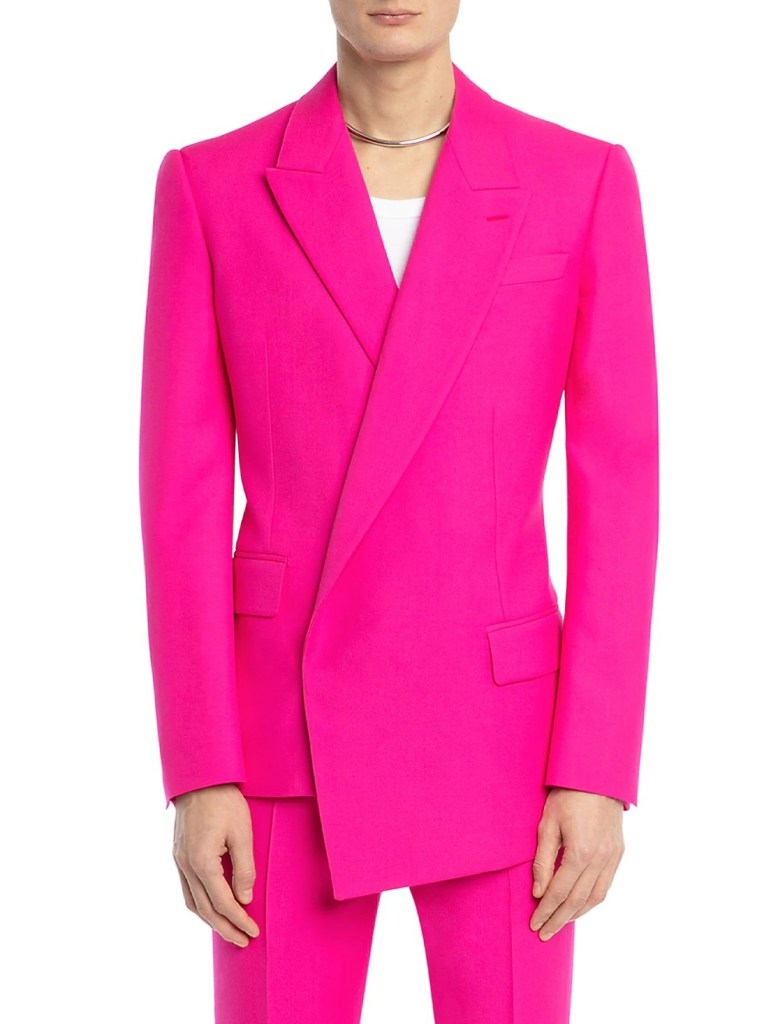 Unisex brand Pangaia creates super cozy, sustainably made clothing, and part of their mission (aside from dressing everyone in sweats) is to donate to various nonprofits generously. Their Reclaim sweatshirt is made from recycled and organic cotton. The front is hot pink, and the back is bright red. You’ll be eye-catching walking in and out of rooms. 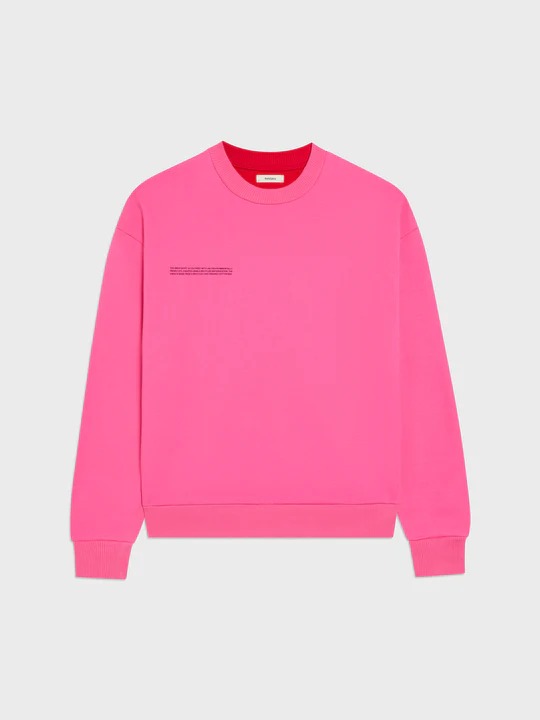 SPGBK stands for “Spring Break,” and this Black-owned watch company is based in North Carolina. This unisex hot pink watch is water resistant to 100 meters and has a 44mm stainless steel case, silicon straps and a three-hand quartz movement.

You can never have too many ball caps.  Polo Ralph Lauren’s five-panel sports cap is made from a cotton and polyester blend. Inside the cap is a sweatband to keep you looking cool while playing ball, taking a hike, or just going to the store. 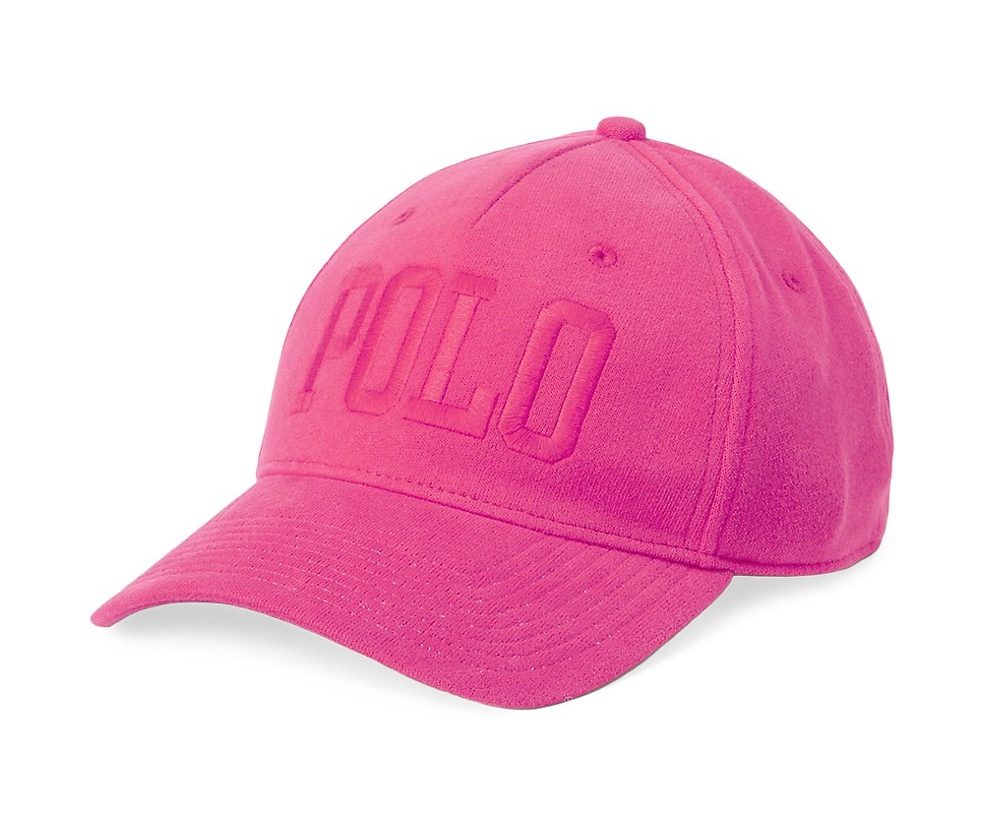 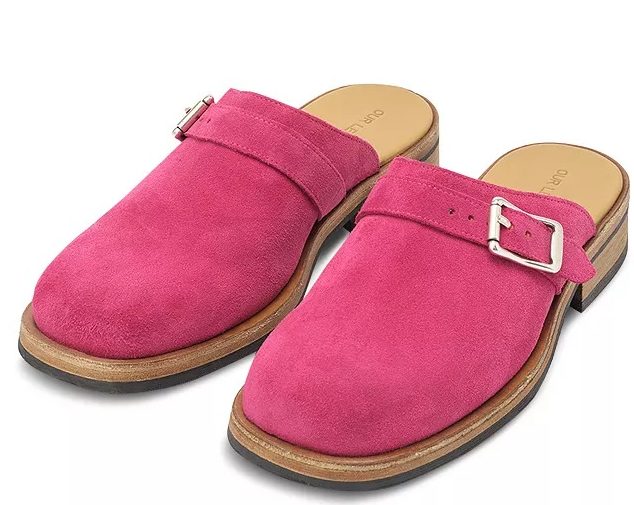 Nike has quite a few pink sneakers for men, including at least one pair of hot pink skateboarding shoes. However, their best Kenpink offering for Summer ’22 is this bright pink golf polo, which will certainly have you standing out on the course. 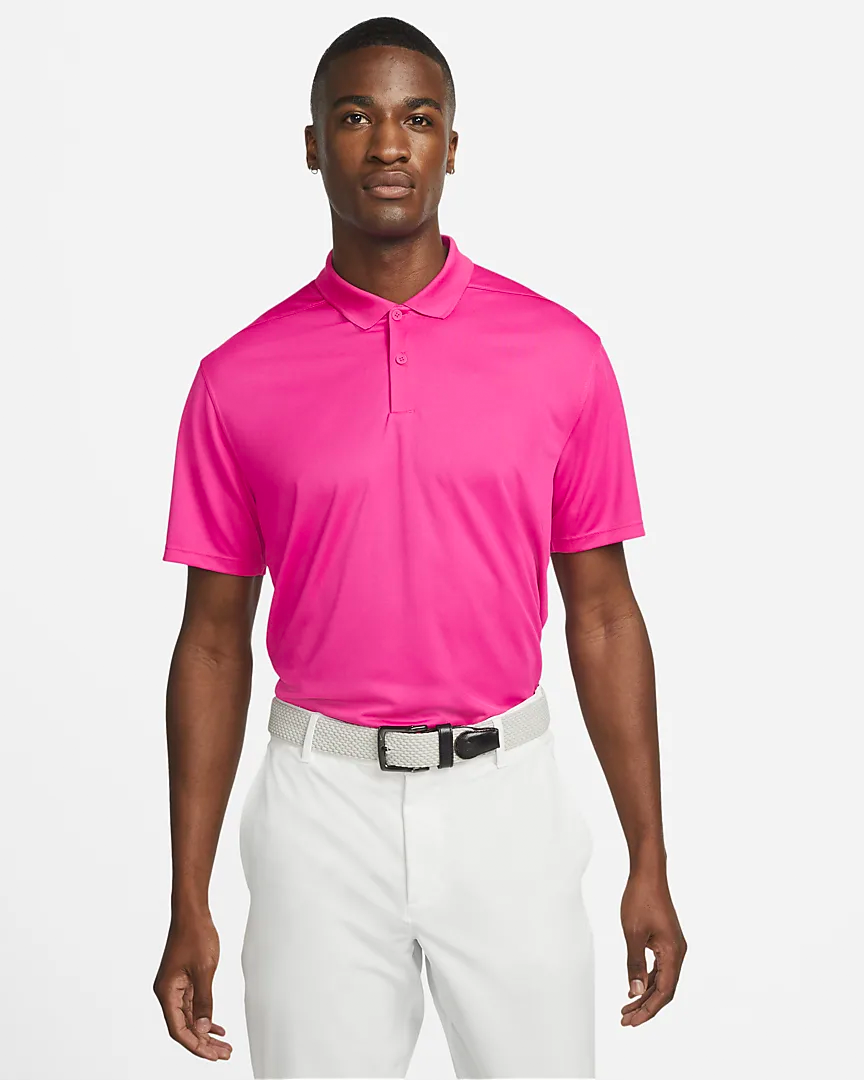 Hot pink is a lively color and can brighten up any room. If you’re thinking of redecorating and want to add a few touches or just one item that reflects this bright trend, we have a couple of things you can use.

Make your bathroom feel like it’s inside a tropical resort with this brightly colored towel collection. The towels have high loops, which means they’re super absorbent and soft. You can purchase every item in this collection: bath sheet to bath mat. 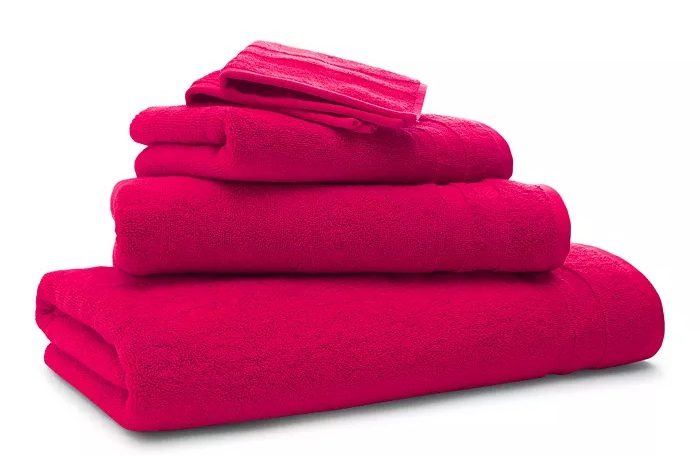 This handmade geometric print cowhide rug will bring a room together. It can be placed on the floor or used as a wall covering. It measures five feet two inches by eight feet. 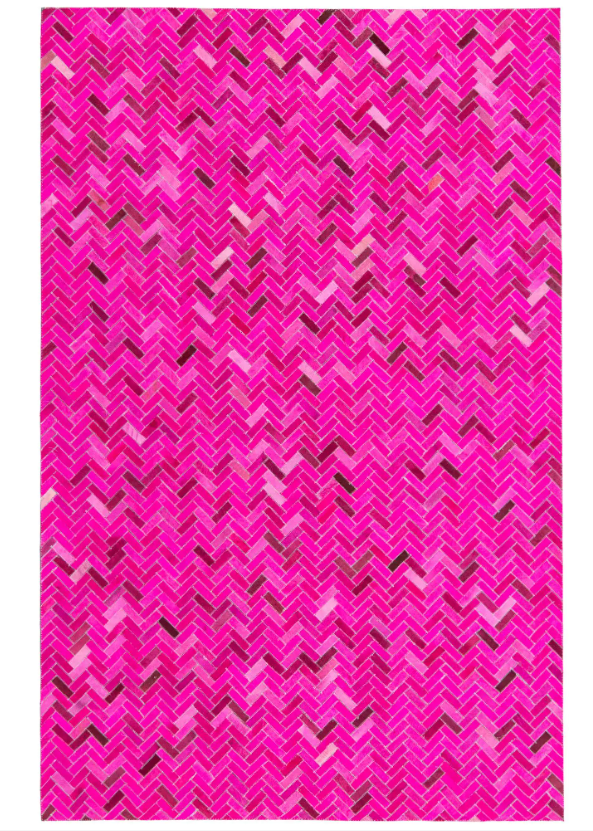 Inspired by Michelangelo’s famous “David” statue, this bust captures the pensive look of the biblical hero, all in brilliant neon pink. This handmade candle was created with soy wax and uses nontoxic dyes. It is six inches tall and has a two-hour burn time. 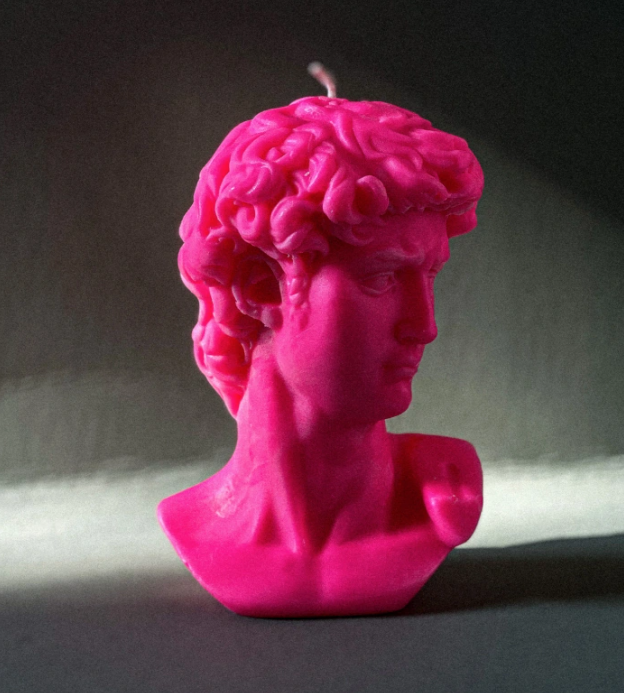 Courtesy of Wolf and Badger

Is the Y2K Fashion Trend Finally Coming for Menswear?