The best Halloween costumes are the ones that give you an opportunity to make a big entrance. Inflatable costumes allow for the biggest entrance — literally. By basically turning yourself into a balloon, you’ll be impossible to miss at the next company event or friend’s get-together. Sure, they’re ridiculous. But that’s the whole point of Halloween.

The most iconic inflatable Halloween costume is arguably the big T-Rex dinosaur, featured in countless viral videos and GIFs. And while the T-Rex will always be a reliable costume, there are plenty of other festive options.

Generally, inflatable costumes rely on a motor that blows air to keep the costume inflated. You’ll need to keep the motor on the entire time you’re wearing the costume. These motors are generally included, and they typically use four AA batteries, which usually aren’t included.

Trick-or-treating may be for the kids, but it’s no secret that Halloween is just as much a holiday for adults, too. After all, who doesn’t want to embrace their inner child by dressing up as a character (while also embracing their inner teen by getting a little too drunk)? That’s why there are tons of great inflatable costumes for adults. Most of the pop culture costumes on this list are officially licensed, too. These are some of the best ones to buy.

One of the most fun aspects of inflatable costumes is the ability to create optical illusions. This costume makes it look like you have tiny legs and are riding a bull (of course, the bull’s legs are actually your legs). The costume includes an inflatable bull and the hat, although you’ll need to add a denim shirt or similarly themed top yourself. 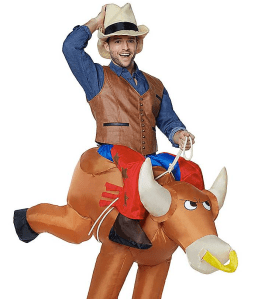 Let the Wookie win. Sure, you won’t be ripping any arms out in this puffy inflatable costume, but you’ll look every bit the part of the menacing-looking-but-lovable Star Wars character, Chewbacca. The fact that your voice will likely be muffled in this costume won’t be such a big deal, since no one speaks Wookie anyway. To quote Chewbacca, “ARRGGHHHWWW!” 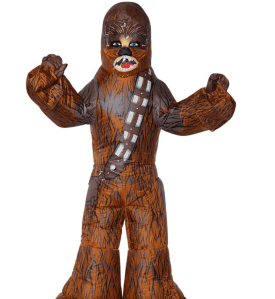 Inflatable costumes are unsurprisingly pretty cumbersome, and it can be hot to be inside one of them. If you’re looking for a lower-commitment inflatable costume, this Mario Kart costume consists of the cart that sits around your waist and is supported by shoulder straps. The kart and fan are included, though a shirt and pants are not. 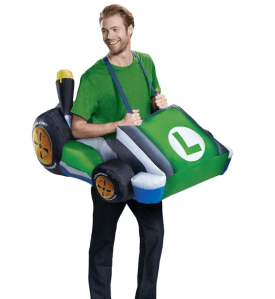 This inflatable T-Rex costume has taken on a life of its own online, but it’s a great costume IRL, too. It comes in two sizes and comes with a battery pack and motor to keep the costume inflated. The air and viewing window is discretely tucked below the head of the dinosaur, so it looks surprisingly realistic. 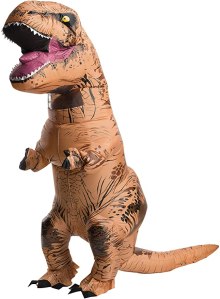 I don’t know about you, but I’ve always wanted to hug a bear. Of course, that’d be a disastrously bad idea, but they just look so cuddly. This inflatable bear costume from Spooktacular might be your best opportunity. 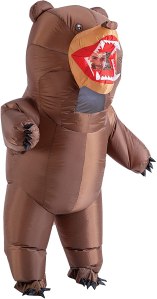 There’s something kind of freaky about a full-sized Pillsbury Doughboy. That makes this the perfect scary costume, albeit unintentionally so. Imagine making your way through a haunted house, easily dodging the zombies, mad scientists and wraiths to come to one final empty room and it’s just him.

There are horror-comedies that are more well known, but there are arguably very few as beloved as the cult-classic Gremlins and Gremlins 2. This adult-sized costume replicates Gizmo, the lead Gremlin from the series. It’s available in one-size-fits-most sizing. 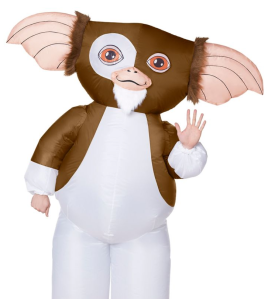 Step aside, Bezos and Branson. This costume lets you blast off into space, all without making you come off as a megalomaniac Bond villain (or maybe Blofeld is what Jeff Bezos is going for?). 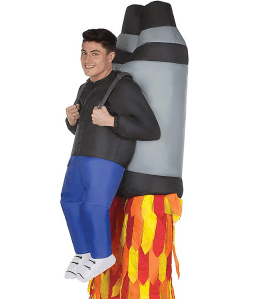 Frankly, who wouldn’t want to be a Wacky Wavy Tube Guy? Always smiling, always dancing. Well, this is your chance. This costume from Urban Outfitters is available in blue, red or orange. Like most options on this list, it includes a battery pack and blower that you’ll need to load with 4 AA batteries. 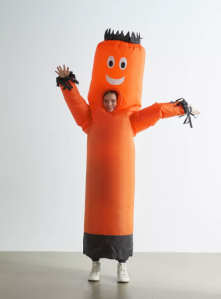 Another great pop culture costume is this inflatable King Kong costume. Technically, it’s a “giant gorilla” costume, since it’s not a licensed product. Still, everyone will recognize the iconic scene of King Kong ascending the Empire State building. 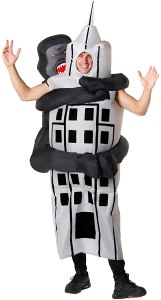 We’ve always been fascinated with aliens, and the depiction of aliens as little green men has been around for decades. But alien mania has reached a fever pitch in recent years, including the military disclosures of UAVs (or as we might call them, UFOs). If you want to be part of an alien abduction, this is the costume to get. The alien also looks like he’s performing the Heimlich. Either option is hilarious.

Buy Now on Amazon
Forget the Pumpkin Spice Lattes, These Are the Pumpkin Beers You Need to Try This Fall